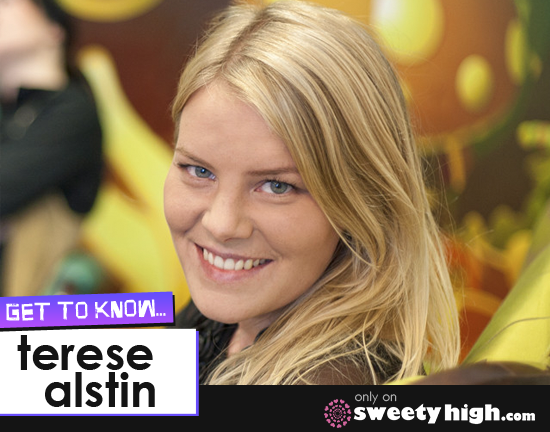 We recently spoke with Alstin about the story behind the helmet, and the difficulties that face a young female entrepreneur!

Terese Alstin and Anna Haupt began their project by conducting a lot of market research. They started their master thesis in January 2005.

"We spent time talking to bicyclists who would refuse to wear traditional cycle helmets for many different reasons," Alstin said. "There was this one guy who said, 'I think it would have to be invisible for me to want to wear it.'"

It was this comment that really got Alstin and Haupt's gears spinning.

"It seemed like the perfect solution," she said. "An invisible bicycle helmet. Who wouldn't want to wear it?"

Many of the reasons people refused to wear bike helmets were related to vanity, Alstin explained. The biggest complaint was that helmets would mess up riders' hair.

"That inspired us to think of a solution where the helmet itself would not be placed on the head, but just pop up in case of an accident," she said. "That's what got us thinking about airbag technology."

Airbags remain hidden until they are needed. Only then do they deploy. The duo realized their product could work on the same principle.

Brainstorming for their concept took about a month.

"Brainstorming is always a long process," she said. "You need to let yourself think outside the box and not be negative at all, just come up with as many solutions as possible for this particular problem. Brainstorming should be very free. You shouldn't think about how to solve everything. Instead, you have to think of radically new solutions that will take care of the problem."

Only once a strong idea was developed did the process move on to the next phase to figure out the technical aspects of how the product would work.

When word about Alstin and Haupt's innovative helmet concept started to spread, reactions were quite mixed.

"Many people's responses were completely positive, seeing instantly the potential and the need for a product like that," Alstin explained. "Those were the people who would inspire or motivate us to take it further, and who would help us to start a company and get connected to anyone who could help us in getting further."

On the other hand, there were the skeptics.

"There are people who think it's much easier to say no than to say yes," Alstin said. "There are people who say that if it were possible to make, someone else would have done it already. There will always be people who are skeptical when it comes to new and radical ideas, but somehow you just need to understand that when you developing completely new ideas and products, no one else can be more of an expert than yourself."

For Alstin and Haupt, the key to success was staying confident despite the detractors.

"There were low points, when we were looking at each other thinking, 'Is this it? Is this as far as we can get'" Alstin said. "But I believe it helped us a lot that we were two people, and not one."

"Being part of a team means there can be a yin and yang," she said. "You need to become the one who motivates the other when that person is feeling negative or having a bad day, and vice versa. There was always one of us who would push the other one further, and that could switch from one day to the next. Being a team prevented us from giving up."

In November of 2011, after nearly seven years in development, Alstin and Haupt finally had a CE marked and finished product.

Alstin said that being a young female entrepreneur in the very male-dominated industries of safety and cycling made getting to that point even more of a challenge.

"We thought more than once that it would be a lot easier if we were two guys inventing this," she said. "But then again, many people have said that you can see that there are women behind this product, because a man would never think of this."

Alstin believes that, as two women, she and Haupt were able to offer a new perspective on how to create cycling helmets.

"It's been a male-dominated industry, and I think that is part of the problem, and why there has been so little development in bicycle helmets for so long," she said. "Something new, and someone who would just turn the idea of a bike helmet around was definitely needed. Maybe we were able to do that because we're two young women, or maybe it was just a combination of our personalities."

Next, Hövding will be expanding to more markets.

"Coming up next is Japan, but we're also longing very much for the U.S. market," she said. "We've had huge publicity there, with people calling us all the time, asking when it's going to get there, and if there's any way to speed up the process."

However, it takes huge resources for a small company like Hövding to enter a new market.

"We're going to have to take it one step at a time and get into more and more markets as soon as we can," she said. "It's all a matter of resources."

After than, they two hope to be able to launch even more innovative products!

To learn more about Terese Alstin, Anna Haupt and Hövding, check out their pages below! You should also join us at SweetyHigh.com to tell us about your favorite innovations made by women!