Abby Goldberg is a 13-year-old activist whose efforts helped to veto a bill that would prevent plastic bag bans throughout the state of Illinois! 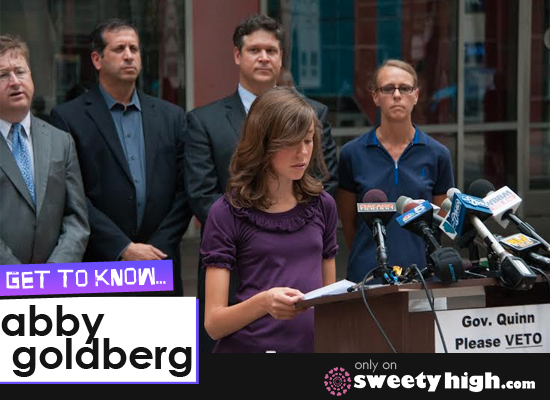 We recently spoke with the young environmental advocate about what inspired her and how she worked to make a change!

"In order to graduate I had to design a two year project that helped my community and helped the environment," she said. "This was a culminating project to reflect on all that I had learned."

For her project, Abby was motivated by the fact that she lives less than a mile from a landfill. She said that on windy days, a temporary fence is put up around the landfill to catch the thousands of plastics bags that escape.

Abby came to understand that these bags were a big problem, but she knew that something could be done about it.

"I started to realize that our choices matter and that we are all connected," she said.

"Most people don't even know that plastics are made from non-renewable resources," she said. "They are either made from a byproduct of natural gas or oil. There are huge problems with drilling for both."

Secondly,  plastic bags can cause harm to animals. For example, the spring before Abby started her project, she and her family traveled to Florida to visit a turtle hospital and rescue facility.

"I saw pictures of turtles that died because they thought a plastic bag was a jelly fish, their favorite food," she said. "So when I needed to decide on a project, I started to connect the dots. I love animals and was pretty upset about the harm plastic bags cause."

A plastic bag is generally only used for about 12 minutes, but there's a huge potential for them to cause harm to living things.

"An animal may die thinking it's something they can eat, all because I needed to bring something home from the mall," Abby said.

"Litter is also an eyesore," Abby said. "Plastic shopping bags have only been around since the early 80s and most adults I talk to remember a time when plastic bags were not on the side of the road, stuck in trees or floating in our oceans. I don't remember a time when they were not part of the landscape. Do you?"

She added that in other countries, plastic bags can contribute to flooding.

But the biggest plastic bag issue, she said, comes from when plastic bags degrade into small pieces of plastic and end up in our rivers, lakes and oceans.

"For some reason these bits attract toxins like pesticides that then make it into our food chain," she said. "Plastic bags are a symbol of our addiction to single use disposable products."

Abby's school project set out to create a local ban on single-use plastic shopping bags in her hometown of Grayslake, Illinois.

Before her project could get off the ground, plastic bag makers and the chemical industry got involved. Before long, they helped a bill get through the legislature in Illinois to eliminate bag bans across the state.

Abby didn't learn about it until the bill had passed in both the Senate and the House. The issue only gained press when other environmental groups caught wind of the ban and spoke out against it.

"If the bill was made into law, no town in Illinois would be able to have a bag ban if they wanted one," Abby said.

At this point, Abby's project was still in its infancy. She had done some research on plastic bags, but was still in the middle of coming up with a creative campaign to make the issue known to her town.

"Within a matter of a few months of starting, my project could have been over and I would have had to think of something else to do," she said. "For a few days I was pretty upset. But with the help of some other dedicated activists and environmental groups, I got reenergized."

Along with those other activists, she realized that real change could be made if other people got as concerned about the issue as she was.

Abby soon learned just how complicated this battle would become.

"Actually, a village board member was already trying to encourage me not to even pursue a ban because there would be no support for it," she said. "He tried to convince me that it would be best to educate the public about recycling plastic bags. And, that was what the bad bill was all about."

Abby realized this was about a lot more than just the environment. It had become a political issue.

As a 12-year-old girl, Abby struggled to understand why people cared more about companies than their planet.

While the bill's sponsors told Abby they were concerned about the environment, she didn't see the proof in the bill.

"To keep everyone happy, goals were set to increase the recycling of bags, but bans would be against the law," she said. "This way retailers would never have to deal with different local ordinances regarding plastic bags or supposedly lose customers, bag makers could still make bags and representatives would feel good THINKING they were helping the environment."

With the help of lobbyists, bag makers planned to convince the citizens that just raising awareness about recycling would make all plastic bag litter disappear.

Abby said that a similar bill is currently being considered in California.

"A compromise is being reached where thicker plastic bags with recycled content will not be banned while thinner t-shirt plastic shopping bags will be banned," she explained. "If the bill is made into law, I believe no community can then pass their own more restrictive law on plastic bags."

She said that bag makers and the chemical industry never tried to stop her petition. Instead, they used their money and power to sway the government to tell the community what to do.

When it came to get people to sign her own petition, Abby said the cause spoke for itself.

"Social media did the work for me," she said. "Change.org also has their own network that they can send your petition out to. With the help of Facebook and Twitter the petition spread pretty quickly."

She added that interviews with local magazines and newspapers also helped to spread the word, as well as help from other activists.

"Once people understood that it just wasn't about plastic bags and that it was more about a 12 year old fighting influences on our government, then I got even more signatures," she said.

A massive online community of social and environmental activists helped share the petition and get it in front of more eyes.

"With a click of a button you can sign other petitions, get someone's message out there or educate a few hundred people at once," she said. "We all help each other spread the word. It was so cool to get so many signatures, especially from people all over the world who are also wanting to help the environment. I have so many new friends!"

As the deadline for the veto approached, people assured Abby that the governor to Illinois, Pat Quinn, would veto the bill. Abby didn't know for sure.

But Abby knew that she had made a difference when she got a call from Governor Quinn. He told her over the phone that he would veto.

"It was down to the last day when he called the house," she said. "I was really surprised he would take the time to call me, he really didn't need to! In my mind all he had to do was veto the bill and I would have been so happy. I also felt a huge weight lifted off my shoulders."

While many people believe that kids are too young to make a change, Abby is proof that anyone can make a difference if they believe in a cause enough and work toward making it a reality.

She added that kids can be instigators of change because they have a different perspective on the world.

"We can tell it like it is," she said. "We don't have any outside influences. Kids can make a difference because we can be passionate about something just because we want to."

Other times, kids feel like they can't change the world because adults said so.

"I experienced that," Abby explained. "Luckily I have parents who encourage me and some other adults who helped me out and listened to me. They knew I was passionate about this issue. We don't have money, we don't have lobbyists working for us, but we have lots of voices."

Without too much effort, you can make a difference, too. Abby said that the biggest help in reducing the use of plastic bags is to bring your own reusable bags when you go shopping.

"It doesn't have to be a fancy or expensive bag," she said. "You can make bags out of old t-shirts, you can use a backpack or even a box."

Abby said that people have a habit of letting cashiers waste a bag on a single item at the grocery store. Instead, of using the bag, you can easily carry one or two items by hand.

"Be a leader," she said. "When you use your own bag or refuse a plastic bag, maybe the person behind you in line will think to themselves that they should be doing the same thing. Be the change you want to see in the world!"

Abby said that the biggest reason plastic bags are such a big issue is because she doesn't understand why they are still so prevalent.

"Why do we still use them if they have such a devastating effect on our environment?" she said. "All kinds of adults can give me all sorts of excuses, but they are just excuses and don't put our earth first. We should be able to make a difference, we are the future care takers and leaders of the world."

Abby's plans are to continue advocating to stop the use of plastic bags. Even if she can't ban them in her community, she still wants to educate everyone she can about why they are so harmful.

"I have met other kids on Facebook who are also working on bag bans," she explained. "It's a place for ideas and discussions. I hope to continue speaking to school groups about plastic bags and kid power."

She recently spoke at an environmental group meeting, and set up a booth at a local green fair.

She is also working with activists who have formed a coalition to shape a better plastic bag ordinance in Chicago.

"Last summer I traveled with 5 gyres on a sailing expedition to the Atlantic to study plastic pollution," she said. "It made me really think about becoming a marine biologist!"

"Although not the ordinance everyone was hoping for, I am hopeful that it will get more people to use reusable bags," Abby said.

Abby and other activists were hoping not only a ban, but also for a fee for paper and compostable bags.

"These bags have their problems too," she said. "A fee would make sure not everyone just switches to free paper bags and remembers to bring their reusable bags."

We hope that Abby Goldberg's work can continue to create change and inform the world about the harm plastic bags cause!

To join Abby in her cause, find her on Facebook here. You can also join us at SweetyHigh.com to tell us about the causes you are passionate about!