Presley Alexander is an 8-year-old vlogger, gamer and science fiction fan who uploads daily videos on her vlog, actoutgames. 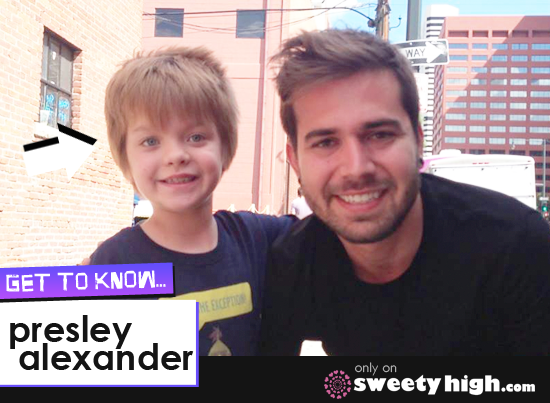 We recently spoke with Presley of actoutgames about what inspired her to share her story on a daily basis, and the things she is the most passionate about!

Presley Alexander was first inspired to vlog when she started watching daily vlogs on a channel called CTFxC.

"I was watching them every day," Presley said. "Eventually we just said, 'Why not do it ourselves? There's nothing they're doing that we can't do.'"

Presley didn't have any reservations about getting in front of a camera to share a little bit of her life with the world every day.

"I have never had stage fright," she said. "I was always a really outgoing person, and I was never shy. I never had any problems in front of a camera."

Being a daily vlogger means that Presley has to come up with a new topic for a blog each and every day.

But thinking up an idea for a daily vlog can sometimes leave Presley and her dad stumped.

"It happens so often," she said. "It takes us forever to find out what to do for a vlog sometimes. Sometimes it takes until 9 o'clock at night."

Sometimes, she replicates something cool and fun that she sees on another vlog that she follows.

"We're always wondering what would make a good vlog," she said. "What would make people watch this? We definitely do have trouble coming up with them but sometimes we just go and do something fun and that makes a good vlog."

Her biggest vlogging inspirations include CTFxC, Shaytards, Hank and John Green, Smarter Every Day, The Brain Scoop and more.

Presley has learned a lot about how to enhance her own channel by watching her favorite vloggers.

"The main thing I've learned is to be yourself," she said. "If you be yourself, you'll get the right viewers for you. Don't change yourself to get more viewers."

Presley is also a big fan of gaming, and often reviews video games for her vlogs. A couple of her current favorite games are Minecraft and The Sims 3, but she's also a big fans of games like The Last Of Us and Assassin's Creed.

"We lived in Hawaii, and I used to speak Japanese to the tourists when I was really tiny," she said. "We'd go to the zoo and my favorite animal was the hippopotamus, so I'd say, 'Kaba, kaba!' which means hippopotamus in Japanese."

Since Presley watches a lot of anime, her lessons are geared to teach common anime words and phrase. In the future, she hopes to introduce mnemonic devices, or learning techniques that aid in memorizing information, to her Japanese lessons.

"We go to about eight cons a year, so it's a really big part of my life," she said. "I love cons and I have done a lot of cosplay."

Presley attended the convention dressed as an "empty child" from the Doctor Who series. She also had the chance to interview other cosplayers for her vlog.

She even appeared as an extra in a film that was being recorded at Starfest!

"I was just an extra in line, but it was still really fun," she said. "That was my first official acting."

When Presley cosplays, she and her dad try to create costumes for her that recreate characters that are her actual size.

"That way it's really believable that I'm them," she said. "It's really hard to pick an outfit to wear to a con. I want to wear all of them."

Presley has about eight different outfits to choose from, and sometimes changes costumes often during these conventions!

Just this month, Presley reached the one year anniversary of her daily vlog! She said that she has trouble believing it's been so long. It's only felt like a few months.

"At first we were only going to do it for 50 days to get to VidCon, then we decided to try for 100, and now it's been a year and still going strong," her dad, Brian, explained.

Presley believes it's quite the accomplishment. Not many people manage to vlog daily for more than 365 days in a row! The milestone gives her real YouTube cred.

Despite all that, Presley believes that anyone who has something to say something has the capacity to vlog.

"Be yourself, like I said," Presley advised. "Also, you don't have to vlog daily. You can do weekly, monthly, you can do it whenever you want. And ignore the haters. It's not about them, it's about you."

Though Presley is homeschooled, she said she has the best teachers in the world.

"They are Hank and John Green, Smarter Every Day and The Brain Scoop," she said. "They all teach me so much and I don't go to real school for it."

Presley is becoming well-known at conventions for being such a young member of these awesome communities. She thinks it's amazing to be able to meet people of all kinds who care about the things she does.

She also added that you should never be afraid to be passionate about the things that you love.

"If you're in a fandom or if you like something, there's probably a con and a web community out there for you," she said. "Look it up and find it. It's great to be a part of those communities, where it's fun and you're supported. It doesn't matter what you like."

Keep up with Presley Alexander's daily whereabouts on her YouTube channel actoutgames here! And if you're curious about creating a vlog of your own, why not start on SweetyHigh.com?