When it comes to vegetarian and vegan versions of my favorite foods, I'm down to try anything at least once.

For every plant-based burger I've tried that's absolutely tickled my tastebuds, I've had one or two that I found practically inedible. So, when the team behind Actual Veggies and their 100% vegetable-based burger patties reached out to me, I was curious to see which camp they'd fit into. After getting the chance to taste them all,  I can say that anyone could fall in love with these unusually tasty veggie patties.

Actual Veggies specializes in thick, fresh "hamburger" patties made with healthy and colorful vegetable ingredients, which are designed to be filling as well as totally delicious. They're each made with pure, recognizable veggie ingredients, plus spices, so these burgers have nothing to hide.

They come in four unique varieties, each sporting a different color and flavor due to the included veggies. Each quarter-pound patty contains between six and eight grams of protein, and seven to 10 grams of fiber, with no saturated fat, no preservatives and no filler. The plant-based patties are also completely free of gluten, soy and nuts. Being made from veggies also means these use up 96% less land and 89% less water—plus give out 90% less carbon dioxide emissions—than a traditional beef hamburger.

I began my Actual Veggies adventure with the Actual Green Burger since the green patty was the most unusual-looking. These arrived frozen, and while the packaging recommends allowing patties to thaw in the fridge before cooking in a pan, I was excited to try them, so I cooked it straight from frozen. All I needed was a little hot oil in a pan, and I cranked the heat way up to get a good sear on the first side.

I followed the directions and cooked it for about five minutes, and when I flipped it, it looked quite charred, like I'd burnt it. I decided to turn the heat down a little bit and go for less heat on the other side, and that bit looked nice and browned. Once it seemed ready, I threw it on a brioche bun with some garlic aioli (recommended on the back of the package) and took my first bite.

What I discovered was that I hadn't burnt the burger at all—the crispiness and flavor were actually perfect on the more charred side, and all of the flavors complemented each other to make for a super delicious sandwich. It didn't taste like a beef hamburger whatsoever, but that didn't matter. Its blend of kale, broccoli and spinach was perfectly balanced with garlic and spices, reminding me of a delicious creamy garlic veggie dip in burger form. It was so good I repeated the recipe the following day, and it had me really looking forward to trying the rest of the Actual Veggies collection. 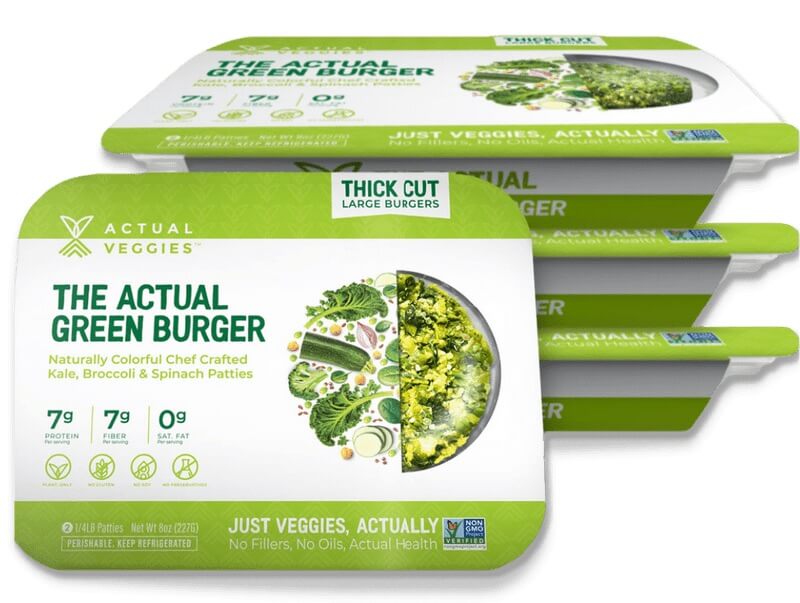 Next, I turned to The Actual Black Burger. I followed what I'd done the day before, making sure the sides were nice and crispy, before putting it on a bun with some spicy ketchup. Again, the outsides were crispy, and the center was soft and hot. This burger was made with black beans, onions, red peppers and carrots, and I found its flavor pretty familiar. I've had a number of bean-based veggie burgers in my time, and while I much preferred the texture of this one, it tasted pretty similar to the others. If you're used to bean burgers, this one probably won't blow your mind—but with its better-for-you ingredients, it's still worth trying. 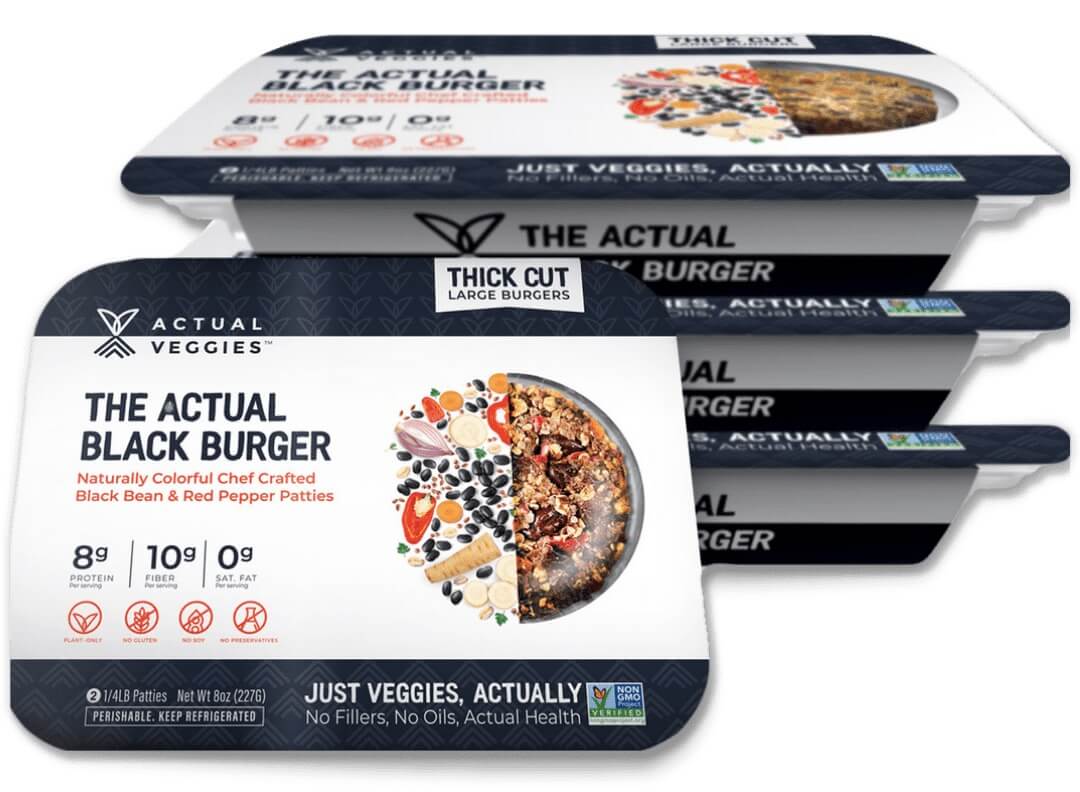 Once I'd finished my Actual Black Burgers, I went for the Actual Orange Burger next. I was very excited to dig in because I can't get enough of sweet potatoes, and once I'd fried up this patty of sweet potato, carrot and red pepper, I put it on a bun with some Japanese mayo and hot sauce and took my first bite.

While I didn't love this one as much as the green, I really did enjoy the sweet, hearty and earthy blend of sweet potato and carrot in the burger. This one was a bit like eating a giant, crunchy sweet potato fry, with all kinds of tasty seasonings, and I savored every last bite. 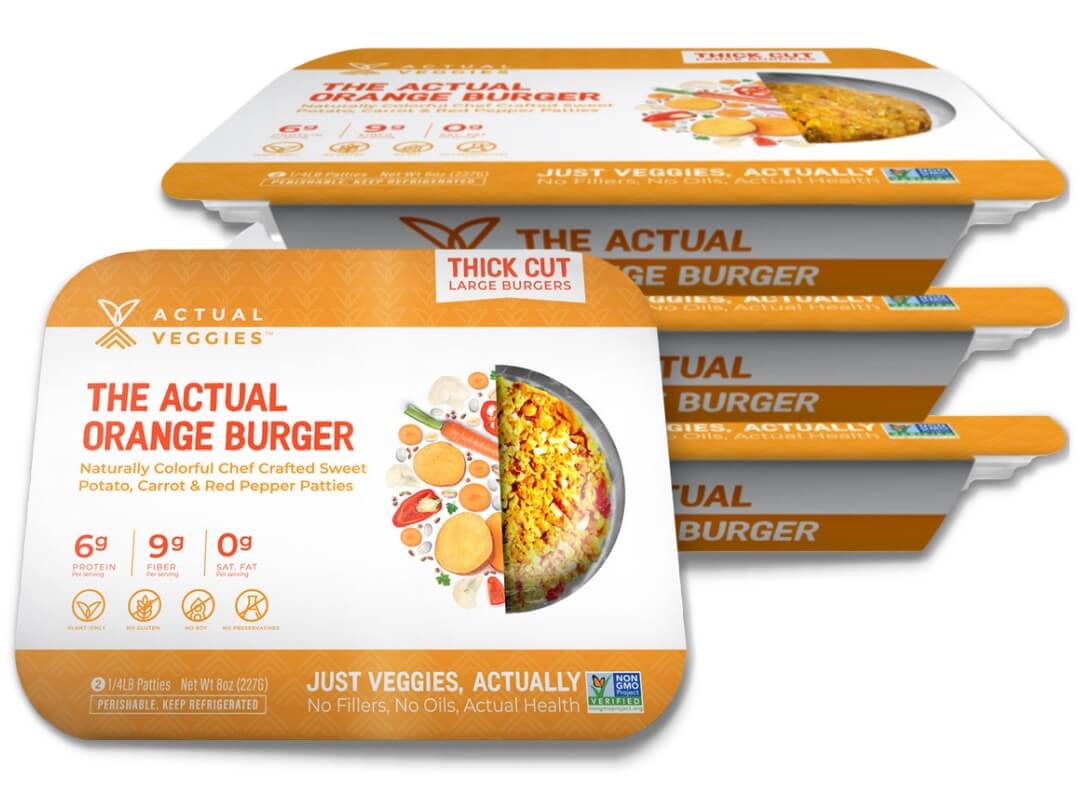 And last, but certainly not least, was the Actual Purple Burger, made with beets, carrots and onions. For me, beets can be hit-or-miss, so I was curious to see how I'd like them in this final burger. Once I'd cooked it, I again put the patty in a bun with Japanese mayo and a different flavor of hot sauce, and was really pleasantly surprised with the flavor.

While beets can sometimes be a bit bitter, this burger doesn't taste bitter whatsoever. Instead, it captures the earthy, wholesome flavor of the beet and elevates it with garlic and black pepper to be super palatable—and somehow not leave a red, sticky mess behind when you cook it. 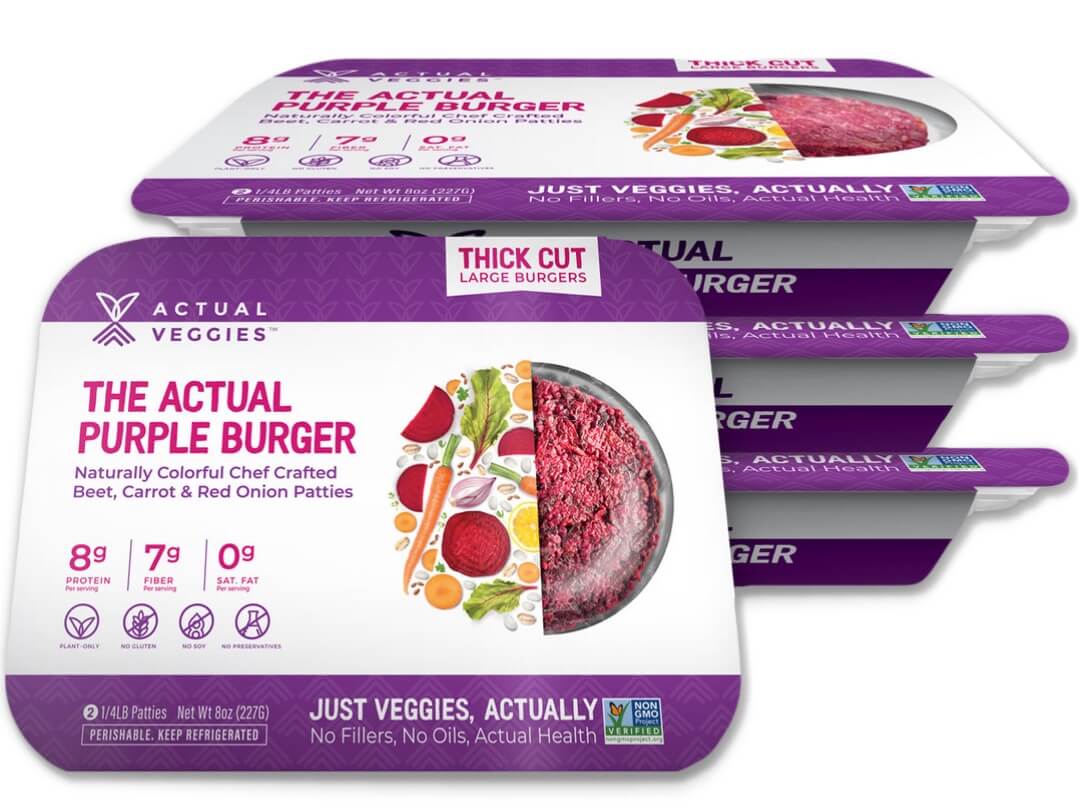 Whether you're a plant-based eater or are just looking for some healthier, flavorful and more sustainable options when it comes to burgers, Actual Veggies is for you. Flavorwise, they're legitimately my favorite Veggie Burgers, and I think they benefit from not trying to taste like a classic, beef-based burger—especially when you know which condiments and toppings to enhance the flavor even further. If there's one downside, it's that they're quite expensive at about $ 5.83 to $7.50 per burger. However, you'll likely still save money compared to going out to get a veggie burger, so it's kind of a win-win.