Love music that rocks hard and makes you laugh? Adam and the Metal Hawks has you covered, and then some.

The hard rock band, made up of singer Adam Ezegelian of American Idol fame, plus guitarist John Barry, bassist Ryan Daversa and drummer Alex Hertler, has quickly become one of our favorite acts on all of TikTok thanks to their musical prowess and passionate, sometimes hilarious, performances. Their more than 3 million followers tell us we're far from alone—and here's everything we learned about the band as our latest Man Crush Mondays. 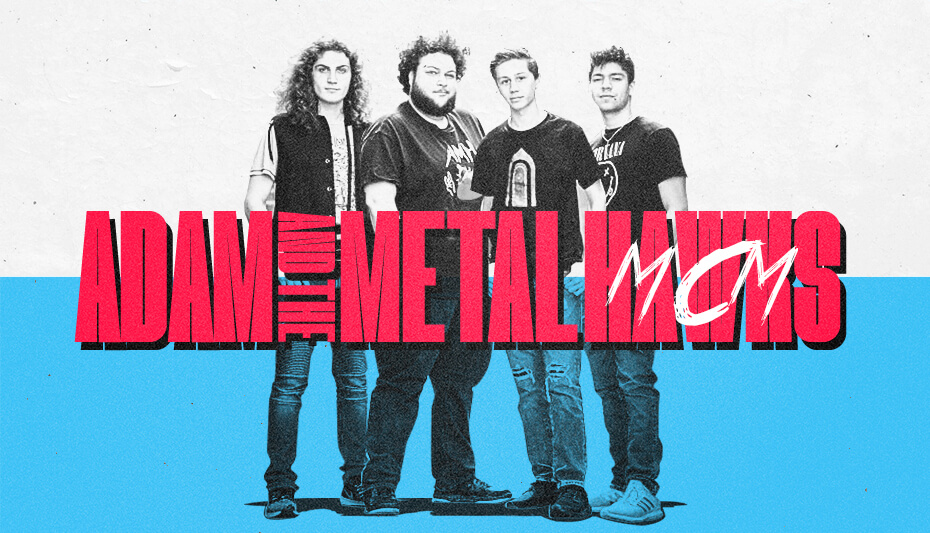 1. Adam says his biggest character quirk has to be his big personality.

"I'm always looking for a joke to make in any given situation, and I have some big hair to match. I just want to make people smile and enjoy themselves."

2. John has a pet Goldendoodle called Buddy (the elf).

"If it's in a controlled place, it doesn't bother me, but if I walked in the house and saw a giant hairy guy looking at me, it's not my house anymore."

"Geddy Lee is a monster playing bass, keys and singing, Alex Lifeson is a great guitarist who's often underrated, and of course the greatest drummer in the world, Neil Peart. Their songwriting has always been amazing and they had different sounds throughout the years. Not only were they three of the greatest musicians in the world, but they were also really close friends. That's what I aspire to be as a band member, writing amazing music with amazing friends! R.I.P. Neil."

5. Adam's favorite singers are Aerosmith's Steven Tyler, Queen's Freddie Mercury and Guns and Roses' Axel Rose, and he considers Jack Black to be a huge influence and inspiration in general.

"I love his confidence and ability to just go for it and not care what other people think."

"One movie that always makes me burst out in tears is Dumbo. It's one of my favorite childhood movies but It's straight-up depressing!"

7. Alex isn't really watching any TV series at the moment, and while he's really enjoyed Stranger Things, The 100 and Supernatural on Netflix, he's more of a Disney+ guy.

"Extremely hyped for The Book of Boba Fett, though!"

"They can be cute and friendly-looking at times, but are also one of the most aggressive and dangerous animals out there. A big crazy beast just like me! Special shout out to sloths, also."

10. Endlessly scrolling through TikTok is one of John's biggest guilty pleasures.

"I mean, a lot of the band's success came from TikTok, so I'm always on the hunt for new trends and funny video ideas!"

11. Star Wars has been a big influence for all of Alex's life.

"Anakin Skywalker (pre-Darth Vader) is someone that I really look up to. He always had his own way of doing things and his fun-loving personality is easy to gravitate towards. Obviously, his path goes down the wrong way, but the movies don't do Anakin justice. The TV show, The Clone Wars, is where you really see his true character."

"I have a cat at home, and his name is Tony. I grew up with cats my whole life, and at one point we had eight at the same time!"

13. Adam believes his ability to just be himself is the most important thing about him.

"I feel like it's a bit cringey or cliché, but it really is important to be yourself. You have to follow your passion, in this world of social media anything is possible. Anything can be a career! Do what you love and you will never work a day in your life."

14. John believes optimism is one of his keys to success.

"I try to stay positive whenever I can, even when everything goes horribly wrong. Truthfully, nobody likes a Negative Nancy!"

15. Alex wants his fans to know how grateful he is for the life he's been able to lead.

"Having all these opportunities truly means the world to me. Whenever something goes wrong, I always try to see the good in it and take it as a blessing in disguise."

16. At his core, Ryan is a very passionate person.

"When I find something I love, like music, nothing can pull me away from it. I'm willing to put everything on the line in the name of passion."

Can't get enough of Adam and the Metal Hawks? Click HERE to read our interview with Adam Ezegelian to learn more about the band and its rise to fame.

adam and the metal hawksmcmmusic