Adora Svitak On What Adults Can Learn From Kids!

16-year-old Adora Svitak is a writer, speaker and advocate for a number of causes. She started her endeavors young, and was just 10 when she gave a TED Talk about what adults can learn from kids. 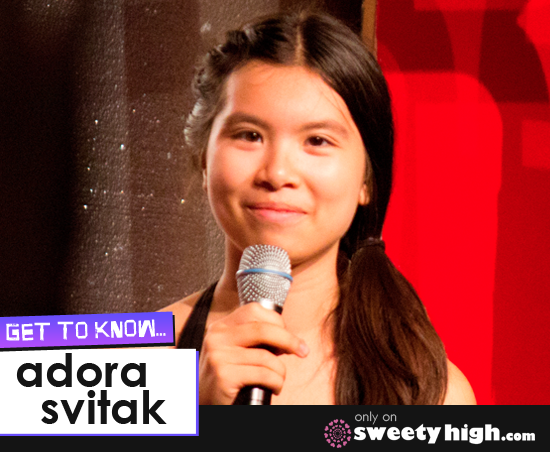 We recently spoke with Adora about her accomplishments from a young age, the importance of embracing youth and her plans for the future!

Adora's Svitak first book, Flying Fingers was published when she was just 8 years old. She had always dreamed of joining the ranks of her favorite authors by being published.

"Holding my first book in my hands and realizing that it was a physical thing, that this was real and not just some crazy dream I hadn't woken up from, was one of the happiest moments of my life," Adora said. "People say that writing is a kind of immortality, and when I held my book in my hands, I had just turned eight years old. So I'd use another word to describe the whole thing: liberating."

She said that what the desire for power is what initially attracted her to reading and writing.

"Some people find it on the piano bench or the soccer field–that utter feeling of joy when you feel, genuinely, like the author of your own story? (Yeah, I had to throw in a writing metaphor.)" she said. "I felt not only empowered, but also transported by the words I read on paper and the worlds I could create when I wrote myself. I could pick up a book and be anywhere I wanted–sitting with the Ingalls family in a certain little house on the prairie, or fighting dragons in mythical kingdoms."

Adora described the emotion surrounding her reading experience as "simultaneous feelings of empowerment and escapism." She was essentially addicted to reading and writing, and her free time was spent with either a book or a pen in hand.

Adora realizes that many kids struggle with reading, while others seem to gravitate toward it naturally.

"There's often a common thread among people who love to read: their parents do, too," she said. "I grew up surrounded by books. I have probably thrice as many books in my room as clothes."

While Adora read book after book as a child, she noticed many of her friends never saw their parents read for fun. The television, rather than the bookshelf, took center stage.

It's also problematic that elementary schools create assignments that make reading seem like an obligation rather than a pleasurable experience.

"[They're] Something to log on a weekly basis and get gold stars for, but not something to engage with passionately and in-depth," she said. "So the way that children are taught to approach reading and writing by their parents, by their schools, and then by their peers who also say, 'Reading and writing is boring' can be a major problem."

As time progresses, it might actually be becoming more difficult for books to catch the attention of potential young readers.

"Increasingly in this day and age, reading and writing have to compete with more colorful, attention-grabbing diversions–it's not just Saturday morning cartoons anymore, it's Fruit Ninja and Temple Run," she said. "With more engaging approaches to language arts from parents, schools, and peers, I think more kids will get interested."

She also started teaching when she was just 7 years old.

Once she knew it was something she wanted to do, she made phone calls to principals of elementary schools.

"I give a lot of credit to those who took the seven-year-old on the phone seriously," Adora said. "I had the opportunity to deliver several presentations to assemblies of students, towing around my beat-up used laptop and a box of stuffed animals to use as 'characters' in the stories I wrote with them, live."

When she was 10,  Adora also started work with the Center for Interactive Learning and Collaboration, which gave her the opportunity to deliver educational presentations through video conferencing.

Adora did a TED Talk when she was 12. In her talk, she highlighted what grown-ups can learn from kids.

"It was exhilarating, and kind of like blowing a puff of air at a dandelion and seeing the seeds disperse–just like you have no idea how many flowers will shoot up the next year," she said. "When I gave my talk, I had no idea how far it would spread and how many opportunities it would create."

Following her TED Talk, Adora was approached by many in the audience who had adapted their thinking about parenting and teaching thanks to her discussion.

We asked Adora what she thought were the biggest assets of the millennial generation.

"Our experience and confidence with technology plus our audacity and social consciousness," Adora answered. "This generation is progressive and connected, and I hope those are traits we continue to have even as we grow up."

"Be impulsive. Be naive. Be creative," Adora suggested. "We typically think of the first two things as weaknesses, but we forget that it takes a little bit of impulsiveness and naiveté to be courageous about necessary risk."

In fact, it was her lack of experience in the world of publishing that gave her the power to publish her own book.

"Had I known how hard publishing a book would be, I never would've even said that I wanted to," she said.

Adora Svitak was just 6 when she picked up the title of "child prodigy," recognized by a local news station in Seattle for her writing abilities. She's come a long way since then.

"When I was younger, I was known mainly as 'child prodigy,'" Adora said. "I want to move away from that image to simply being a writer, speaker, and advocate for causes."

She was recently a youth advisor to the USA Science and Engineering Festival in Washington, D.C., where she met to discuss student's engagement with science, technology, engineering and math.

Adora has also reworked her website and social media pages to rebrand her online presence, honing her HTML and CSS coding skills in the process.

"I'm active in promoting student voice and feminism through my speaking engagements, and discussing a wide variety of causes through my blog posts," she added.

Adora has written for The Huffington Post, Mashable and many other online publications.

Her work also includes travel across the world.

"This summer I'm going to South Korea as part of an organization called Projects for Forward-Thinking, which will set up a week-long camp for 700 high schoolers to learn and practice creativity and divergent thinking instead of the usual drill-and-kill most have been exposed to throughout their education," she said.

Adora graduated earlier this month, and will be attending U.C. Berkeley in the fall!

Much of what Adora has been able to accomplish was possible because of her ambition, and belief that age was not an impediment to progress. She believes other young people can make their dreams a reality with the right amount of work.

"The world has a lot of ways of telling you that you're too young to do X (insert whatever you want to do there), but as long as you believe in the worth of your own ideas, you will be able to find a) people who take you seriously b) resources to make stuff happen and c) a community of like-minded people," Adora said. "Honestly, that's all anyone's ever needed to change the world."

She further advised that kids should keep educated on current events and pursue their passions.

"Life is so much more worth living when you channel your strength toward something greater than yourself," she said. "Oh, and don't drop out of Chinese school in 4th grade, you will so regret it when you're 16. Not like I did that or anything."

To learn more about Adora Svitak, be sure to check out her social pages below! You can also join us at SweetyHigh.com to share your favorite stories about incredible young women!