Aiden Jude is a 10-year-old DJ based out of New York City that has made waves with beats far beyond his years. 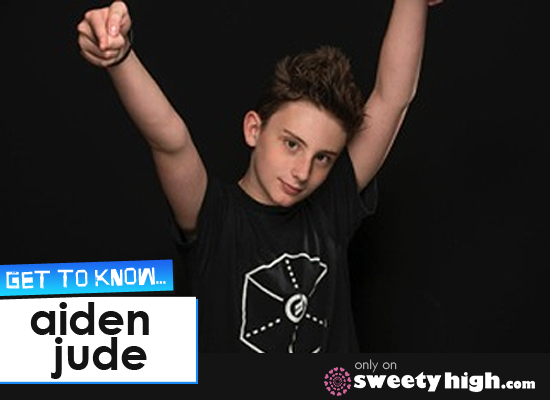 The young up-and-comer recently spoke with us about his experience with electronic music and where he hopes his music takes him!

Aiden Jude was exposed to music early in life. His dad has been a musician for more than 20 years, and from the time he was born, his home was filled with all kinds of instruments.

"I thought it was part of the furniture until I went to other people's houses and saw that not every household has guitars and pianos in every room," he said.

As a kid, Aiden's parents surrounded him with jazz music.

"I was exposed to a lot of complex melodies and rhythms at very young age," he said. "We always ran some commercial studios so being around that stuff from the day I was born made it very natural for me to take on my own direction and interest, and dance and house music I related to the most."

From the time he first heard it, the sound of electronic dance music really resonated with Aiden.

"Feeling the energy of a single instrument or all live instruments is one thing," he explained. "The production quality that takes place in electronic dance music is so intense, so huge, so energetic. Not easy to create with live instruments."

Electronic music made Aiden question what he knew about music, drawing him in even further.

"The power in that sound made me go, 'What is this?! I want this,'" Aiden said. "I was listening to early Swedish house and just got the bug."

After a few years, Aiden's tastes have frown and he listens to every sub-genre of house music he can, with influences from around the world.

Aiden took piano lessons from a very young age. Eventually, the skills he learned as a pianist eased his transition into DJing.

"Without understanding rhythms and timing and melodies and keys I don't know how anyone can really DJ without some musical background, not to mention produce records," he said.

He also tried his hand at alto saxophone. Though he didn't end up pursuing the instrument further, his time playing saxophone also taught him some useful skills to take in his DJing.

Once Aiden had it in his head that he wanted to be a DJ, he just made it happen.

"I don't want it to sound the wrong way, but its not very complicated to start DJing," Aiden said. "You must have a musical background or basic sense, of course, to understand how the beats mesh together. You have to learn your instrument, in this case your mixer and CDJs."

But just as important as the actual music, Aiden explained, is knowing how to engage your audience.

"Next thing you never stop learning is how to read the crowd, how to connect with them and take them on an emotional journey," he said. "You have to know your material very well so you can lead the experience the right way."

He honed these skills with his mentors, also successful DJs.

But DJing can't always come easily. There are times of writer's block for every artist, he explained.

"There are two moments that I've learned that I usually don't have control on and those are the hardest," he said. "The first is to find that moment when you are inspired enough that something just naturally flows."

Sometimes when Aiden sits down and sets out to create new music, he gets stumped. A moment of inspiration can be all he needs.

"I'm always looking for that moment," he said. "The second is usually the last quarter of the process, where the details become very particular and there is so much that is going on and I have to now make all the parts work perfectly together."

He said that whenever he gets stuck somewhere in the creative process, it's usually toward the beginning or the end of the track.

"The middle always kind of flows," he added.

Sometimes, writing a track can take a few hours. Other times, it can take months.

"It depends on the inspiration and how it flows," he said. "I guess that's how all art is created."

"It felt like I was doing what I was born to do," he said.

He has since moved on to much bigger stages, sharing the spotlight with Jason Derulo, Cash Cash and A Great Big World at the 106.1 BLI Summer Jam just this weekend! Even more giant shows are on Aiden's calendar.

Early on, Aiden was influenced primarily by Dutch and Swedish house music, ranging from Axwell and Tiësto to Avicii and Deadmua5.

"Now I dig deeper and deeper and find a lot of underground and even old school house and dance music," he said. "I try to listen to all the youngest breakouts to see where they are going and if there are new movements happening. I research for new music every day."

Aiden also realizes 10-year-olds don't become renowned DJs everyday, and is thankful for the opportunities life has given him.

"I'm just so grateful to be able to do this," Aiden said. "My life has become so exciting and gets more exciting every day. On Sunday for the first time I played to almost 15,000 people. It was the best feeling I've ever had. That's all I want to do now every day, all day."

To keep up with Aiden Jude and all of his latest musical releases, be sure to check out his social pages below! You can also join us at SweetyHigh.com to tell us about your favorite young artists or share your own music with us!