AJ Wray Talks His Musical Past, Present and Future!

14-year-old AJ Wray is a singer, dancer and actor who is gearing up for his first series of festivals across the nation! 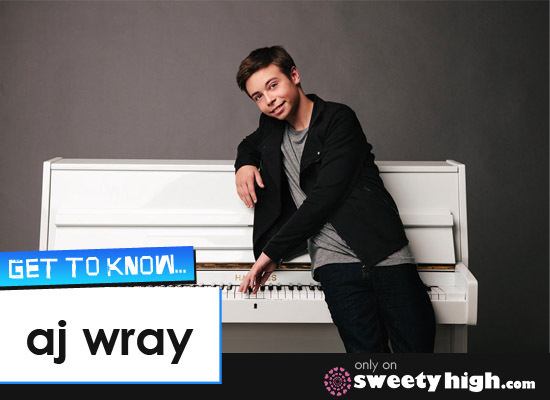 We recently spoke with AJ all about his family's musical history, the things that inspire AJ musically and his big plans for the future!

"My dad has played piano since he was 4 and began playing for the church choir before his feet could touch the pedals," AJ Wray told us.

His mother and father actually met through their mutual love for singing. Their continued affinity for music left a big impression on AJ.

"I grew up with us singing around the piano and them teaching me how to harmonize," he said.

Even though AJ was always around music, he had to reach a certain point before he knew a life of singing was for him.

"I think the turning point in my life was when I first saw my dad sing on stage," he said. "I realized then that I love music and every time I get to sing it is a true privilege."

AJ started learning how to play the piano when he was just 4, and took up the guitar about two years ago. He is now skilled at both instruments.

"I think that it helps me as a musician to be able to sing melody and sing in different keys," he said. "It has definitely helped me as a pop artist."

AJ said that the music he enjoys most is music that can inspire him.

"I like to listen to pop songs that send a good message," he said.

He added that his biggest inspiration of all, both musically and in life, is his father.

"He is an amazing performer and has more musical talent than anyone I've ever heard," AJ said. "He has also always been there when I needed him and he still is to this day."

AJ's big break came when he started sharing his music on YouTube. He recently released his first music video for the song "Another Day In Paradise."

"'Another Day in Paradise' represents how if you look at your day through a new set of eyes, it's just another day in paradise," he explained. "You let go of the things that make you fearful or stressed, and you focus on the positive and/or blessing in your life."

He told us that he had an absolute blast filming the video.

"I got to meet new people, make new friends, and live the dream that I have always wanted to live," he said.

He also filmed a video for his remake of the 1980s classic track "Footloose"!

"I decided to cover 'Footloose' because it had a rockin' beat, fun lyrics, and is a great song to use to get everybody up on their feet to dance," he said.

AJ hopes his music has a positive and profound effect on his fans.

"I want my music to really be a lot of fun to listen and dance to," he said. "I'd like it to encourage people and have a good message. I want people to understand the message that I am trying to send to the world on what I believe and what I stand for."

In the quest to become a successful singer, dancer and actor, he has set his sights high.

"My goals are Disney Channel, record label and concert tour, in that order," he said.

AJ has worked incredibly hard to get to where he is today, and believes that other musicians can achieve what he has.

"GO AFTER YOUR DREAM!!!!" he urged. "No matter what people tell you, you go for what you think is the right thing that will make you and also others around you happy. If you love singing, don't be afraid to sing. Always be able to sing anytime anywhere any day!!!"

AJ is also gearing up to sing on Great Day Houston and Good Morning Texas, as well as performing in upcoming conferences and music festivals!

We can't wait to see AJ Wray continue to succeed in the future. Keep up with his work by following his social pages below, and be sure to join us at Sweety High to tell us about your own dreams and aspirations!