Alexi Blue is a 16-year-old singer-songwriter based out of Los Angeles, known for her gorgeous covers as well as incredible original songs. 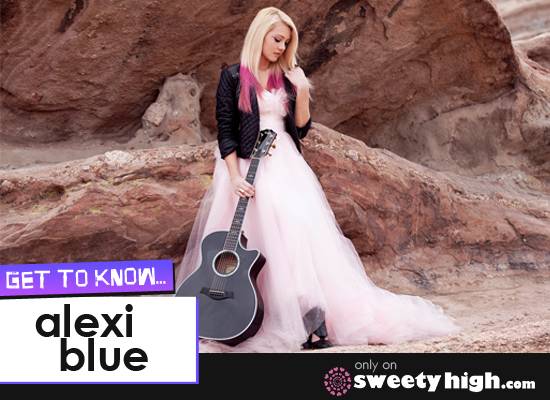 We recently spoke with the young artist about all things music, including her biggest inspirations, her Live Your Life EP and a big roster of upcoming shows!

Alexi Blue's interest in music began when she received her first guitar at the age of 10.

"From there, I learned chords, which turned into songs, which made me want to really start to sing, which led to songwriting!" Alexi explained.

Alexi wrote her first original song when she was 12 years old.

"Looking back now, I can see the lyrics were definitely a little juvenile," she laughed.

But it was a pivotal time for Alexi as a songwriter.

"I started learning how to come up with chord progressions and the transitions between verses and hooks," she said.

For Alexi, the songwriting process has always been similar to solving a puzzle.

"I just work the pieces of the song together until I love it," she said.

Earlier this year, Alexi released a music video for her original song, "Live Your Life." She believes the song has a pretty universal message.

"I wrote it about carving out the time in your life to do the things that are most important to you!" she said. "In other words, Its about fulfilling your bucket list and not letting time pass you by because life moves quickly."

The music video took three days to shoot. Since it was Alexi's first music video for one of her own original tracks, she wanted the video not only to be interesting and engaging, but relatable.

Best of all, she had a blast making the video.

"I loved filming every part of it, but my favorite scene was definitely the scene in the desert with the color chalk," she said. "That was so cool to film."

"I would say my genre is a combination of pop and rock with a touch of blues," she said.

Alexi Blue's fans even have their own fandom name, the Blue Stars!

"Because my last name is Blue and I believe everyone has their own inner shine, I came up with the name 'Blue Stars' for all of my beautiful followers!" Alexi said. "Whenever I sing or film videos, I'll wear blue star stickers next to my eye to represent all of my Blue Stars!"

She also goes to her social media pages every Wednesday to highlight a super supportive fan by naming them the "Blue Star Of the Week"!

Alexi Blue's first original EP, Live Your Life, was released in February and is available here!

"It was such an amazing process getting to see my songs come to life in the studio, and all of the positive feedback on it makes me extremely happy," she said.

Another of Alexi's original tracks, "You Get Me Good," also has a music video releasing on June 21st!

Alexi will be at Vidcon at the Anaheim Convention Center on June 26th before performing at L.A.'s Summer Splash Fest on July 12th and Virtuoso Fest on July 20th. Alexi Blue will also be at Teen Hoot at the Washington State Fair on September 14th!

To get all of the latest on Alexi Blue, be sure to check out and follow her on her social pages at the bottom of the page!

"I love talking and interacting with all of my fans!" Alexi said.

You can also view her music video for "Live Your Live" below and join our community at SweetyHigh.com to tell us about your favorite music artists and share your own musical talents with us!