Alexis Murriel On Playing Football With the Boys!

14-year-old Alexis Murriel made a splash in newspaper headlines last year for being a female player on a championship middle school football team. 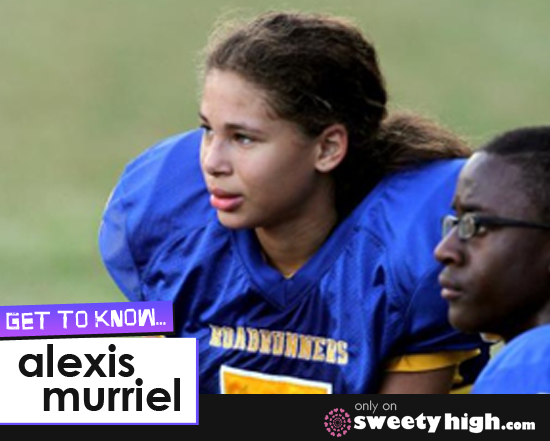 We recently spoke with the young teen about her history with the sport, and what it's like to be a girl in the male-dominated world of football!

Alexis Murriel said she didn't feel like she had too much opposition when she decided to join the middle school football team.

"Most of the girls thought it was cool I was trying out," Alexis said. "But some boys didn't like it so much."

But that didn't last long. Soon, Alexis was a key player on the team. Once her teammates had seen her skills on the field, they treated her like they would any other teammate.

Alexis said that people aren't actually that surprised that Alexis is a girl on a football team.

"What surprises them is to see I actually play a role on them team," she said.

Though Alexis is treated as an equal by her teammates, she said she still has to work extra hard to earn the respect of the opposing teams.

"Of course, every guy either makes a target of me because they think I'm weak or they don't think I'm good and they think they can easily get me down," Alexis said.

However, that has proven not to be the case. Alexis has consistently been a standout player on the team, playing corner on defense and slot on offense.

Alexis is also on her school's basketball, soccer and track teams, but her involvement in those sports has never attracted quite the attention that her football playing has.

"Most girls aren't interested in playing football," she explained. "Also for track, soccer, and basketball there are separate teams so it's not boys mixed with girls."

She also pointed out that those skills involve less contact than football.

"For a girl to go into a male dominant sport would of course cause attention," she said. "Girl's bodies aren't the same as boys. Boys gain muscle faster than girls, which means a girl would have to work harder than the boys just to be on their level."

Those are some of the reasons that Alexis doesn't plan to continue playing school football when she enters high school.

"Boys are too big in high school and college, and speed won't get me past them like it has this year," she said. "Don't get me wrong. A girl is very capable of going to the NFL, but they're going to have to work very hard, almost twice as hard, to even be able to compete with them."

A life of constant weight-lifting to gain huge muscles just to be able to stay competitive doesn't appeal to Alexis.

"I feel like I have a brighter future in basketball," she said.

But she doesn't want to discourage other girls who might want to pursue the sport.

"If you're a girl and you are interested in playing football, please do!" she said. "It's a great sport and if you keep up at it you can be a great player. Don't worry if you're a girly girl that wears dresses all the time if you feel like that's what you like do it."

The biggest piece of advice she had for aspiring female football players is to start as early as you can!

"That way you can learn the game, because you can't just learn it by watching it on TV," she said.

Check out a highlight reel of Alexis's playing below (she's wearing a black uniform with #10 or #33 on the back!) and comment to let us know what you think of her story! You can also join us at SweetyHigh.com to share your favorite girl power stories with us!