Ali Brustofski talks VidCon, performing with Matty B., Maddi Jane, Madilyn Bailey and more in this exclusive interview with Ali as she heads off to VidCon! 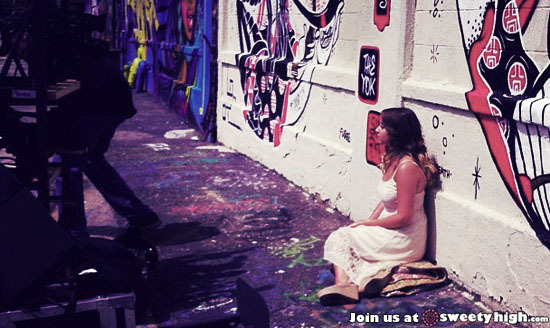 Ali is performing at VidCon today in the Grand Plaza. Also performing tonight are Megan Nicole, Max Schneider, the Gardiner Sisters and more!

"I'm SO excited to be performing at VidCon!" Ali said. "It'll be awesome to get to hang out with other YouTubers and be able to meet some fans."

Ali plans to perform her latest original song, "Green Light" at VidCon in front of a huge audience and make a lot of new fans!

"It's been amazing to perform my first single for my fans and hear that they like the song!" Ali said. "That really means the world to me."

In the past week, Ali reached the huge milestone of 250 thousand subscribers.

"Still cannot believe I have 250,000 members of my Dream Team!!" Ali said. "It's amazing to have such a strong support team."

As Ali has done more and more live performances, she's had the opportunity to meet her fans.

"Meeting my fans is one of my favorite things EVER!" Ali explained. "It's so incredible to see the people who let me live my dreams every day and thank them for being so supportive."

Earlier this month, Ali was also invited to perform at the famous Gramercy Theatre with Matty B. and Maddi Jane.

"It was such a great experience to perform at 2 sold out shows at The Gramercy in NYC with Matty B and Maddi Jane," she said. "I was so happy when Matty's team reached out to me and asked me to be a part of the show! I had SO much fun!"

She's also had the opportunity to work with Madilyn Bailey, who also is known for her beautiful voice and brilliant covers!

"I absolutely LOVE working with Maddy!" Ali said. "It was awesome to spend a week in NYC together working on videos and just hanging out!"

Once VidCon is over, Ali plans to start working on putting a tour together for the fall. We hope that Ali makes a stop near us!