Aline Dolinh is a 15-year-old poet from Virginia who was recently appointed as a National Student Poet! We spoke with Aline about how she started writing, and about how far she has come since then! 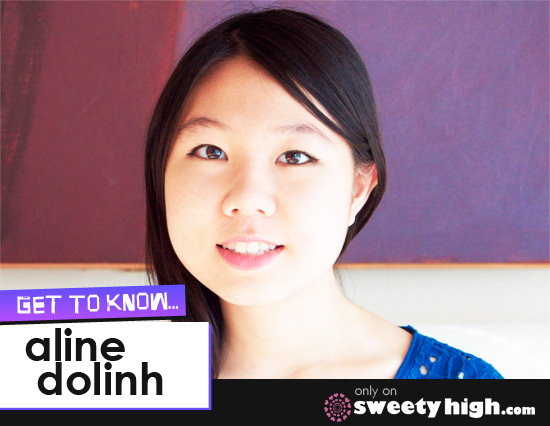 Aline writer her first proper story when she was in the 5th grade. It was about mystery-solving stuffed cats. She said that she probably wouldn't be quite the same if she hadn't started writing at such a young age.

"I think because I started so young, I was less concerned with whether what I was writing was actually 'good' and more concerned with the limits of my own imagination," Aline said.

She admitted that if she'd starting when she was 14, her writing might have taken a different path entirely.

"I probably would have been too embarrassed to write a story about the adventures of talking, mystery-solving stuffed animals because of the filter of self-consciousness I had adopted by that point!" Aline said.

As we get older, we tend to lose our sense of wonder, Aline explained.

"We become a little more cynical about what's considered worthy to write about," she said. "So I'm glad that I started out young because I did take the opportunity to write about all these ridiculous things."

Still, Aline doesn't think that people can only become writers if they start early.

"There's never a point where one is too old to write," she said, "but I know that the stories I'm telling now would be incredibly different if I hadn't begun writing when I did."

When it comes to writing, Aline isn't just a poet. She's also a lover of prose.

"The fact that you can flesh out your characters and settings so thoroughly and truly immerse the reader in a story is something that's always appealed to me," Aline explained, "but that also goes hand-in-hand with how much I love the ambiguity of poetry."

The beauty of poetry lies in that ambiguity and vagueness.

"With a poem, you really only get a few brushstrokes of characterization or sense of time and place," Aline said. "I think that's lovely because people can bring so many more interpretations to your writing."

When people ask Aline about the exact meanings behind her poems, she is always reluctant to answer.

"Everyone who reads a poem will give it a different context in the absence of any explicit certainties, and I think those small mysteries are intriguing," she explained. "The fact that a single poem can have countless meanings to several different people is so powerful."

Further, poetry has served as a medium for a millions of people to voice their feelings and opinions since before the written word.

"Throughout history, we can see how poetry has often documented the perspectives of those who have been systematically silenced and oppressed," she said.

She added that, even today, censorships exists because the written word can have such a huge impact.

Aline said that her inspiration often comes from fiction. She quoted Nikki Giovanni, who said, "If you wrote from experience, you'd get maybe one book, maybe three poems. Writers write from empathy."

Though Aline writes from her own perspective, she has never written a poem she would consider a true confessional or memoir. Instead, she takes her personal experiences and distorts them slightly.

"I like to think of the world I live in – that is, a slice of fairly insular American suburbia – and twist it at the edges a bit to explore the stories hidden beneath it," she said.

Her favorite examples of her own writing are the ones that combine fantasy with reality. She is inspired by other writers who have done the same.

"Some of my favorite writers right now, such as Junot Diaz, Haruki Murakami, Angela Carter, and Carol Ann Duffy, are so good at joining reality with a certain sense of surrealism and fantasy that makes their stories seem wonderfully poignant."

Aline is a huge fan of science fiction because it combines the two subjects so well.

"It explores very human issues such as identity and autonomy but places them in the context of other times or planets or universes," Aline explained.

Thanks to her father's collection of sci-fi novels, Aline grew up reading works by classic science fiction writers including Athur C. Clarke and Isaac Asimov. She also desperately wanted to be one of Star Trek's Starfleet officers someday.

"That theme of wonder and discovery is something I've always wanted to capture," Aline said.

When she was very little, Aline would say that she wanted to be a fashion designer-astrophysicist-author when she grew up.

"I've always been frustrated when people asked what career I wanted, because I thought there were so many interesting fields of study in the world that picking just one seemed impossible," she said.

Instead, Aline has always been interested in learning as much as she can about each topic that piques her interest.

Today, Aline isn't too far off from her initial goal. She is a poetry author, recognized as one of 5 National Student Poets this year. She's even sewn skirts in the past, fulfilling the fashion designer portion of her dream.

"I'm not so sure about being an astrophysicist, though, because I think my patience for math has slowly declined over the years," Aline admitted. "But I think I'm ambitious –when I was little, all I really wanted to be was a Renaissance girl, and that goal hasn't changed."

Aline has always had an interest in acting and playwriting, and she did drama for three years, but as she's gotten older she's grown more and more interested in writing, especially historical writing.

"I'm a huge fan of ancient Greek tragedies," she said. "On that note, I get incredibly passionate when discussing history in general!"

She added that there is so much about the past we don't know, and that she is incredibly disappointed that humans are not yet capable of time travel.

"That's probably evident in my work," she said. "I still get upset about the burning of the Library of Alexandria, which tells you something about my priorities."

In September, Aline Dolinh was appointed as one of five National Student Poets by first lady Michelle Obama at the White House.

"It was like a dream!" Aline said. "But in all seriousness, it was one of the most amazing experiences of my life; mainly because I could see how everyone involved was so passionate about the program. "

"The four other National Student Poets are some of the sweetest, most talented people I've ever met, and all the staff from the Alliance for Young Artists & Writers, the President's Committee on the Arts and the Humanities, and Institute of Museum and Library Services were genuinely supportive of what we were doing and really helped guide us through the entire process," she said.

Click here to view some of Aline Dolinh's poetry! You can also submit some of your own poetry for a chance to be a National Student Poet yourself here!

Also be sure to read our interview with fellow National Student Poets Michaela Coplen and Sojourner Ahebee!

Do you love to write? Share some of your prose and poetry with us at Sweety High!