Calum Worthy On His New Romantic Comedy, All She Wishes!

Calum Worthy is best known as the hilarious Dez on Disney Channel's Austin & Ally, but he's taking on a new role as the romantic lead in the upcoming film All She Wishes. 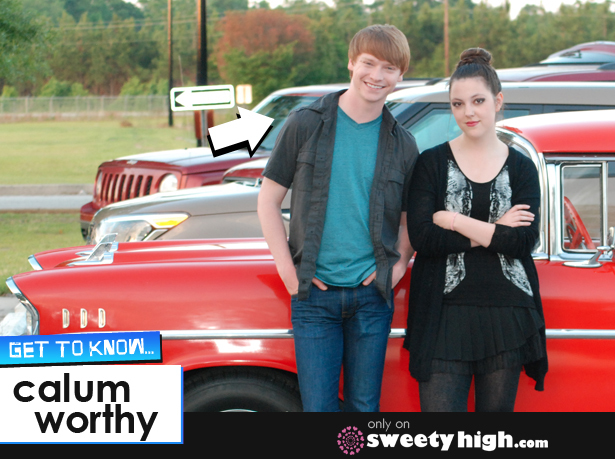 We recently spoke with Calum to learn all about the film, releasing on January 20!

Always the jokester, Calum began the interview with a false start.

"All She Wishes is a very dark horror film about a…" Calum began. "Oh, sorry, wrong movie!"

In reality, All She Wishes is a romantic comedy.

"It's a really, really cute film about a girl who makes a wish on her birthday for a date to her Valentine's Day dance," he explained. "When she wishes for that, suddenly I pop up in the trunk of the magical car that her grandmother gave her. And we both teach each other about life."

Calum said he was particularly drawn to the script for All She Wishes because he had so many odd things in common with his character, Drake.

"What I loved about it is I can actually relate to the character," he said.

Drake is a TV and movie actor in Los Angeles, just like Calum is in real life.

The two have a few similarities beyond the obvious acting connection.

"I'm very similar to him in many ways," Calum said. "We're both dorky. We're both very interested in weird things. And we're both very excited about life in general. For some reason, I'm just happy most of the time, and so is Drake. He's very optimistic about everything."

On TV, Calum usually plays slightly goofy, silly characters. In All She Wishes, he takes on the romantic leading role.

"It was an interesting switch," Calum said. "That was one of the reasons I was really excited to do the movie. It was a big change for me."

But Calum decided to approach the role just as he would any other comedy role.

"I just tried to figure out what would make Sophie's character drawn towards him and why she might fall for him," he explained. "It was an interesting process. And luckily, Lexi, who plays Sophie, is an amazing actress who is so talented and we had great chemistry."

Want to learn even more about All She Wishes? Be sure to check out our interview with Calum's costar, Lexi Giovagnoli, in the related articles, and stay tuned for even more from both stars! You can also join our fan community at Sweety High!