Alyssa Carson is a 13-year-old aspiring astronaut whose goal is to be the first person to step foot on Mars! In a recent interview, we asked Alyssa all about her space goals and the steps she's taking to make her dream a reality! 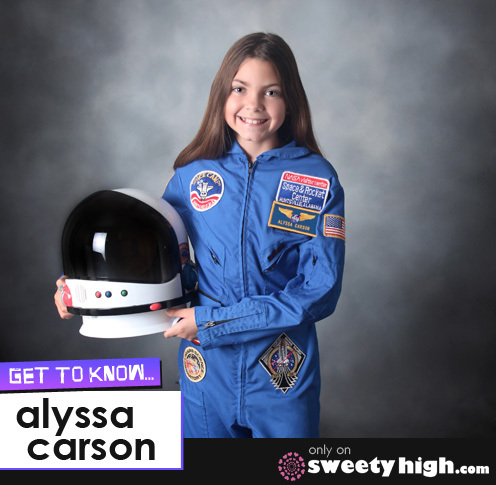 Alyssa believes she first got the idea to travel to Mars from a kid's television show on Nick Jr. called Backyardigans.

"It's a bunch of creature-people and they all have little apartment houses and all their houses lead into one big backyard," she said. "In each episode they would go on an imaginary adventure in their backyard. In one episode they went to Mars."

After seeing the episode, Alyssa asked her father if humans had ever made it to Mars.

"He told me all about the moon landing and Neil Armstrong, but that no one had gone to Mars," she said. "After that I had the desire to go to Mars and I haven't quit since."

Since then, Alyssa has had an insatiable desire to soak up knowledge about space. As a small child she'd ask her dad for every book, DVD, tape and poster that pertained to Mars and outer space. She loved watching videos of Mars rovers and collecting maps of the the planet's surface. From there, her space collection grew.

As Alyssa actually absorbed more information about space travel, she wanted to go on a mission to Mars even more.

"I think after learning more about space and gaining a wider knowledge about it, I found an even greater love for space," she said. "I'm curious about not only Mars, but pretty much the entire universe."

To fulfill this quest, Alyssa started attending space camps, where she met many people who would be pivotal in her journey.

For example, she was introduced to Dr. Deborah Barnhart, CEO of the U.S. Space & Rocket Center. Dr. Barnhart told Alyssa about the new NASA Passport Program, which involves visiting all 14 NASA visitor centers around the United States to get your "passport" stamped.

Alyssa was eager to join. She attended the local centers first, beginning with the U.S. Space and Rocket Center in Huntsville, Alabama, then Space Center Houston.

Before long, she had traveled across the country to visit each center, becoming the first person to ever complete the NASA Passport Program.

She's also been the first person to complete all of the NASA space camps in the world, where she received basic space training.

Alyssa has constantly been driven by her curiosity of what Mars may offer humankind.

"There are things about the planet that have always intrigued me, so I've always wanted to go and see what's there," she said.

Best of all, Mars has massive potential beyond pure exploration.

"Mars has a lot of features similar to the Earth," she said. "With current technology, we could actually turn Mars into another earth."

This process would include warming up the planet and creating an atmosphere in a process called terraforming that might make it hospitable as a second planet where humans could live.

"It would have an atmosphere and grass, trees, an ocean, just like earth here," she said. "I think that's kind of the main reason why we're looking at Mars. With current technology, we can terraform Mars in 300 years."

She said that, while 300 years may sound like a long time to wait, it's actually quite fast compared to the natural process that the earth took.

"I kind of want to get that process started so we can start leaving Earth," she said. "Eventually the earth will die and so we have to take these first baby steps towards moving on and continuing the human race."

On Alyssa's website, her mission statement reads: "I am the Mars generation." We asked her about what this meant to her.

"You have the moon generation and these groups of kids that could dream to be an astronaut," she explained. "They were the perfect age for the moon landing."

She said that the same thing is happening now, but this generation of aspiring astronauts will take that even further.

"I'm part of that age group, and as we get older, we'll be that perfect age to become an astronaut and go to Mars," she said. "All kids, even if they're not working in that field, are still a part of this generation that will be sending humans to Mars."

We wish Alyssa the very best as she gets closer and closer to her goal! You can check out her website here to learn even more about Alyssa!

Love this story? Check out more girl power news here, and be sure to join our community at Sweety High!