Amy Cimorelli: What Girl Power Means To Me

To me, girl power means being a women of strong character and really knowing yourself, your morals and what you stand for. It's about knowing that being yourself is enough, and really standing up for yourself and asking for what you want, instead of being afraid to burden anyone. It also means making sure you've covered your needs so you can help other people. 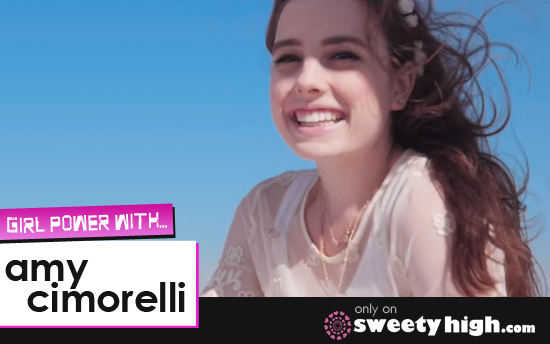 Divergent was a really good example of girl power, because the main character, Tris, was so in control of herself and her destiny. She worked so hard it was really inspiring.

The character Tris is the first person to come to mind right now when I think of a strong woman. That was really cool, and one reason why I loved that movie. I saw it three times.

With girl power I also think about strength. I took boxing for a long time, because my dad owned a gym, and it was so empowering to be able to be strong and hit back and to learn how to defend myself. I think self defense is actually a big part of girl power for me.

Personally, I still want to take a lot of self defense classes, to learn how to actually defend myself against things. I also want to learn how to stand up for myself by expressing my emotions, asking people for things, and trying to put myself first when needed.

I want to get my needs covered so I can help others to be better. You can't give what you don't have. You have to make sure that you're whole before you can help other people.

Amy Cimorelli is a member of Cimorelli , a group of six singing sisters that has achieved recognition across the world thanks to their powerful voices and gorgeous harmonies. Amy is the third youngest sister, and sometimes plays guitar for the band!