Amy Talkington is the author of Liv, Forever, a brilliant new young adult novel that tells a paranormal love story like you've never read before! 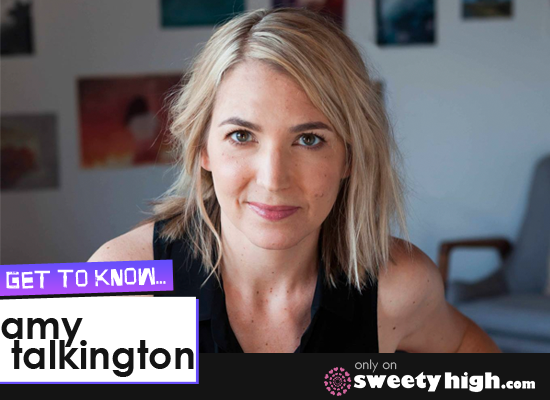 We conducted a Q&A with the author about her inspiration and the new book, which you can win by entering our latest Sweety High contest! Read on for details!

Liv, Forever was originally intended to be a screenplay. When and why did you decide to turn your story into a book?

I'm a screenwriter (I co-wrote Avalon High and some other movies!) so when I think of a story I naturally first think of it as a screenplay. It's just what I do. So, when I got the idea for Liv, Forever, I thought of it first as a movie. But the more I thought about Liv and the world of Wickham Hall, the more I realized I wanted more. Screenplays are incredibly lean and prescriptive and with Liv, Forever I wanted more layers than I could ever write into a screenplay. For example, I wanted to explore Liv's voice. I wanted to explore the other ghosts' voices.  Also, I wanted to create a deep mythology and history for Wickham Hall, something that could really flourish and develop in a book.

What inspired your choice to do a modern take on the ghost story? What was your thought process when you were creating your own ghost mythology within the world you created?

First and foremost, it was Liv, I wanted to write about this girl who thinks and feels really deeply but wears some serious emotional armor. Then I started wondering how a girl like that might figure into a ghost story (something I'd long been interested in). What if she had to die in order to learn how to really feel love? I thought that sounded pretty interesting.

In terms of creating the ghost mythology, I spent a lot of time thinking about the rules of the world and the history of the school. I have a very detailed timeline that I used to keep Wickham Hall's long (and sordid!) history consistent.

Was Wickham Hall based on your own experiences at a boarding school? Did you ever feel like there was something sinister or spooky about the school that might have inspired Liv, Forever?

I went to Choate Rosemary Hall in Connecticut. Choate is nothing like Wickham Hall—Choate is diverse, inspiring, and tolerant. And I flourished there. I never felt that there was anything sinister or spooky. There was no talk of ghosts or hauntings that I ever heard. But I did a lot of research and there are plenty of boarding schools that do have those kinds of rumors.

In their own ways, Liv, Gabe and Malcolm are all outsiders. Did you ever have a similar experience in school? Why do you think this was an important angle to tell the story from?

Great question. I always felt like an outsider. It was my identity. In retrospect, I realize that it was kind of an armor that I wore. Like Liv, I projected an attitude but when it came down to it I was terrified to be emotionally vulnerable. So, I wrote all that from a very honest place.  I think the story had to be told from that place. It's a big theme in Liv, Forever. The 1%, the marginalized, the outsiders—Liv ultimately saves them all.

What made you decide to make Liv a foster child? Is Liv's initial inability to love based on your own personal experiences?

I was not a foster child but my parents did divorce when I was very young. I do think that contributed to my inability to open up

The book is really rich with art references. What made you decide to make Liv and Malcolm artists, and what do you think that element adds to the story?

I wanted to give Liv one very serious passion. When we meet Liv, she's not very emotional with people so instead she's put all that love and energy into her art (and learning about other people's art). I wanted the reader to understand she did have passion even if she wasn't quite sure how to point it towards people. I also wanted to write flirtation in an art studio. I was a painter in high school and I had some pretty serious crushes in the art studio and I wanted to write about that. By the way, I've posted most of the art references on my website here, in case the reader wants a quick reference guide!

Who would you cast as Liv, Gabe and Malcolm in a film version of Liv, Forever?

We're already working on a movie version! I know there will be a new crop of wonderful actors by the time we are actually casting this but here is a dream cast as of today:

Any chance Liv, Forever will become a series?

Oh, I hope so! I think by the end of the book, the reader has a pretty good idea about where the sequel takes Liv (and it's super intense!). The big question is: how does Liv continue to connect with Malcolm. And, that, I will not tell!

If you want to know all the latest on Liv, Forever follow me on Twitter @amytalkington and Tumblr!

Curious about the book? Check out our review of Liv, Forever here and click here to find out how you can win a signed copy of the book!