Andrea Sreshta is one of the co-founders of LuminAID, a solar-powered light designed to help people in need following natural disasters. 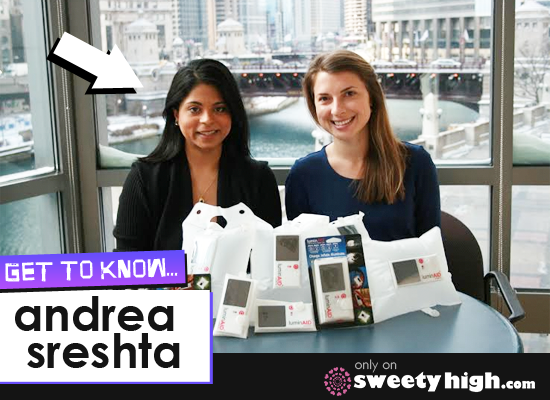 We recently spoke with Andrea about working with business partner Anna Stork to create LuminAID and the impact her product has had on the world!

To start, Andrea explained how LuminAID works. LuminAID has a built-in solar panel. Exposing the panel to sunlight charges its rechargeable battery, similar to the battery inside of most cell phones and iPods.

Users charge the batteries in the sun for up to 7 hours, and LuminAid holds that charge, which can then light an LED light connected to the battery.

LuminAID is also inflatable. It packs flat, but inflates to diffuse light like a lantern. It's also waterproof, and floats. LuminAID also has two power settings.

"There's a high setting that lasts for up to 10 hours," Andrea said. "That's enough to read by in a dark room. The low setting lasts up to 16 hours that makes a great nightlight or tent light."

The product was greatly inspired by the devastating 2010 earthquake in Haiti and the crisis that followed in the disaster's aftermath.

Andrea and fellow architecture and design school classmate Anna Stork, who later became her business partner, were hearing a lot about Haiti in the news when the concept for LuminAID came to mind.

The two had just been tasked with a semester project in graduate school. The prompt was  to create a design for disaster relief aid.

Andrea and Anna decided they wanted to design something to provide people with the necessity of light.

"We realized there are a lot of supplies being put down on the ground, but lighting doesn't seem to be one that's on the top of the list," she said. "After the sun goes down, you have people living in very dangerous conditions, who are feeling very unsafe at night."

Andrea said that light is an overlooked necessity in a crisis because obviously medical supplies, clean water and food top the list.

Next on the list are needs such as shelter. Andrea said that tents and tarps, as well as lighting, fall into that category.

"You have people who have just lost everything, and on top of it they're feeling very unsafe," she explained. "In a lot of places where disasters happen you have issues of violence and kidnapping, and unfortunately it brings out the worst in some people."

Proper lighting not only comforts in times of crisis, but can provide a level of defense, as light wards off potential crime when a situation gets out of control.

They wanted to develop clean and safe lighting for situations where replacement batteries for flashlights were unavailable.

"Some light sources are dirty and toxic, such as kerosene lanterns," she said. "Candles can cause fires, especially in close quarters."

They knew their product had to be practical, inexpensive and use renewable energy.

"The light is relatively low cost in comparison to other types of lighting solutions and it doesn't require replacement batteries, which is something that's often scarce after something like a disaster," she said. "We wanted to create something that would be lightweight and highly portable and pack flat so it could be distributed in large numbers."

After natural disasters, supplies are acquired in large numbers, Andrea explained. The faster and easier it is to pass around supplies, the better.

With help from Anna's undergraduate background in engineering, she and Anna started putting components together to create a prototype.

"We bought a bunch of handheld heat sealers and were really just putting them together on our own in Anna's kitchen," Andrea said. "We started from scratch and were literally buying things off Amazon and Radio Shack to put together our ideas and come up with the best design."

After lots of tinkering, the team created a suitable product that would do everything it needed to do at the lowest costs possible.  Soon, the duo were nearly ready to start mass producing LuminAID, but first they needed funding.

They turned to a crowdfunding campaign on IndieGoGo to get started.

"We were looking for $10,000 to manufacture the next 500 to 1000 products, depending on how much manufacturing was going to cost, to further test out the light," she said.

With a little more product testing, the founders could see if mass producing LuminAID was a viable idea.

The idea caught on quickly. The campaign quickly raised more than $50,000.

"It raised more than five times the money we had originally planned," Andrea said. "We manufactured more than 5,000 of the product coming out of that campaign, and it's just scaled from there."

LuminAID has teamed up with natural disaster aid as well as education and peace organizations to get their product out in the world to really help people.

"We're lucky enough to partner with a lot of really wonderful charities who do good work around the world, including people who build schools and orphanages, or help to provide access to electricity " Andrea said.

LuminAID is also a for-profit company, and part of their sales come from people who are interested in the product simply for camping and recreation.

"It's really satisfying to be able to run a business that extends to being able to help in other parts of the world with the same product," she said. "There are so many great small businesses but not many of them have the added benefit of being able to help people with their product in the way we've been able to with LuminAID."

LuminAID has grown from a campaign funding by the people to its own self-sufficient business producing on a  huge scale.

"We've been able to scale manufacturing operations to this level through customers and partners with legs on the ground in meaningful numbers after disaster," she said. "That's been a big milestone for us this past year."

For example, LuminAID was a big help in the Philippines after the devastating typhoon there last year.

Next, Andrea and Anna plan to develop new products and focus on further building their brand.

"We also want to continue to extend our social mission to make lighting a regular part of disaster and emergency aid," she said.

For even more info on LuminAID and their mission, be sure to check out their social pages below! You can also join us at SweetyHigh.com to tell us about the causes you are the most passionate about!