After a weekend of doing basically nothing but sit around playing Animal Crossing: New Horizons, half of me feels like I've completely mastered it, while the other half feels there's still so much to learn.

Since Thursday night I've been learning the ins and outs of the new game and its mechanics, and while everyone will develop their own little strategies along the way, I think a few little tricks I've learned might be pretty valuable to new players. Here are my top tips for progressing quickly and earning a few Bells along the way.

While you'll want to use the first 5,000 Nook Miles you earn paying off the expenses for your island getaway, I recommend using the next 5,000 on the Pocket Organization Guide, available through the Nook Top Terminal inside Guest Services. This handy tool brings your inventory up from 20 slots to 30, meaning you'll be doing less running back and forth to sell the fruits of your latest haul. It'll also make it easy to collect the bugs, fish, fruit, shells and everything else needed to help you start earning your Nook Miles more quickly.

Bring Your Workbench With You

Because my fishing poles and bug nets break constantly, early on in the game, I was crafting multiples of each and toting them around with me, using up valuable inventory slots. After spending way too much time running back to my centrally-located workbench, I realized it was a furniture item that I could just bring everywhere with me. Yes, it uses up a slot (and you'll want to be extra careful not to sell it when you peddle your wares)  but lugging it around means you'll always have access to new tools the instant one breaks. 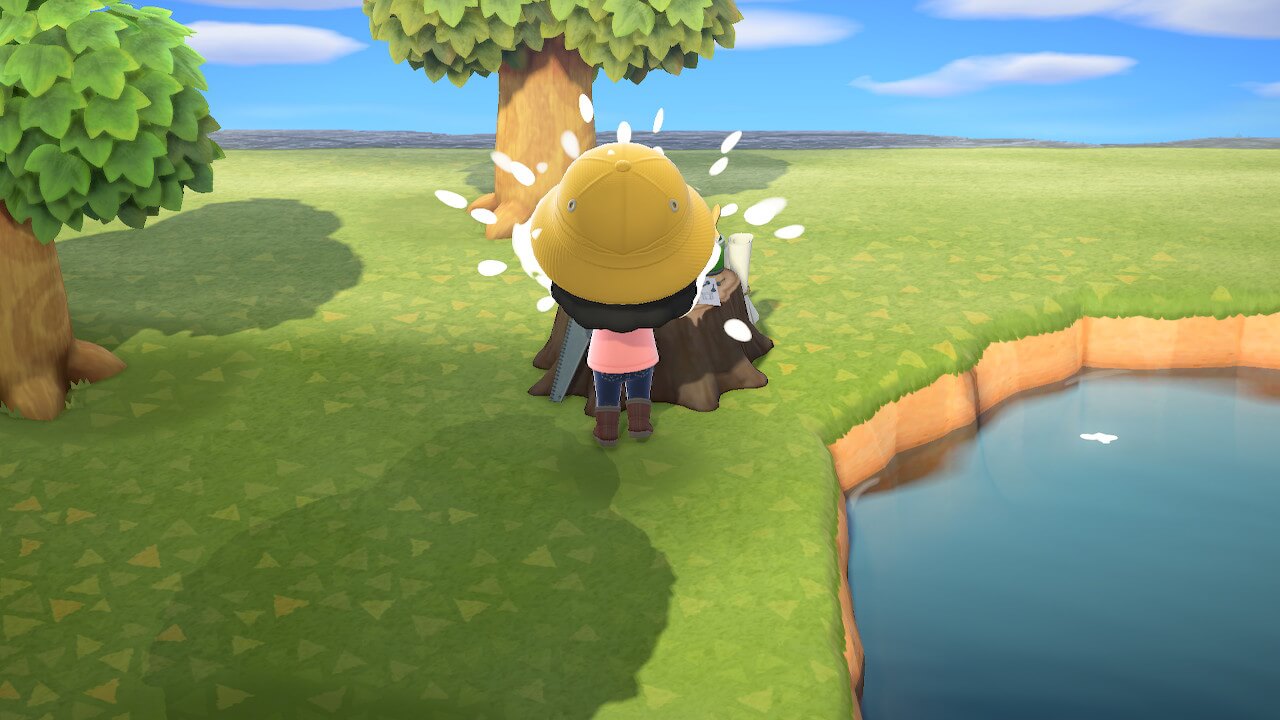 See If Upgrading to Reinforced Tools Suits Your Style

Spending 3,000 Nook Miles buys the Pretty Good Tools Recipes, which allow you to take your basic tools and reinforce them with an Iron Nugget so that they can be used longer before breaking. This means using (and gathering) fewer resources, and spending less time at your DIY station at the cost of using up valuable Iron Nuggets. However, at the beginning of the game in particular, Iron Nuggets can be a little hard to come by—and are frequently needed for mandatory projects—so you may not want to use them for these tools, given that they are still going to break after some time. On the other hand, Flimsy Fishing Rods and Flimsy Bug Net are made using only Tree Branches, which are an infinite and replenish-able resource. A few days into the game, I still mostly rely on the flimsy tools to save up on Iron Nuggets, but your personal mileage may vary.

Get All the Branches You Need From One Tree

Like I mentioned before, Animal Crossing: New Horizons players have an infinite number of Tree Branches at their disposal as long as they have a tree nearby. If you spend a lot of time running around and shaking trees, and you're still not getting the branches you need, try sticking to one tree. If you're patient, you can stand still and shake a single tree until up to eight Tree Branches fall off of it. Once they do, collect them, and you can shake down eight more. Unlike with Iron Nuggets, you can keep doing this to your heart's content, meaning you can make as many Flimsy Fishing Rods and Flimsy Bug Nets as you can carry. I recommend keeping 30 branches on you at all times, since they stack and only use up one inventory slot up to that point. 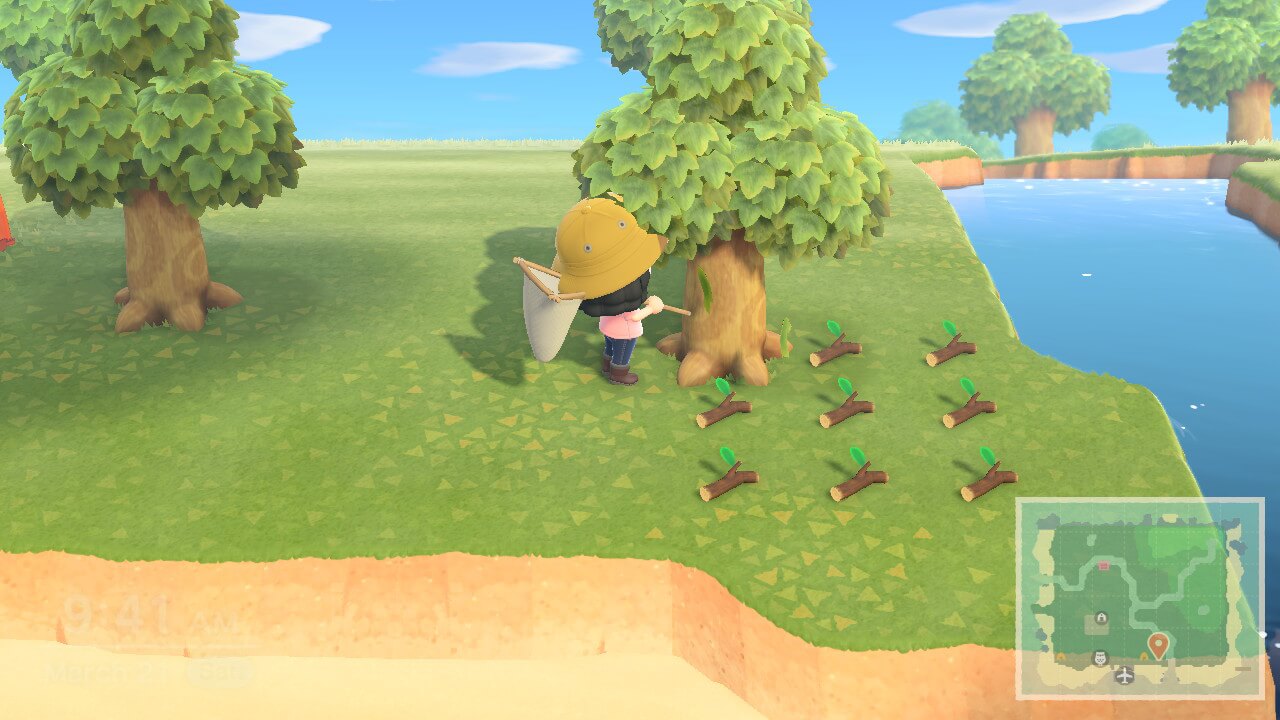 Tap A to Craft Faster

Speaking of crafting, it can be a bit of a tedious process to craft item after item after item—but did you know that tapping the A button during this process makes you DIY super fast? It'll save you time, and make the process feel like less of a hassle, particularly if you mostly craft flimsy tools.

Get the Most Out of Your Rocks

You've probably noticed that you can get valuable items such as Stones, Clay, Iron Nuggets and even Gold from the rocks that appear around your island—but are you maximizing the potential of your rocks? Before you start chipping away at them with a shovel or an axe, use the environment or dig holes to create a barrier behind and to the side yourself, so you don't get pushed around as you strike the rock. Do this correctly, and you should be able to get eight items out of each rock every day. One rock will even contain money every day, granting you 16,000 free Bells daily. Just don't make the mistake I did and eat a fruit before hitting a rock with a shovel, because that will destroy it, leaving you with just one item—usually a single Stone—and it will take days for it to regenerate. 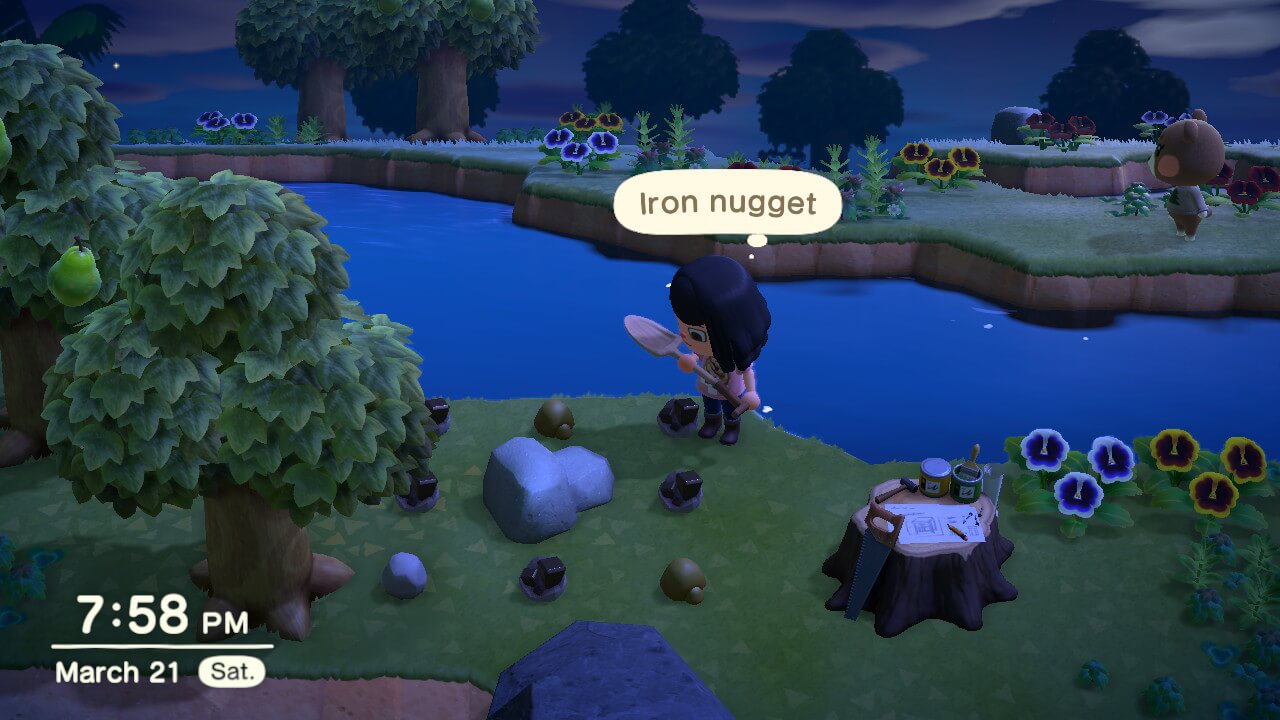 When you've broken 20 fishing rods, bug nets, shovels and axes in a single day, it's easy to get a bit mixed up as to what broke most recently and needs to be crafted anew. The symbols below the items in the DIY menu can help you. The checkmark under a crafting recipe means it's been crafted before, while a basket means it's currently in your inventory. That means if it doesn't have the basket, you're not carrying it. Time to craft away! 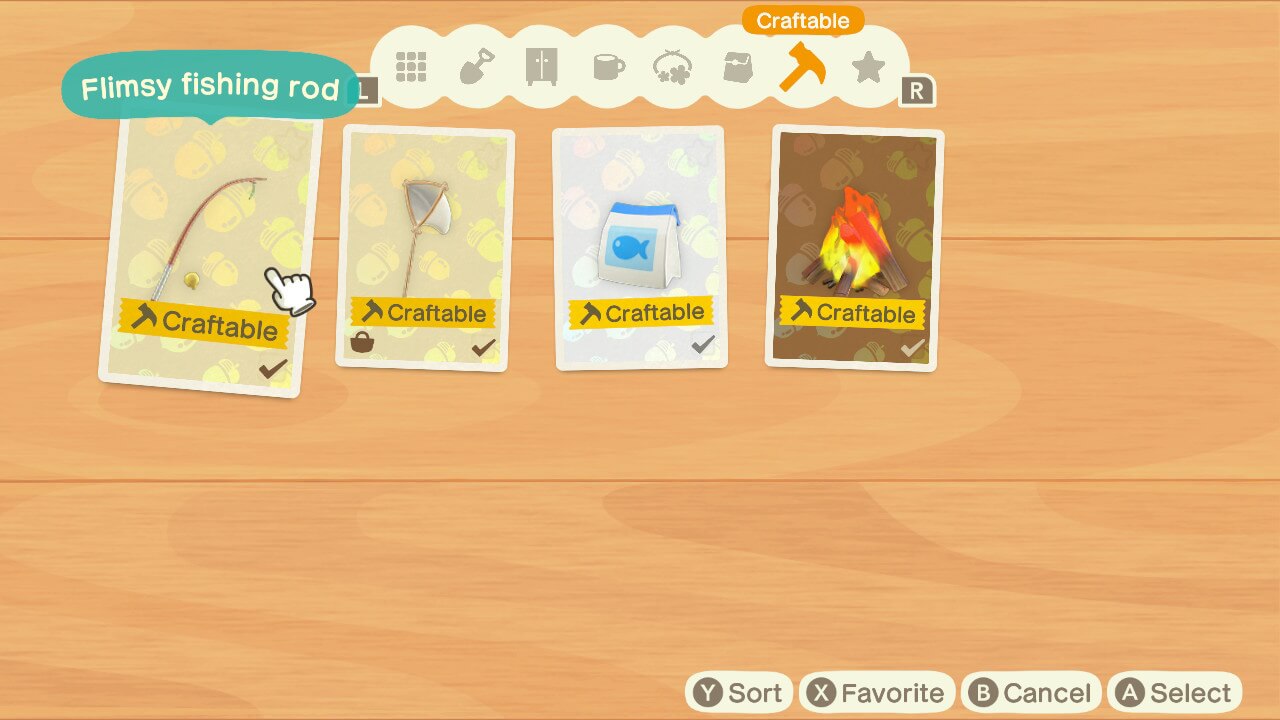 Many players are getting stuck early on in the game because they simply can't find enough Iron Nuggets on their islands. When Timmy and Tommy ask for 30 of them to build their shop, it might seem like it'll be weeks before you've collected that many. The solution? Use a Nook Miles Ticket to visit a deserted island. Tom Nook gives you one for free near the start of the game, and you simply have to take it to the airport on your island to fly to an island teeming with resources. Each one has rocks that can be mined for materials, and using the rock trick above, you'll likely start racking Iron Nuggets before you know it. If you don't get enough, additional tickets cost 2,000 Nook Miles each from the kiosk.

While you're there, you might also encounter some folks who you can invite to live with you on your island. If they're adorable, talk to them to befriend them and get them to head over. If they're not, and you'd rather they didn't visit, simply ignore them and they won't bother you. 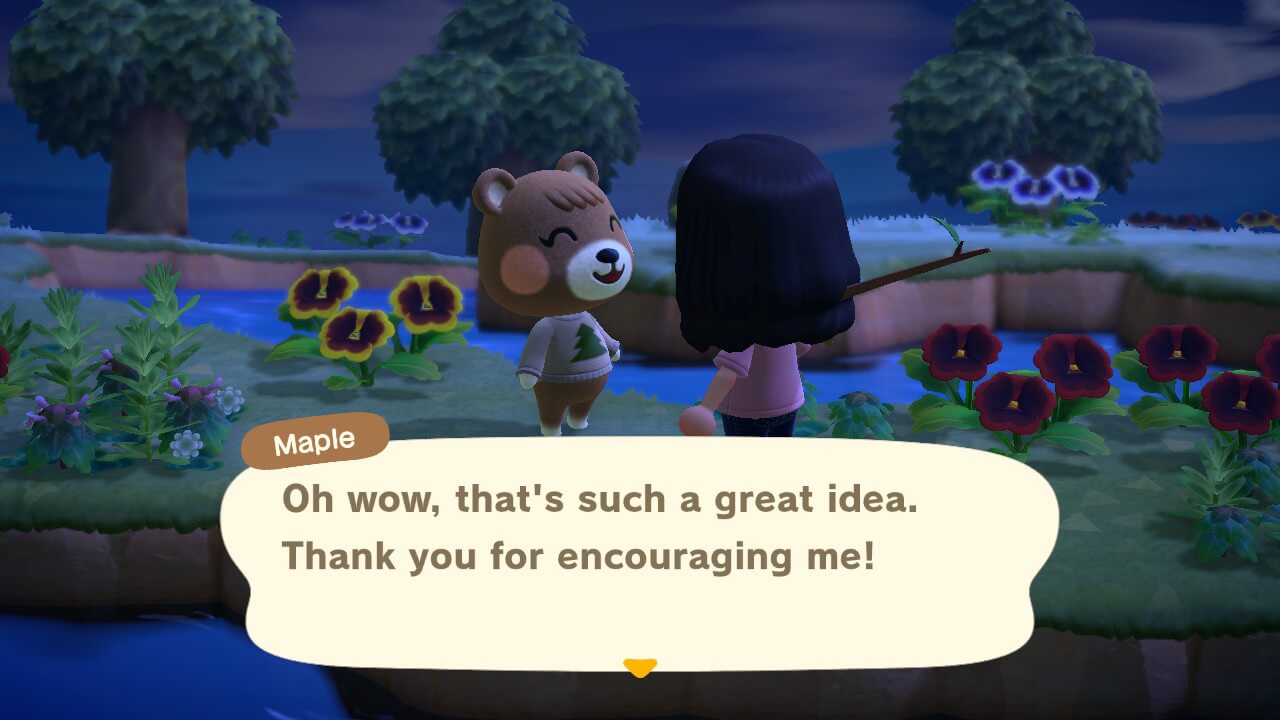 While I recommend saving one of every fish and insect you collect to donate to the island's gorgeous museum, the rest can be sold for a nice profit. When you're trying to rack up Bells, it can be good to have a firm understanding of the value of every item so you know what to collect and what isn't worth your time. While the plentiful hermit crabs that roam the beach are worth 1,000 Bells each and nocturnal blue emperor butterflies will net you 4,000 a pop, horse mackerel are worth just 150 apiece, meaning you might as well throw them back. By focusing on valuable critters, you can earn some big money very quickly. While I've personally enjoyed selling items one by one to find out how much they're worth (and taking notes on my findings in my phone), a quick search will reveal a number of websites that track these values. 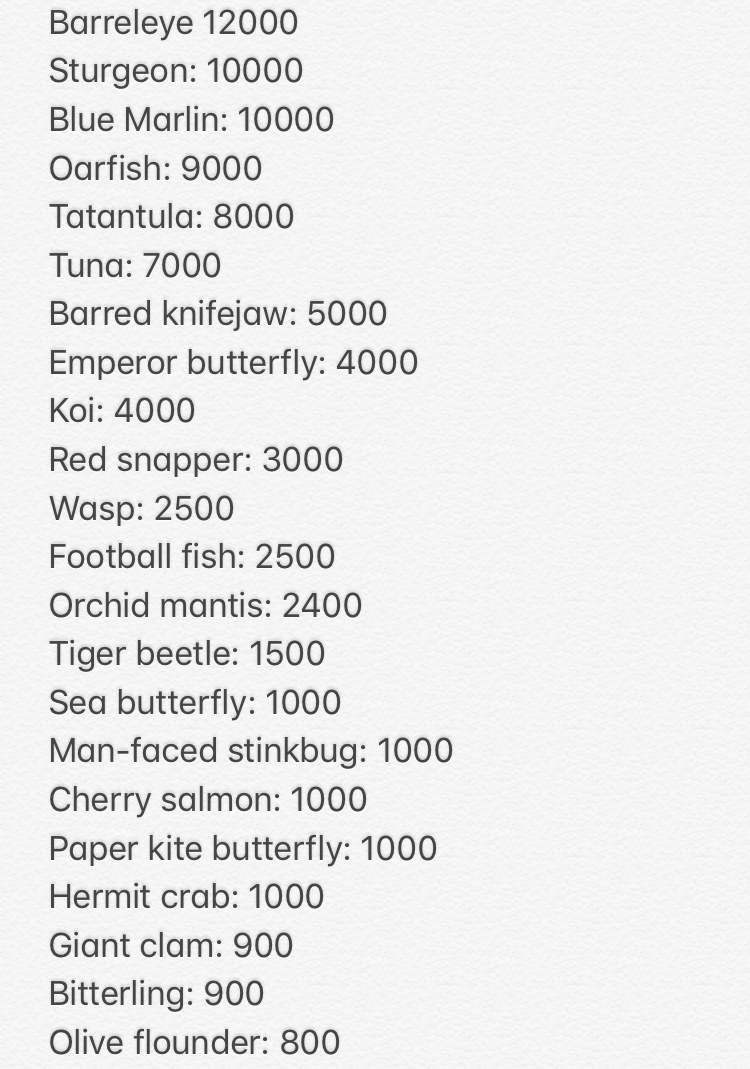 Visit a Friend Who's Ahead of You

If you're a bit behind on your adventure, you should visit a friend who's been playing longer than you. Not only is it a lot of fun to play with pals (especially given that you can play online from afar and voice chat with them during social distancing), but there's a lot to be gained by visiting, too. For one, you'll get to see a snapshot of your future on the island, but secondly, you'll be able to start buying DIY recipes that might not be available for a little while in your own game. Can't access parts of your island without the Vaulting Poll or Ladder? If your friend already has them, you can get those early! You can also use their mirrors and wardrobes if you don't happen to have those items yet.

As a thank you gift, be sure to bring over a bundle of the fruits from your island and leave them with your friend, and borrow a few of their fruits as well. If they're different, there's plenty of money to be made. Non-native fruits sell for 500 Bells each, so you might be tempted to sell them right away, but play the long game and plant them on your island, instead. In three days, you'll each have trees that will regularly bear that valuable fruit. 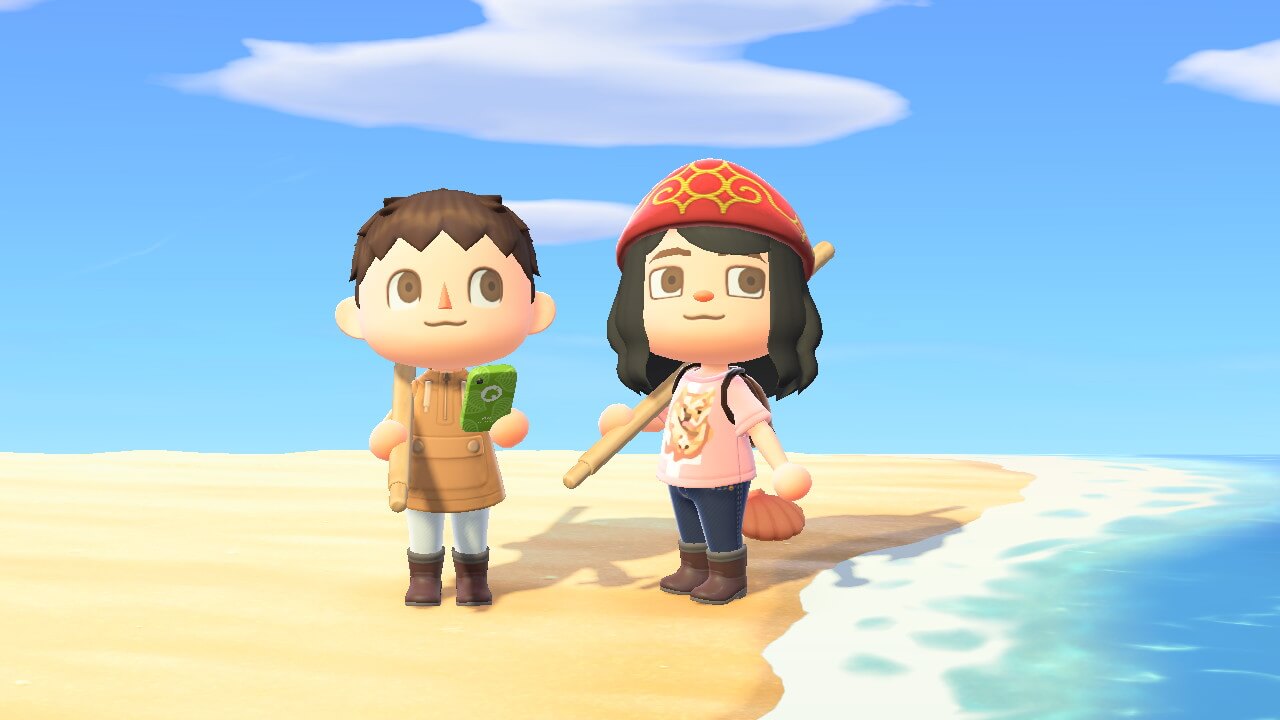 Barely getting started with Animal Crossing: New Horizons? Click HERE for some tips on how to name your island.