So what does it take to program gameplay? We chatted with Anna to find out all about her role and what it means to be a woman in the gaming industry—plus a teeny tiny teaser for the highly anticipated Psychonauts 2. 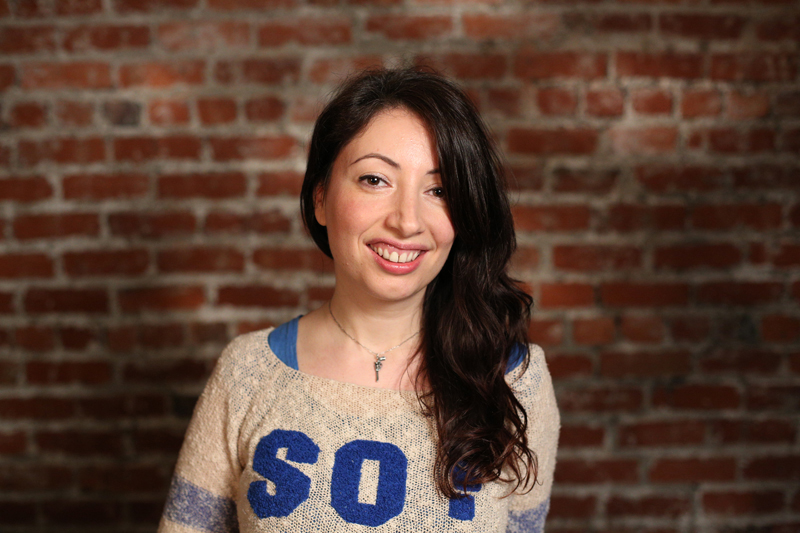 Sweety High: What was your history with games before you joined Double Fine?

Anna Kipnis: Double Fine was my very first game development job, but before that, I did actually once write a freelance review for the sadly now defunct XBN Magazine. I remember playing the game I had to review methodically to the point where I stopped enjoying it, just to make sure I had seen all that the developers had poured into it. It made me really appreciate how much effort is required from the critic reviewing the game. It helped later to not get too mad when reviewers didn't like something I worked on.

I had mainly only enjoyed games as a hobby before either of those opportunities, though I did study computer science in the hopes that I would make games someday—I thought you had to be a programmer to work in games.

My favorite games growing up were Super Mario Bros., Castlevania: Symphony of the Night, and Princess Maker 2. I'm not originally from the U.S., so it took me a long time to learn English well enough to understand the great jokes and idioms in adventure games, especially those from LucasArts. Grim Fandango came out right around the time I finally managed a grasp on the language. I really loved that game and feel incredibly lucky to work at the studio headed up by its creator.

SH: How long have you been working at Double Fine?

AK: I've been at Double Fine since November 18th, 2002—a little over 14 years. At the time, the studio was developing the original Psychonauts. When I joined, my role was gameplay programmer.

One of my first tasks was to create behaviors for the character Boyd Cooper. He was already modeled and rigged for animation, and even had some animations created for him. I made him programmatically walk around to the spots where it made sense to play the animations our artists created for him, spend some time in each spot, then move to the next, all while talking to himself.

[Double Fine founder] Tim Schafer wrote some dialog for Boyd that I was to use to construct Boyd's idle chatter. It was written so that he almost never said the same sentence twice—pick something from column A, then something from column B, then column C, where each contained a completely different phrase. The resulting effect sounded like he was muttering to himself, but never in a predictable way. He could also react to the things the player did.

It really feels sometimes like my job is that of a magician, where I take ordinary things and weave them all together to create something that feels like it has a life of its own. I also got to design and hook up puzzles, and wrote general systems to help bring other characters to life. As a senior gameplay programmer, my tasks are very similar, except that I oversee more systems now, make architectural decisions about them, and hold greater responsibilities for making sure things are working well in a game. 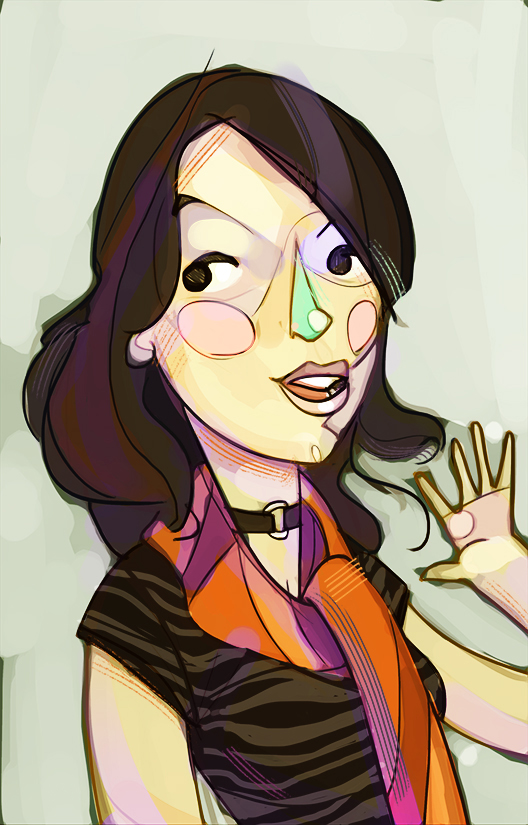 SH: How has your role with the company grown over time?

AK: There is a fairly flat structure at Double Fine, so even though my official title is now senior gameplay programmer and I've served as a lead on several projects, my role changes depending on a team's needs.

The coolest thing I've gotten to do at Double Fine is creatively direct a team of our insanely talented developers. We do a two-week studio-wide game jam here, where anyone at the company is able to pitch a game. In 2012 and 2014, we even opened the process to the public. In 2014, I pitched a game, Dear Leader, and the lovely people from the internet voted it as one of the finalists. You can check out the entire process of making the games that got greenlit from that year for free on YouTube.

SH: How much of your job is playing the game you're working on?

AK: A lot of my job involves playing the game, but there's a catch! The truth about game development is that even though you get to play your game all the time, that game is broken, ugly, and boring most of the time. And it's always that one game you have to play, every (work) day. It sometimes takes years to get games to be fun! But you still have to keep playing it and improving it until it works.

SH: Are there any gameplay elements you were highly involved with in a game you worked on that you're particularly proud of?

AK: I worked on the Milkman level in the original Psychonauts. It was an unusual design and theme, but I'm really proud of our small strike team, because I think we pulled it off.

I'm also proud of the design I came up with for how the narrative events worked in the prototype for Dear Leader. It worked like a deck of cards. You picked a card from the top, which described an event, optionally set some internal simulation state, and then let the player make a decision. Depending on the decision the player made, new cards would be shuffled into the deck (so to speak) and some would be shuffled out, so that the story would be different every time the player played the game, led by their own choices. It was a way to do narrative that still left a lot of agency to the player. 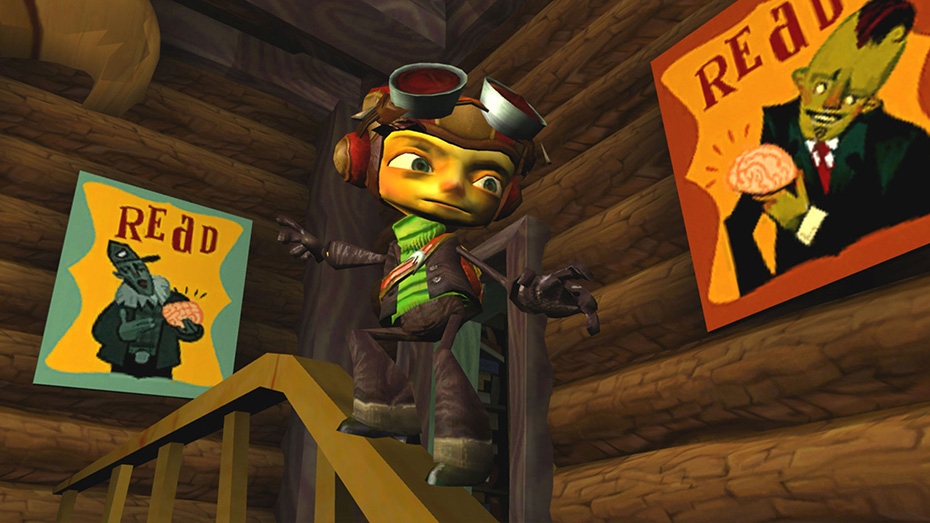 SH: What's your biggest source of inspiration in programming games?

AK: I really love following people on Twitter who post interesting procedural experiments or screenshots of strange games they're working on. I also love going to conferences like the Game Developers Conference (GDC), especially to see the Experimental Gameplay Workshop and the Game Design Challenge, because it reminds me how incredible the games medium is and how much is possible with it.

When things get tough and I'm working late on a game, I do little searches on Twitter or on a forum, looking for a nice comment about a game I'm working on or have worked on, because it really helps to know that someone out there is excited to play it. It helps me get through those difficult deadlines. 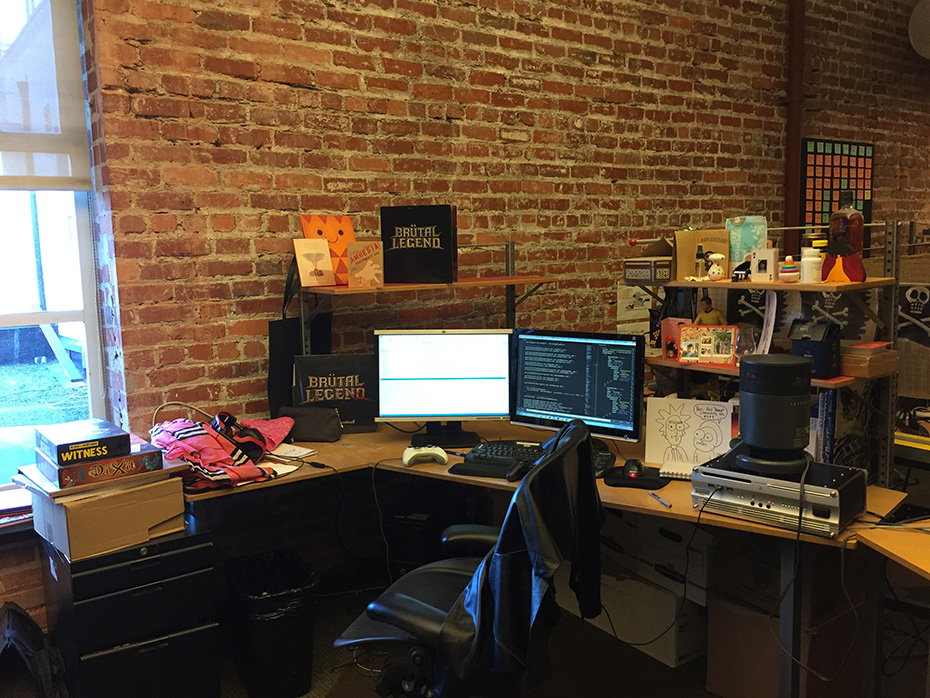 SH: Is there anything you think you uniquely offer to the table in the gameplay programmer role as a woman?

AK: I'm not sure whether it's because I'm a woman, necessarily, but what excites me about games can be quite different from what my colleagues like. It's better for the game you're working on to have a diversity of opinions and life experiences on a team. It contributes unique perspectives that are palpable in the resulting game. For example, I am personally very passionate about music and study it in my spare time, so if you come across a music puzzle or mini game in a Double Fine game, chances are I probably designed it, programmed it, and sometimes even voiced it (I played the purple flower in Once Upon a Monster). 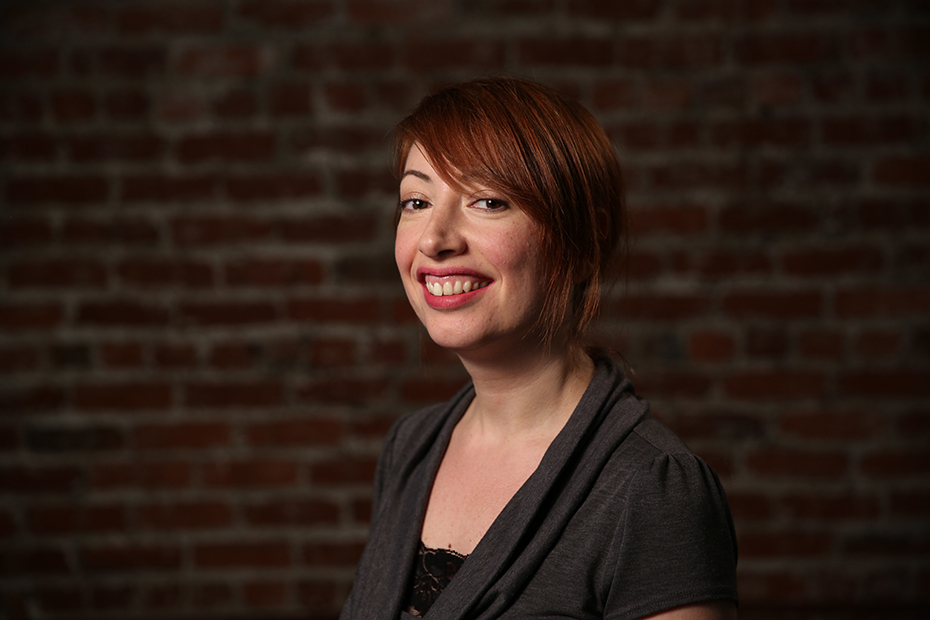 SH: Psychonauts 2 is a very highly anticipated game. Anything you can reveal about it at this point?

AK: I don't know how much I can say without getting in trouble with Spaff [Double Fine community manager James Spafford], but it's safe to say there will definitely be a young Psychonaut entering brains.

Want to learn even more about how games are made? Click HERE to check out our interview with Telltale and Ubisoft narrative designer Jolie Menzel.