9-year-old Annelise Forbes is a singer from Ontario, Canada, whose incredible rendition of the Frozen hit "Let It Go" became a viral sensation! 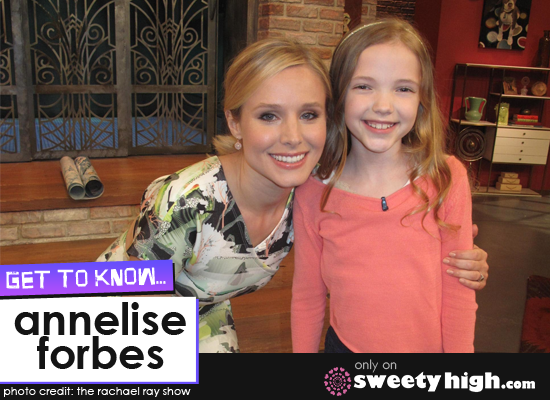 We recently spoke with the young artist about her passion for music and her hopes and goals for the future!

Annelise Forbes has been singing for five years, since she was just 4 years old, but only this February did she start taking proper singing lessons.

"I love singing because I love music and I would like to make my own music someday," she said. "I am also learning the piano and accordion. I have always been putting on shows since I was little and even getting my neighbourhood friends to join me."

Some of her biggest inspirations are singers from her favorite musicals.

"My favourites are Kristen Bell, Idina Menzel and Kristen Chenoweth," she said. "I love each of their voices and they sing some of my favourite songs."

Some of her very  favorite songs come from the musicals Frozen, Wicked, Annie, The Lion King and Shrek The Musical.

She decided to sing "Let It Go" because it became her favorite song after watching the Disney film Frozen.

"I wanted to try singing it because it seemed difficult, but amazing," she said. "I also really love 'For The First Time in Forever.'"

Annelise recorded the track with help from her uncle, Jesse Pitcher, who runs a recording studio, and posted the video to YouTube. Within just months, the video has drawn in more than 700,000 views!

When Annelise saw that her cover of "Let It Go" was getting so many views, she was surprised, but thrilled.

"I also felt kind of overwhelmed because it was unexpected," she said.

It only helped Annelise that the song had meant so much to her personally.

Her version of "Let It Go" also generated attention from big media outlets, and she was featured on People magazine and Good Morning America!

"It made me feel happy," Annelise said.

She was also invited to appear on the Rachael Ray Show.

"That was so awesome," she said. "Everyone was so nice and I got to meet Kristen Bell."

Every year, Annelise records songs around Christmas to share with her family, but this year, she will also post the songs on iTunes. All funds will be donated to the LivWise Foundation, in honor of the young singer, Olivia Wise, who lost her battle to cancer last year.

When Annelise grows up, she has plans to continue being a singer.

"My dream is to be a singer on Broadway and I will need to practice my singing a lot," she said. "Being in New York was amazing, it is such a big city!"

To keep up with Annelise as she creates more music, be sure to check out her social pages below! You can also share your own musical journey with us at SweetyHigh.com!