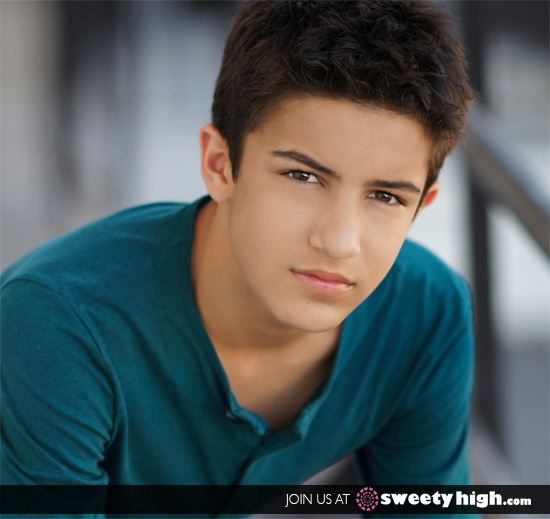 We recently  spoke with Aramis about growing up as an actor and about his awesome experiences filming Ender's Game!

Aramis Knight started acting when he just was 5 1/2.

"I was too young then to know that I wanted acting to be my job for the rest of my life," Aramis said.

He finally realized how much he really loved acting when he starred on the CBS drama NCIS.

"That's when I really first started loving acting because it was one of my favorite roles to play," he said. "Before that I was always just the little kid with one or two lines, but right then and there was really when I got a great role that I loved to play."

Aramis has previously appeared in movies including The Dark Knight Rises. He now stars as Bean in the upcoming science fiction action film, Ender's Game!

"Ender's Game is based off a book written in '85," Aramis explained. "It's about kids from Earth called prodigies who are brought up to an international space station and trained to be soldiers, to be murderers, basically."

These young soldiers are trained not just physically, but also mentally, at Command School to defeat an alien race called the Formics, or "Buggers."

"These characters are so young," Aramis said. "My character Bean is 11, and for them to be trained to kill another race, even if it's an alien race, is very coldblooded. It's cool to see how all the characters react to that, and it's a very deep and touching story."

Aramis' character, Bean, is the smallest and youngest at the Command School.

"Bean is an interesting kid, and he's definitely a tough cookie," Aramis said. "He is the one who looks like he would be picked on, but he proves himself pretty quickly."

Aramis said he could relate to Bean on the set of Ender's Game, as he was younger than costars Asa Butterfield, Khylin Rhambo, Suraj Partha, Hailee Steinfeld, and Abigail Breslin.

"I really had to prove myself, just like Bean had to prove himself in the battle school," Aramis said. "He is constantly doing something to one-up someone else just so he won't look like a little kid. It's such a great underdog story. Everyone always loves the underdog, and Bean is definitely the underdog in this movie."

In one scene, Bean steals a tether from the ship's clean up crew and uses it to swing around a gate, which allows him to spy on his alien enemies.

Aramis believes that young viewers who haven't read the books will be drawn in not only by the intrigue and action of the storyline, but also because of the film's incredible special effects.

"I can't stress more how amazing it looks," he said. "The cinematography and all the CG put into the movie just look amazing, and everyone is talking about how stunning it's going to be and really live up to all of these expectations. It's going to be nothing like you've ever seen. It kind of reminds me a little bit of Avatar, just the beauty of where we are in our surroundings."

The film also gave him a chance to work with some veteran actors, including Harrison Ford and Ben Kingsley.

"It was really intimidating in the beginning. They're both legends," Aramis said. "There's Gandhi and Han Solo and Indiana Jones right there. We wanted to live up as best we could to them, which is difficult, because they've been doing it longer than all of us have been alive. It was intimidating but both of them are very nice guys, so it became easy to feel comfortable and feel like we could do our best even with them there."

One of the themes apparent in Ender's Game is the amazing potential young people have, and how devastating that can be when that potential is used for war.

The film makes it very clear that the Buggers aren't plain villains, but complex characters on the other end of a terrible war.

"In a lot of sci-fi, aliens are green, and they 'come in peace,' but in this movie you really feel for the aliens," Aramis said. "You really see the expressions on their faces and the love that they have. They have these humanlike aspects to them."

The humanity the Command School trainees see in the Buggers complicates what they've been trained to do.

"It's definitely a touching story because when I first saw those Buggers on set, I could see a lot through their faces without them even speaking," Aramis said. "You could see their emotion. You could see if they were sad, if they were mad, if they were happy. All the design teams and the people who created those buggers really did a great job."

P.S. We think Aramis Knight has the perfect show business name! We asked him about the origin of that name.

"I search the meaning of my name online all the time and a bunch of different stuff comes up and I don't know which one is true, but I know my mom named me after one of the three musketeers," Aramis said. "She was watching The Man In the Iron Mask, I think she was dating my dad at the time, and she said whenever I have a baby boy, I'm going to name him Aramis."

Are you a science fiction fan? Share your favorite sci-fi moments with us at Sweety High!