Arielle Chats Making It In "California"!

Arielle is a rising singer-songwriter who has caught the attention of fans across the world with the beautiful but blistering pop track "California." We recently spoke with the artist about her musical journey and the causes she holds close to her heart! 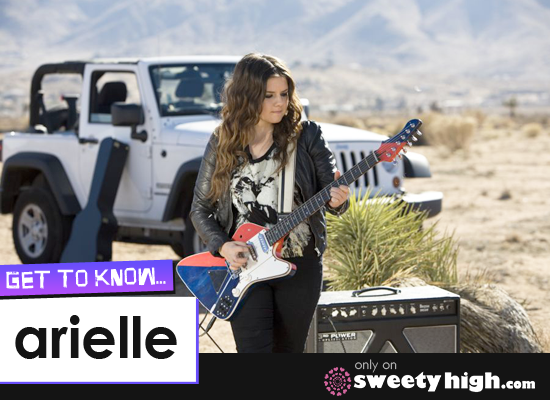 It didn't take long for Arielle's talents to get noticed. She was just 5 when a teacher pulled her parents aside and told them that she thought their daughter had big singing potential and should take lessons.

Soon afterward, Arielle's parents enrolled her in a choir.

"That was a couple of times a week for two or three hours," Arielle said. "That's where I learned how to play piano and read music and that's how I became very passionate about it."

From then on, Arielle's love for music just continued to grow.

"I like to think music has become my first language," she said. "I tend to express myself better that way than I do talking, and it's universal."

When Arielle was about 15 years old, her parents urged her to get a job to make some money and learn to support herself. Though she had never considered it before, she naturally decided to pursue a career in music.

To foster her talent, she did independent study in high school, allowing her to spend time at home to practice and become the best musician she could possibly be. She graduated from high school early with her sights on the Musicians Institute in Hollywood, California.

"I said, "This is what I have to do, I have to go to Hollywood, I have to be around people who understand and maybe who know what they're doing, and make my own way,'" she said. "There's still this idea that Hollywood and L.A. is the place to make it happen, and it truly is."

She moved to L.A. to attend the Musicians Institute when she was just 17.

But moving to Hollywood didn't make things happen immediately. Arielle struggled to stay herself while trying to live up to the city's expectations.

"There's this idea of California being where everything happens, where I could make anything happen," she said. "When I got here, I kind of gave myself away and lost myself, in the midst of people and expectations and requirements. I wasn't happy."

Arielle started to make little changes to her style to suit other people. But those small changes quickly started adding up.

"It's a yes here, a yes there, a little compromise here, and then that becomes becomes who you are, at least outwardly," she said. "I started noticing when those little things built up, when I started wearing things that were not me, when I started not being healthy, not eating because I thought that people had to be a certain weight."

It also started affecting her music. She would even hide her guitar because other people didn't want to see her with an instrument onstage. Eventually, it really started to eat away at her.

"It was my friends and family who finally said, 'Arielle what are you doing? That's what you are. That makes you different,'" she said. "It was the very things that made me different that I tried to hide because other people didn't understand them."

"I really lost myself," she said. "But in the end I feel there was a turnaround. I realized that and kinda had to rebalance that and allow me to be myself again."

In February, Arielle released the music video for "California," which was filmed throughout Southern California. It was directed by Rage and Jared Milgrim.

"We went out to Hesperia, out in the middle of the desert in Palm Springs. It was all around L.A., but we wanted to make it look like we were traveling really far, and we actually ended up traveling about 300 miles that day," Arielle said.

During the crew's long drive, they traveled through snowy mountains and blistering deserts before heading down to the Santa Monica Pier and ending on Hollywood and Sunset Blvd.

"We didn't want to be too direct with the lyrics," Arielle explained. "We used the imagery with the story that the music is telling. The kind of melancholy feel when I'm driving the Jeep, singing 'I've been chasing dreams.' You can feel the excitement by the hair blowing in my face, but there's still this inquisitive, introverted thing going on."

Arielle and the directors hoped to keep the music video simple to let the music speak for itself.

"Everybody was super passionate and hard working," she said. "It's kind of like a dream when you look back at it. We got a great product out of it."

The video also featured Ric O'Barry from the Dolphin Project, an organization Arielle has been involved with for 14 years that aims to end the exploitation and killing of dolphins around the world.

O'Barry's book, Behind The Dolphin Smile, raised Arielle's awareness of the cause when she was 10 years old.

"I was the girl who would tell people I wanted to be a dolphin trainer and a marine biologist," Arielle explained. "I'd always go to the library and read dolphin books, and this one was about the dolphin trainer for Flipper back in the 40s and 50s. He realized how harmful it was for the dolphins emotionally and how they really didn't want to be there."

This realization led O'Barry to devote his life to rescuing dolphins and bringing awareness to the cruelty of the way they are treated in dolphin shows.

"I approached the Dolphin Project and told them what I do and who I am and why I love them so much and they've become half of my life," Arielle said. "I want to be able to have a stronger voice so I can raise awareness about this."

Arielle said she is extremely proud of the big strides being made to protect dolphins, including orcas. A new bill in California aims to ban killer whale shows in the state.

"Dolphins, whales, and any cetacean species are so incredibly smart," she said. "The ban in California is huge."

On April 22nd, Arielle will also be sharing the stage with the classic girl power rock bands Heart and Joan Jett and the Blackhearts at Kiss the Sky! The Orca Freedom Concert.

"Heart and Joan Jett both dropped out of the Sea World concert they were putting on, so we're putting on a new concert to raise awareness for the orcas," she said.

Arielle is also gearing up for the release of a self-titled EP. All of the songs on the EP were recorded live!

"We wanted to bring back the classic rock element of music. Just the old school, 'let's get a band together' vibe," she said. "I think live is where the energy is at so we really wanted to capture that."

She described it as an interesting body of work, including upbeat tracks, a ballad, and even a Queen cover. The EP will be full of harmonies and guitar solos, with emotional songs that each tell a real story.

We absolutely cannot wait for Arielle's EP to be here! For even more on the artist, check out her social pages below. Have a musical dream of your own? Join us at SweetyHigh.com to share it!