If You're Having Trouble Keeping Up in Class, The Art of Visual Notetaking Might Help

Taking good notes in class is really important, but do you ever feel that the more thorough your notes, the less you actually absorb in the moment?

There might be a good reason for it. People are visual learners, and for some, the key to learning and memorization is using imagery, rather than just sound and text. That's the premise behind The Art of Visual Notetaking, a new book by illustrator and author Emily Mills that's all about the power of visual communication. When I was sent a copy for review, I was curious to discover how images might help me unlock my own learning potential.

The Art of Visual Notetaking is a 128-page guide to learning to take better and more memorable notes by incorporating illustrations and visuals into them. Author Emily Mills calls them visual notes, or sketchnotes, and finds that they're much more effective than words or pictures on their own. 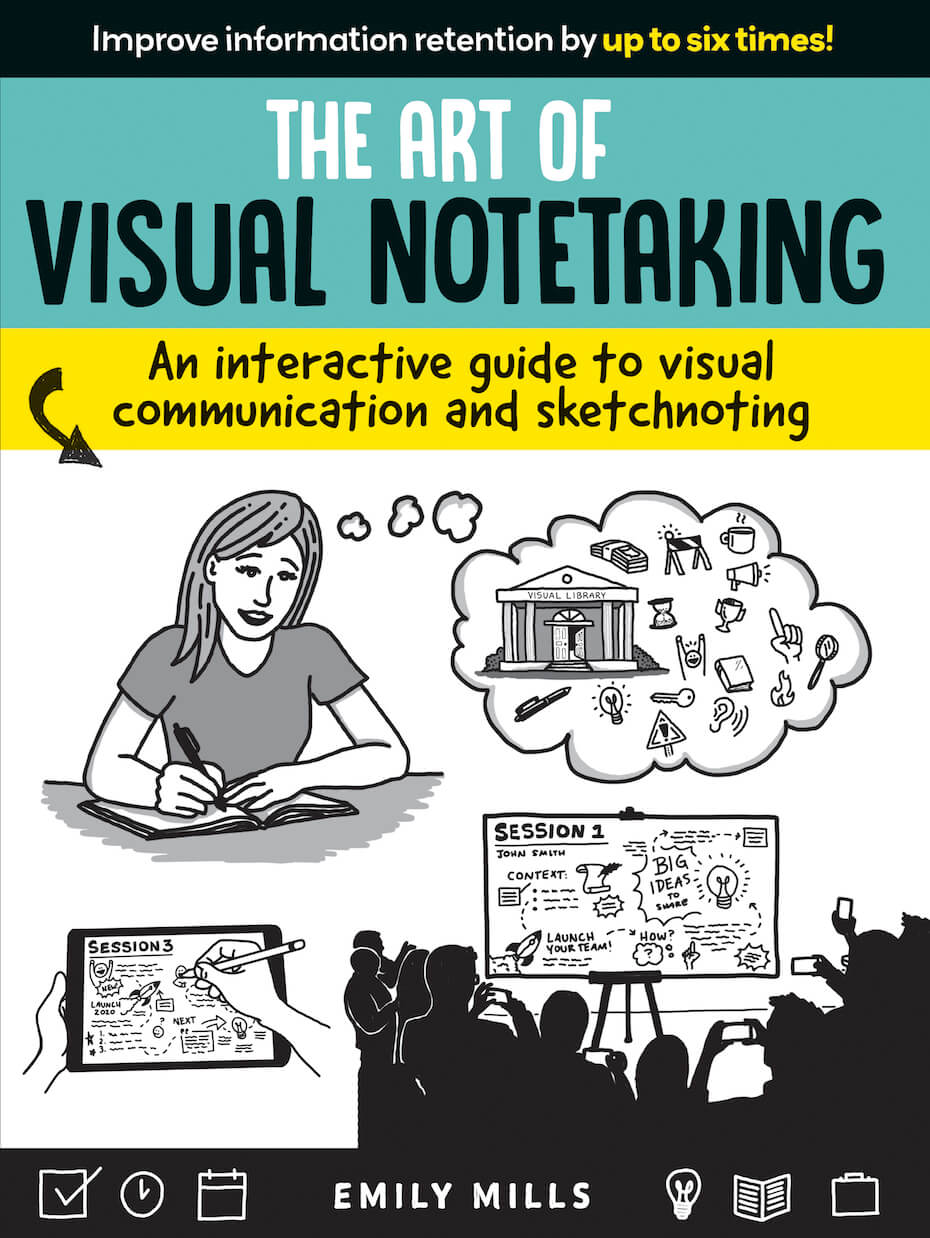 (The Art of Visual Notetaking via Quarto Books)

That's because—according to the book—the combination of adding in visuals and rendering them by hand engages different parts of the brain, making information up to six times easier to retain. When implemented properly, that could mean you're actually learning while you're taking notes in class, and not just when (and if) you go back and read your notes later.

By sketchnoting during a lecture, or after an experience you want to be able to recall later, you can commit that knowledge to memory in an entirely new way. If you ever find it easier to recall something that happened in a movie than something you read, it might be this visual component that'll flip the switch and get you on track to learning more efficiently.

According to the book, the most important factor in sketchnoting is doing them by your own hand. That means you can take notes on loose sheets of paper, or in a notebook, or a whiteboard, or even digitally on a tablet, as long as you're physically writing and drawing everything out yourself. There are pros and cons to each of these methods, which are outlined in detail. While sketchnoting requires a lot of practice and preparation, it can have huge benefits for the person taking the notes—and anyone else they want to share with.

Of course, taking good notes isn't just about committing everything you hear to paper. The book also offers up some really sound advice on how to become a better listener, both in the classroom and the outside world. It also teaches some handy cues that'll help you recognize when someone is about to say something important, which is beneficial regardless of whether you're taking notes.

And since visuals are the key to sketchnoting, the book provides a lot of great information about learning to draw, as well as visually organizing your thoughts in a way that's both clear and attention-grabbing. For example, different types of lettering will make your headings and important quotes stand out. Even if you don't have much in the way of artistic skill, you can learn a lot about creating simple but recognizable shapes to convey meaning, and building on your skills until you're proud of your creations. For example, there's an entire section on learning to draw simple but expressive people to demonstrate any emotion you might want to convey. It states that successful sketchnoting starts with what you know, and eventually building up the bank of things you can draw until you can pull almost anything out of your sleeve to take the best and most memorable notes possible.

There is a lot of information to absorb here, but thankfully, the book itself implements the easy-to-understand sketchnoting tactics it discusses, meaning the pages are never overwhelmed by walls of text without visual context. And because the hands-on aspect is so important, there are also blank practice pages throughout to allow the reader to test out their newfound skills and work all the way up to sketchnote mastery.

Not being a student, it took me a little while to figure out exactly what types of visual notes I might want to take with the knowledge I'd gleaned. While I'm in a number of meetings every week, they're typically action item-based rather than the type where I have to take copious notes (if I'm taking any notes at all). If I'm creating a wireframe for a website feature, I want it to look as clean and simple as possible, so illustrations don't really have a place there.

But it all became clear when I got back into trying to learn Japanese. Once upon a time, I knew the basic hiragana alphabet by heart, and after spending too much time away from it, I needed to revisit and relearn almost completely. Since The Art of Visual Notetaking discusses the idea that thinking of words as a form of drawing, rather than writing, can help to cement concepts in the mind even further, I realized learning to "draw" the hiragana alphabet might be the perfect fit for this project, especially if I could pair additional visuals to them.

I broke out my trusty Parblo drawing monitor and started putting some ideas to paper. First, I created a grid of every letter in the hiragana alphabet, leaving some space below each one for my visuals. In the past, I've heard of people using mnemonic devices (or building associations) to memorize this alphabet, so I thought it would be fun to do that in a visual manner using my own ideas. 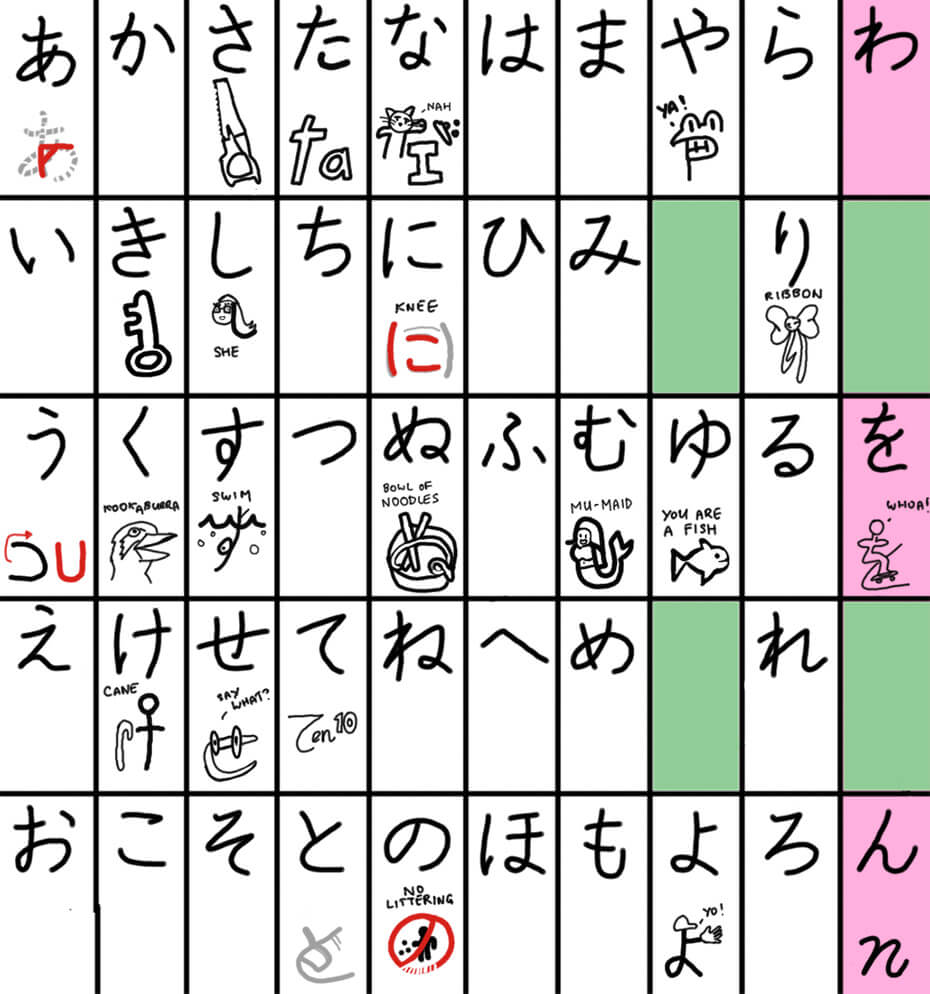 While I'm not even close to coming up with visual representations for each one, I've had a lot of fun in creating them, and that simple action has helped in the memorization, too. While this might look pretty random to you, it makes all of the sense in the world to me. For example, in my head, the を (wo) symbol looks just like a skateboarder doing a kickflip over a ledge and saying "whoa!" Once I build out the entire list, I'm hoping hiragana will be second nature to me again.

My methods deviated a little bit from those in the book, particularly because I was learning at my own pace, rather than trying to rush through notes from a lecture, but I still found it really effective. While Emily Mills doesn't mention this, I think sketchnoting can be a huge help in creating study notes at home that will stick in your head and really drive the points home.

And I didn't stop there. I was also struggling to remember the days of the week in Japanese, and thought more visualization might help there as well. I built out another grid with the first letter in English, the Japanese name in kanji, the Japanese name in hiragana and the symbol the day is named after, complete with that symbol's name in hiragana. There's a ton of information here, but being able to associate each day with an image helped me memorize them all in less than an hour, when I hadn't been able to learn them at all in the past.

Though I adapted it to my own use, sketchnoting made the concept super user-friendly to me, and the amazing thing about this one is that it might help other learners, too.

If you're struggling at all with your note-taking game, I think The Art of Visual Notetaking is worth investigating. It's so informational and packed with good ideas, so even if you don't fully embrace sketchnoting, you'll probably learn a thing or two about how to listen better, take more effective notes and create great illustrations.

Maybe I would've been able to learn my days of the week in Japanese perfectly without the aid of visual notes, but the instant associations I've built in my head thanks to linking the words and their drawings make it so simple for me that I can't imagine doing it any other way now. There's so much to learn from this book, and I can't wait to continue sketchnoting.

If you like my sketchnotes, check out the device I made them on HERE with my review of the inexpensive Parblo monitor.