Ashley Campuzano is an actress who plays Tiffany Ramos on the Hulu original series East Los High. In an interview with Sweety High, Ashley spoke about her history as an actress and how proud she is to be part of the East Los High cast! 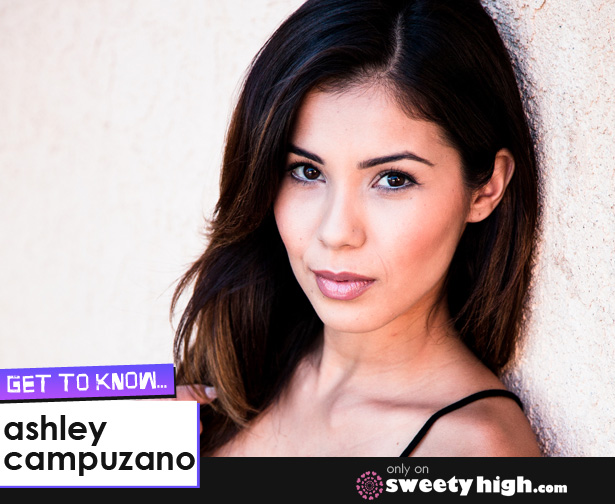 Ashley started dancing when she was just 8 years old. As her skills blossomed, she danced competitively. Then, at the age of 18, she entered the professional cheerleading world as a cheerleader for soccer team Chivas USA.

"It really get helped me to get into the acting business, because we would perform in front of a lot of people," Ashley said. "It definitely gave me confidence. It really helped me open up and not be so shy."

She got her acting start in commercials before she was cast in a guest starring role on the CBS soap opera The Bold and the Beautiful.

"That was one of my first roles," she said. "And then East Los High was a first big step for my career, when I was cast as a series regular."

Ashley joined the cast of East Los High in its second season. The show is a teen drama that follows the lives of students at a high school in East Los Angeles.

When Ashley checked out the show, she was immediately drawn to its sharp cast and unique perspective.

"Usually, I like to just look at an episode or two from shows and see what the style is before I audition for it," Ashley said. "I watched the first episode of East Los High and then I ended up watching the whole season before my audition because all of the characters kept me wanting to know what would happen next."

She also appreciated that the show reflected her culture.

"What really attracted me to the role and project was the fact that in Los Angeles there aren't a lot of full Latino cast shows," she said. "It's really different and diverse from what people are used to watching. Being a Latina, that definitely made me proud. I wanted to be a part of something like that."

In fact, East Los High is among the first American shows to feature a full Latino cast.

"There's hasn't been anything ever like that, and I don't really know why," Ashley said.

But since it first aired in 2013, East Los High seems to have paved the way for more network television shows with Latino casts.

"I feel like L.A. is getting there," Ashley said. "It's not completely there yet, but they have new shows coming out like Jane The Virgin and Cristela on ABC. With all these things coming up, I feel like there's going to be a big movement."

After four callbacks and a month of waiting, Ashley learned she had booked the role on East Los High as high school Tiffany Ramos.

"I have some of the background that Tiffany has," Ashley said. "I was a dancer in high school. I did pageants. I am in the industry as an actor. And I would say we're similar because we don't necessarily give up on what we want."

Though Ashley and Tiffany's goals are extremely different, Ashley said that the two share the same drive to get what they want out of life.

"I look at my needs and my career, but she focuses on not wanting to give up on a certain guy," she explained. "That's her goal. They're two very different things, but we're both very resilient and we don't stop until we gets what we want."

East Los High is a Hulu original series that airs exclusively on their platform. Ashley said she wasn't worried about being on a show that's not on regular TV.

"With our generation nowadays, it's basically all Netflix and all Hulu," she said. "I don't even really watch TV personally. If I have to catch up on shows, I'll do it after work on Netflix or Hulu."

She said that, while older generations might still be attached to their television sets, hers is totally open to watching a show online.

"I wasn't too skeptical about it because I know that that's how people watch TV now," Ashley said. "I have a bunch of friends who don't even own cable TV anymore, and just own Netflix or Hulu or Apple TV. It's the new generation of television."

Ashley will return for the third season of East Los High when it returns next year! To keep up with all of the latest from Ashley, follow her on her Twitter and Instagram accounts!

Do you love East Los High? Share your thoughts with other fans in our community at Sweety High!

You may also be interested in our latest interview with Paola Andino, star of Nickelodeon's Every Witch Way, based on the telenovela Grachi!