Abigail Harrison is a 16-year-old with out-of-this-world aspirations. She aspires to be the first astronaut on Mars, and is probably known best by her nickname "Astronaut Abby." 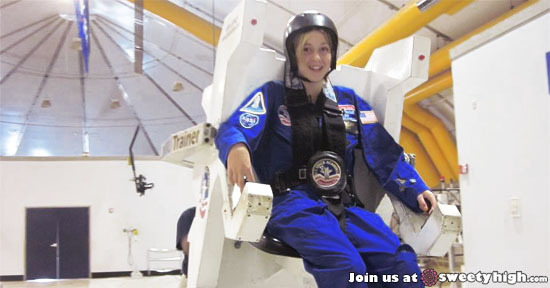 When we spoke to Abby, she was in Denver, Colorado for the upcoming International Mars Society Convention. She will be a speaker at their 2013 STEM Education Event.

Abby told us she first became interested in space when she was very young.

"I was probably about 5," Abby said. "It was an interest that developed by looking at the natural world, gazing up at the night sky and wondering."

When she was very young, Abby didn't even realize astronauts were a real occupation. What she did know is that she wanted to go to space someday.

Her interests were fueled further by a love of learning about space, and her father's interest in science fiction.

For most of her childhood, Abby knew she wanted to be an astronaut, but didn't really know what steps she'd need to take.

Abby did. She researched the steps other people had taken to become astronauts and found out there were two main paths she could take.

"There's the civilian route, which is to be really good at science," Abby explained, "and the military route, where you have to learn to fly planes. Understanding what I had to do was the first really big step."

Abby is currently considering her options for college. Weighing heavily on her decision will be whether she decides to join the military to get flying experience.

Whether or not she follows a military career, she plans to get a pilot's license, and science will continue to play a big role in her education.

"The science part is very important," Abby said. "Not only do I have a passion for space travel, but I also really love science."

Abby first became interested in Mars by observing it in the night sky.

"When you're a kid, you notice that one of the stars stands out," Abby said. "It glows almost red, and there's something different about it. It really catches your eye."

Later, she learned the glowing ball of light was not a star, but Mars.

"Mars is also the most viable place for us to go next," she said. "It's the place we have the most to learn from."

Abby closely follows any news from the Mars rovers, Opportunity and Curiosity. The more she learns, the more excited she gets about the prospect of traveling to Mars.

Abby's mentor is Italian astronaut Luca Parmitano, who is currently aboard the International Space Station. The two met by chance two years ago in Denver at the final launch of the Endeavour space shuttle.

"Ever since then we've stayed in touch," Abby said. "He has been an incredible help to me in understand what it's like to be an astronaut, and what to expect and the sacrifices you have to make. He's given me words of advice that have really impacted me."

Abby isn't just interested in space. She's an avid gymnast who spends a lot of her time in the gym practicing. She also loves reading and doing crafts, though she admitted she doesn't have a lot of extra time to do them.

A huge inspiration for Abby is her appreciation for science. Education plays a big role in Abby's life.

"STEM education and programs are the most important thing we can invest in for education," Abby explained. "Science, technology, engineering, and math are truly what are going to make our society better. They're such an integral part of culture and everyday life, and we need people to be more involved with them."

Abby added that while not everyone needs to go into STEM fields, everyone should have some basis in STEM education.

STEM fields are often dominated by males rather than females, but Abby believes that's becoming less and less of a issue.

"I haven't really noticed a big disparity," Abby said. "Sometimes when I talk to little kids, they have this idea that it's only for boys, that their little sisters can't do the same things. But I think most girls today understand that it's equal."

Abby has met a lot of girls who also want to be astronauts. She believes other women will be on the crew of her rocket headed to Mars.

"What I would tell younger girls who are interested in the sciences is that they can definitely do it," Abby said. "They shouldn't listen to anyone who tells them they can't do something. Even if they encounter hardships in school, it doesn't matter, because once you graduate, it doesn't matter what your gender is. When you go into the workforce, everyone who has knowledge is valuable."