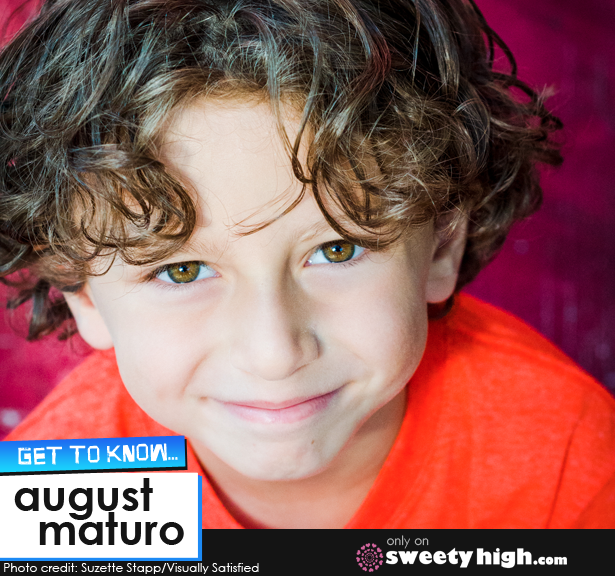 We recently spoke to the young star about his history with acting, and why he's so passionate about Girl Meets World!

August Maturo started acting when he was just 4.

"In my heart I always wanted to be on a stage, so my mom found me an agent," he explained.

From there, August nabbed roles on How I Met Your Mother, Dads and Raising Hope.

The young star is also extremely intelligent. He could read and write by the time he was 2!

August's smarts came in handy when it came to auditions and acting, even when he was just 4.

"I could always read my own scripts!" he said. "I memorize everyone's lines!"

He currently stars as Auggie Matthews, the son of Corey and Topanga and little brother of Riley, on Girl Meets World.

He described the experience simply as "Amaaaaaaazing!"

August admitted that he had never seen an episode of the original Boy Meets World before he was cast in the new show.

"But after I was cast, I watched all of Season 1 because they are appropriate for my age!" he said.

August and his Girl Meets World character Auggie may share a name, but they're not completely alike.

"I am different because I am not so girl crazy!" he said. "I am like Auggie because I'm smart and I'm a good boy."

Asked to name his most memorable role, it was tough for August to pick just one.

"I remember all of them, and they were all great!" he said. "But my first role was the pilot 'Applebaum' directed by Christopher Columbus, who directed Home Alone 1 & 2, AND THOSE ARE MY FAVORITE MOVIES! That was so exciting!"

Just shy of his 7th birthday, August has already accomplished a lot with his acting career. But he told us he'd love to branch out even further.

"One day I would love to be a singer!" he said.

For even more on August Maturo, be sure to check out his social pages below! Tune in to Girl Meets World on the Disney Channel on Fridays at 8:30pm/7:30c, and join us at SweetyHigh.com to talk about all things Girl Meets World!