Autumn de Forest is a 12-year-old painter from Las Vegas who has impressed art collectors and fans across the United States with artistic talents and wisdom beyond her years. Outlets including The Huffington Post and Forbes have called her a prodigy. 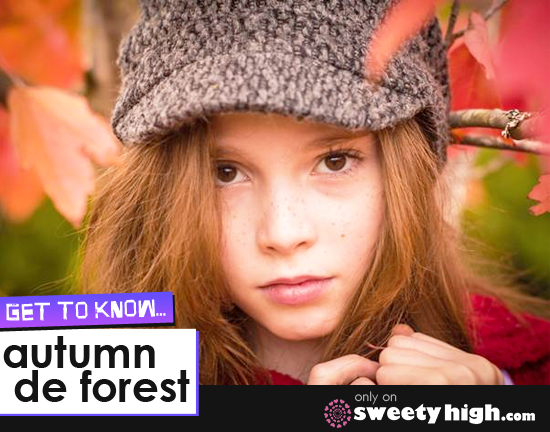 We recently spoke with the young artist about her experience as an artist and the things that matter most to her!

Autumn de Forest's exposure to art began at the age of five, when she saw that her father was staining wood and asked if she could participate.

"I picked up some stain and a paintbrush and I just started," she explained. "At that time I wasn't even really expressing myself. I was so young. I was just playing around, seeing what would come out. My parents turned around and I didn't quite understand what they were so surprised about."

From there, Autumn continued to paint. She moved on to bigger canvases, and started working with oil and acrylic paints.

"Usually I didn't even paint with a paintbrush," she said. "I painted with garden tools. I went outside and there were these little cactus things, these long things, and when you slap them together with paint it makes these really interesting splashes."

When she wanted to display her artwork at the age of 6, her parents enrolled her at an Art in the Park event. She was the only kid there.

"I went up to people and stuck out my hand and just greeted myself," she said. "It was the first time showing my artwork to random people, and that the very first time that I was asked all these interesting questions about my art."

The adults at the show were interested in what mediums she used, what inspired her, and how such a small girl could reach the center of her large paintings!

"It was very interesting, and that moment when I started to seriously get into painting I realized that I wanted to change the world for the better with my art," she said.

From the time she was 5 to about 7 years old, Autumn de Forest was interested primarily in abstract painting. She didn't feel she had a point to get across. She just wanted to create, she explained.

But between the ages of 8 and 11 she grew more and more interested in pop art.

"When I started getting to be older I loved Lichtenstein and Andy Warhol," she said. "I love them just taking everyday things that sometimes we take for granted and making them into art."

While Autumn is perhaps best known for her paintings, she works across various artistic media. She has worked with everything from chalk to cement and plaster to caulk, wood and even melted crayons.

"That's a technique called encaustic," Autumn explained. "Jasper Johns made it really famous. He melted beeswax, and then mixed paint into it. I melt regular crayons and use it to make this really interesting technique."

She's also done work to make her art more three-dimensional, such as cutting wooden balls and gluing them onto paintings as beach balls.

Out of all of the mediums, Autumn said painting is her favorite. She has a particular fondness for acrylics.

"It's very easy to use," she said. "It doesn't get so messy and it dries very quickly. You can do a lot of things with it. But I also love to work with oil. it's great for mixing and it makes things look to sophisticated and well done."

However, oil paints can be extremely messy. Autumn explained that oil paintings she created over a year ago are still wet in parts.

When it comes to creating a new work of art, Autumn looks to the artists that came before her.

"I love being inspired by different artists, she said. "I've never taken an art lesson in my life. Whoever I'm inspired by at the time is my teacher. As I learn about him and do research and read I feel like I'm working with him."

She also loves to rework classic paintings with her own Autumn de Forest touch. For example, she created her own version of the classic American Gothic painting by Grant Wood to create American Graphic.

"It's the one with the woman and the man, and he's holding the pitchfork," she explained. "I love taking classical paintings and mixing them with my personality. I put a crayon in place of the pitchfork."

She also made her own version of Andy Warhol's pop art portrait of Marilyn Monroe, based on a Barbie doll version of Marilyn from The Seven Year Itch, which she received from her grandmother.

But sometimes a painting can take a bit longer than Autumn imagined. When she was 7 years old, she envisioned a painting of a rainbow made of many colors. At the end of the rainbow would be a door.

"I was so excited, but as I did the rainbow it just did not look good," she said. "It was skinny and weird and not perfect, and I was working with oil stick, so there was no way I could redo it. I cried and I cried because I was looking at this image in my mind and I was so devastated it didn't work."

Autumn's best option was to keep her head up and try something else, so she did.

"I took some oil sticks and did this figure, and I stepped back and I loved it," she said. "I went back to my image of what I had originally wanted and I realized this was so much better. When I saw what I'd just done, I saw so many things wrong with what I'd wanted before."

Autumn rarely gets stumped when it comes to creative ideas. Rather, she can get stuck on paintings because she wants to make them the absolute best that they can be.

"It's interesting because my goal is to make my painting better," she said. "Is it colored wrong, should it be a little different? It can go on for such a long time, and then I'm never finishing the painting. I can get blocked in that way. But when that happens I go into my art books and I try to find something that can bring us to the home stretch and make it into something that would make it even mean more to me."

For Autumn, the creative angle is one of the most rewarding aspects of being an artist.

When it's time to buckle down and actually paint, Autumn becomes incredibly focused.

"I go to this place in my imagination called the white room," she said. "It's a room and it's all white and it has no distractions. The only things there are my tools, the painting and me."

When she tunes into this part of her imagination, she said that she feels like there's nothing around her, and she can focus on painting for hours at a time.

"I love being able to be in this mode," she said. "There's no inspiration around me but I can see and do my art without any distractions. It's one of my favorite parts about what I do."

Park West Gallery founder and CEO, Albert Scaglione, recognized Autumn's "gift" and unlimited potential to become one of the truly great artists of our time. It followed that Scaglione offered to mentor Autumn and give her a platform on which to launch her career as an internationally recognized and respected artist.

"The art of Autumn de Forest already exhibits a maturity and depth that many artists never achieve," Scaglione said. "She is an amazing person, an avid reader and a sponge for all that is good around her. She and her parents have chosen me to be her art dealer. It truly is a serious responsibility but more so a blessing."

Autumn is also a staunch advocate for keeping arts education in schools.

"When I heard that they were taking art out of schools I was absolutely devastated," she said. "We're putting our future and generations after it in jeopardy. As generations and generations go by, is there even going to be any art in schools? The school kids made in art class isn't necessarily the best art  but it can inspire so much."

Autumn said that it's not enough for schools to encourage parents to pay for private lessons outside of school, because such classes can be very expensive and unaffordable for many families.

The answer are inclusive arts programs in schools, she said.

"One of my big goals in life is to change that," she said. "I tell kids that whatever you love, you can do it, too. Not every kid is going to love art. It could be dance, sports, anything. Don't focus on how good you are, focus on how much you love it."

She wants to remind kids that they're not always going to be good at something the first time they try it.

"They say, I love this but I'm terrible at it, and they just stop," she said. "But the first time won't determine how good you'll be with practice. I want to change the world for the better with that."

Her own personal experience is proof of the importance of the arts.

"Whenever I go in the studio and I see what I've done, and I can just go into a painting and see what can come out, I feel so content and I feel so full inside," she said. "I want to be able to give that same feeling to other kids, not necessarily with art. Whatever you love, you can do it too."

Want to see more of Autumn de Forest's art? Check out her social pages below! You can also join our community at SweetyHigh.com to tell us about your favorite artists and share your own work with us!