Ayden Uhlir: What Girl Power Means To Me 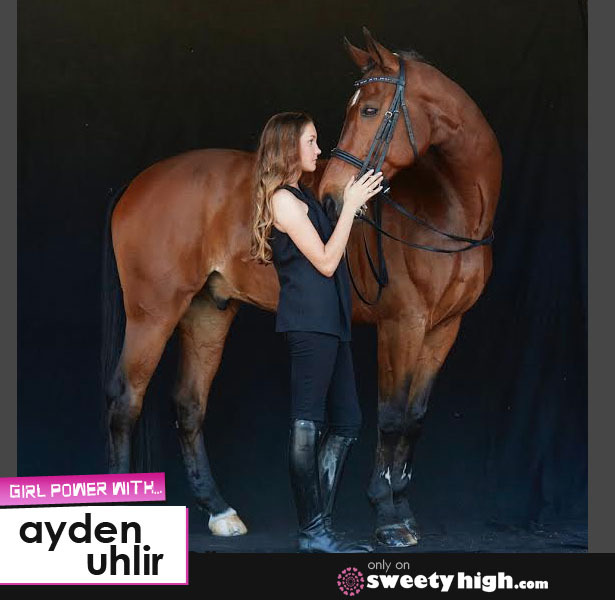 What matters most is your view of yourself, what you value and what you find important. I left 'normal school' in junior high for training and returned for a few months senior year.  I realized then how lucky I was to grow up away from groups, cliques and peer pressure to fit in.  It was easier for me to see coming from the outside that there was so much pressure to be normal and accepted. I got to be me and be strong in who I was and that really is at the core of my power. Don't go out of your way to impress people or be somebody you're not. I always say to just be the best you!

I think that we, as girls, can do anything we want to do when we set our minds to it. We can't let anything stop us. Sometimes we get distracted by things like boys, but boys come and go. You can focus on your goals now, because that's what you really care about in the long run becoming you. I think that's the best thing to be focused on now.

An idol of mine in the non-horse world is Nina Dobrev. She's really into fitness and she has a great head on her shoulders. She's independent and well-traveled and still a really genuine person. I really like when somebody can be themselves and not conform to what other people think that they should be. They kind of don't care what other people think or put too much emphasis on other people's opinions. But I don't think it should be an excuse for being less than you can be.  Not conforming isn't about just not conforming, it is about searching for your true path.

For a long time there's been this perception that women should do certain things should do the work the men don't do, and that women can't do a lot of the things men can. Some women think we're stuck in these roles that were already predetermined for us.  Really, we shouldn't be conforming to anyone else's mold of how things should be based on the past. Sometimes they can influence impressionable girls' minds about what they should be. I saw this one commercial where they talked about girl power and what it's like to run like a girl or hit like a girl. People think to do something like a girl is automatically weak or an insult, but running like a girl can be strong, and hitting like a girl can be tough. We need to change our way of thinking and understand that doing something "like a girl" isn't a bad thing. That is one thing I love about my sport.  It is the only professional sport where there aren't separate men's and women's divisions.  We don't play mixed teams either.  It is a head to head competition between all participants, men or women.  Over the last few decades women have begun to dominate the sport.  So even in a direct competition we are showing dominance.

So, it would bug me as a kid to hear "you hit like a girl." It's demeaning in more ways than one. It's very hurtful to someone who knows they're strong and can do all the things a boy can do.

With being an equestrian it's definitely helped me that I have to be responsible for another living being. I have to be on a schedule and take care of my horses. I like to think that horses, or caring for any animal, do make you a better person.  You can learn to care for something without conditions attached. The horse will never have ulterior motives other than to be loved by you and be cared for. There is a huge bond of trust. You become totally unselfish, and it creates a good balance between your brain and heart. By seeking a partnership with another living creature, especially one that has so much power, you get this strength and self-empowerment. That's what I really like about horses. It makes me feel strong that I can be partnered with such an amazing creature.

Ayden Uhlir is a 19-year-old two-time NAJYRC gold medalist in dressage, a sport which has often been referred to as "horse ballet." Read our interview with Ayden here!