If you pay any attention to viral food trends, chances are that you've seen L.A. dessert shop B Sweet's "halo" ice cream-stuffed donuts.

Yes, the halo's delicious combination of warm, freshly baked glazed donut and cool, creamy ice cream hits the spot every time, but B Sweet has so much more to offer.  I recently interviewed B Sweet owner and chef Barb Batiste and went behind the counter to try even tastier B Sweet treats.

Being the week of Independence Day, B Sweet had a gorgeous red, white and blue version of a red velvet whoopie pie on the menu. Consisting of a classic cream cheese filling sandwiched between two red velvet cakes and topped with a bright blue cream cheese drizzle, it looked and tasted the part. 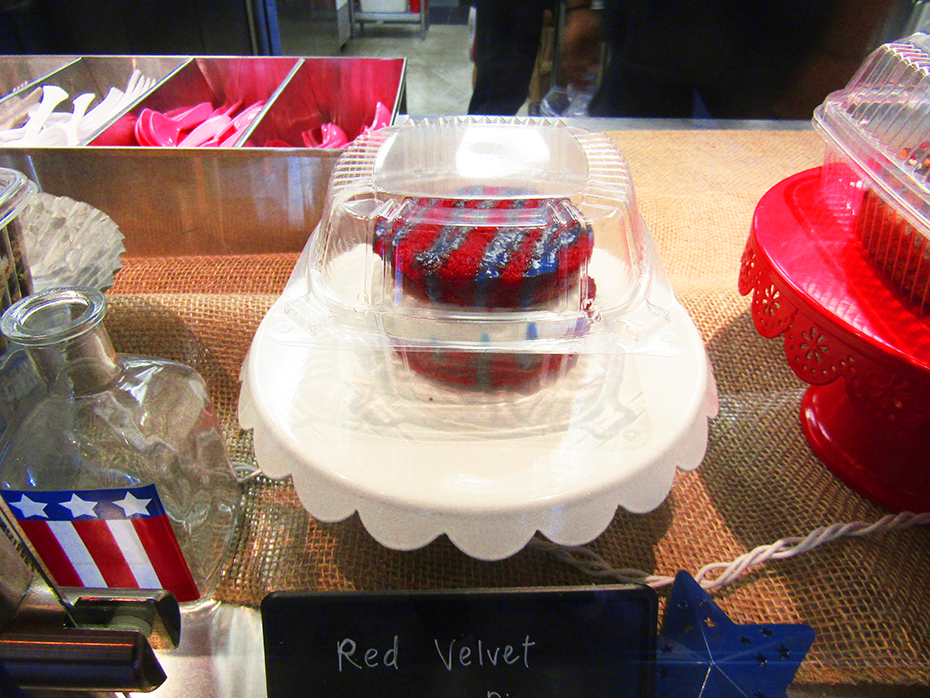 Chef Barb told me that her red velvet is actually one of her favorite things in the whole shop.

"Everyone has a red velvet recipe because it's such a classic southern dessert, but mine is slightly different," she said. "I'm all about adding more butter, more cream—everything bad for you! It's moist and you can really taste the dark chocolate I use in it. A lot of people don't even know that red velvet is chocolate because they're fooled by the color."

She revealed that while she did try using beets and other ingredients to get the signature color of a red velvet cake, she eventually settled on red food coloring, since those natural ingredients gave the cake an odd flavor.

"I do what I can to make it look vibrant without using too much coloring," she said. "I'm okay with using food coloring because I don't use it in a lot of my other baked goods. If people don't like consuming food coloring, there are a lot of other choices for them to choose from."

Digging in, I knew exactly what she meant about the chocolate. This pie wasn't overly sweet like other red velvet desserts I've had in the past, even with the sweet cream cheese. From now on, this might be my go-to 4th of July dessert. 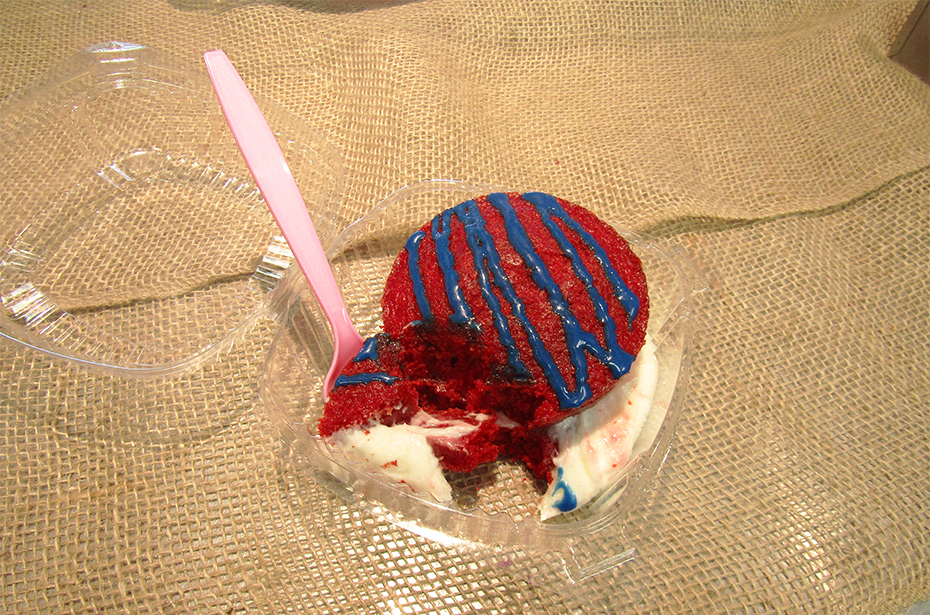 Next up, I was super excited to try out B Sweet's leche flan cake. Barb was born in the Philippines but raised here in the U.S., and you can see her Filipino influences in many of her desserts.

"I like to add a little bit of a Filipino flair in my recipes, but to modernize them a little bit so they're really approachable," she said. "I love using unusual Filipino flavors in some of my desserts."

I happen to be half Filipino, so I was thrilled to see flavors I recognized in the shop. This cake consists of one layer of leche flan atop a stunning purple layer of ube cake and vibrant green layer of buko pandan. 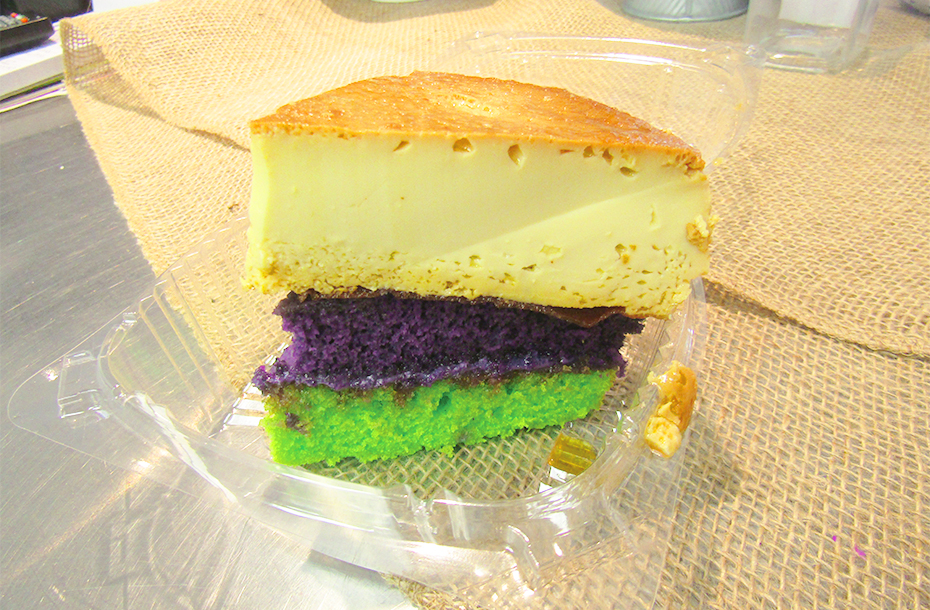 "Buko pandan is an amazing flavor that comes from a fragrant-leaved young coconut that grows indigenous to the Philippines," she said. "People are often confused by the green color."

Ube is a purple sweet potato also native to the Philippines, pronounced "ooh-bay. "

"I thought people might like ube, so I put an ube bread pudding on the menu and it quickly become a favorite," Barb said. "We had a lot of non-Filipino people coming in and asking about trying the "U.B.E." or "oob," and I had to teach them about ube. People often mistake it for taro, which is a root rather than an actual sweet potato. It's tough to describe the taste, I haven't yet met someone who doesn't like it."

When I took a bite, the dessert completely lived up to the hype. I'm not a even a big fan of flan, but the flan layer was creamy and light and complemented perfectly by the sweet ube layer and the fragrant, slightly salty buko pandan layer. I love a bit of salt in a dessert, so I had zero complaints.

Next I tried B Sweet's indulgent take on a classic. This five-layer brownie (topped with a drizzle of chocolate ganache) consists of brownie, marshmallow, graham cracker, Oreos and chocolate chip cookies. 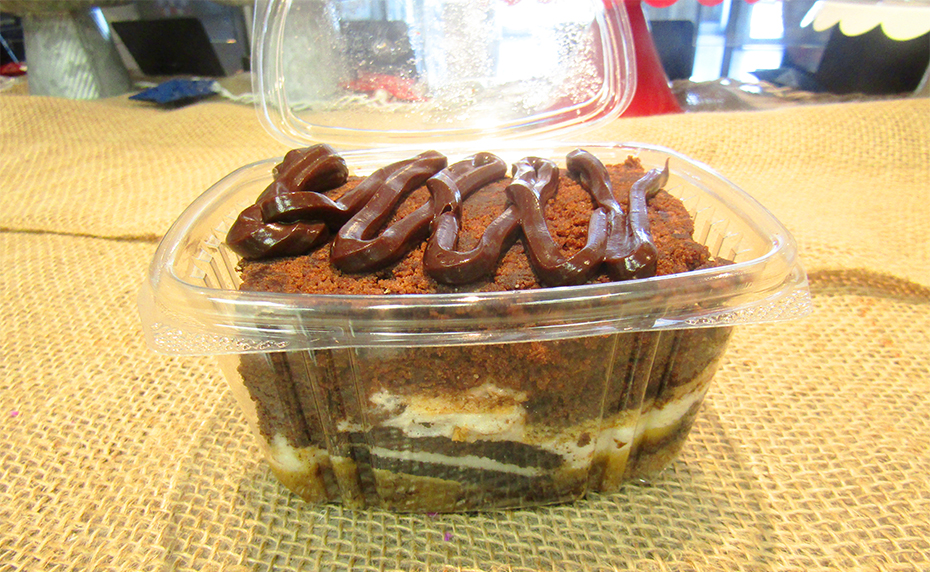 It's seriously as good as it looks—but weirdly I thought it was even better the next day after a night in the fridge. It's tough to go wrong with that many tasty ingredients in one place.

Last but definitely not least, I tasted one of B Sweet's signature bread puddings. While bread pudding may not sound like the most captivating of desserts, they're honestly my favorite thing on the B Sweet menu.

"I love bread pudding, and whenever my husband and I go out to dinner, I always look at the dessert menu first and see if they have one," Barb said.

While most restaurants usually have a classic bread pudding and occasionally mix it up with white or dark chocolate, Barb always wanted to do it differently. Her shop's bread puddings were born almost out of necessity. Instead of donating or throwing away loaves of banana bread at the end of the day, she realized she could make them into a tasty bread pudding for the following day. 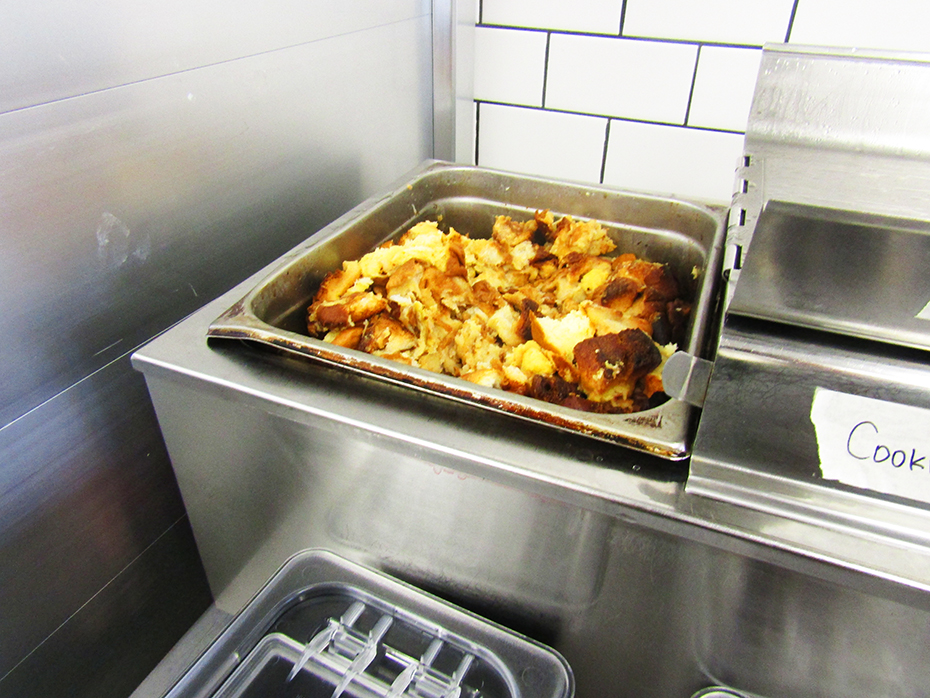 "We sold the banana bread pudding and people went nuts for it," she said. "I realized that if I could do that with my banana bread, I could do it with leftover red velvet or chocolate cake, too. Now I don't have leftovers anymore and I have to bake whatever flavors we're doing in order to make the pudding."

Over time, flavor ideas kept coming, and now the shop has more than 50 different flavors of bread pudding in a rotation that changes every week in the shop.

"Out of everything we sell, the bread pudding is the most popular," Barb said. "Bread pudding is so good, and it's great to always be inventing new flavors."

During my visit, the staff was particularly excited about highlighting yet another dessert inspired by Filipino flavors—a pan de sal bread pudding. Pan de sal are Filipino sweet bread rolls that I ate by the dozen as a kid. The pudding was topped with a drizzle of bright purple ube sauce. 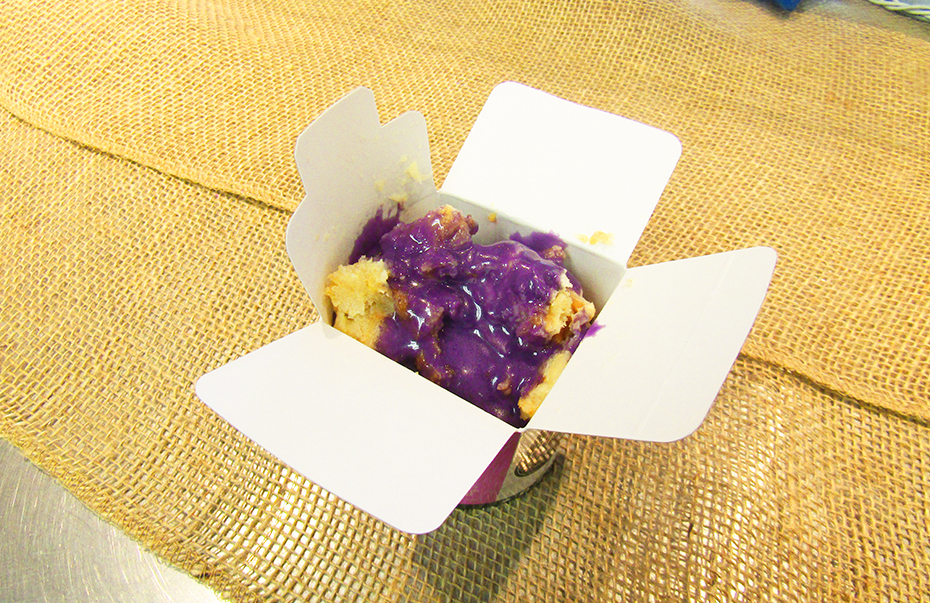 This dessert was way better than the pan de sal I remember eating as a kid. The pudding itself had just the right hint of sweetness, with the ube acting only enhancing the taste. I would order it again in a heartbeat. 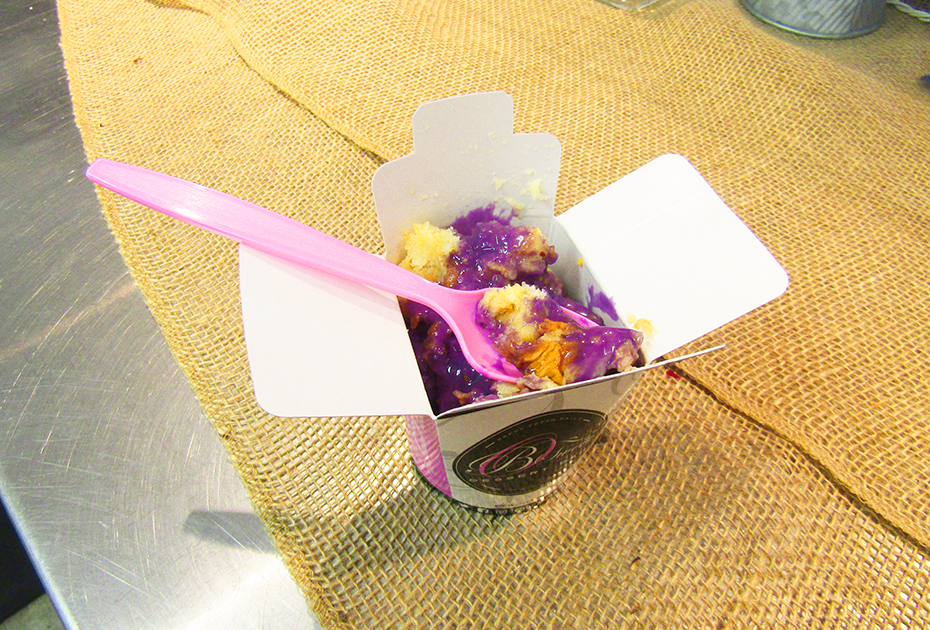 After tasting all of these incredible desserts, the last thing on my mind was eating even more of them, but they sent me home with all of these treats packed up in a bag for me, and even threw in a mini loaf of banana bread with chocolate chips. 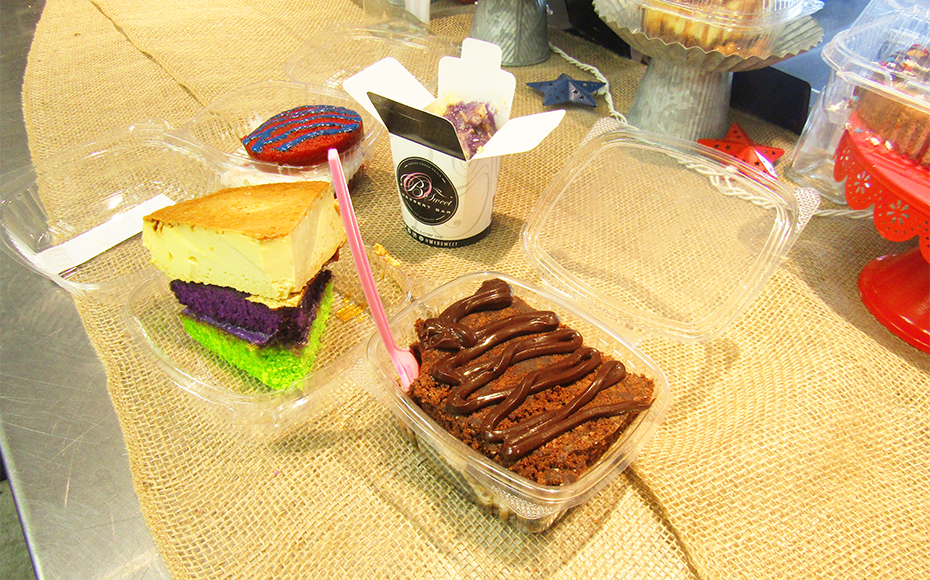 The banana bread was devoured in less than 24 hours. It's safe to say that won't be the last time I visit B Sweet.

Planning to make a road trip to L.A. just to try these desserts? Click HERE to find out more dessert spots you have to hit up in Los Angeles.