You may know actress Bailee Madison best from her role on Wizards of Waverly Place, but the young star has also appeared on hit shows including Once Upon a Time and Trophy Wife. Most recently, she's appeared on ABC Family's The Fosters! 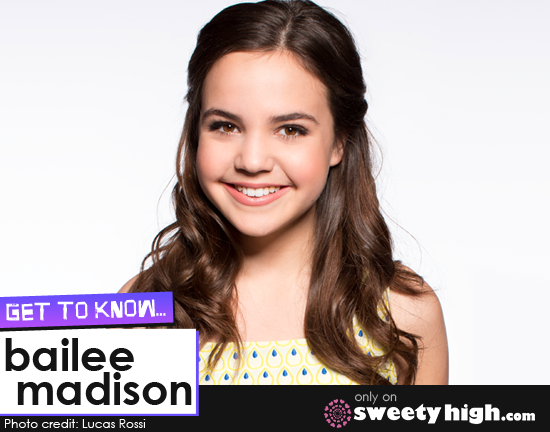 We recently spoke with Bailee about her latest roles, as well as being the youth spokesperson for childhood cancer foundation, Alex's Lemonade Stand!

From the time that Bailee started working in show business, she and and her family were on the lookout for an organization the Bailee could really get behind.

They found what they were looking for after Bailee started volunteering for Alex's Lemonade Stand, which raises money to fight childhood cancer. Founded by 4-year-old cancer patient Alexandra Scott, it raises funds through lemonade stands and more.

"I always joke, because I'm really cheesy, that from the first cup of lemonade that I passed, I knew this was a foundation that I loved and would be honored to be a part of," she said. "Truly the best phone call was when Liz and Jay Scott, Alex's parents, called and asked if I would join their team. I'm so grateful for that and I love being a part of it."

From then on, Bailee has been their youth spokesperson. But Bailee would have been happy to just work with them.

"I didn't care about all that," she said. "I just wanted to be a part of it because I loved their mission and I loved what they stood for, so getting to really truly be a part of their team is such a blessing."

Bailee runs stands for Alex's Lemonade Stand wherever she goes.

"If I'm filming in Atlanta, I'll get the cast and crew together and I'll have a stand," she said.

"I was there at the original stand that she had in elementary school before she passed," Bailee said.

"I do whatever I can, whenever I can," she said. "I love it. I just did a stand in my hometown for the 4th of July, and we had three restaurants doing it. It's really great just getting to have a lot of people learn about it and be a part of the mission with us."

Bailee said that finding a cure for pediatric cancers is so close to her heart because children deserve to live their lives to the fullest.

"We're so blessed and we take a lot of things for granted," she said. "Little things like being a part of a soccer team or going to school or getting to sleep in in the morning and feel good are so important. I  believe children should be able to do all of those things, and the fact is that a lot of them aren't."

Many children with cancer spend a lot of their time coping with their illness, Bailee explained.

"They're stuck in hospital beds or in hospital rooms constantly getting poked with IVs," she said. "I truly believe children are supposed to live beautiful and happy and healthy lives. Even if you hear about childhood cancer, you don't hear enough about it, so we're getting the word out the best that we can."

Bailee hopes that some high-profile roles will allow her to spread that message even further.

She recently joined the cast of ABC Family's The Fosters for its second season! She first appeared in the season 2 premiere, "Things Unknown," as Sophia Quinn on June 16.

In the new season, we learn that Maia Mitchell's character, Callie Jacob, has a half-sister named Sophie.

"They just got to meet each other for the first time, and Sophia wants to know Callie," Bailee said. "She's so fascinated by her and wants to learn more and have a relationship, but as the episodes progress, you'll see The Fosters doing what it does best. There's definitely more to Sophia than meets the eye."

Bailee said she was incredibly excited to land the role and star as Maia's sister, because Bailee is frequently confused for her.

"We had gone back and forth on Twitter for about a year because of people coming up to her and going, 'Oh my goodness, I loved you as Maxine on Wizards of Waverly Place,'" Bailee said. "She would Tweet me and say, 'I said thank you on your behalf.'"

Bailee had a similar experience with being confused for Maia!

"I would write her back and be like, 'No joke, I was literally just in Catalina and a bunch of teenage girls were screaming, saying they love me in Teen Beach Movie, and I also said thank you on your behalf,'" Maia explained. "It was a dream of mine to work with her, being such a fan of hers, and with the fans saying that we should work together."

She said that when she learned she would be on The Fosters she could barely contain her excitement!

"I was filming Trophy Wife and I was in my trailer and I fell down to the ground and started squealing. I totally fangirled," she said. "I'm so excited and so honored. They've been so good to be and I'm ecstatic."

Bailee was also recently cat in the upcoming Hallmark show The Good Witch, a series based on the network's successful series of films starring Catherine Bell.

She starts filming the first season in Toronto in mid-October, and will be filming there until the middle of February.

"I'll be Catherine's daughter, which I'm so thrilled about," Bailee said. "I love Hallmark. They're like family to me and it's going to be a lot of fun."

We can't wait to see Bailee in more exciting episodes of The Fosters and more!

For even more on Bailee Madison, be sure to check out her social pages below! You can also share content from all of your favorite celebs with us at SweetyHigh.com!