Barkbox Is THE Premier Subscription Box for Dogs—Here's Why

Since the number of dogs in my household recently multiplied threefold, I've been spending a lot more time thinking about how to keep my pups as happy as possible.

That, of course, involves a lot of fun toys and tasty treats, and inevitably, my Instagram searches for the perfect goodies led to the monthly dog subscription service Barkbox appearing again and again in the ads as I scrolled. I was inspired, and this felt like the perfect opportunity to finally give the brand a try, and I was thrilled when Barkbox agreed to send me a Barkbox to try for myself. Keep reading to learn all about the experience, and why my dogs are loving everything from the brand. 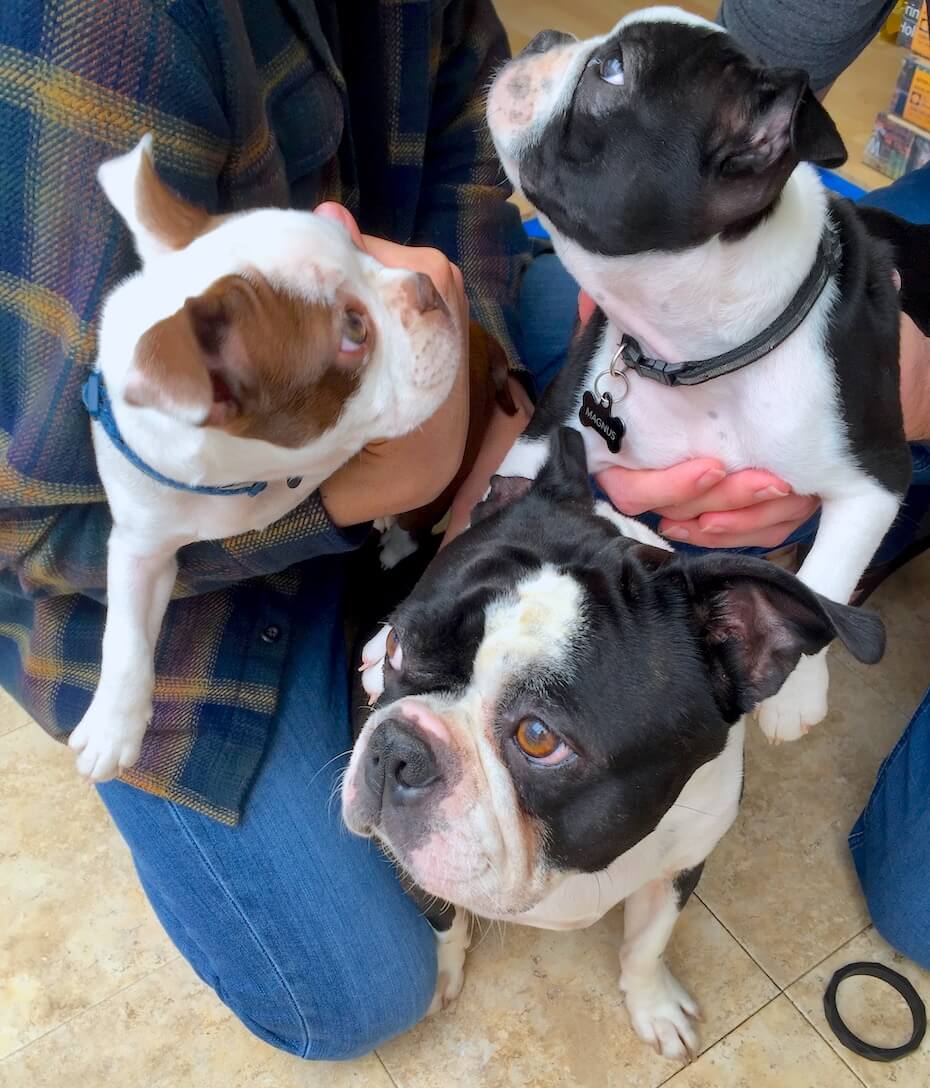 Chances are that you've probably heard of Barkbox because they are the go-to monthly subscription box for dogs—and because they're absolutely killing it on Instagram at the moment with their memes and other relatable dog content. They specialize in monthly subscription boxes, which are specially curated to cute and unique themes each month. That means your dog is introduced to new and innovative toys each time so that they never get sick of what shows up in the mail.

Each and every box features two uniquely themed toys, plus two bags of all-natural dog treats and a chew. If you don't want your dog eating beef, chicken or turkey, you can also make that known, and you won't be sent treats including those ingredients. That's because when you sign up, you don't get wind up getting the same old box as everyone else using the service. The brand asks for your dog's name, sex and birthday, plus their size and breed so they know what types of toys would be appropriate for your dog, and even then, there's some awesome variability in what you might receive. Barkbox also responds to feedback to tailor future boxes to ensure that your dog is the happiest it can be.

Each box is valued at more than $40, but you'll pay much less to have one delivered to your door every month (with free shipping every time). If you subscribe for a year, boxes go for $23 a month, while a six-month subscription is discounted to $26 and buying individual boxes costs $35. I requested a Barkbox for large dogs, to treat our 55 lb. ultra-sized Boston terrier, Horace, and received a delightful Barkfest in Bed box. 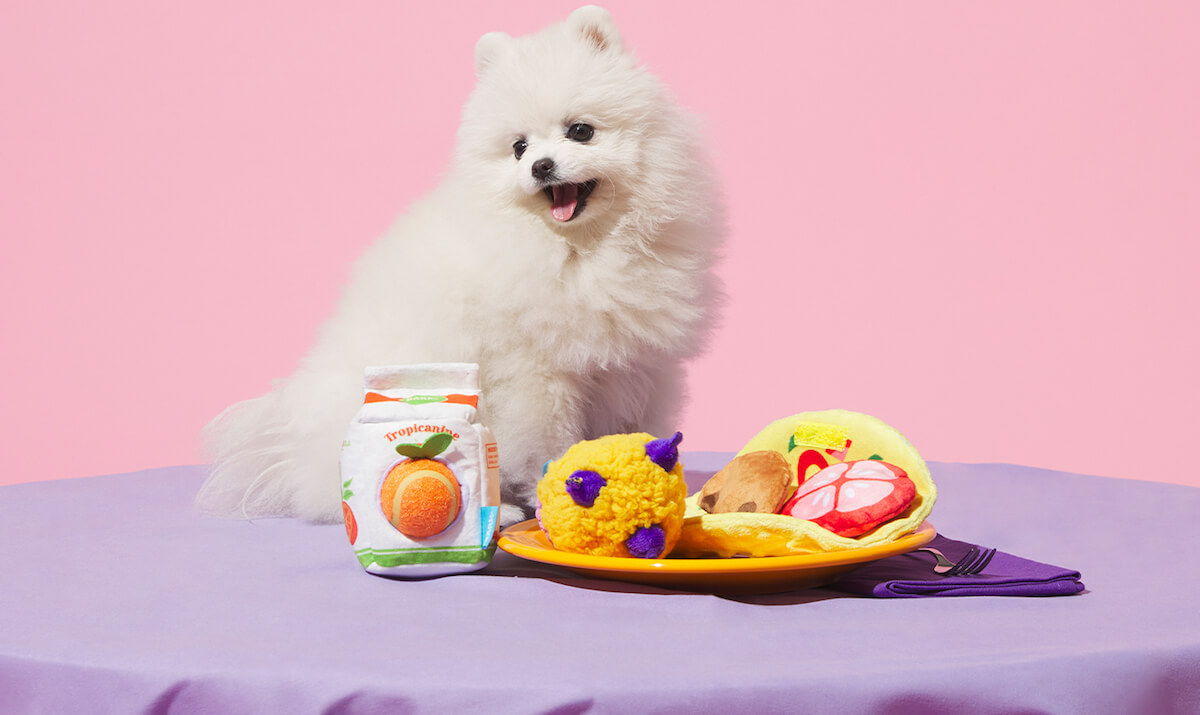 When I opened my "Barkfest in Bed"-themed Barkbox, I was immediately impressed with the presentation and packaging of everything inside. First of all, it came with a handy guide to Barkbox, including a list of all of the 10 possible plushes that could have been included inside. Those options included a small "Stuffin' Muffin," sausage "Lickin' Links," a carton of "Fresh Squeaked O.J." an eggy "Frenchie Omelette," a pink box of "Barker's Dozen Donuts," a stack of syrupy "Beggo Waffles" and big "Frosted Socks" cereal box. 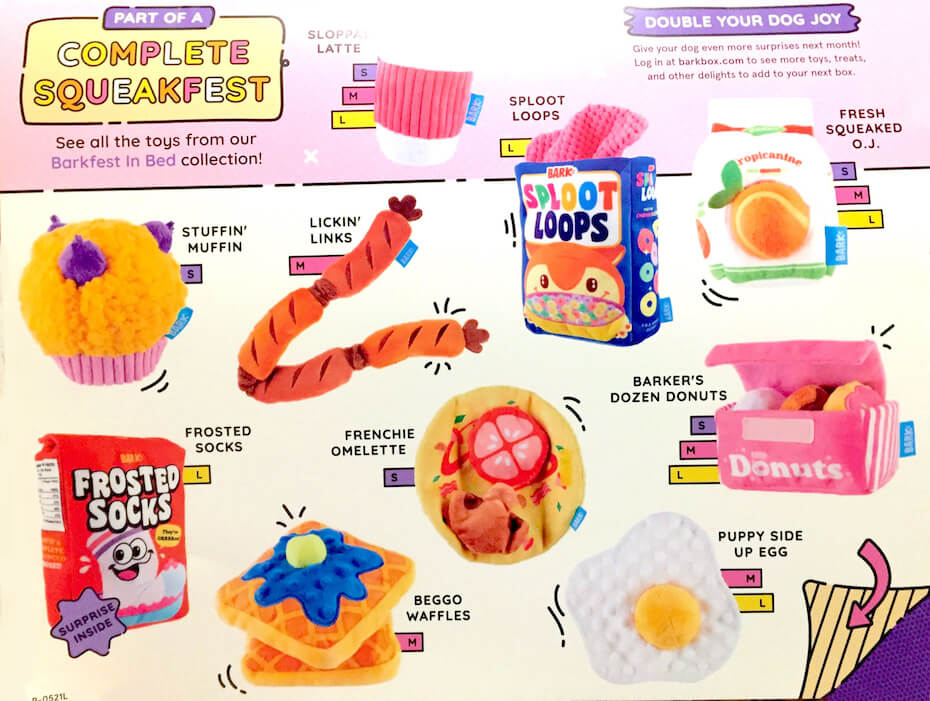 In addition to the three plushes my box included—"Puppy Side Up Eggs," a "Sloppay Latte" and "Sploot Loops"—it also contained two bags of meaty treats and a great big chew stick.

I started by taking all of the labels off of the toys and offering them up to Horace. He immediately went for the plushie coffee cup, the Sloppay Latte, and starting biting down on it, discovering the squeaker inside. Horace loves squeakers, so he quickly fell in love with the toy. However, even though he's a heavy chewer and loves tearing toys to shreds, he still hasn't destroyed this one. That's one quality chew toy! 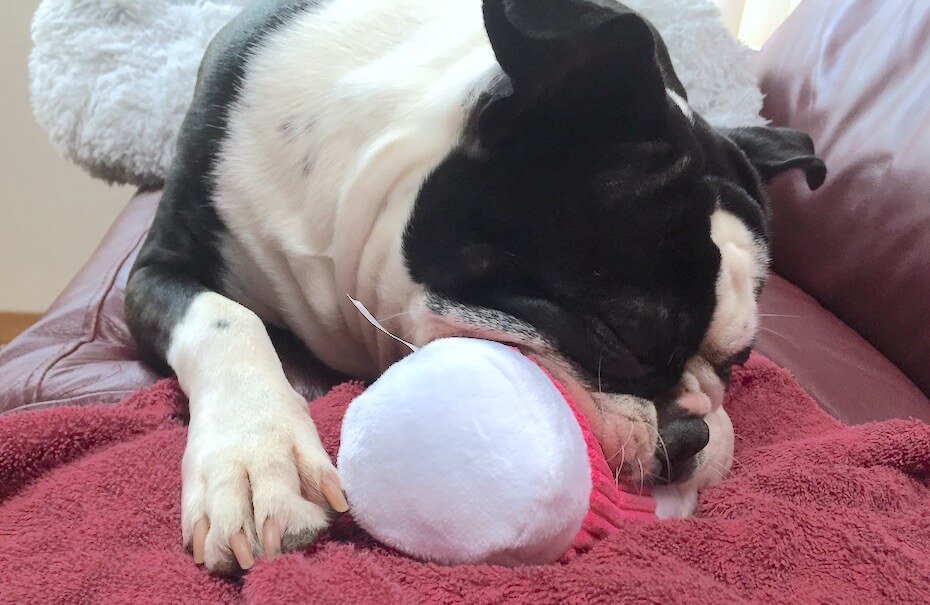 During a subsequent play session, I introduced him to the "Sploot Loops" cereal box, which has a layer of pink "cereal" spilling out of it, and he was definitely drawn to the crinkly sound it made when he played with it. It was a little tougher for him to discover that this one also had a squeaker inside, which made it another fast favorite. 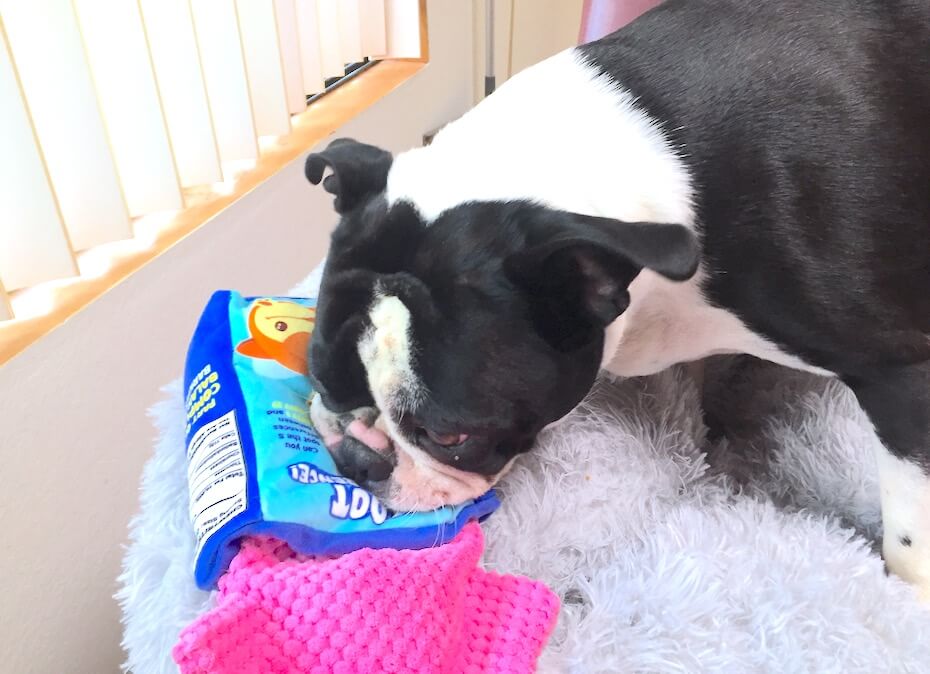 For whatever reason, he mostly avoided the "Puppy Side Up" eggs plush—that is, until I allowed the smaller twin pups, Hilda and Magnus, to play with it. It immediately resulted in a game of tug-of-war, with the puppies running all over the yard attached by the toy at the mouth, and eventually inspiring Horace to want to get in on the action, too. They're still too small to activate the squeaker, but Horace can, which made them even more interested. 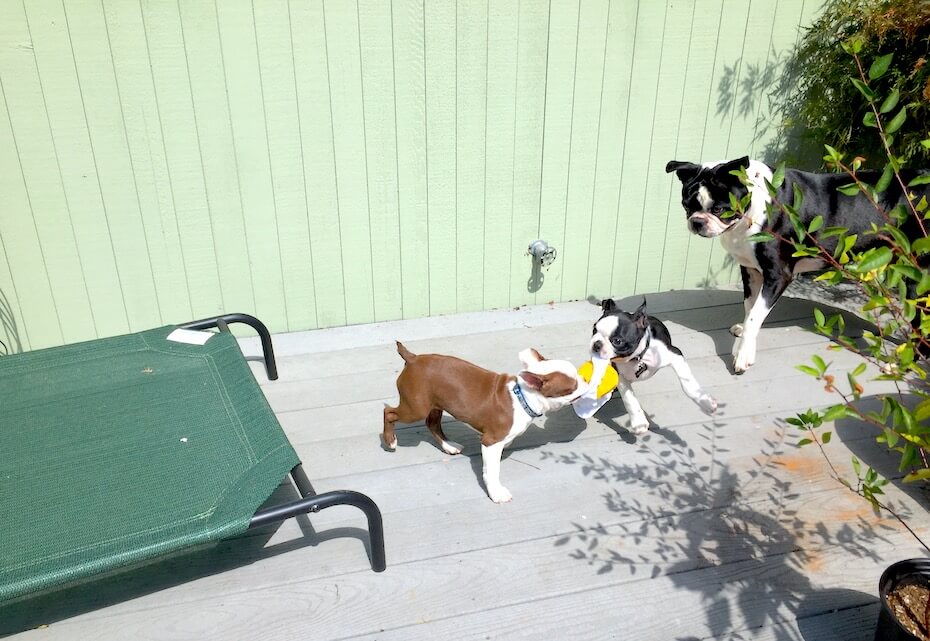 As for the treats, we let Horace go to town on the big chew (he's good at demolishing those types of things quickly), but we decided to use the beef and lamb treats for training. The beef came in long sticks, while the lamb was in thicker, jerky-like pieces, but both were easy to tear into appropriately sized pieces to give each pup for adequately sitting, coming over and shaking paws. Horace sets an awesome example for the little pups, and they were following along with the commands in no time with the promise of Barkbox treats on the horizon.

In my opinion, Barkbox can be as much of a fun surprise for pet owners as it is for the dogs themselves when the box shows up every month. These toys are definitely high-quality, and my dogs can't get enough of them or the treats inside. It's almost a shame that the cute theming of the boxes is lost on the dogs themselves. Though you could probably go to a pet store and buy a couple of toys and treats for less than you can get a Barkbox, that's not nearly as exciting—and I don't think the toys will be half as special. There's a reason more than 2 million dogs have given Barkbox a try and if you're curious, I think it's definitely worth trying a box for yourself (and your dog).

If you missed International Dog Day, click HERE to check out our favorite current dog accessories and toys.