If you follow my writing at all here at Sweety High, you probably know that I love video games.

I've been playing them since I could hold a controller, and my childhood was filled with retro systems and visits to local arcades. That's why I was so excited when the team at Ren Beanie PR gave my team a couple of amazing mini arcade cabinets from Basic Fun to play with and review.

A couple of new games, Tetris and Ms. Pac-Man, were just added to the lineup—and I was given both to try for myself. 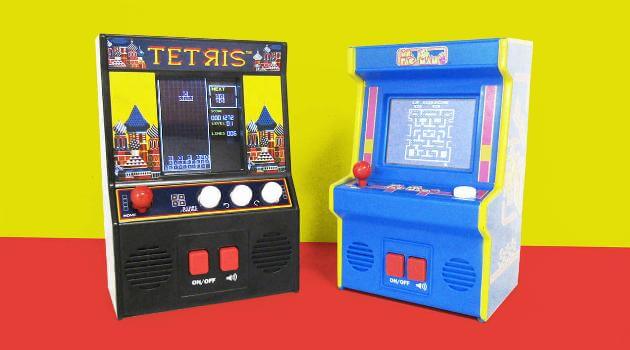 Right off the bat, this mini Tetris cabinet is visually striking. While I haven't personally seen any Tetris machines with this Russian spire aesthetic, it really works for the game and feels true to its spirit. It would look awesome on your desk or your shelf if you're a collector who loves the game.

When I turned it on and started up a game, it immediately started playing an 8-bit version of the classic Tetris theme song, "Korobeiniki," taking me back to the days of playing it on the NES and Game Boy. As the bricks started falling, I immediately fell back into the rhythm of playing the game (though I turned off the music and sound effects so I wouldn't bother the people around me).

Playing it reminded me how fun Tetris is and how easy it is for me to get sucked into it. But while the controls worked, they weren't totally optimized. It takes a while to get used to the control stick, and even once you do, the movements are a little finicky. In the early stages, this wasn't an issue as I had lots of time to correct my mistakes, but as the levels rose and the game sped up, I made more and more mistakes due to the lack of control.

It also seems easier to earn points in this game than in the other Tetris titles I'm used to, and I was a little sad to discover that 100,000 points doesn't trigger a rocket ship scene—though I'm not sure that was ever in the arcade versions. Overall the experience was a ton of fun, but not quite perfect. 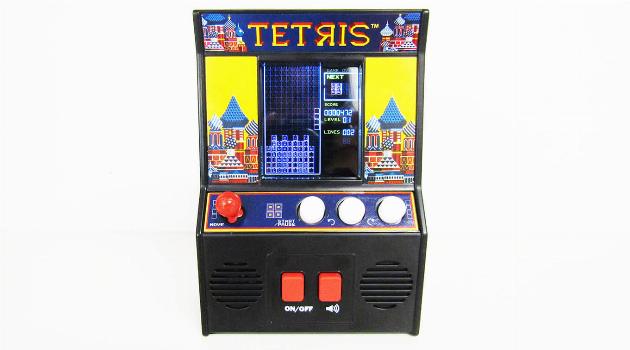 Again, it's hard to fault the visual design of this tiny Ms. Pac-Man cabinet. This time around, it closely follows the design of the real thing, and lovers of the game are going to flip out when they see it. The primary colors are as striking as they are inviting.

This machine also plays all of the familiar sounds of Ms. Pac-Man, from the catchy theme to the sound of the title character eating dots and chomping on ghosts. The sound does add to the experience—though it would be awesome to be able to turn the volume down rather than all the way off. It's quite loud, and if someone else were playing it near me, I think I'd find it super distracting.

And while Ms. Pac-Man is a total classic, it's never been one I've been able to play for that long. While Ms. Pac-Man is less repetitive than the original Pac-Man because it has four times as many level layouts (plus cutscenes of the two characters falling in love, pursuing one another and having a baby), it's tough, and the ghosts stress me out.

Like the Tetris machine, the controls also aren't as responsive as I'd like. Even after I'd gotten used to the controls, I still felt like it was occasionally eating my inputs. The game is tricky enough when I'm actually in control, and I've been munched by ghosts again and again because I missed a turn.

It's still awesome to play—and makes an awesome little decoration—though dedicated players might get frustrated by not being to play it as well as they're used to. 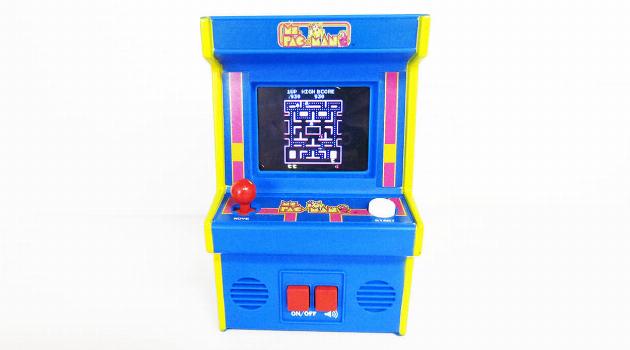 Basic Fun's Arcade Classics start at about $16 on Amazon and in Walmart stores, and for mega fans, that would probably be worth it even if they weren't actually working video games. They look stunning, and the fact you can play them is the icing on the cake.

If you love the games, you'll probably love the machines, too. The controls aren't super precise, which makes beating your personal high score tricky, but it does get better with time. It's not the definitive way to play the games, but you'll still get a kick out of them.

If you're an arcade fanatic, too, click HERE to see our favorite Street Fighter characters as adorable plush toys.