Bea Miller is a musical artist with Hollywood Records who dropped her debut EP earlier this year. 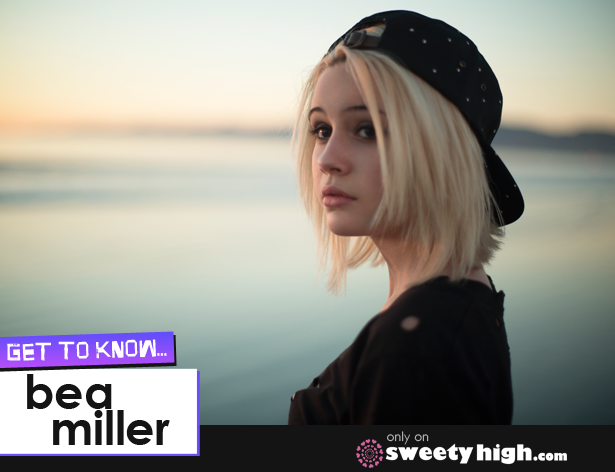 In a recent chat, Bea told us all about her musical past as well as future, including gearing up to play shows with a massive act, details of which she couldn't divulge just yet, and playing the KIIS FM's Picnic In The Park, the pre-party for One Direction's Southern California Rose Bowl dates Sept. 11, 12 & 13.

Young Blood consists of four tracks: "Young Blood," "Enemy Fire," "Fire N Gold" and "Dracula." Though each track has a unique sound, they each convey Bea's central message: struggling teens need to know that they're not as alone as they might feel.

"With Young Blood I didn't want the EP to have a bunch of love songs because not everyone can relate to them. I think the theme of my EP is to be confident and to know you're not alone," Bea explained. "I know that a lot of teenagers my age feel like no one understands them, and when they're upset they're the only person who's ever felt that way. I want kids to know even though you feel like you're all by yourself, everyone has these experiences and everyone does feel like crap sometimes, but you get through it."

"The video was a lot of fun to film because I actually had a couple of my personal friends in the video," she said. "All the other kids were actually hired based on their personal life stories, and their fears and their hopes and dreams."

Instead of reading scripts, the actors came in for mini interviews and told their own moving stories. "We had them talk about themselves, their fears for the world and the future and things like that," Bea said. "It was really cool to interact with those kids and make friends with them on the shoot."

For Bea, the EP is just a taste of what's to come. She's been working on her full-length debut album slated to come out in early 2015.

"The album is really a piece of me," she said. "It's so important to me and I feel like it really describes me as a person. What I like about it the most is that all of the songs sound completely different musically."

While each of the tracks sounds quite different, she points out thematic elements will unite the album making it one cohesive unit.

But Bea Miller isn't only known for her musical career. She's also an actress who has appeared on both the big and small screen. Her credits include Confessions of a Shopaholic and voice work on Toy Story 3.

While she had put her acting career on hold while she focused on her music it's not the end of Bea's time as an actress.

True to her word, later this year, Bea will return to her acting past and with an upcoming role in an indie film! "I really liked the script and the concept of the movie. It's a thriller. It's really sick and really awesome and I'm excited to do it."

To stay updated on all of the latest from Bea Miller, be sure to follow her on her social pages, listed below! Bea fans can also join our community at SweetyHigh.com to meet other fans and much, much more!