If you frequently find yourself overwhelmed by the little stresses of everyday life, it can be a smart idea to have an app that helps you deal with those feelings.

Beasts of Burden hopes to be just that app. It's a game that's been developed to help players cope with pressure and stress, and it's currently in the crowdfunding stages on Kickstarter.

The campaign runs until Dec. 14, but the makers of the game allowed me to download a demo of ahead of time so I could test it out and share my thoughts.

Beasts of Burden is an app built to help you cope with the stressors of life by giving them a physical form to tame. Based on three decades of research by Dr. Derek Roger, the idea is that by externalizing your stress, you can start seeing it from a totally different perspective.

The Beast of Burden—or Bob for short—is a creature symbolizing whatever's getting you down. It's draining your energy, but there are small stress-busting tasks you can complete to make it less beastly, simultaneously stopping the cycle in its tracks. 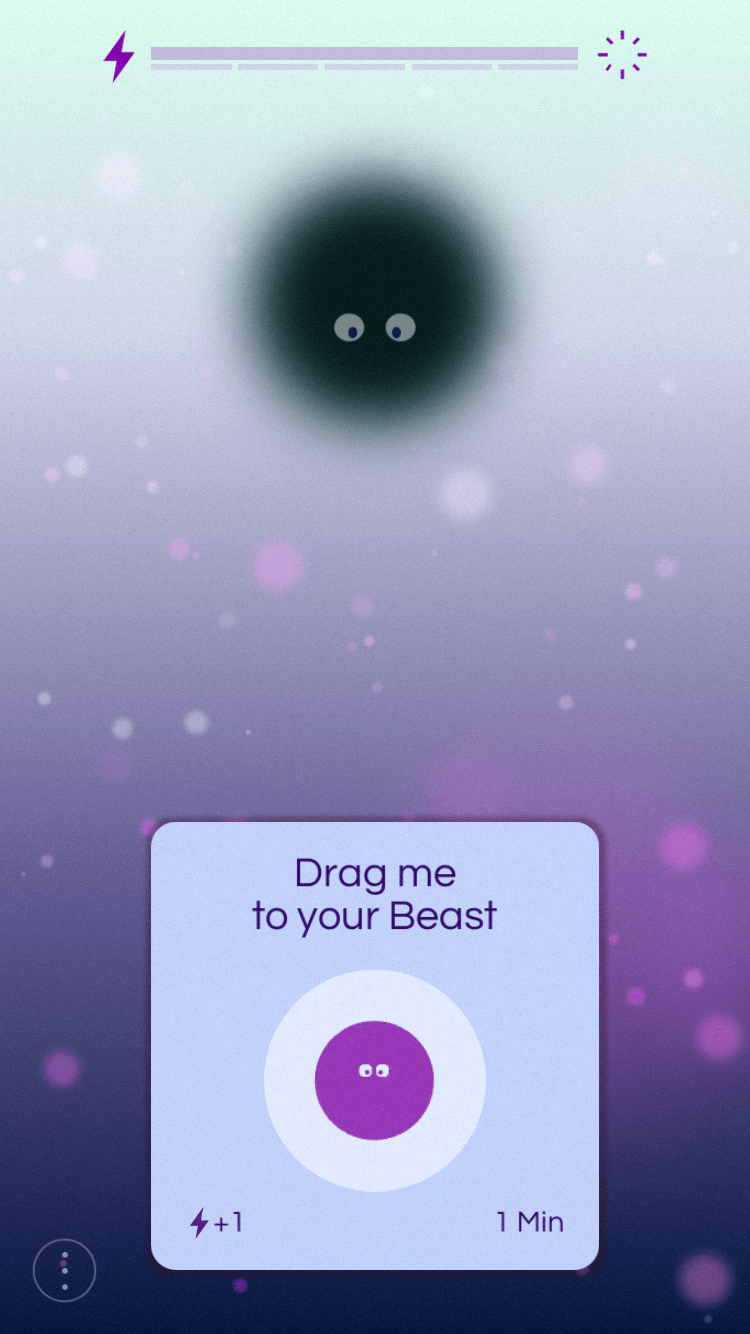 Not only does the experience help calm you, but you'll also build up a better resilience to stress. It helps you understand both the external and internal forces that are stressing you out while creating habits that'll allow you to understand and handle your stress, making you happier in the long run as you learn to release those feelings.

So far, three different beasts are represented in the app, each corresponding with a different type of behavior. There's an avoidance beast, a control beast and a pleasing beast—and depending on how you interact with it, the game figures out which one you personally need to tame. In its final version, Bob will also morph physically as your type of beast becomes clear.

As Bob changes, the app will adjust as well. It's meant to learn from your choices, tailoring your activities to what you need and what will suit your destressing needs best.

As I booted up the app, I was greeted by my "inner voice," who introduced me to my very own Bob. Though it was cute—starting off life as a round, slightly formless ball of fuzz with little eyeballs—I was told that it was trying to drain my energy. 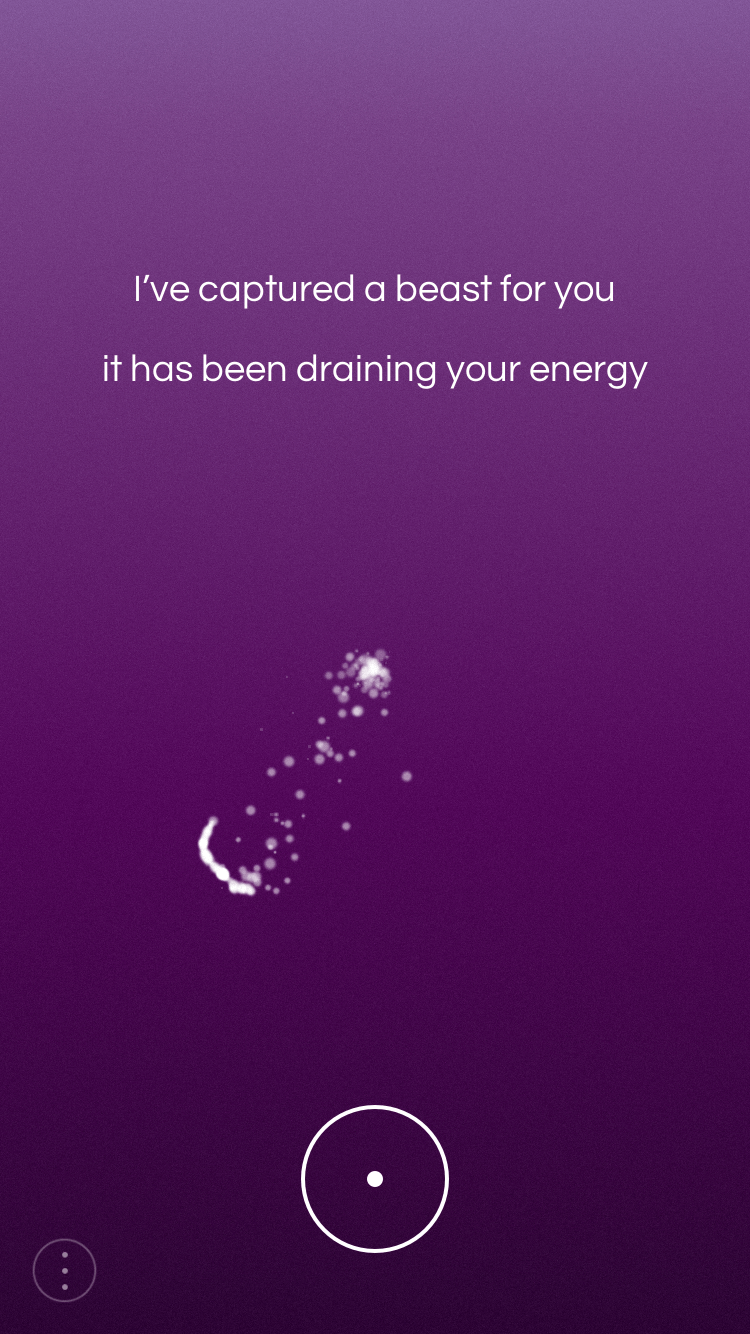 To counteract it, I dragged a card at the bottom of the screen to my Bob, which soothed it. This is the main action within Beasts of Burden. At any moment, there are multiple cards at the bottom of the screen, and they're each labeled with a title, a level of energy-boosting power and a time limit. By flipping each card, I could find out which areas of my mental health it might be able to strengthen, as well as the negative behaviors it might help tame.

But only when I dragged the card to the Beast could I really see what was in store for me. Each time, it gave me a short amount of time to accomplish a small task that could help me deal with stress.

After each task, it asked me how the activity made me feel, utilizing a sliding scale from "nearly died" on one side to "energy boost" on the other. I'm guessing that this, in addition to the types of tasks I select, is what might guide the future game's A.I. to tailor the experience specifically for me—though I'm not sure to what extent that functionality is available in the demo I've played. 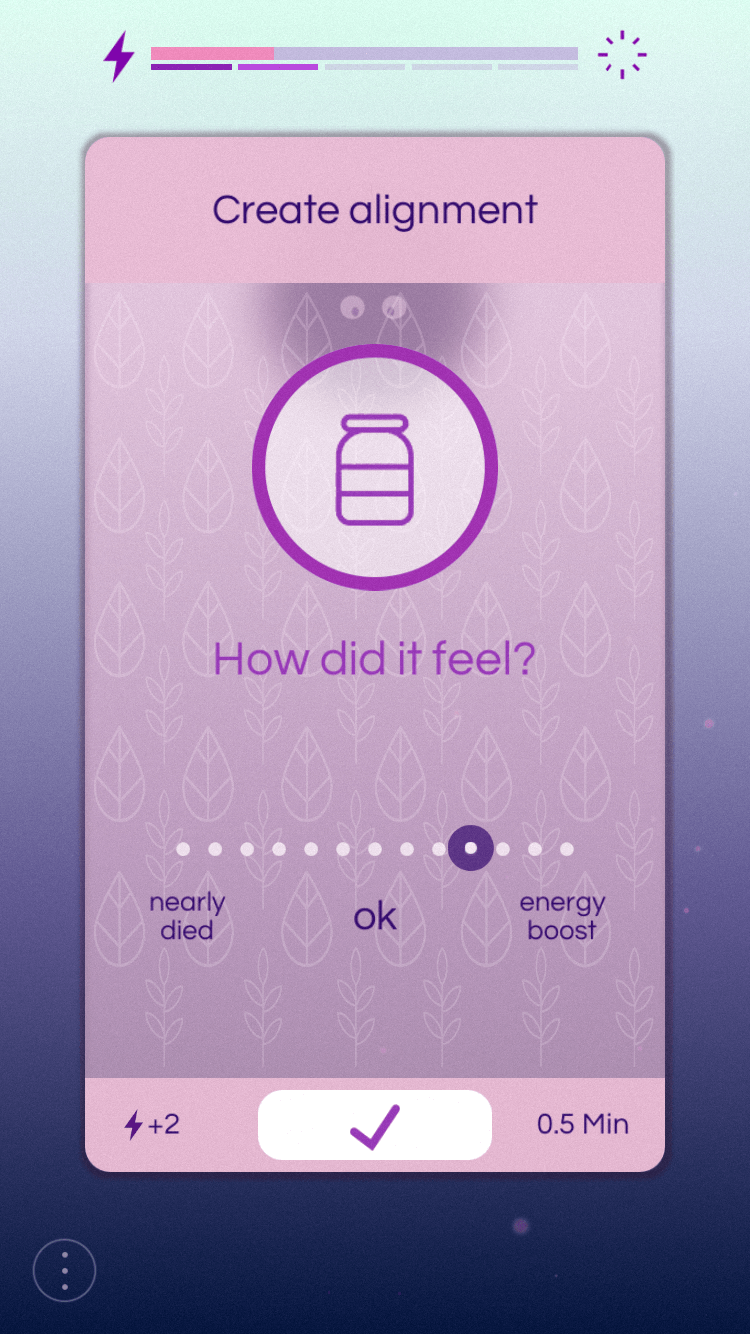 I could also skip cards if I didn't want to do them, bringing in other cards to replace them, though when I did so, I'd have to wait for time to pass before its replacement would unlock.

Sometimes, the smallest thing could feel like it was affecting a big change. For example, spending a minute tidying up around me often made all the difference to my mood.  I also loved spending half a minute slowly tracing a shape with my finger, or doing a simple breathing exercise or closing my eyes and imagining the sound of falling rain, in order to ground myself.

While some tasks are easy, others took more effort—but they're worth it. Sometimes they'd involved chatting about my stress with someone else, or making lists that could help me put my feelings into words and handle them differently. Another asked me to write down three difficult decisions I had ahead of me. It was hard to even come up with those three things, but once I did and I imagined the best possible outcomes for them, I found my mind in a much better place. Even when they felt like worth, I was happy I'd done them. 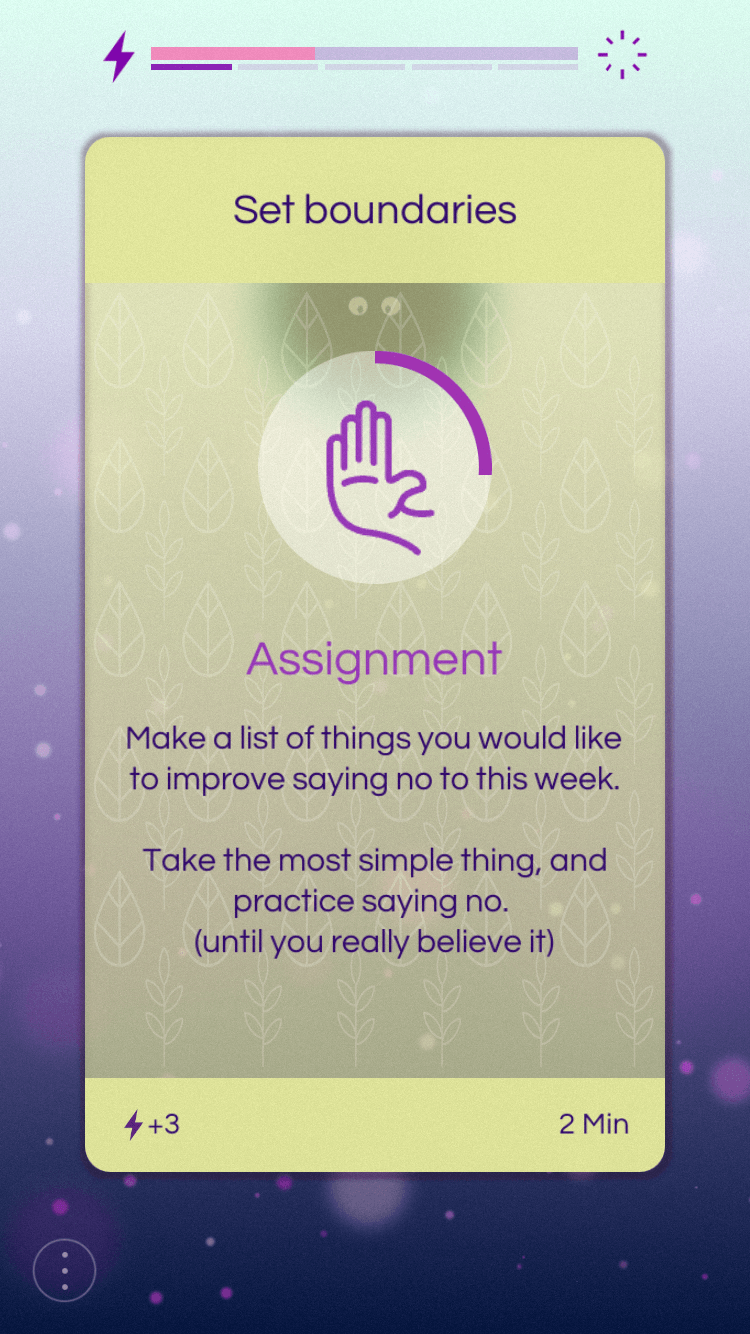 Some of the cards are extremely open to interpretation, but I like the flexibility that it lends them. One titled "A different dish" simply asked me to cook a different meal that night. It gave me five minutes to ponder this over. Perhaps it meant that I should switch up my current dinner plans and me more open to change, or maybe it meant that I should just attempt something I'd never made before. I already set my cooking plans for that night, but it was for a brand new recipe, so I think I managed to accomplish it. The description was just vague enough for it to mean whatever I needed it to mean.

However, I do think it could be great if the new cards could give more context around what they'll entail. Some require you to lean on others for help, or ask you to do things that you might want to do in private because you might get embarrassed doing them around others. I definitely wouldn't want to breathe fog onto a pane of glass when I was going about my day. Others required me to be at home, so I could make my bed more neatly, for example. 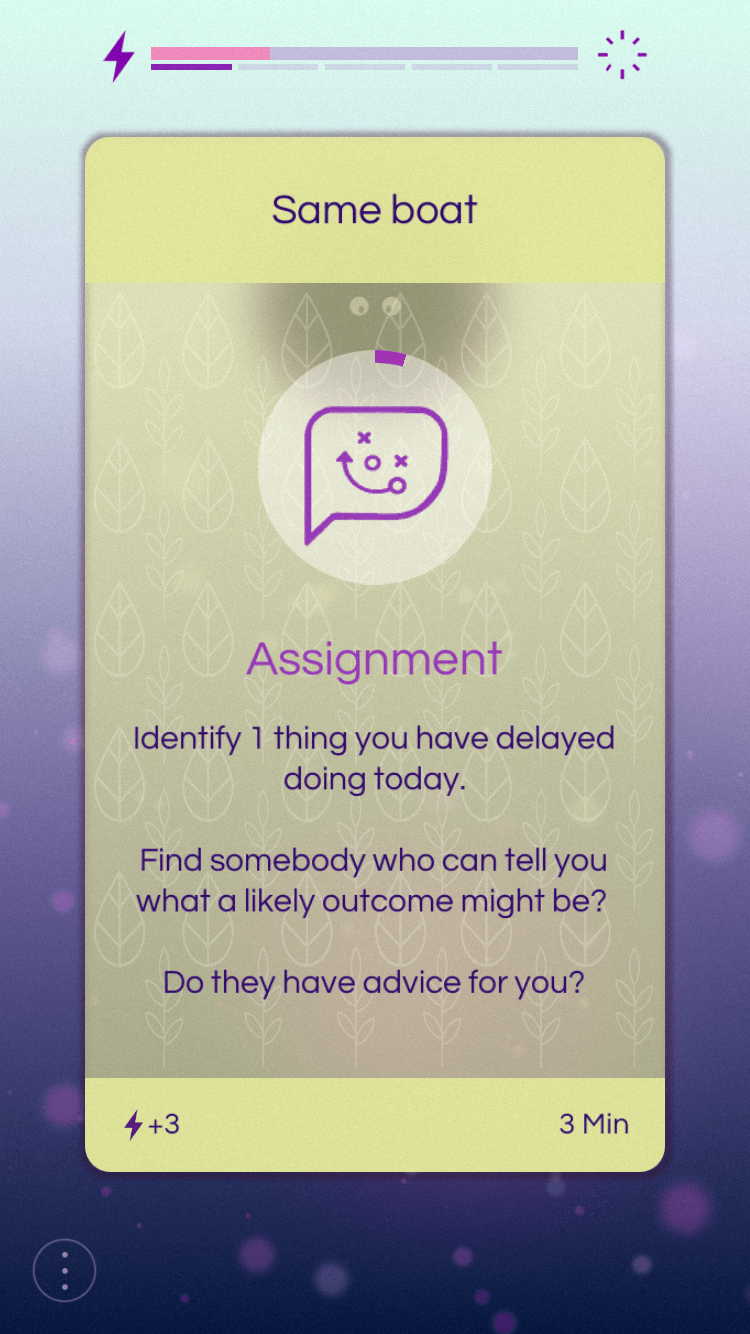 Still, this was an app I would turn to again and again, yet only when I needed it. It wasn't the kind I'd obsessively log into to rack up rewards or prevent loss of my progress. It was there for me when it would be useful, but didn't call to me when it wasn't.

And the fact that it asked me to do simple, real-life tasks meant that even when I didn't have the app on me, I could think back to my favorite de-stressing methods from the app and use them wherever I was. Now, a quick mental break can be just moments away for me. 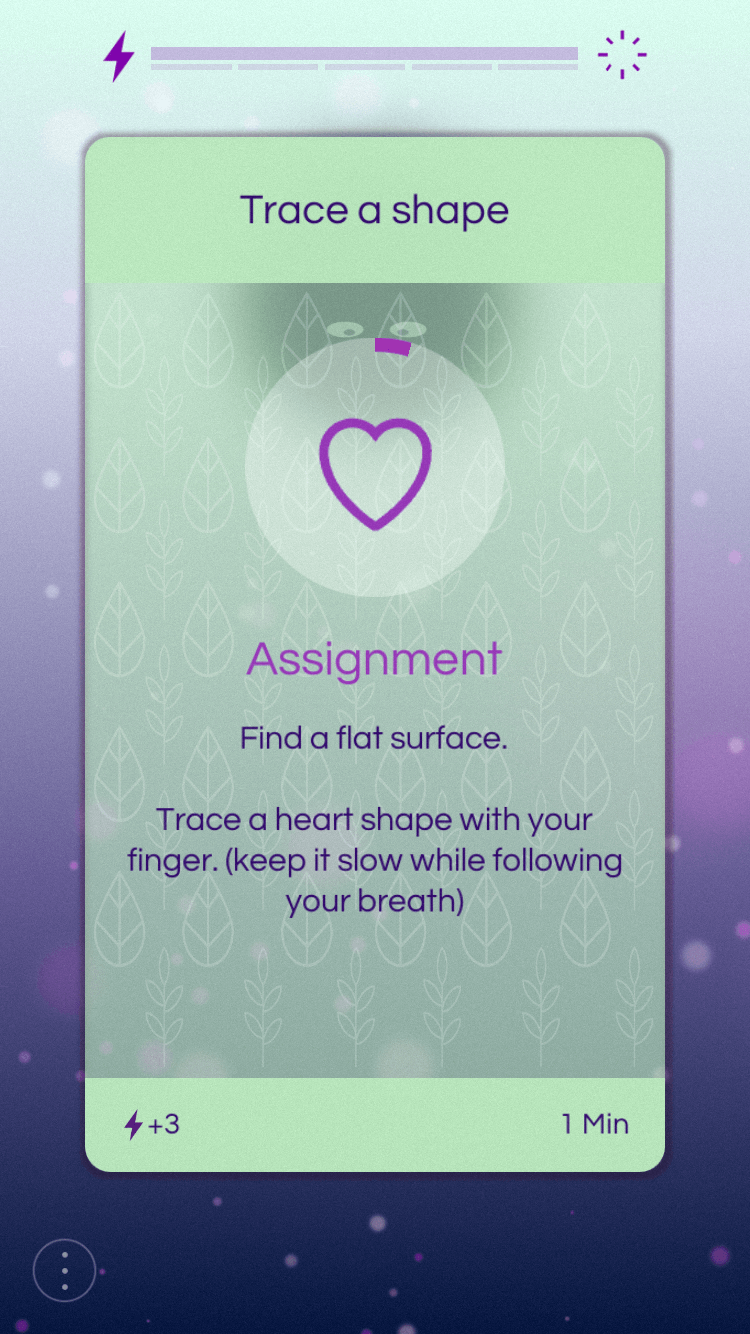 However, in its current form, it's not without its flaws. Occasionally, I'd turn to the app when I wanted to use it, but all of my current activities would be time-locked, and I'd have to come back later to try them. I imagine this is a quirk of the beta, and won't really be an issue with the final product unless you blaze through all of your tasks too quickly. In these situations, I often found I knew the activities that accompanied the locked cards and was able to practice them, even if the app wouldn't currently allow me to select the card. The best thing about the app is that it teaches you to utilize these tools even without it.

Overall, I've found Beasts of Burden to be a really effective tool for de-stressing, and much less of a commitment than other similar apps that help to deal with feeling overwhelmed. None of the assignments I've seen so far take any longer than five minutes to complete.

According to its Kickstarter page, the app is about 90% finished, and the funds currently being raised will focus on developing the game's A.I. system that will smartly cater to the user. It's hard to say what the final product will look like, but I think that so far, it gets the job done and was really good at helping me calm down when my heart and thoughts were racing. So far it's gotten me through a slightly stressful Thanksgiving and an annoying fire alarm situation.

If successful, Beasts of Burden is slated to hit the app store in January, and looks like it will be a paid one. You can click HERE to check it out on Kickstarter.

If you need more soothing apps on your phone, click HERE to find out more about the #SelfCare app.