We Got Our Hands on All of Funko's Too-Cute Beauty and the Beast Figures: See Them HERE

Disney's live-action remake of the classic animated film Beauty and the Beast finally hits theaters this Friday, and we're not at all surprised that our friends at Funko were totally inspired by the movie.

They recently pushed out a TON of adorable figures in support of the film and—don't get too jealous—sent them to us so we could snap some photos and share every one of them with you. They're so cute it's hard to resist picking up at least one.

By the way, if you're obsessed with Funko's Disney toys, you'll definitely want to click HERE to find out about their Disney Treasures subscription box.

This look suits Belle to a T, but we particularly like it on the typically grumpy Beast. It's not often that the Beast looks like such a sweetheart. 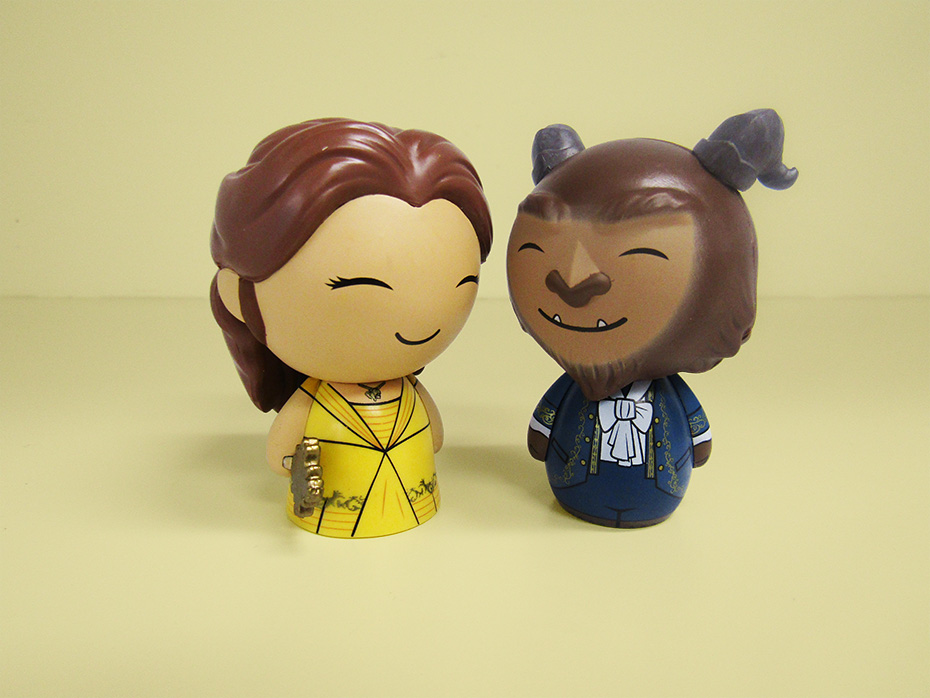 And if you're less a fan of Belle's glam yellow look and more into the blue dress she wears in town, there's a Dorbz figure for that, too—and it comes complete with a book in her hand. 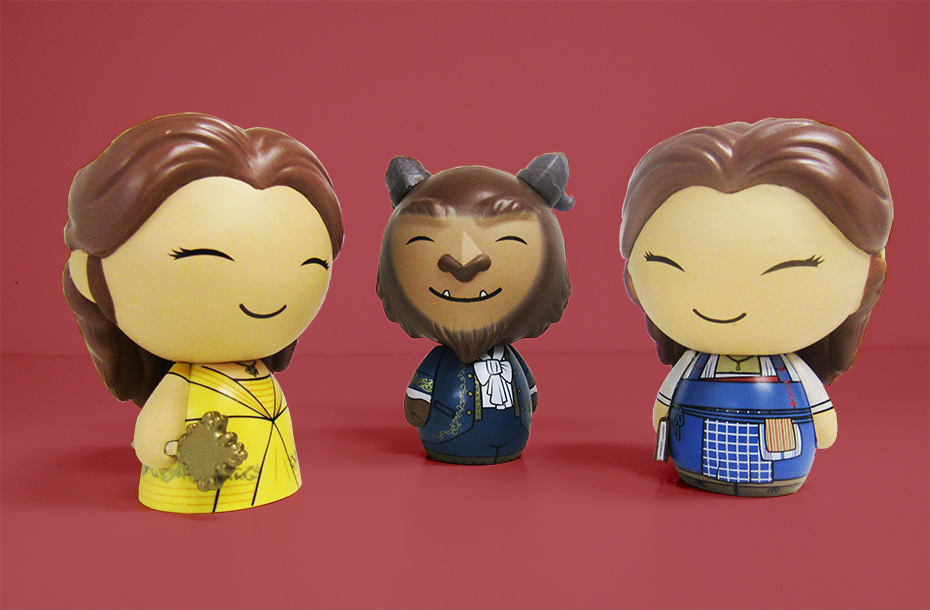 Pop! is probably Funko's most recognizable line of toys—it's almost impossible to visit a toy, comic or book store without spotting at least a few. They're highly detailed and the ultimate collectible for fans—and we love seeing our fave Beauty and the Beast characters in Pop! form.

First off, the collection just wouldn't be complete without the Beast's loyal employees-turned-household-objects. Lumière, Mrs. Potts (and Chip!) and Cogsworth are all here and they look incredible. 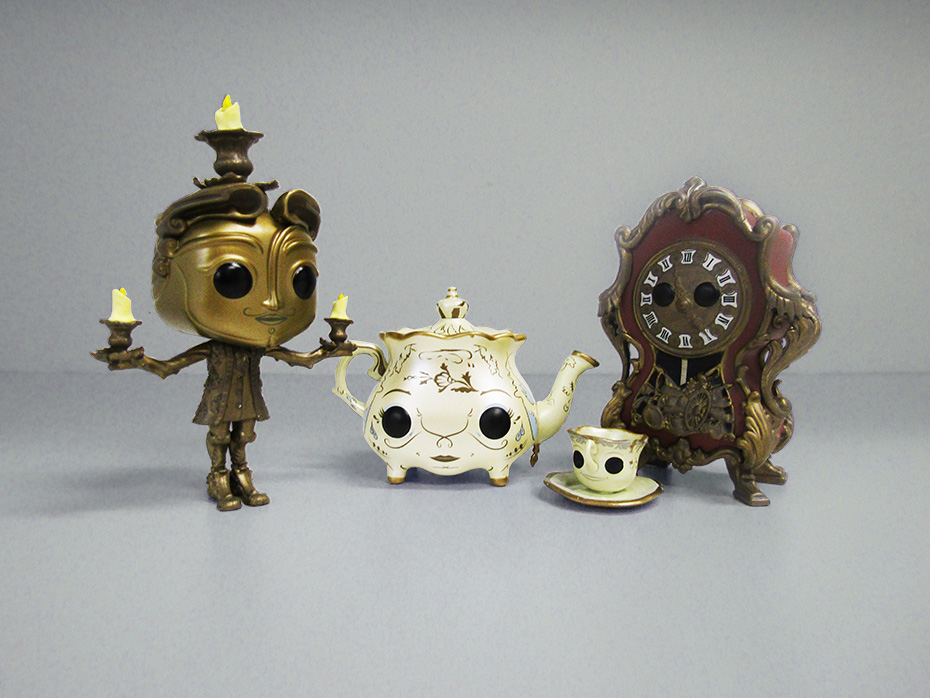 Obviously Belle and the Beast are represented as well. Despite the simple features, we think the Belle figure totally looks like Emma Watson and Beast's look is just the right blend of ferocious and cuddly. 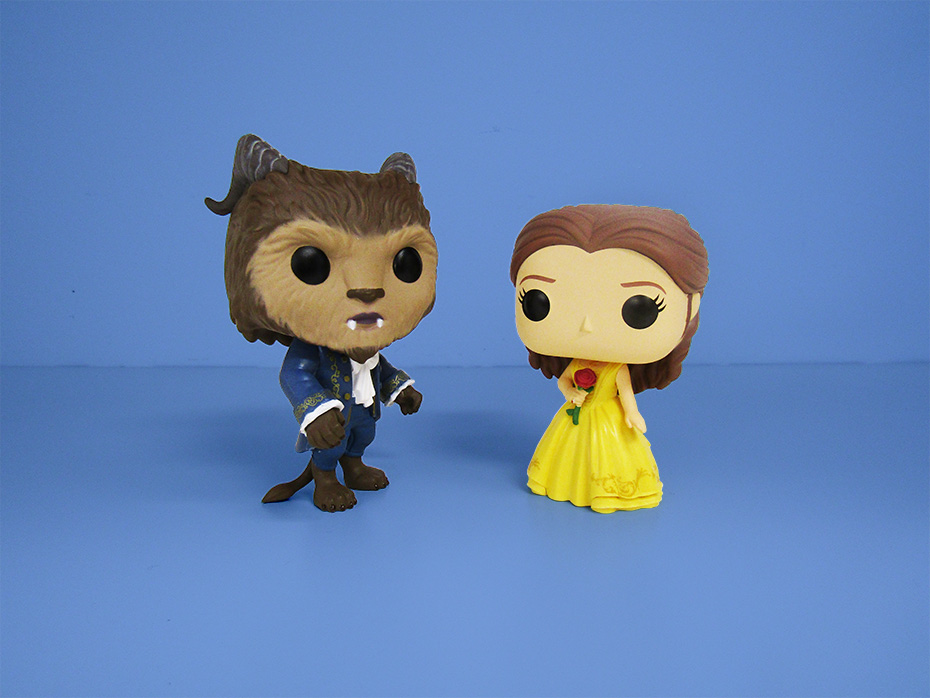 But we really  love this figure of Belle in her celebration dress, which doesn't really have a parallel in the original cartoon. We've only gotten the chance to see it in a single promotional photo, but it looks gorgeous—and we also had to show you floral details at the back of Belle's hair 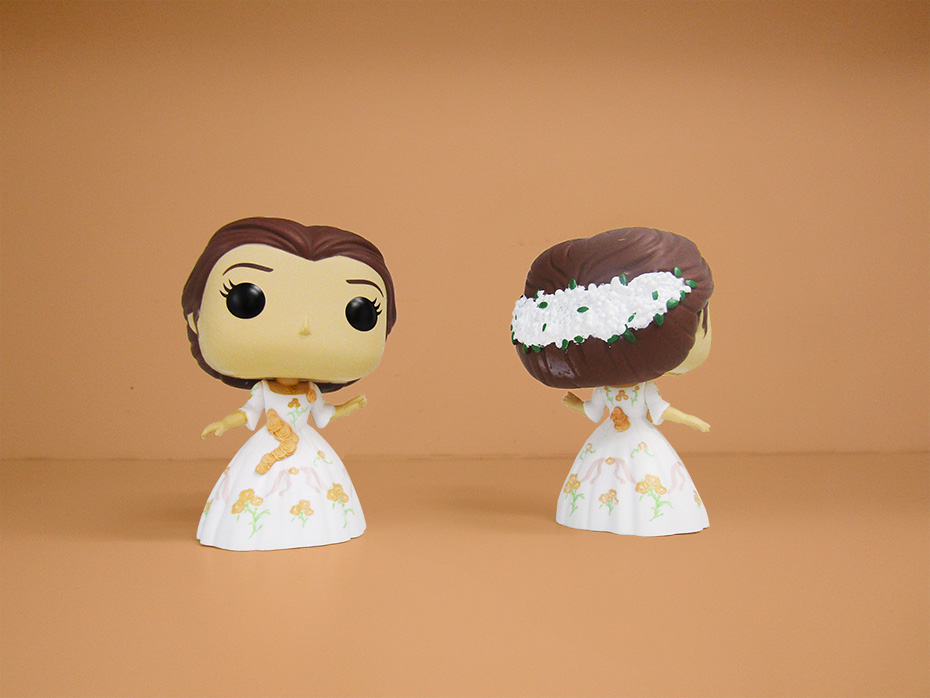 Last but definitely not least are Funko's Mystery Minis, which are blind box figures. They're smaller than the Dorbz or Pop! toys and there are 12 in all, but they come in mystery packaging so you never know which one you're going to get. Getting doubles makes for an opportunity to trade for the one you're missing!

There are four different versions of Belle in the Beauty and the Beast set of Mystery Minis, and they're all worth nabbing. Of course the celebration dress is beautiful, but there's also her formal yellow dress (with and without a red rose) and her original blue dress. 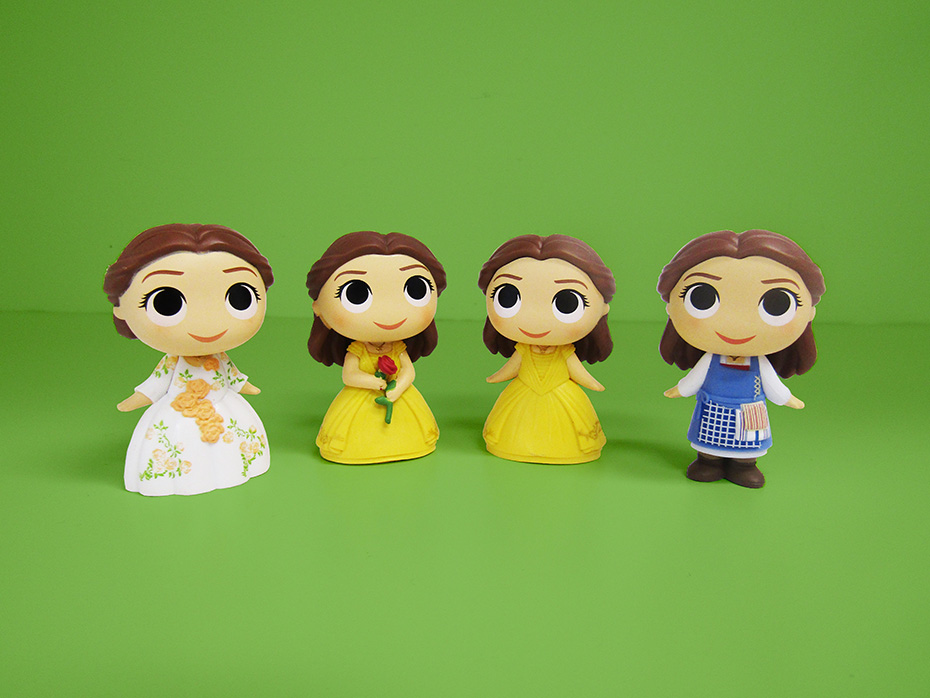 Then there's the Beast. In addition to his two Beast forms (one standing and one bowing quite cutely) he also shows up in his human, complete with a royal hairdo. 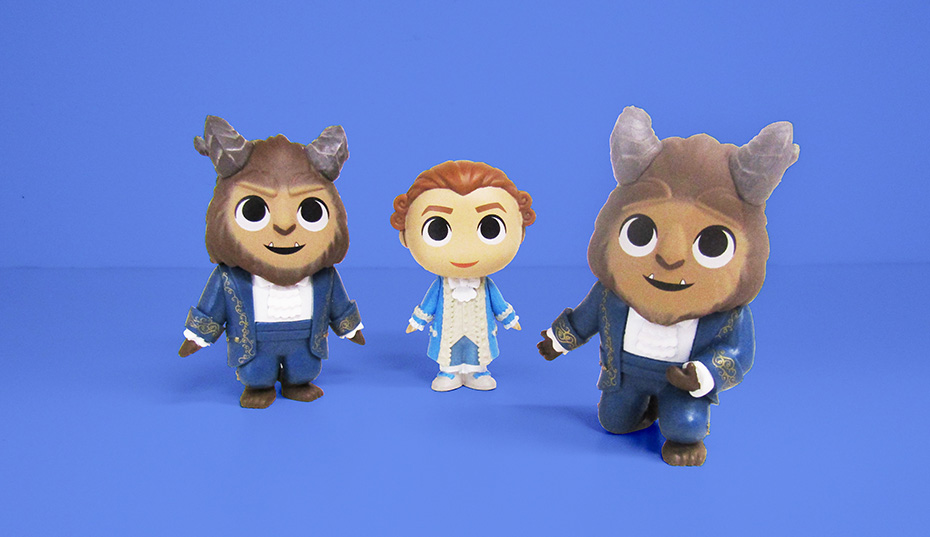 If you adore Lumière, Mrs. Potts and Chip, they're also available as Mystery Minis. We love that the sweet aesthetic is different from the Pop! versions of the same characters. 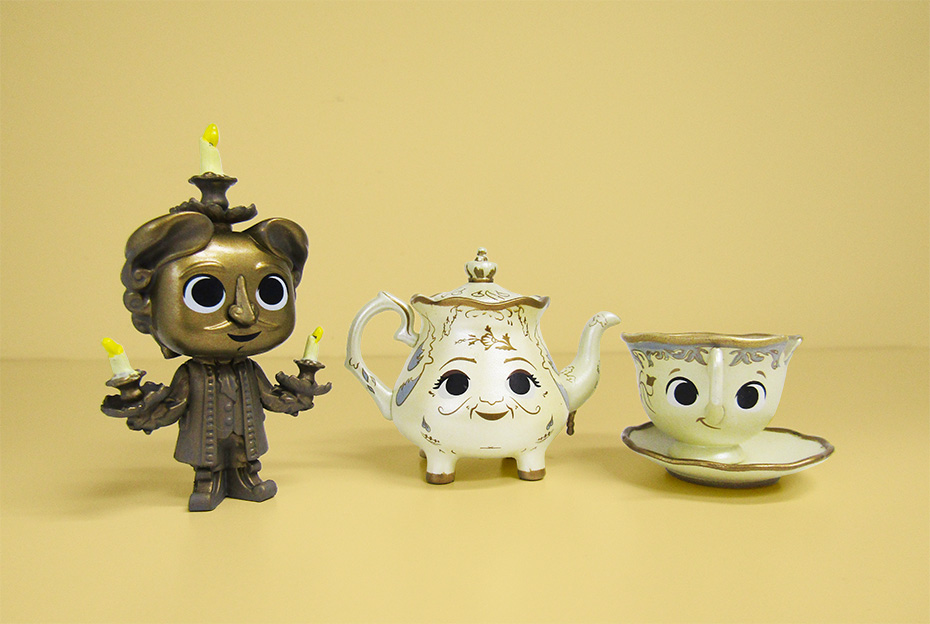 And we definitely appreciate that LeFou and Gaston are also getting some Funko love! Based on what we've viewed from the movie so far, it seems like we'll be seeing an all new interpretation of these characters, and they're adorable to boot. 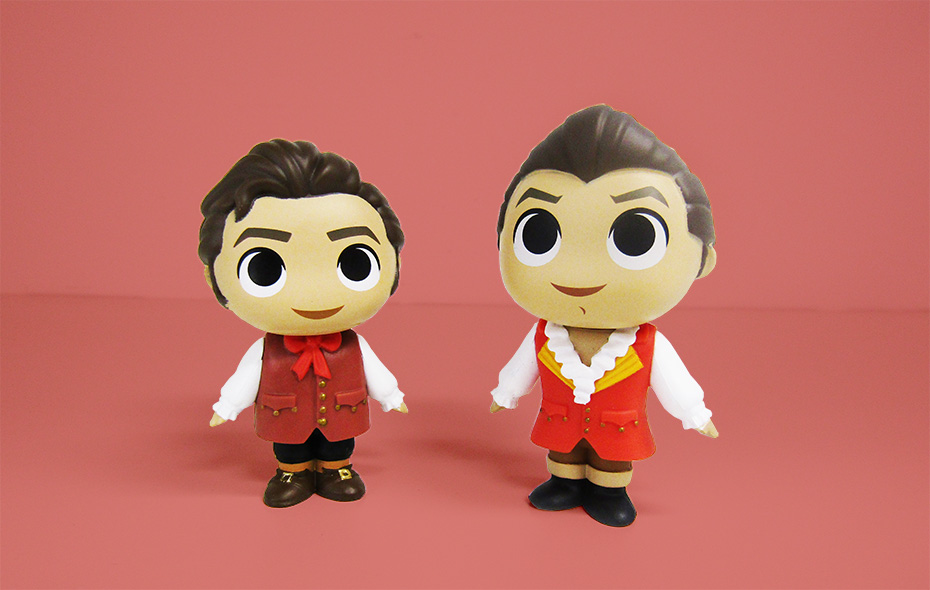 The entire collection of Beauty and the Beast Mystery Minis in one place is a sight to behold! 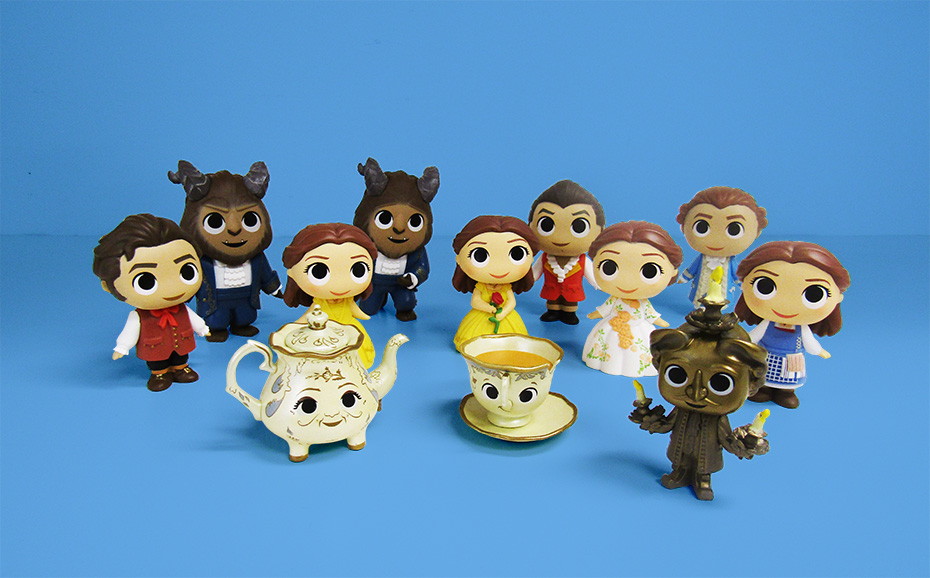 Want a box of mystery Disney goodies from Funko shipped to your doorstep every other month? Find out all about Disney Treasures here.

Belle also comes in plushie form! Click HERE to see all of the cute Disney Princess (and Star Wars) plushies from Funko.