20 Questions With The Brothers Of Before You Exit!

It's no secret that we are major fans of the musical trio Before You Exit!

Since the brothers are currently on fire ??? with the release of their new EP, All the Lights, and talk of an upcoming tour, we were thrilled that Toby, Riley and Connor McDonough were able to stop by last week to chat with us.

The band dished about everything from their new EP, to their fave Snapchat filter, to the craziest thing a fan has ever done to get their attention. Trust us when we say this might just be one of the most entertaining 20 question interviews in existence! Find out for yourself by scrolling below! 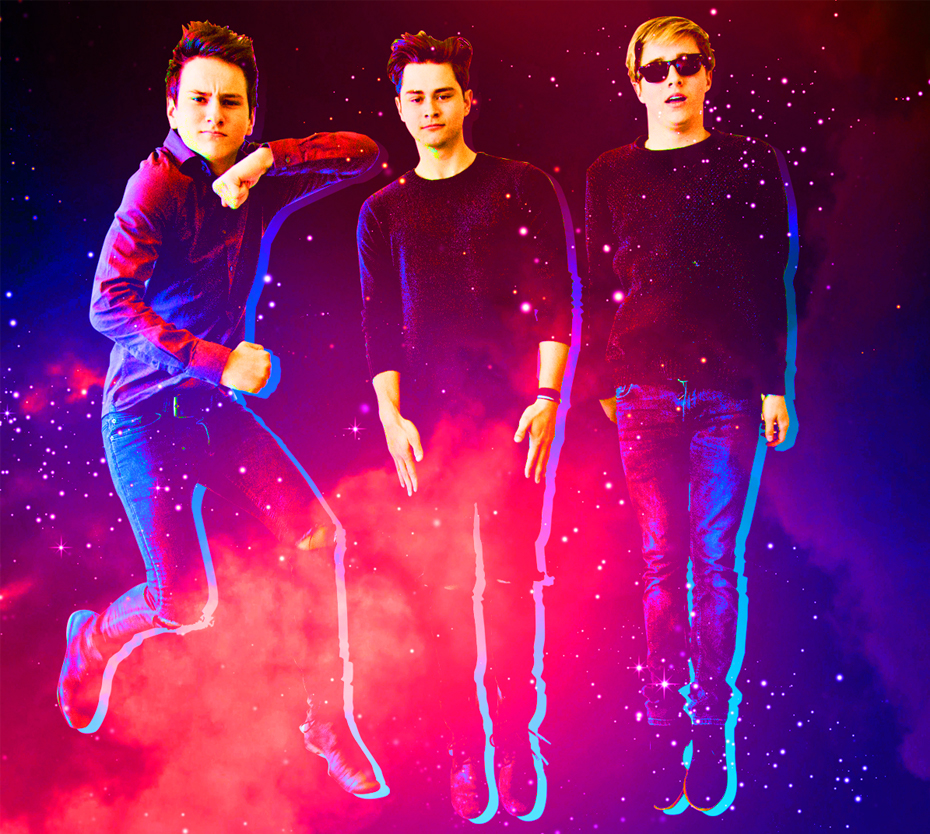 Sweety High: What's your fave song on your new EP, All the Lights?

Riley: I think our favorite song changes every day, it's kind of like they're all our children and it's not easy to pick a favorite, you know? Right now I think my favorite is "Radiate," though.

SH: Where did the name All the Lights come from?

Riley: All The Lights actually has multiple meanings to us, but the main idea of it is that it's kinda like getting through those dark places. The song "Radiate" kind of sums that up. Like when you're in a place and there's that thing or that person that helps pull you through the next moment. The EP kinda wrapped up our whole journey over the last few years.

SH: Which artists and producers influenced your cool new sound?

Connor: We listen to all kinds of music, so it's not really ONE artist or producer. We kind of draw from all over. But I think one thing we tried to focus on most was just trying to find sounds that were unique and not always going with the first sound we found. We spent a lot of time creating vocal samples and creating different things you can't really recreate – you can't really go into a synth program or a music program – and find. It's something that we spent time on to kind of make it unique.

Toby: It's cool because Connor actually produced/co-produced most of the songs on the EP.

SH: What's one song on the radio right now you wish you would've written yourselves?

Connor: I like the song "Middle" by DJ Snake.

Toby: I was going to say that, too! Literally, that melody just popped into my head. It's so catchy.

SH: Very difficult question…but if you were a food item, what would you be?

Toby: I could picture myself in a pizza suit. ?

Riley: I would be a big chipotle burrito.

Toby: Wait, I'll be both! I'll have a burrito in my hand but I'd be wearing a pizza suit.

SH: Do you have any hidden talents? Spill!

Riley: No, we're not very talented! ?

SH: Can you each show us your go-to selfie pose? 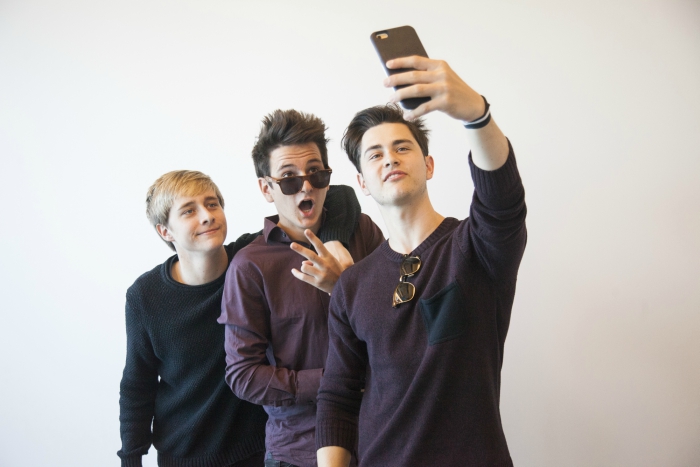 SH: What is something your fans might not know about you?

Toby: They might not know that I don't work out. They're probably like 'Dang he's pretty jacked but he doesn't work out? Oh, that's weird!'

Riley: I'm always switching my workouts up, but I just think it's fun to stay active, especially before going into sessions and sitting around all day and you're just like 'Ughh I feel like I ate a ton of pancakes.' That's the feeling that you have, you feel kinda gross. So it feels good to go out and be active. ?

SH: What's the craziest thing you've done to get a girl's attention?

Connor: I rented an airplane one time and wrote a nice message in the sky.

SH: Have you guys been to prom?

Connor: My 8th grade dance was so weird. It was one of those ones where guys and girls stood on opposite sides of the room.

Riley: All the school dances I went to my mom was always there because I was so young. I think the reason I don't like going out now is because in 5th grade I was telling my mom there was this girl I wanted to talk to and she walked over with me and I asked her if she wanted to dance and she goes, 'Nope.' From then on, I just didn't want to go out! That just stuck with me.

SH: What's the silliest thing you guys have ever fought about?

Riley: I think like who gets the front seat…as if that matters.

Toby: I think the back seat is actually better! I mean, it's just the three of us, so whoever gets it gets the whole row to himself. I learned that.

SH: What's the coolest thing a fan has ever done to get your attention?

Riley: Someone bought us a star in the sky and called it "Before You Exit" which is pretty cool!

Riley: Yeah, there's totally a star named after our band.

Riley: I have no idea. Buyastar.com? ?

SH: One of our fave songs off your new EP is "Model." Can you each show us your best model pose? 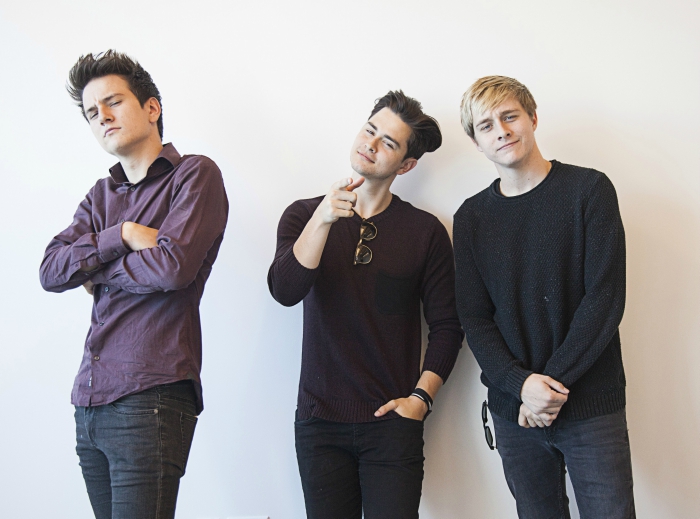 SH: What is the most bizarre thing that has happened while you were on stage?

Toby: Falling over happens A LOT.

Riley: When we were in the UK in Birmingham, it was like this whole cycle of bizarre things happened. I drank a water bottle and then threw it behind me on the ground. I guess I didn't screw the cap on all the way, and then Toby jumped and stepped on it. Then water sprayed all over the stage, and Connor, the unknowing victim, was just jumping around playing his guitar and then slipped, slid and did the full splits. It was totally mine and Toby's fault.

Connor: I took the punishment.

SH: What's the hardest thing about being in a band?

Riley: I think sometimes being away from home, but at the same time obviously your brothers are like your family and you're traveling with them, but it's just like you kinda live in phases. One minute you're completely gone in another country, and another minute you're sitting by yourself in your room. So there's definitely a lot of ups and downs. Still, I don't think we'd trade it for the world. It's amazing!

SH: Do you guys have special nicknames for each other?

Toby: We call each other names that don't make sense. Like we call Riley "Robby," and then we call Connor, "Collin." We just make up weird names.

Connor: And sometimes we call Toby, "Tody." It comes from the way he wrote his name when he was really young. He would write his b's as d's.

Riley: He thought his name was Tody.

Toby: The face swap thing is pretty funny. Cause you can do it and it's different every time!

SH: Can you make the same face as your fave emoji? 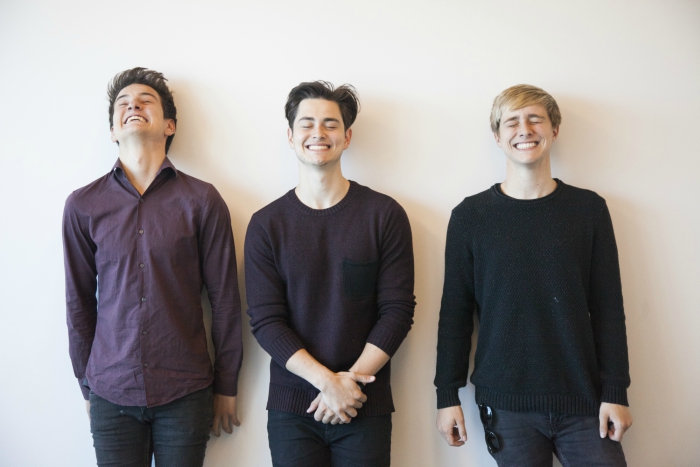 SH: What do you guys like to do outside of music in your spare time?

Connor: We're into going to the movies.

Riley: We pretend to be movie critics and we'll look at the reviews and then like give it our own assessment…not that our opinion really matters. But we talk about it like it does!

SH: What can your fans look forward to right now?!

Connor: Well, we just put out our new EP, and we're super excited about that and all the songs on there. We are going to be touring really soon, which is not announced yet, but people know we're going on a tour. We're just super pumped to get back out there and play all this new music!

Wanting to get to know Before You Exit a lil' better? We got you! Check out the last time they visited our office and played a ~revealing~ emoji game with our host Alex Shiffman HERE.