13-year-old Bella Head played a pivotal role in feeding hungry people across Ashland, Oregon when she was part of the group that developed the Ashland Emergency Food Bank garden. We spoke with Bella about her experience and how the garden has touched lives, plus what's next! 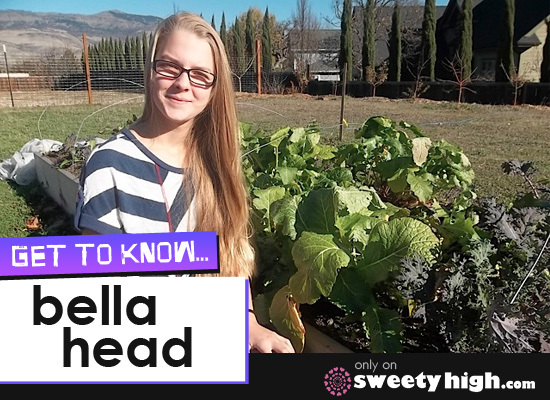 "I did not do a lot of gardening before the food bank," Bella Head told us. "My mom has always had a garden and I would water and churn the soil, but nothing like what I'm doing now."

"Before we started the garden, we brainstormed ideas on how to make a difference in our community," she said.

One of those community service ideas including working in a garden to grow money for a food bank.

"The idea came from me and a few other kids my age wanting to make a difference," she said. "We thought of all the hungry people that don't have enough money to buy food, and decided this was a project we wanted to address."

The group made calls around the city for weeks, seeking out a place to start a garden. In November of 2012, they found their match.

"We finally heard back from the food bank and had a meeting with them about our vision, and they hooked us up with some people who had similar goals," she said.

They started the garden behind the Ashland Emergency Food Bank in a 40×90 foot plot. Before it was converted into a vegetable garden, it was filled with star thistle, invasive blackberry bushes, and foot-tall weeds.

The group worked hard to turn the plot from a bundle of weeds into a thriving garden.

"We sawed, sanded and nailed the beds together ourselves," Bella said. "The raised beds are filled with a nice organic soil recipe we made."

From there, more and more people got involved in the gardening project.

"We began to work on the garden for at least an hour a week, weeding, chopping down overgrown blackberry bushes, planting fruit trees, harvesting, or planting little seedlings," Bella said.

"Surrounding the beds, we have rows of fruit trees and bushes and a nice fence enclosing the area to protect the produce from deer, which are everywhere!" she said.

The garden has produced about a hundred pounds of produce from four garden beds just this year.

Bella told us that she has learned a lot from the experience.

"No matter your age, you can make a difference," she said. "My persistence has grown a lot as well."

Working for the garden isn't always fun and easy, but Bella said it's always worth her time.

"When its 90 degrees out, I'm tired, thirsty, and just want to stop, and go home," she said. "Then, I start to think about what I am doing, and how much it will help if I stay and help. Seeing people in need get to eat fresh organic produce because of my help feels so great."

She gets to see the difference she's making when she sees the gratitude of food bank's shoppers.

"They can barely keep the produce in the food bank for more than 2 days!" she said. "Some people who have benefitted from the fresh produce have asked how they can help with the garden. It is becoming a community effort."

She has also been touched by the personal stories of people who have gotten to eat because of the cause.

"Once, a man told us how great it is that we are doing this, and that he had taken home some of our produce," she said. "It warms my heart to get feedback like this."

Bella has now spent more than 80 hours on the garden, and plans to continue working there even once she leaves the junior youth group.

Next, the group plans to raise $5000 to build a greenhouse.

"It is going to be really hard to raise that money," she said. "So far we have raised $850 through over 5 fundraisers."

To help with the project, Bella submitted an application for the Prudential Spirit Award of Community Awards.

"If you are one of the 10 national winners, you get $5,000 for your project, and $5,000 for yourself," Bella explained. "It would mean the world to me knowing that I am one of ten people that are making the biggest difference, or even chosen to be one of the hundred chosen from the states."

We wish Bella luck in her appeal to benefit the Ashland Emergency Food Bank!

Are you passionate about a cause? Join us at Sweety High to tell us all about what you've done to support your community!