In case you missed it, the epic speedrun event Summer Games Done Quick (or SGDQ) 2022 finished up over the weekend, featuring a straight week of unbelievable gaming prowess and fun, while raising a whopping $3,016,200 for Doctors Without Borders in the process.

The Games Done Quick are some of our favorite gaming events of the entire year, doing so much good for the world while also highlighting the best of the best gamers in the world. In case you missed it—or just aren't caught up—here were our 10 must-watch runs of the event.

Mi Scusi is by far the silliest game on this list, but the student-made game—and its run—definitely deserve a peek because of how ridiculous they are. Runner Bullets describes this game as something akin to Untitled Goose Game, except instead of playing as a cantankerous goose, you take control of Scusci Man, an Italian man bent on chaos. The hilarious run starts small before it sees Scusi man travel to the Pentagon and then space in increasingly goofy ways—and did we mention the game is free?

Bonk may not be a well-known protagonist today, but we're super nostalgic for the bald-headed caveman kid, and it was a treat to see LeadOstrich speed through his SNES game, showing off unique exploits and skips that we never knew existed while shrinking and growing Bonk (and feeding him meaty power-ups) to provide him with exactly what he needed to get to the end fastest. He's so good (and quick) that we just have to forgive him for entirely bypassing our favorite level, where Bonk gets swallowed up by a dinosaur, and you have to travel through its body to escape.

It's incredible what can be done when runners know the inner workings of a game and precisely how to manipulate them, and that's exactly what's done in this unique run of Super Mario All-Stars + Super Mario World. With runner SethBling at the forefront, and three other players on the three additional controllers, this run showed hyper-precise inputs in Super Mario World to manipulate Mario's power-up state and jump ahead to the credits in just over six minutes, before powering through the other four games on the cartridge in even less time. Seeing this stuff happen really is like watching a magician work his tricks. If you're into pure gameplay, and not technical exploits, this may not be your favorite speedrun to watch, but it absolutely blew our minds.

2020's Omori is a truly unique and gorgeous RPG, with psychological horror elements and a striking story that's all about overcoming anxiety, and while typical runs can take about 20 hours to complete, starsmiley managed to do it in this run in just two hours and 44 minutes. If you've played the game yourself, it's a blast to see her run through this game in no time flat—and if you're new to the game, you'll be introduced to its colorful world, its beloved characters and the darkness lurking in the world of Omori.

Shadow of the Colossus is a classic game for its epic fights against the 16 colossi of the Forbidden Lands, but it becomes even more impressive in this run, with RUBIEHART tackling them all in a random order based on a dice roll. Their run demonstrates some fantastic tech and skips as they take down each incredible creature in increasingly innovative ways—belied by the sadness in destroying each one. Not only is this a great run for fans of the game who want to learn a few pointers, but if you happen to like songs about games, performed by runners on the ukulele, be sure to stick around for that at the end of the run, too.

Think you know Super Metroid? This ROM hack takes the framework of the game and creates something entirely different from its parts, featuring more difficult challenges, tons of secret areas and segments that will give you a real run for your money. All the while, runner Oatsngoats demonstrates the nuances of Super Metroid movement and tech in this new environment, playing with precision at every turn in order to survive this sometimes cruel and unforgiving take on a classic series.

Super Mario World is almost 22 years old at this point, but fans around the world are still making their own creative ROM hack levels and dialing up the creativity and challenge—and some of the very best teamed up to make a series of levels called Legends of the Hidden Thwimple for this year's SGDQ. The race saw CarlSagan42, Shoujo and juzcook on the Double-Jump Dinos against BarbarousKing, shovda and ThirdWall on the RNG Dolphins, racing through a series of mind-bending levels, without ever having seen them before. We won't spoil it for you, but you should definitely watch until the very end—and if you're into ROM hacks yourself, you can find the Legends of the Hidden Thwimple levels HERE on SMW Central.

If you're not familiar with the term TAS, it means "tool-assisted speedrun," meaning that TAS runs implement incredible tech with help from a computer to pull off moves that are way too precise or fast for a human to do on their own. This makes this Portal 2 run lightning fast, breaking the game's physics, performing incredible skips and moving through this puzzling game with a quickness that would otherwise be impossible. Even slowed down, the game goes way too fast to see everything that the computer pulls off in this run—and this one kept some things secret to show them off for the very first time at SGDQ.

The team-based ghost-hunting game Phasmophobia was a massive hit when it first dropped in 2020, so if it's been a minute since you've checked it out, it's entirely worth a revisit due to all-new maps, ghosts and tools—and this race against the clock starring Brossentia, NPC, FlannelKat and Peace Egg shows it all off in the coolest way possible. This crack team knows the game like the back of their hands, working together to explore haunted spaces and diagnose their specific ghost problems in record time. We knew we were in for something good when they figured out the culprit of the first haunting in less than six minutes, and this one had us riveted from start to finish.

1. The Legend of Zelda: Ocarina of Time TAS by dwangoAC, TASBot, Savestate and  Sauraen in 53:05 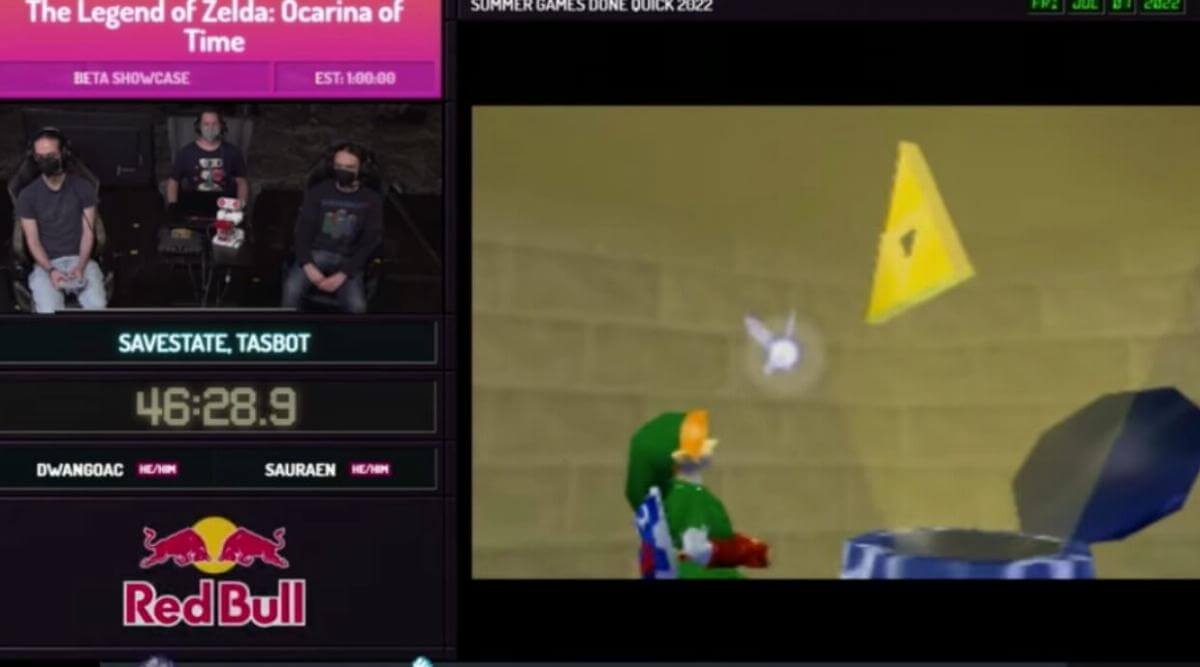 If you're only going to watch a single run from this year's event, we have to recommend The Legend of Zelda: Ocarina of Time TAS showcasing all of the incredible things that are possible when you know how to manipulate the data on a Nintendo 64 running in real-time. This is primarily a beta showcase, revealing content that was cut from the original game as it might have been seen in the original game in 1998, but you'll never anticipate where this one ends—and we're not going to lie, we got a bit choked up at it.

Want to see what we loved from AGDQ 2022? Click HERE to check out our favorite runs from that marathon.