Canadian singer-songwriter Betta Lemme is an artist who knows how to captivate audiences from the very first listen.

She first hit the scene being featured on Sofi Tukker's single "Awoo," and since then, we haven't been able to get enough of her music. Some of her songs incorporate her talent from language, including singing in Italian or French (or both), in addition to English, and all of her songs capture a bold sense of fun, without ever straying from her personal truth.

She released her sophomore EP, Ready for the Weekend, in November, which managed to be playful, without ever sugarcoating her sometimes difficult reality. That authenticity really seems to resonate with fans—us included—and here's everything we learned about her as our latest Woman Crush Wednesday. 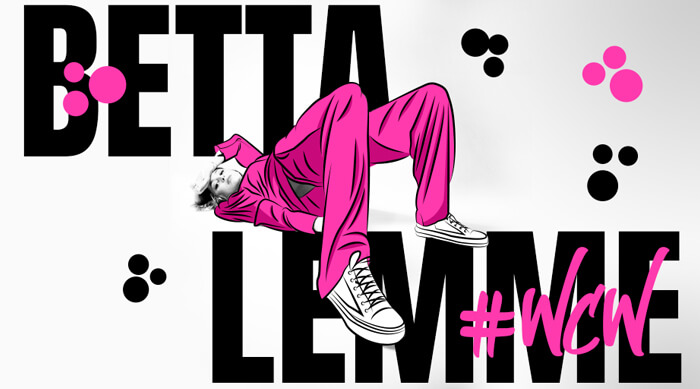 Hometown: Wherever my friends are

"I like how quiet the night can be. It helps clear my mind."

2. She says she wishes she would have learned the importance of standing up for herself earlier on.

"Never feel bad for standing up for yourself and don't let anyone get in the way of your dreams or self worth."

3. In three words, she'd describe herself as sensitive, strong and thoughtful.

4. The best concerts she ever went to were Adele and Céline Dion.

"When I saw them on stage, they were speaking to the crowd as if they would have also been in my living room. Incredibly down to earth, funny, vulnerable and real."

"I can't ski and I'm not fond of spending time in the snow."

6. She'd love to borrow the settle of Sailor Moon in her full sailor uniform or Lara Croft from the Tomb Raider series—holster included.

7. People often come to her for help when they're doing a little soul-searching, whether they need advice on navigating difficult times in their life, or just need some tips on how to follow their hearts.

8. When we asked Betta her favorite song of all time, she didn't dare pick just one. A few favorites include Abba's "Voulez-Vous," Aqua's "Lollipop" and Adele's "Rolling in the Deep." She really can't get enough of Adele in general.

9. Her best school subjects were psychology and English. She liked music, too, (even if she failed the class.) But she was never a good math student.

"Math wasn't particularly enjoyable… at all."

10. Her go-to nail polish color is a classic pinkish nude.

"It goes with anything I want to wear."

12. She has a very particular dislike of a beloved herb.

"I want whoever supports my music to know that I really dislike coriander. You'll have to learn the rest when you see a show or hop on an IG live with me."

For more on our favorite powerful and talented singer-songwriters, click HERE to learn everything you wanted to know about Australian artist Peach PRC.