If you know me, you know I love snacks—and the more unique and original, the better.

I've been eyeing Bokksu, a unique box packed with authentic and premium Japanese snacks, for a while now, but it was only recently that I was able to get in touch with the team behind the box and arrange to have a sample sent to me. After digging into the box, I was so glad that I did.

Curious? Here's what Bokksu is all about, what they have to offer and what I thought of every single snack contained within the first box.

Bokksu is all about curating boxes of handpicked snacks to bring the incredible flavors of Japan to their customers. Every month, they deliver a substantial box of Japanese treats to your doorstep, and while the themes change from month to month, new Bokksu initiates are always introduced with the Seasons of Japan box, which I was sent for review.

This box of treats allow you to learn more about Japan's regions, holidays and seasonal celebrations through the snacks that reflect their culture. In addition to including 16 fabulous snacks (including doubles of some, so that you can share with a friend or enjoy them twice), the box also comes with a detailed booklet, or Culture Guide, with lots of great information about the treats within. Not only can you learn where the foods come from, and learn some fun facts about them, but you also get important dietary info on them, such as whether they're vegetarian of if they contain any common allergens.

Bokksu boxes range in price from $39.95 per month to $49.95 per month, depending on the length of your subscription or whether you only want a single box. Shipping is always free on their boxes. And if you love something in particular, you can also shop for gift boxes, individual snacks and teas in their marketplace. 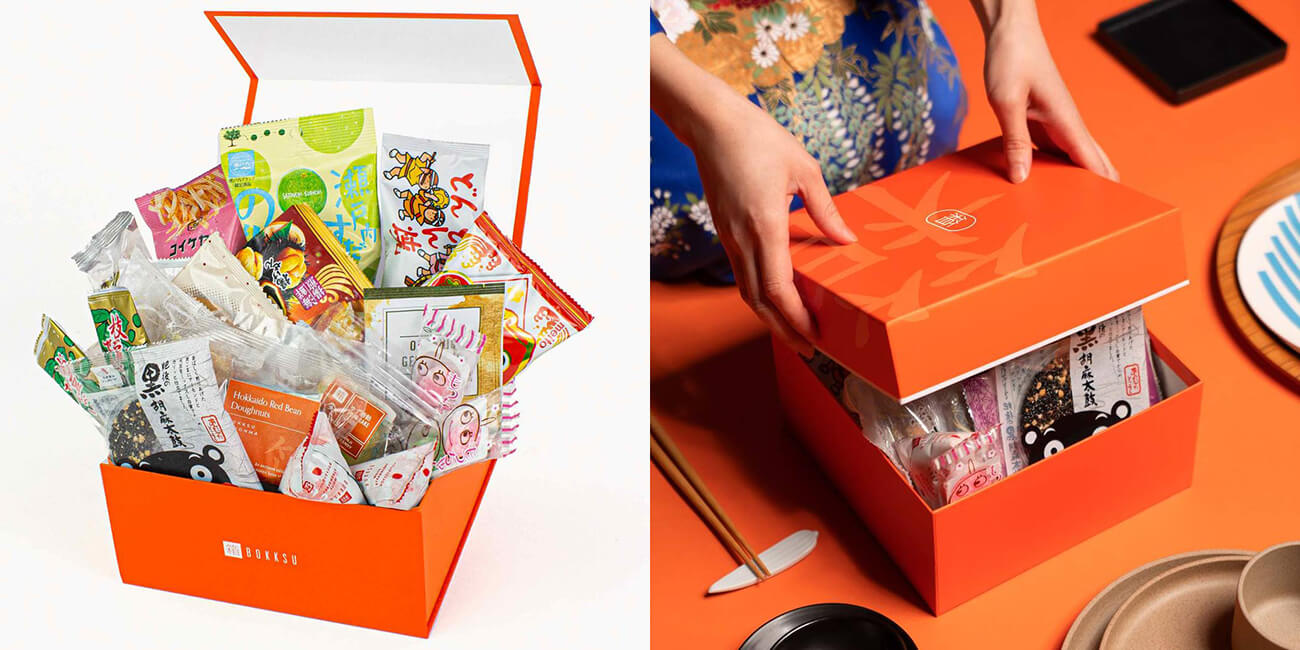 These delectable and delightfully colorful mochi cakes are just what you'd want in a sticky rice dumpling. These treats are popular during the flowering viewing season in the spring when the cherry blossom trees are in bloom. While the white is mostly sweet, with a gentle ricey flavor, the pink one had a vaguely fruity taste, while the green was infused with a delightful melon essence. Best of all, the box included two packs, so I could enjoy these twice! 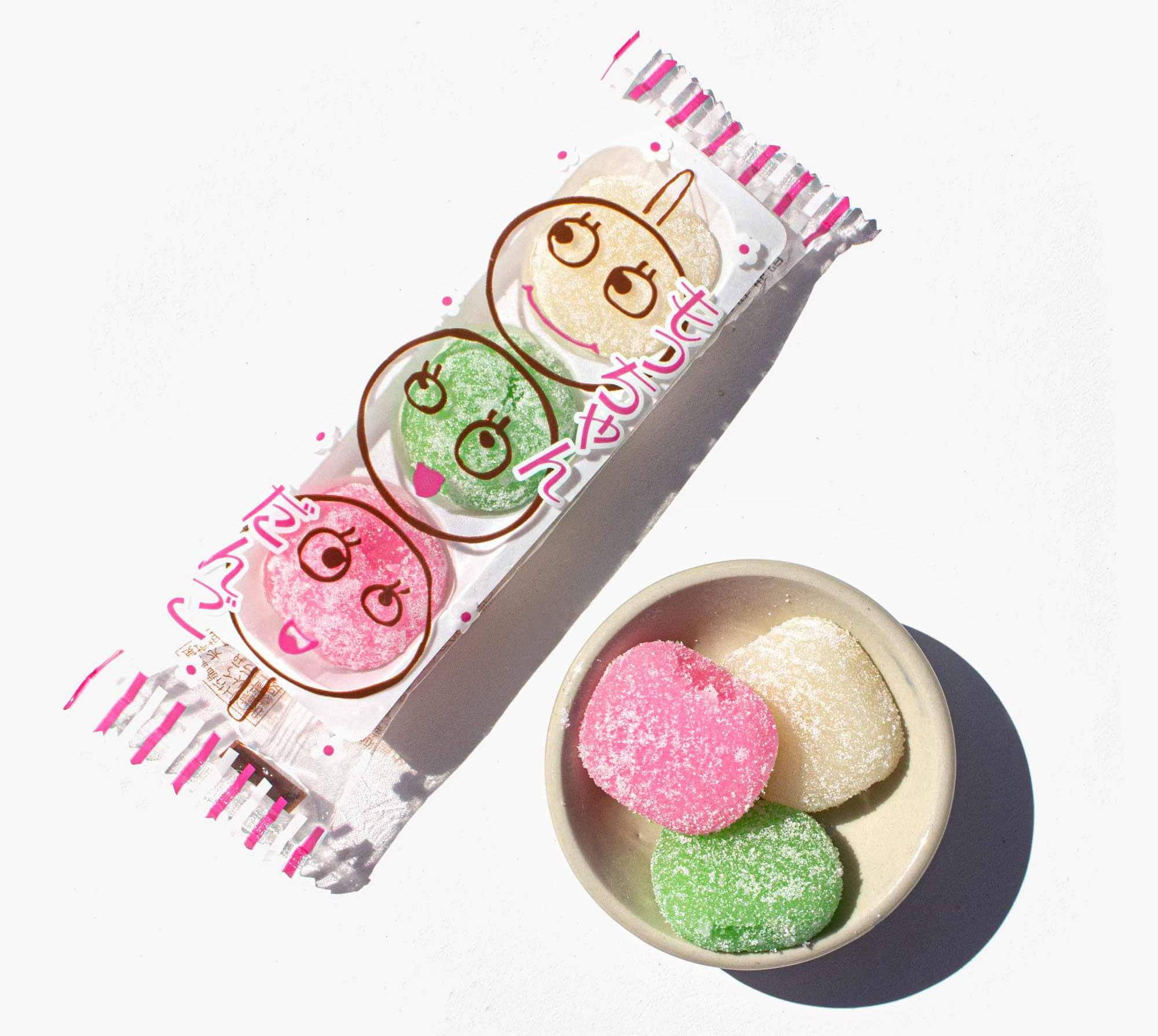 When you think of potato chips, chances are that you think of salty, savory flavors. These potato sticks do something a little bit different with their pickled plum flavoring. Yes, they're salty, but they're also sour, with a hint of fruity sweetness. The flavor combination may sound strange, but it's actually a delight, and this bag was finished in a single sitting. 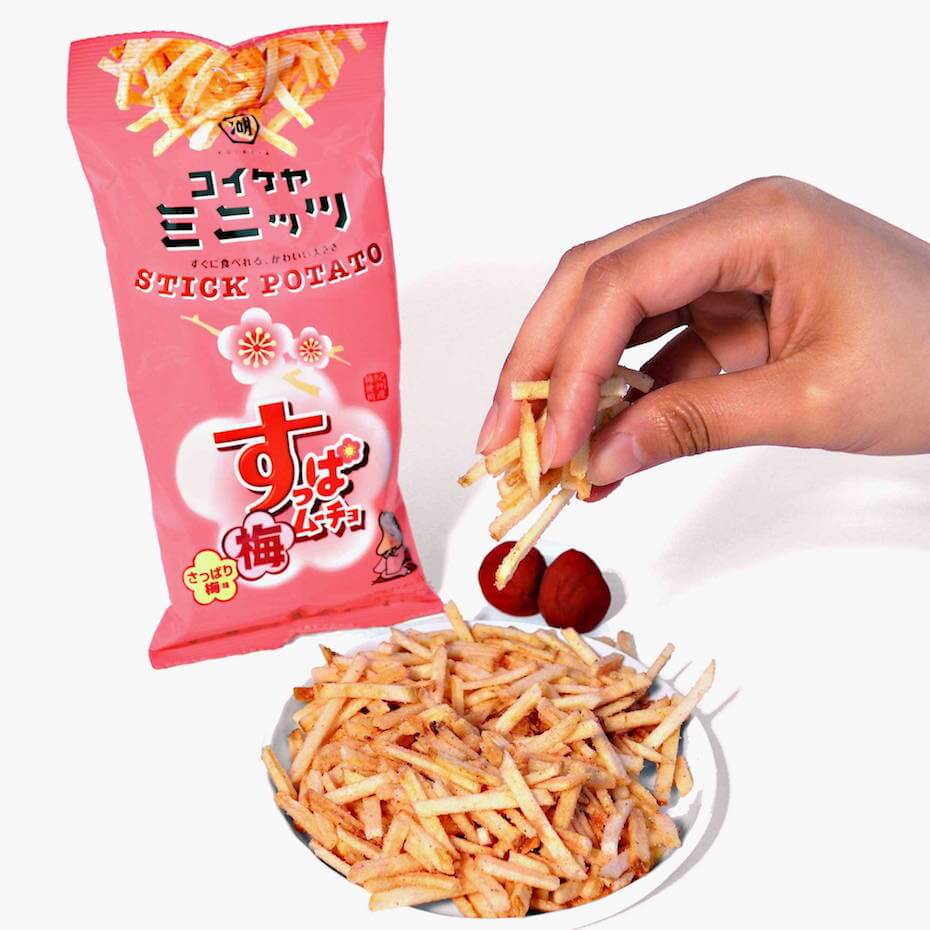 The 20th Century Asian Pear is a unique variety of fruit that traces its lineage back to 1888. Here, its flavor is combined with a cheesecake-like blend of cheese and white chocolate, and sandwiched between two delicate cookies, to create something exquisite. 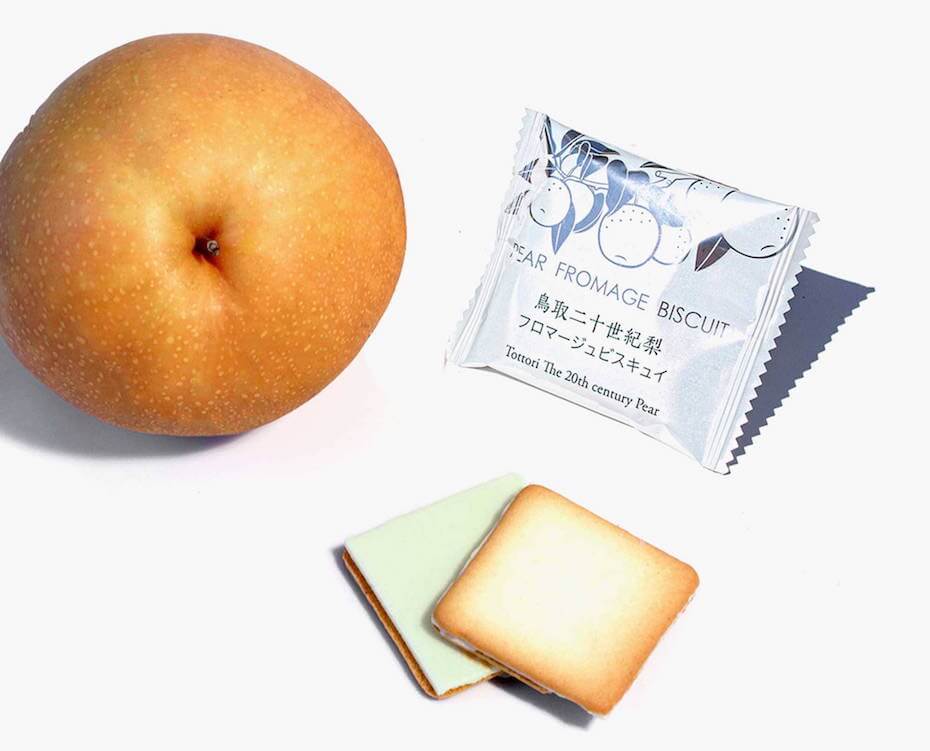 This delicious Bokksu-exclusive item was unlike anything I'd ever tried before. To make this dessert, strawberries are freeze-dried before being infused with white chocolate. The result is essentially what a strawberry would taste like if you replaced all of the water inside with white chocolatey goodness. It's so tasty and truly unique that I wish they'd included more than two in the box. 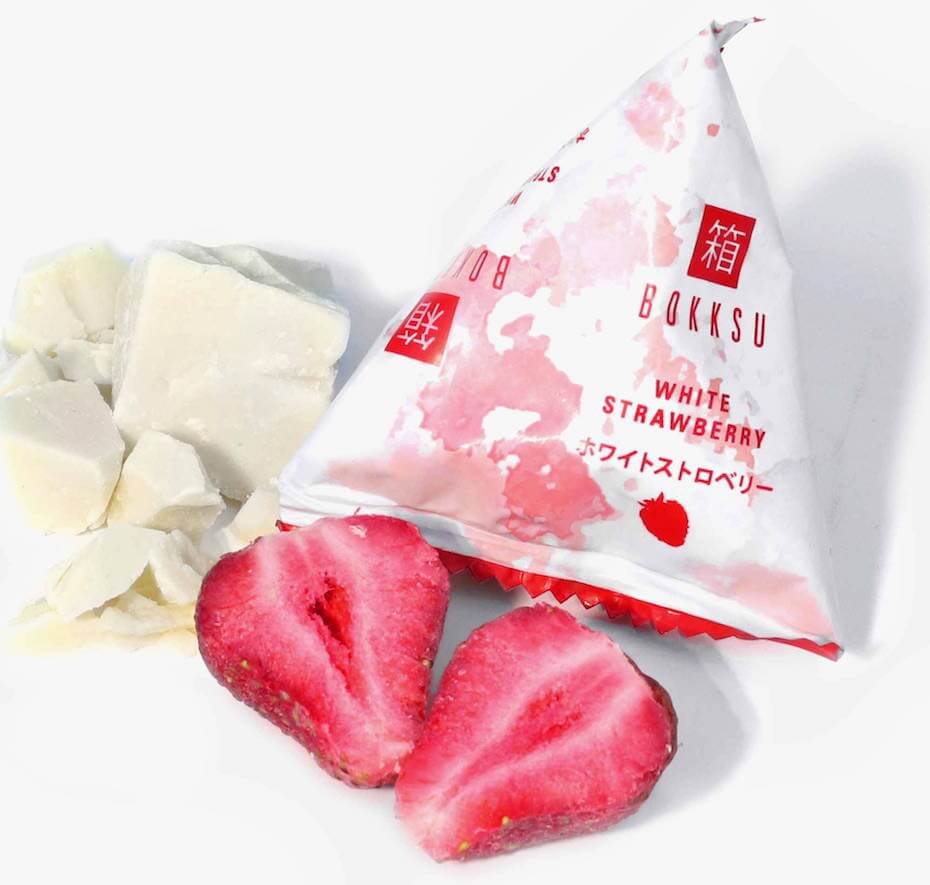 Japanese snacks are known for their exquisite flavor combinations, and this Edamame Senbei is no different. The cracker is made from soybeans, and it's sprinkled with a roasted soybean powder that's partly sweet, and partly rich, nutty and savory. Plus, its crunch is out of this world. Good thing there are two in the box! 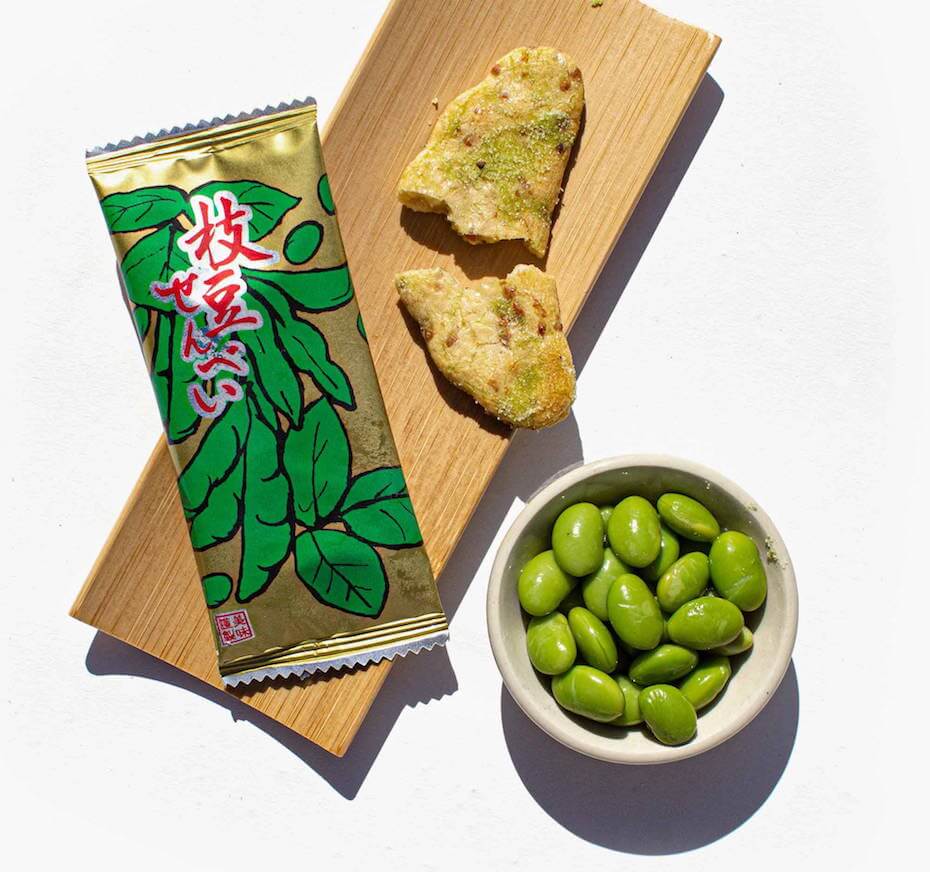 Who thought that seaweed could make for such a crunchy and satisfying snack? By frying the bits in tempura, this treat gives seaweed a beautiful texture—and it's got an amazing flavor, too. These are flavored with the sudachi citrus fruit, making for something that's crispy and savory, but with a tangy, sour edge as well as salt. 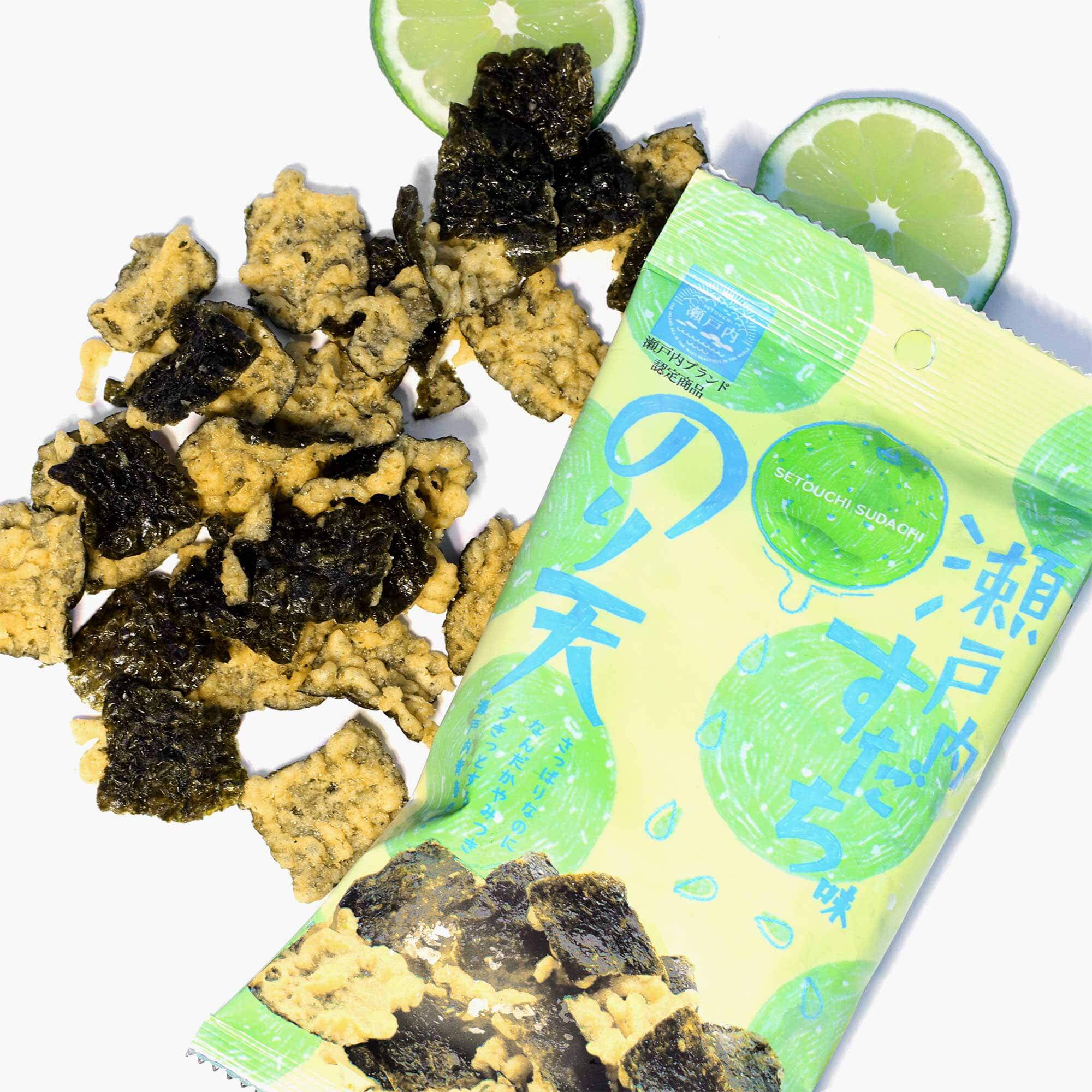 Yuzu is a delicious Asian citrus with a flavor somewhere between a lemon, a lime and a grapefruit. It's found often in Japanese desserts, and for good reason. These yuzu hard candies are more on the sweet side, but they're so good you're likely to be popping one after the other. 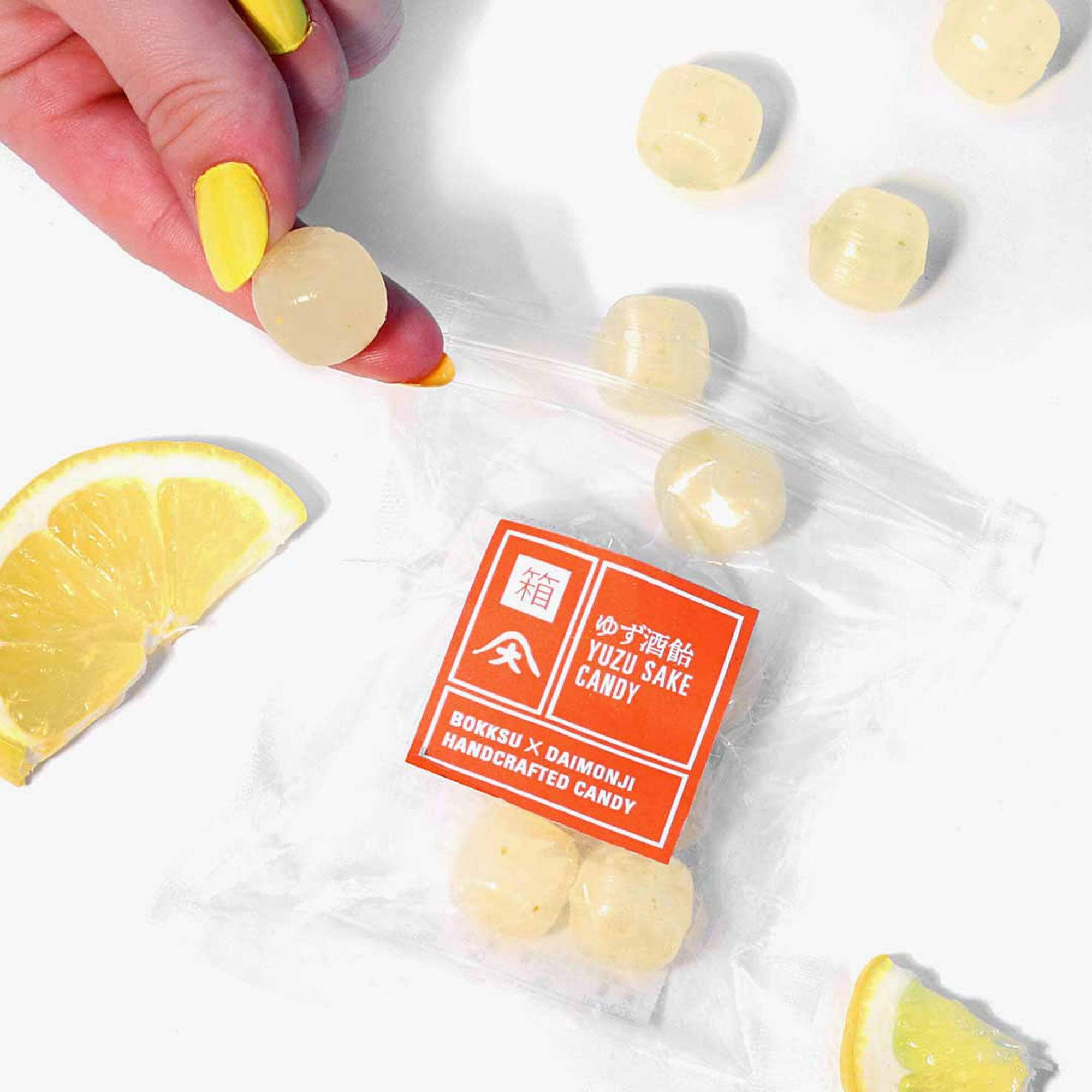 Just because you've tried one Japanese rice cracker doesn't mean that you've tried them all, and these Dondon Yaki senbei are proof. Flavored with tonkatsu, a Worcestershire-type sauce best known for being served with pork cutlets, it has a rich, well-rounded flavor that mixes salt, vinegary tang and sweetness to be instantly cravable. It's a good thing, then, that the box contains two packs. 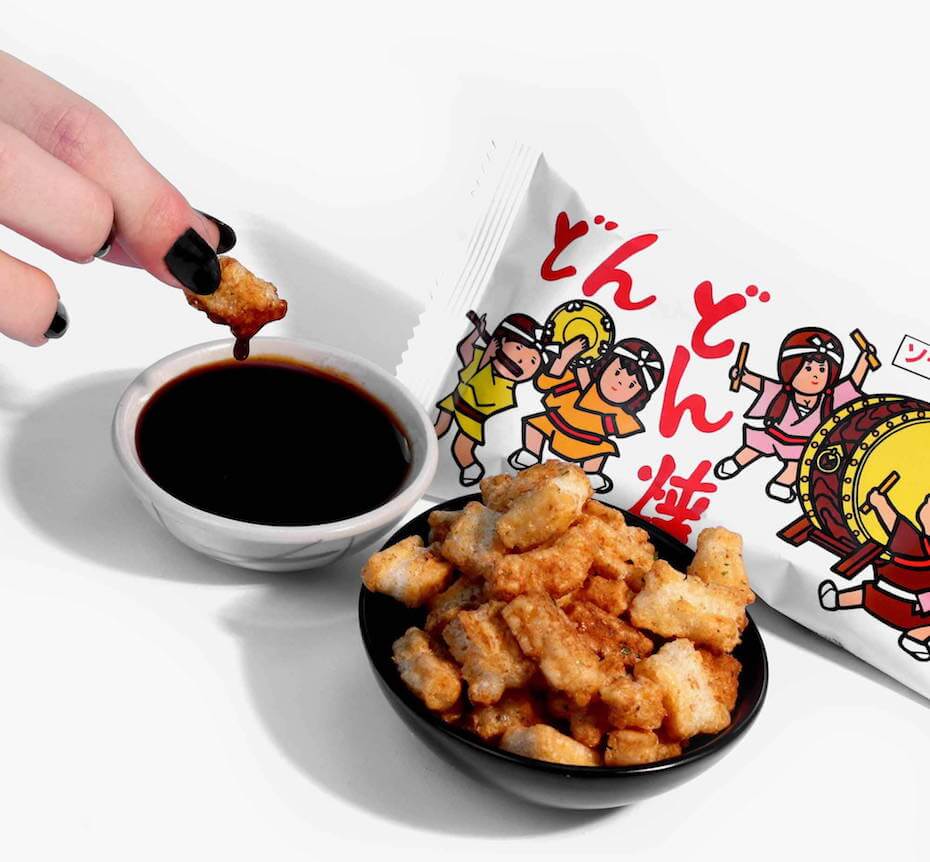 I'm not generally a huge fan of red bean paste, so I had some hesitation about biting into these filled donut holes. I shouldn't have. Made with Hokkaido azuki beans, the paste within these was just the perfect blend of sweetness with a rich, earthy flavor. Though the bread on the outside wasn't super sweet itself, it didn't need to be thanks to the red bean paste. In fact, this dessert may have single handedly changed my mind about the ingredient. 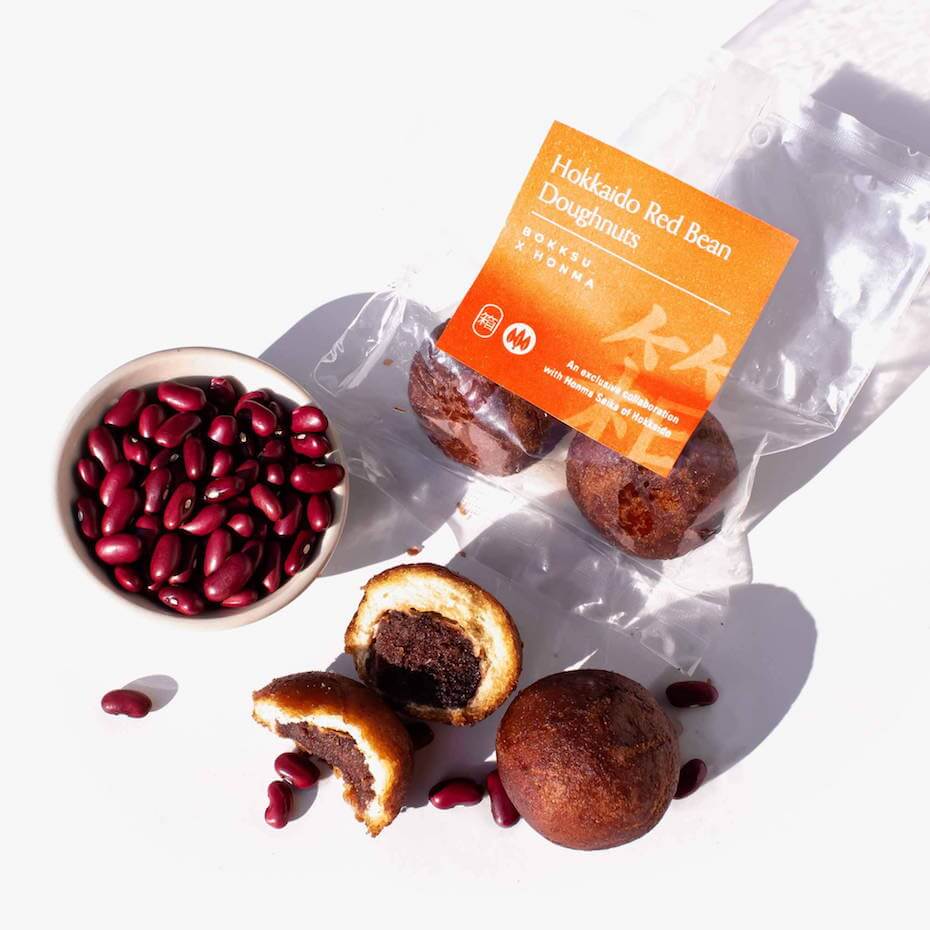 Matcha is a finely ground green tea powder that's a beloved and often-used dessert ingredient in Japan, and I loved the way it was incorporated into this tasty stick cake. The matcha gave the slightly sweet cake a rich, earthy taste just short of bitter, and the addition of bittersweet chocolate chips balanced well with those notes. 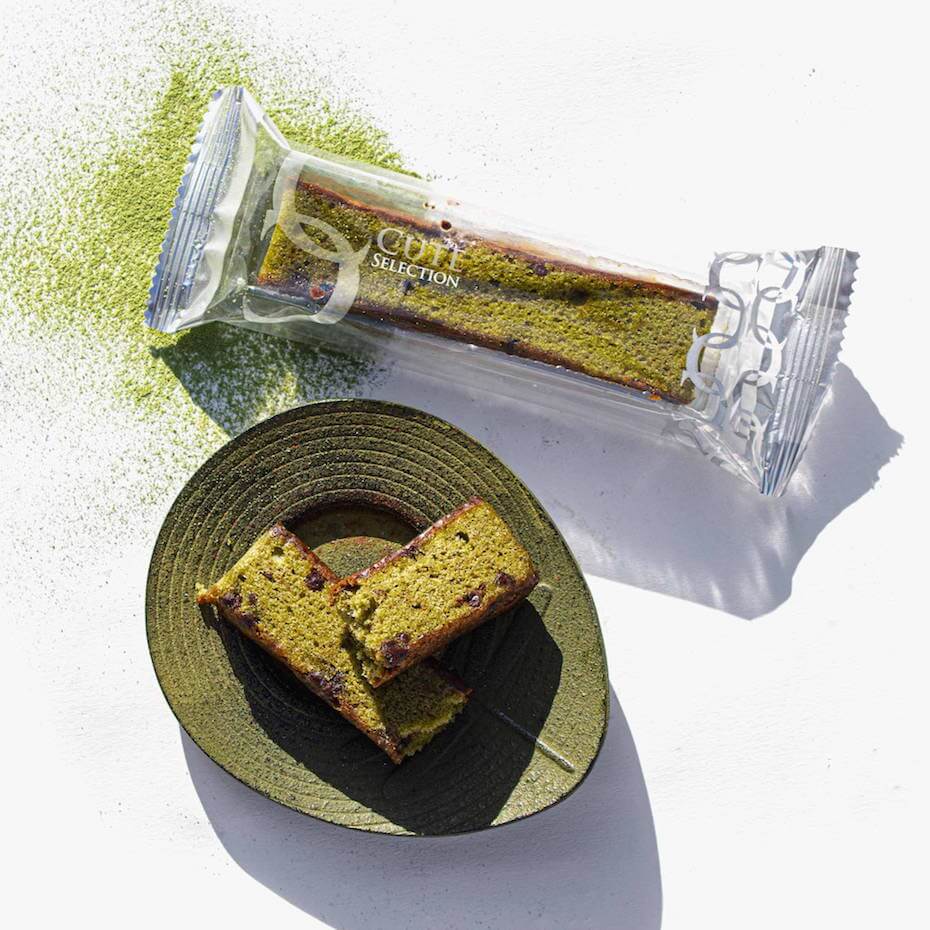 This unique, disc-shaped treat is made of black sesame seeds and almonds, mixed together in a sugar syrup. The result is a wonderfully crisp, sweet and nutty snack. These were made in Kumamoto, where the adorable bear mascot, Kumamon, lives—which is why he's featured on the packaging. 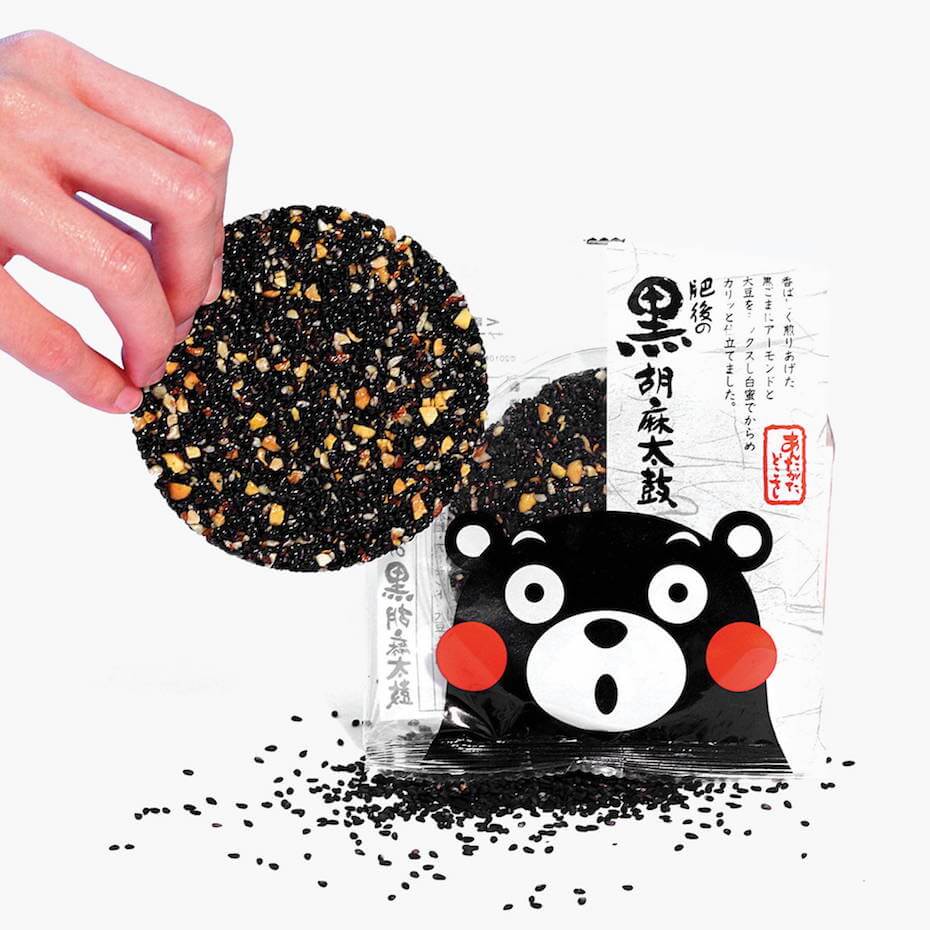 Aomori is known as Japan's apple prefecture, which is why it's the source of the apples in this delicious caramel apple cookie. The buttery cookie has a soft, chewy texture, with the incredible blend of apple and caramel focused in its center. 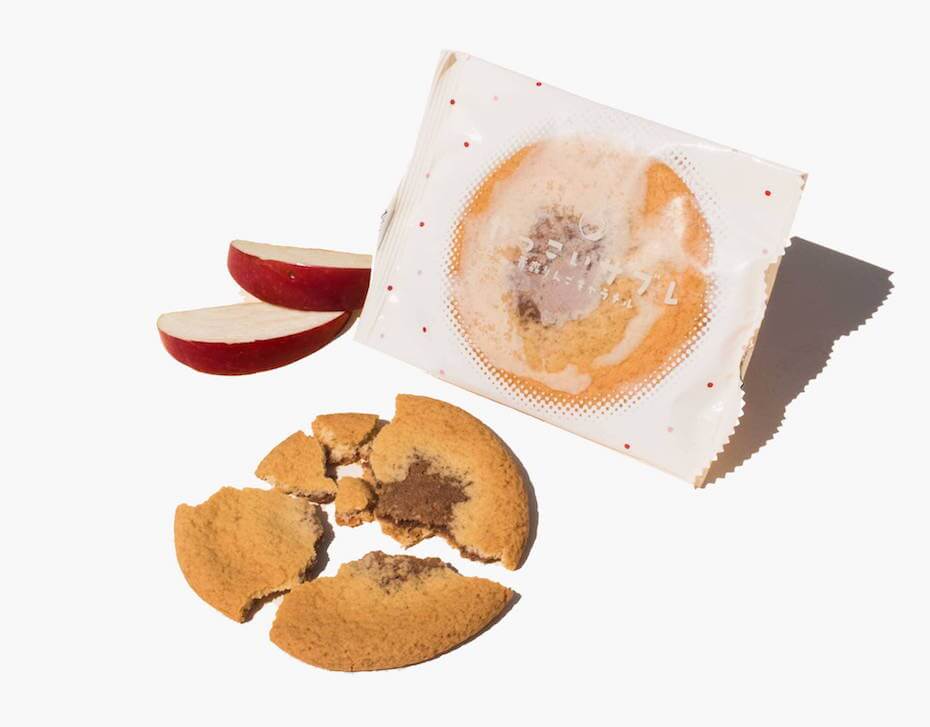 These  delightfully crisp mochi puffs don't just have an amazing crunch—they taste fabulous as well. Thanks to a dusting of roasted soybean powder, they're a little bit sweet, and a little bit savory, with a nutty finish. They're all too easy to pop into your mouth, disappearing in an instant, which is why it's nice that there are two bags in the box. 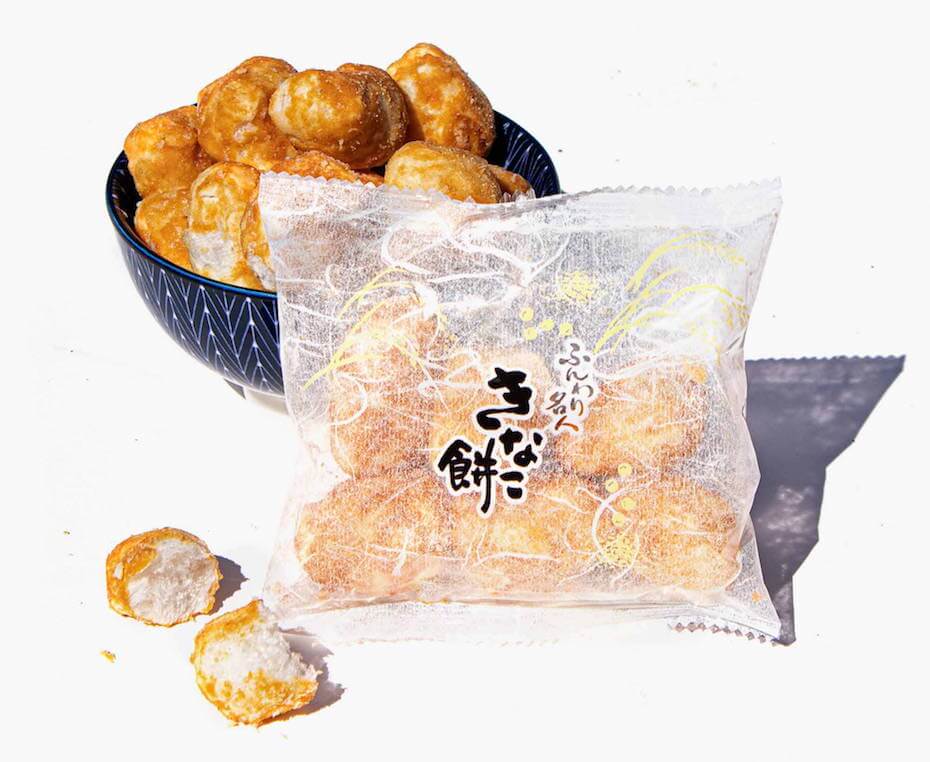 Genmaicha tea is a Japanese staple that combines green tea with roasted brown rice. In the olden days, the brown rice was added as a filler, to make it possible to drink more tea without using up as much pricey green tea, but it's stuck around thanks to its warming, earthy taste. In fact, I was so obsessed after getting through the two included green tea bags that I went out and bought some more genmaicha. 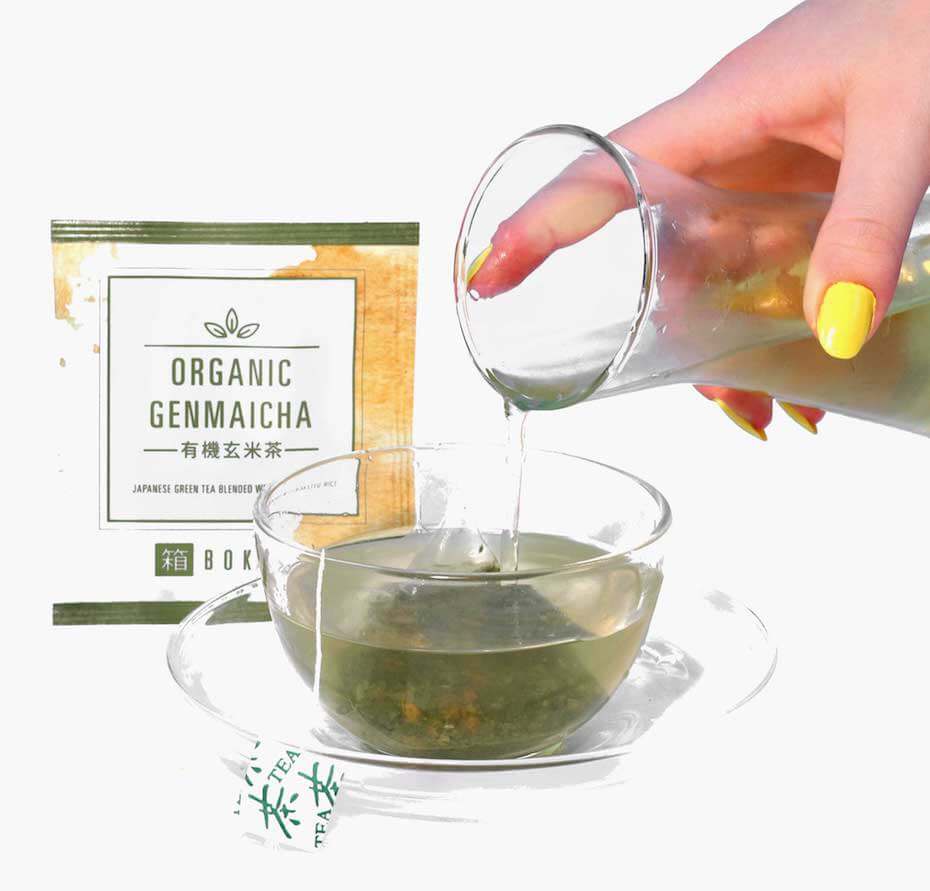 Taiyaki is an iconic Japanese dessert that's shaped like a red snapper before being filled with ingredients such as red bean paste, custard or chocolate.  This unique variation takes that fish shape, with the outside being crisp and airy like a waffle cone, and instead fills it with soft, aerated milk chocolate. 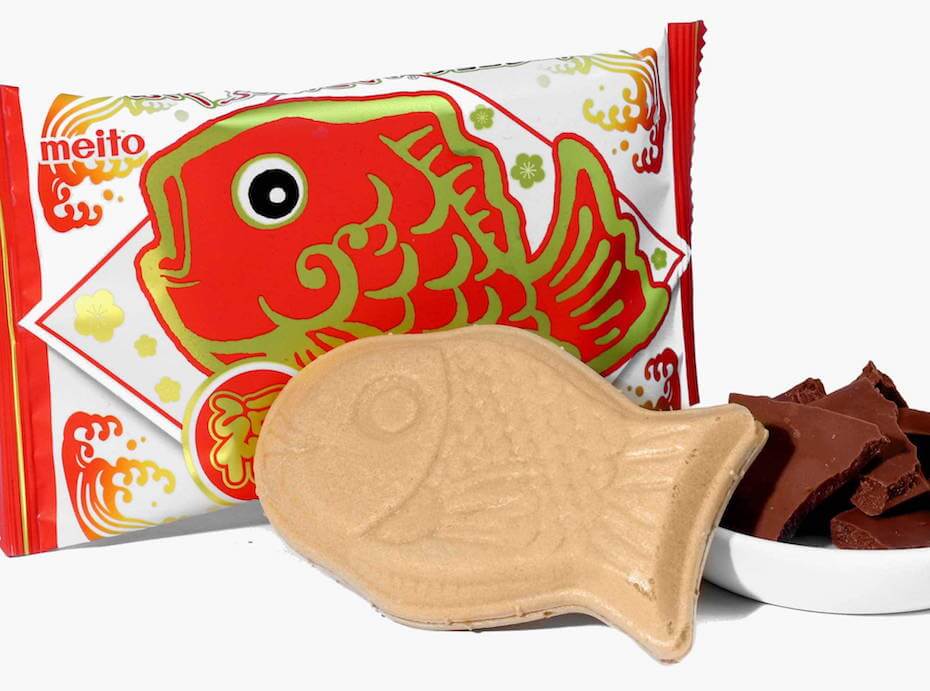 Last but definitely not least in the box were the Uni Rice Crackers. Uni is sea urchin, and while I'm not the biggest fan of the very fishy flavor in its sushi form, I found it quite tasty when used more subtly to flavor these crackers in combination with sweet and salty soy sauce. The crackers even look a bit like sea urchins themselves. 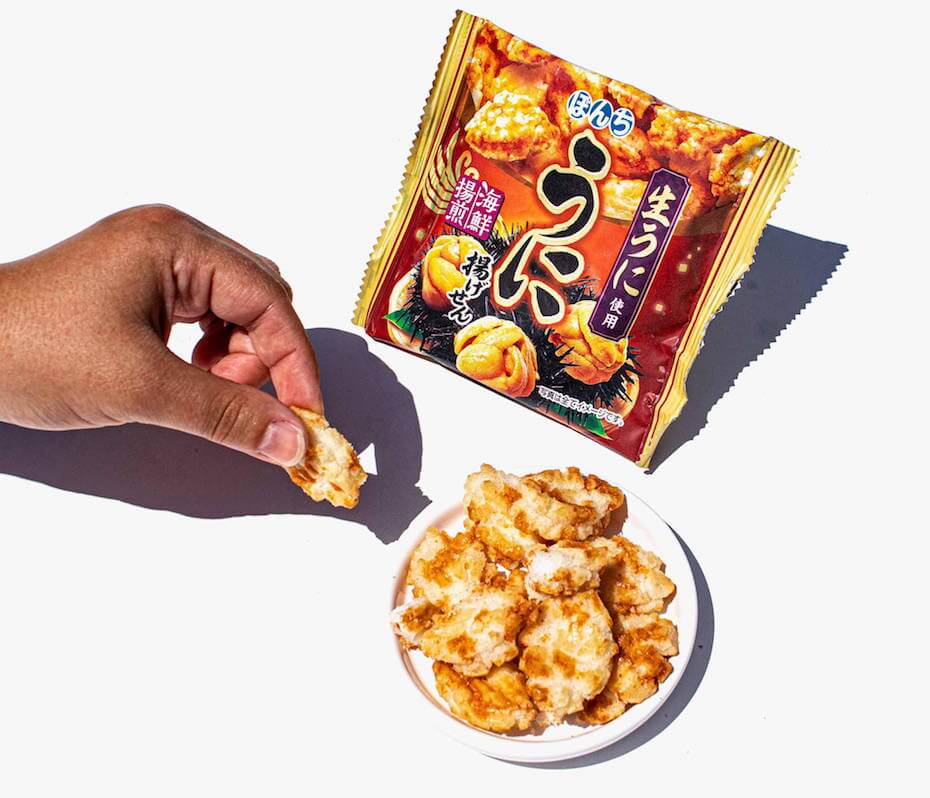 If you're someone with adventurous taste buds who loves exploring new flavors as well as textures when you're trying new snacks, you can't do much better than Bokksu. Not only do they offer a ton of variety in their boxes, with a wide range of flavors and a good mix of sweet and savory offerings, but each item is high-quality and authentic to Japan.

Of course, there are some people this won't be for. If you're a picky eater who cringes at the mention of flavors like pickled plum, red bean paste and sea urchin, Bokksu probably won't be your cup of tea. Price-wise, it's also a bit of a commitment—especially if you're not sure if you're going to like how the snacks taste. However, if you keep an open mind, I bet you'll fall in love with everything in these boxes. They also would make a great gift for anyone who loves Japanese food or the country's rich culture.

Want to try snacks from beyond Japan? Click HERE to read our review of Universal Yums, the snack box company that brings you foods from around the globe.