Hayley and Annie Of Bratayley Dish On Their Nintendo Favs!

Bratayley is a popular YouTube channel consisting of vlogs featuring siblings Hayley, Annie and Caleb. The trio recently teamed up with Nintendo for an awesome Nintendo 3DS campaign, so we caught up with 10-year-old Annie and 6-year-old Hayley to learn all about it! 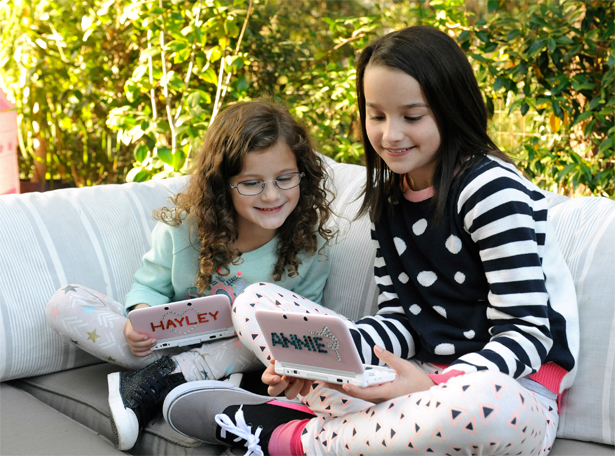 Annie and Hayley agreed that their favorite thing about Nintendo is their Nintendo 3DS system. The portable, handheld system features lots of great games, a touchscreen and a 3D screen.

"I like that you can see in 3D without the glasses," Annie said.

One of Annie's favorite games is Animal Crossing, a game where characters move into a village full of talking animals, where they can own their own house, grow collections, make friends and lots more!

"I like that I get to be the mayor," she explained.

The game is also a blast because it's so open-ended. Hayley noted that she got to have her own umbrella, and Annie put a flower in her character's hair and owns her own house.

"I haven't decorated my house, but I have talked to a lot of the people there," she said.

She recalled a hilarious scene involving a dog named Isabella.

"One time I didn't get on in a long time and Isabelle was like, 'You haven't been here in a long time, I might as well have taken your place!'"

The siblings recently filmed an ad campaign with Nintendo. Hayley and Annie said the experience was incredible.

"Hayley really liked the bunnies," Annie said. "We were filming and we got real live bunnies and we got to pet them."

"And we also got to eat cupcakes!" Hayley added.

We asked them what it feels like to vlog with their siblings.

"It's normal now," Annie said. "It was just that I never wanted to talk on the camera. I would always want Caleb or Hayley to talk, but now I've gotten more used to it."

The three kids have managed to become stars with their now daily videos, amassing more than 600,000 subscribers on YouTube. Annie said she was shocked by their popularity.

"At first my mom just started filming and I didn't even know what YouTube was!" she said.

Curious about Bratayley? Subscribe to them to keep up with their YouTube vlogs here! Let us know what you think of it in the comments and tell us about your Nintendo 3DS favorites at Sweety High!