As an ice cream fanatic who reviews tasty treats as part of her job, I've tried a lot of frozen desserts in my time.

While I can definitely get behind low-sugar, low-calorie and vegan options on occasion, I've found that there's really no substitute for the real thing when it comes to flavor and texture.

That was, until I got the chance to try Brave Robot ice cream. Through the magic of science, they've unlocked the flavor and texture of dairy in an entirely plant-based dessert. As soon as I heard about it, I knew I had to give these ice creams a taste—and their creators were generous enough to send four tasty flavors my way.

"Brave Robot" may sound like a weird name for an ice cream company at first, but once you find out what they're all about, the title starts making more sense. Basically, it's possible for them to make vegan, lactose-free and plant-based dairy ice creams due to some incredible science.

That's achieved by creating a plant protein identical to the whey protein found in cow's milk. In the ingredients lists, this is referred to as "non-animal whey protein," and the ideal result is that the ice cream tastes and feels no different from standard ice creams, but in a form that's better for you—and for the planet.

Technically, Brave Robot costs $5.99 a pint, but because shipping frozen treats via FedEx gets pricey, the costs can add up. Their pre-selected four-packs sell for $58, including shipping, while their eight-pack (featuring every Brave Robot flavor) sells for $80 with shipping. However, the company will refund the entire shipping cost if you take a photo of yourself asking your local grocery manager to stock Brave Robot. That's a win-win, because you'll get your cash back and be able to buy their ice cream locally.

I always start my taste tests with the most—well—vanilla flavor of the bunch, and this time around, that was the Vanilla 'N Cookies flavor. I was a little surprised when, unlike other vegan ice creams I've had in the past, this ice cream's little tub didn't tell me to thaw the ice cream on the counter for five minutes before digging in.

When I opened it up, pulling off the protective paper lid over the cup, I could see why. This ice cream was already creamy and luxuriously soft straight out of the freezer. The appearance, with the bright vanilla ice cream flecked with cookie pieces, was super appealing, and I was so ready to dig in.

From that very first spoonful, I was completely sold. The texture was perfectly creamy, the vanilla flavor was just right and the balance of soft cookie pieces came together nicely. I honestly couldn't believe what I was tasting was vegan.

A quick glance at the nutrition facts also showed me that, besides being plant-based, it was like standard ice cream in all other respects. It had full fat, full calories and full sugar. So it wasn't exactly healthy, but it was worth every bite. I shared the cup, and the 14 oz. package was gone by the end of the night. 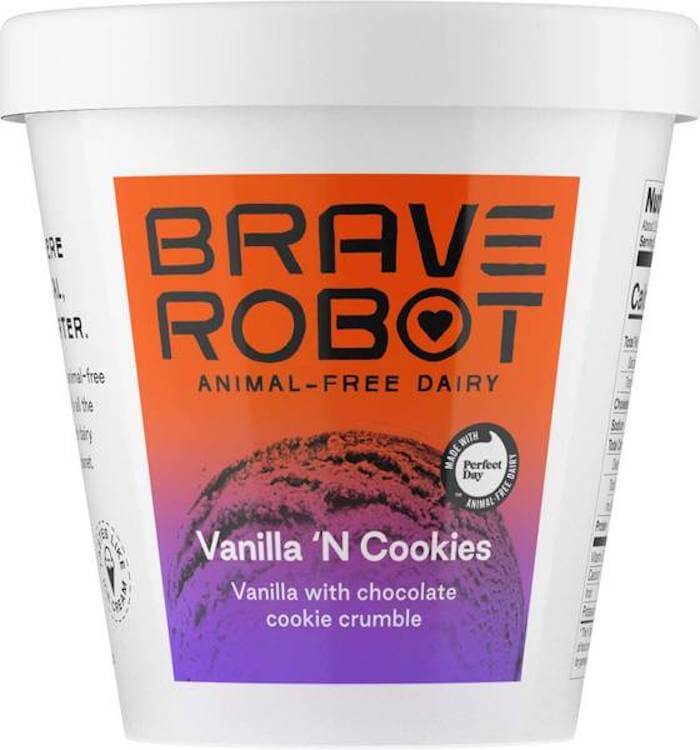 After the very classic flavor of vanilla and cookie pieces, it was time to move on to something slightly more adventurous. I wasn't at all sure what to expect with this flavor, but again, I was pleasantly surprised.

While it had a vanilla ice cream base, it had graham cracker bits throughout that gave the entire tub the taste of cinnamon sugar. But this flavor really shined when you got a bit of the blueberry jam swirl, adding a bright tartness to the mix. Again, it was flawlessly smooth, and it only lasted through two sittings because we forced ourselves to put it away so it could be savored. 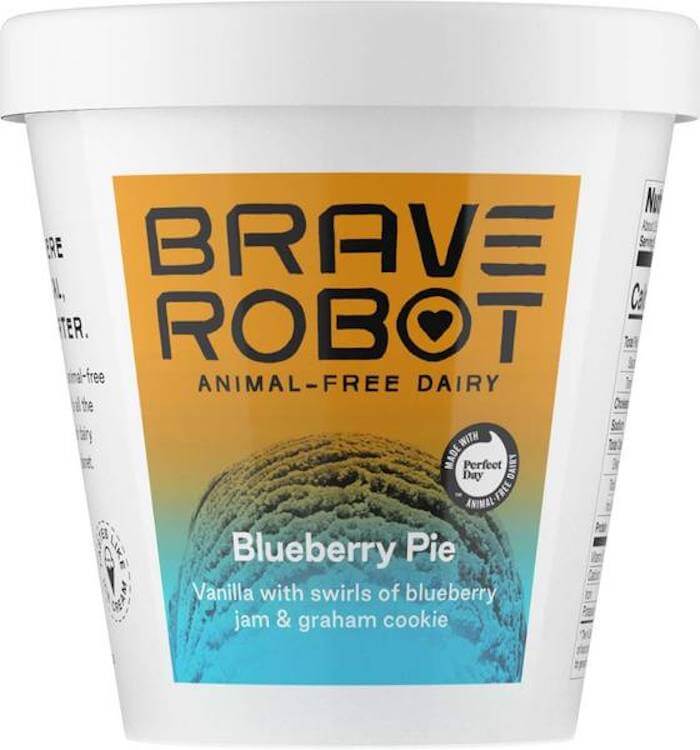 Knowing how well Brave Robot had mastered the other two flavors, I went into PB 'N Fudge very excited to see what this flavor would be all about. Though the container describes it as "vanilla with peanut butter swirl," I'm convinced that every tiny bite was packed with a subtly delicious peanutty flavor.

The fudge ribbons worked to make every bite with chocolate even more decadent. Though I could have done with more chocolate, the bits I did have with fudge were made more special because I knew they were limited. This did everything to soothe my Reese's craving, and I'm very thankful for that. 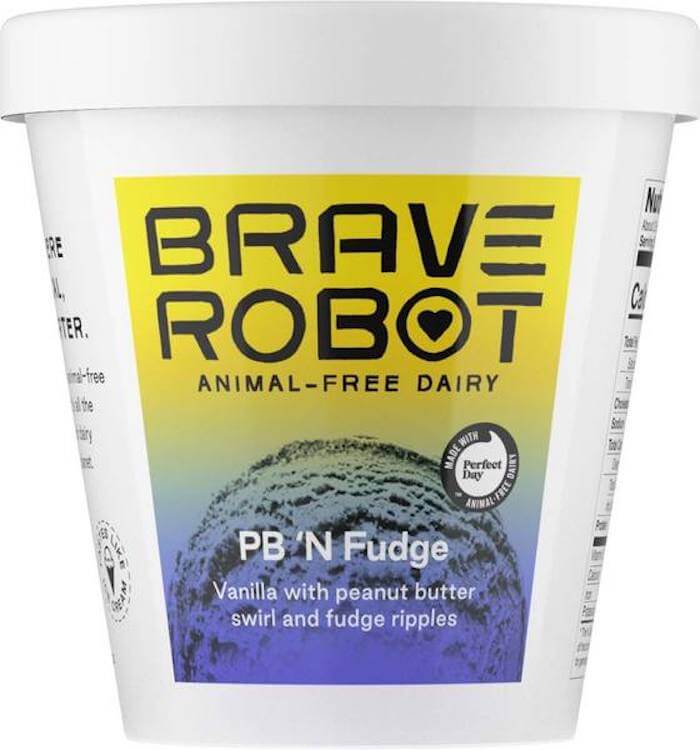 Last but not least, I dug into the Hazelnut Chocolate Chunk, fully expecting it to be like a Nutella ice cream with chocolate bits, and being surprised when it wasn't. This ice cream made me realize that I don't think I've ever had anything hazelnut-flavored without the addition of chocolate, which made this experience unique.

And that hazelnut ice cream was good. Hazelnut has such a rich, toasty nut flavor that it's a shame it rarely gets the chance to shine on its own, and it absolutely does here, with thin chocolate slivers accentuating that essence without drowning it out. I shared it with someone who hates nuts, and even he couldn't stop eating this delicious flavor. 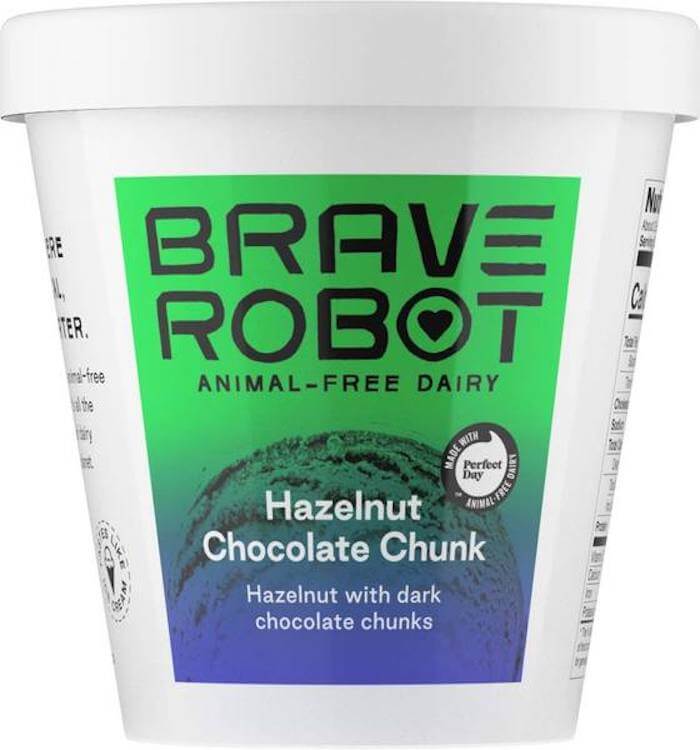 If you're vegan, or just like to go plant-based a couple of times a week, Brave Robot is a must-try. In terms of flavor, texture and consistency, it has everything you could want out of ice cream. In fact, it's better than most ice creams I've tried.

And while the price is a bit high, especially with the shipping costs attached, it's not completely unheard of. I used to spend $7.50 a scoop at my local dessert place for nitrogen-frozen ice cream—and I might like Brave Robot even more. At my family's request, I'm very tempted to place another order soon, and then take my mask and a tub to the grocery store to beg them to stock Brave Robot.

You can also click HERE to find out if Brave Robot is stocked in stores near you.