If You Delight in Getting Stumped by Tricky Puzzles, You HAVE to Play Broken Age

If a game is on the Nintendo Switch, the chances I'll get around to playing it at least triple.

As much as I love some of the console exclusives, I've mostly been using it to play games that have been around for a while and have awesome reputations but are tougher to commit to if you can only play on the TV.

That's especially true of the point-and-click adventure Broken Age. I actually bought it last year for the PlayStation 4 on sale, but never got around to even starting it. So when the folks at developer Double Fine provided me with a review code for the game on the Nintendo Switch, I finally got to experience the adventure I'd been intending to for a long, long time.

Broken Age revolves around two teenagers whose lives couldn't be more unalike at the beginning of the story. Vella Tartine lives a quiet life in the baking town of Sugar Bunting until she's selected for the Maiden's Feast. During this event, young women from all the villages are chosen to be sacrificed to the beastly Mog Chothra. By being eaten, they can appease the horrible creature and prevent the destruction of their hometowns. While her family sees the feast as an honor, feisty Vella plans to stop Mog Chothra once and for all by slaying it. 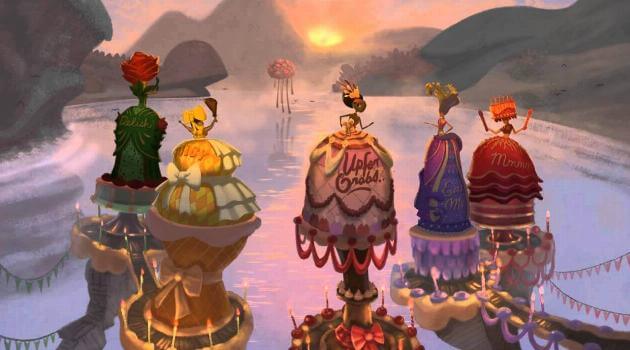 Meanwhile, Shay Volta lives an all-too-cushy life aboard a ship hurtling through space. Overseen by computerized faces in orbs that call themselves Shay's mom and dad, he goes on daily "missions," which consist of Shay saving knitted creatures from manufactured peril. In one scenario, he must eat a pile of ice cream to rescue them from an "avalanche." In another, he has to survive a cuddle fight with the yarn critters. He's growing up, and the same old tests of courage are wearing on him day after day—until the player takes hands and decides to help Shay inject a little danger into his life. 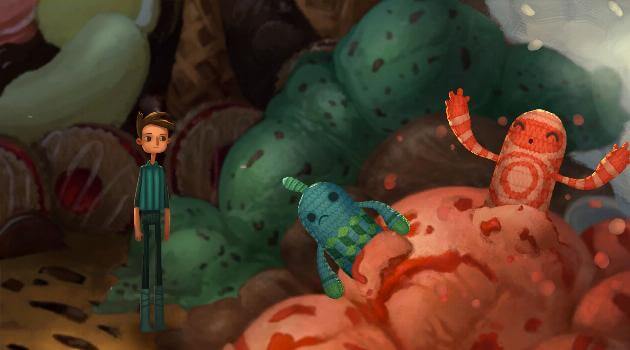 These stories unfold in a beautifully animated point-and-click adventure game, complete with phenomenal voice acting by a cast featuring stars including Elijah Wood and Jack Black. Vella and Shay's stories are told in parallel, and at any point, you can swap between the two intricate narratives and unfold a bit more of each story.

To interact with the world around you, you simply move the cursor to highlightable objects and press a button. On the Nintendo Switch, one control stick snaps to the next interactive object, while the other lets you scan the screen for interesting objects. In handheld mode, you can also activate them with a simple touch of a finger.

Besides walking around, this is your main means of moving forward in the game. You can analyze the landscape for clues, and potentially pick up useful items, as well as chat with people who might have useful information. Any objects you pick up are added to your inventory, and are also critical to your progress.

Most of the game is about identifying what needs to happen next and using all of the tools at your disposal to move toward a solution. Looking for a missing knife? Think about who might be hiding it, and figure out what might trick them into bringing it out. Stuck in a repetitive cycle? Keep your eye out for any way to deviate from the plan, and exploit it.

And since you can play Vella or Shay's story whenever you like, you can simply change to the other character when you're feeling stumped. Most of the time when I returned to the tricky section after playing as the other character for a bit, I did so with a fresh perspective and found it a lot easier to find a solution. This often came as a direct result of the other character's gameplay. When Vella's next objective just wasn't clicking for me, I played as Shay and discovered I could combine items in my inventory, resolving my Vella problem. 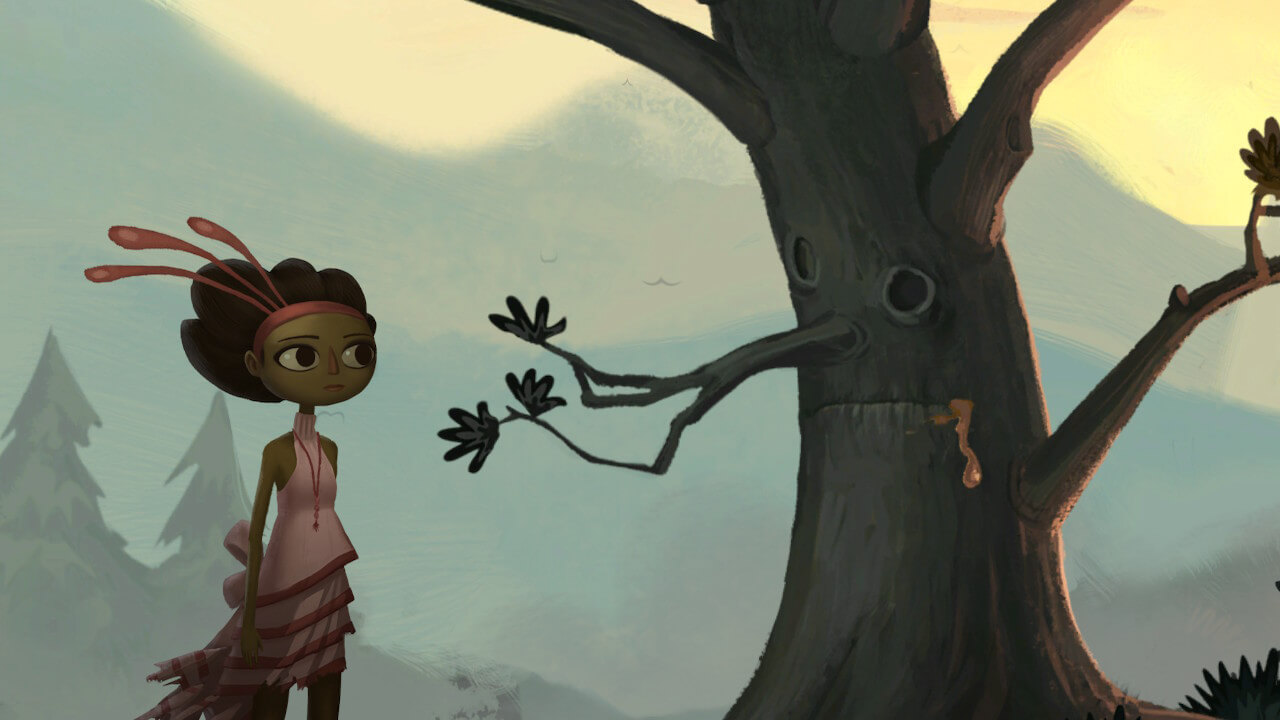 But the game really opens up when Vella and Shay's paths collide in the second half of Broken Age. Both characters discover that their realities weren't what they thought they were as they swap locations. Though they still must find solutions without the chance to collaborate, they're actually working in tandem toward the same goal. This also means you'll start utilizing clues from both paths to solve puzzles and beat the game.

Solutions won't necessarily come easily. The game requires playing close attention, learning the layout of each area, making logical connections and testing out every idea you have to make things work. According to the Nintendo Switch page for the game, one of the game's features is "one really hard puzzle that you won't get but you'll look it up online and not tell anybody." I found that to be totally accurate.

During my run of Broken Age, I turned to an online guide one time, and was glad I did. I knew which two components needed to go together, but they existed in totally different parts of the map and I had no idea how to fix it. In the end, I simply had to interact with one of them and sit around for a couple of minutes until it turned into an inventory item—but I never would have figured that out on my own.

While there's a logic to every puzzle you'll encounter in the game, finding the right solution is sometimes a result of trial and error.  Often, I even found answers when I was trying to accomplish something else entirely—but that's the magic of Broken Age.

Some of the best puzzles were enjoyable because they were tough. My favorites involved the complicated process of rewiring hexagonal robots to bring them to life and change their functions. I had to scan high and low for the guides to make them work, but when I found them I felt like I had really accomplished something—and the robots were ultra-cute, too. 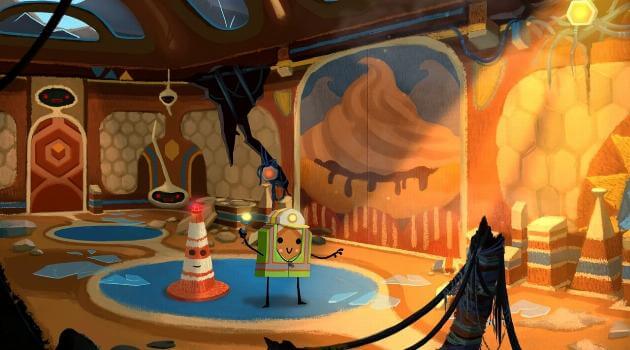 What's also special about the game is that different people will struggle with different puzzles. I remember seeing a YouTube video a couple of years ago about the hardest puzzles in gaming, which included a notorious Broken Age mystery involving knots. I was dreading my encounter with this supposedly cryptic conundrum, but managed to solve it after just a couple of attempts. 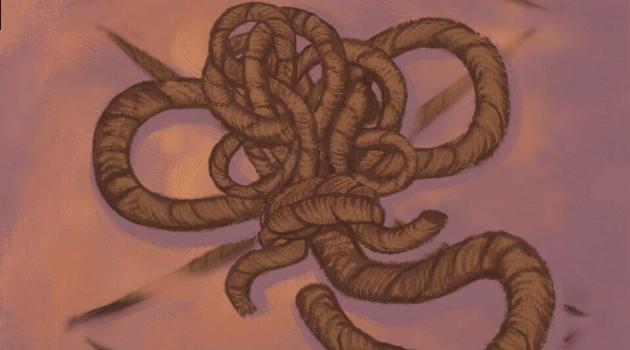 If you're struggling with the game, there are a few things you can do. First, turn on the subtitles, which can sometimes give away hints you wouldn't have noticed otherwise. Secondly, don't be afraid to get out a pen and paper and jot down notes or draw diagrams to help you. I also made good use of my phone to snap a photo of the screen when I thought something might come in handy later (which it often did). 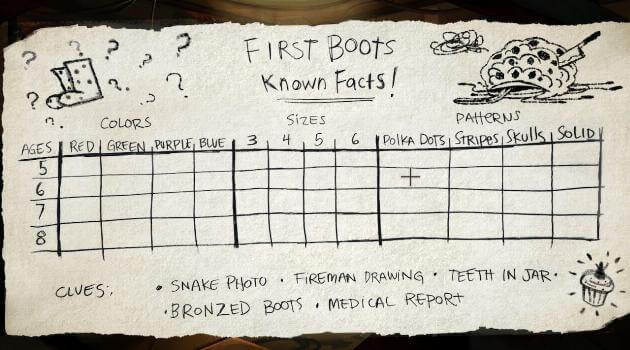 Broken Age took me about 12 hours to complete, but you might beat if faster or slower depending on your puzzle-solving abilities. I found it way less cryptic than other point-and-click adventures I've played in the past, and though I'm typically horrible with maps and area layouts, I found the locations in the game intuitive and easy to memorize. It helps that they look amazing and are often populated by memorable characters. 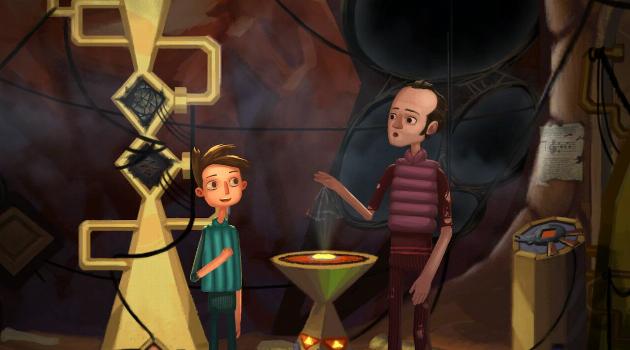 But like any game in the genre, there will probably be times when you're a couple of steps ahead and things that seem logical just don't work out the way you think they should. I found that if I stuck with it and thought things out, these moments typically resolved themselves.

Some people will probably find these puzzles completely infuriating and convoluted.  They can sometimes feel like a series of fetch quests with puzzles added in.

Still, with each new discovery you unlock more of an ingeniously crafted story. As I found out more about what was really going on, I found it totally worth the frustration and retreading of corridors again and again in search of an answer. Some of the hints are incredibly subtle, but that made finding the solutions on my own that much more satisfying, and the story of growing up and carving your own path will resonate with most players.

In addition to the Nintendo Switch, Broken Age is also available on Steam, iOS and Android, PlayStation 4, PlayStation Vita and Xbox One for $14.99.

Don't have 12 hours to solve tricky puzzles? Click HERE for our favorite games that can be completed in a single sitting.