I was a huge fan of the beautifully illustrated Back to the Future picture book from Pop Classics, so when Quirk Books offered to send me their upcoming take on Buffy the Vampire Slayer, I was eager to give it a read. 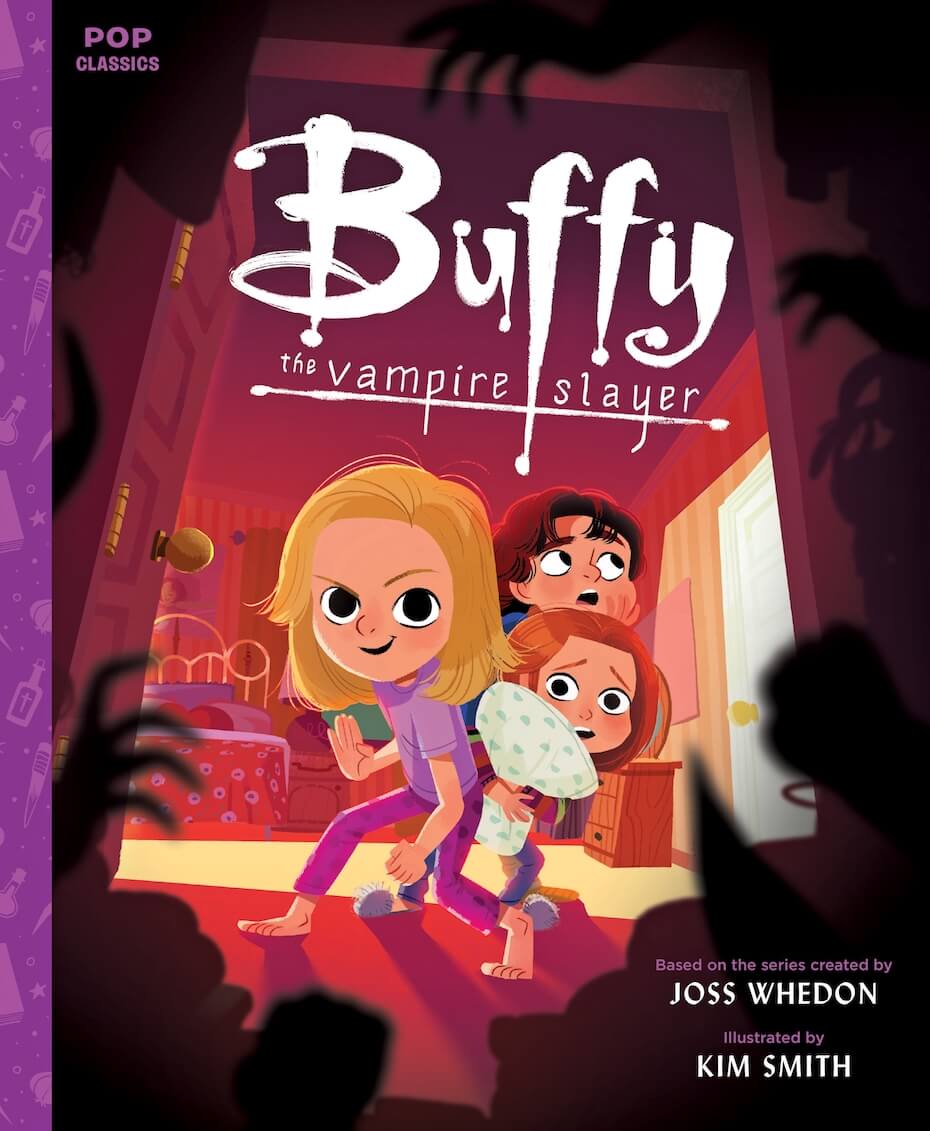 (Buffy the Vampire Slayer: A Picture Book via Quirk Books)

Buffy the Vampire Slayer: A Picture Book is also wonderfully drawn by Kim Smith, but this time it's not just retelling the story it's based on. The narrative in this book is brand new, focusing on Buffy as an 8-year-old, and it's a delight.

The story is actually told in a flashback from the perspective of a teenaged Buffy. She's now a fearless, butt-kicking vampire slayer who can take on any adversary, but she wasn't always so brave. In fact, when she was 8, she was scared of the dark because she was sure there was a monster in her closet.

Terrified, she plans an emergency sleepover with her besties Willow and Xander. Their company makes her feel better about the situation, but when it's time for lights out, they also hear the haunting noises. Too scared to open the closet door, they turn to Giles, the very knowledgeable school librarian, for a bit of guidance.

His advice is pretty simple. He tells Buffy that, since she's a slayer, she already has what it takes to confront whatever's behind that door. Even if she hasn't yet learned how to fight, her courage in the face of a monster will show it that she means business.

That night, they have another sleepover. Even as they play board games and make pillow forts, there's an undercurrent of fear as the hour for bed draws closer. Finally, Buffy works up the courage to open the closet door—and I don't want to reveal what they find inside, but it does promote an awesome message about kindness and acceptance.

This isn't your typical Buffy the Vampire story, but it still feels faithful to what the show was all about. If you're looking to be thoroughly creeped out, this isn't going to do that for you. Still, it's all about how much we can grow when we confront the things we're most scared of, and how usually those things weren't as scary as we thought they'd be.

Aside from that core message, the story is a lot of fun, too. At first, I was a teensy bit annoyed with some of the departures from the original Buffy story (Buffy doesn't meet Willow and Xander until high school! Her slayer powers aren't active until she turns 15!), but I was just being super nit-picky, as I was quickly won over by the charm of the writing and the awesome illustrations. Kim Smith's drawings have a distinctive style that imbues life into every single page, and it even comes with handy pronunciation help for Xander and Giles' names—which in retrospect are pretty weird.

If you're a Buffy fan, or even want to know more about the vampire slayer, I absolutely recommend this sweet little book. It's simple and straightforward, and it really manages to get its message across. It's even making me feel inspired to take on the next thing that frightens me.

The book comes out on Sept. 4, so keep an eye out for it.

Need more classics in your life? Click HERE for all the teen dramas you have to binge-watch.