When I first heard that Burger King used science to concoct a cheeseburger specifically designed to give people nightmares, I knew I had to give it a shot.

As soon as my local BK had the new Nightmare King burger in stock, I took a trip to the drive-thru and made my daring purchase. It was time to see if a cheeseburger could really induce bad dreams.

For reasons I can't quite place, Burger King collaborated with sleep experts Paramount Trials and Florida Sleep & Neuro Diagnostic Services, Inc. and Goldforest Inc. to scientifically formulate a burger that could make people have nightmares. It appears they were successful at the end of their trials because, according to their research, the meaty monster of a burger increased the chance of having a nightmare by three and a half times when it was consumed it before bed.

Apparently, this is achieved through a combination of different proteins and cheese, which can interrupt REM sleep and throw dreams off-kilter. That's achieved with three different meats from three totally different animals. 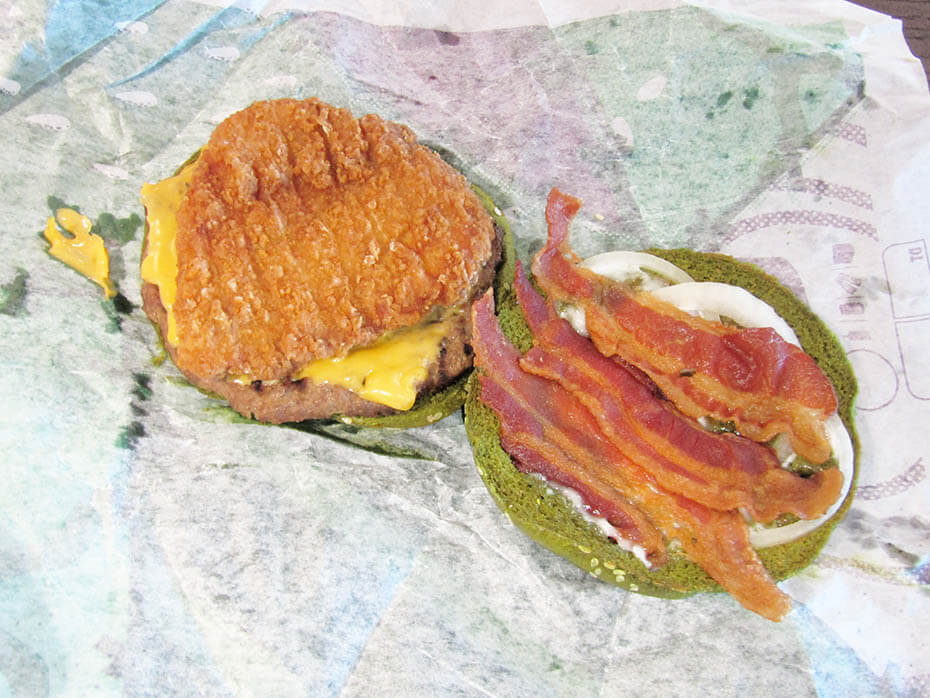 The Nightmare King's proteins come in the form a grilled beef hamburger patty, plus a crispy fried chicken fillet, plus bacon. They're all thrown together on a sesame seed-topped vibrant green bun (dyed with coloring derived from watermelons), with mayo and onions and topped with American cheese. The look alone might give some people nightmares, but I was eager to dig in. 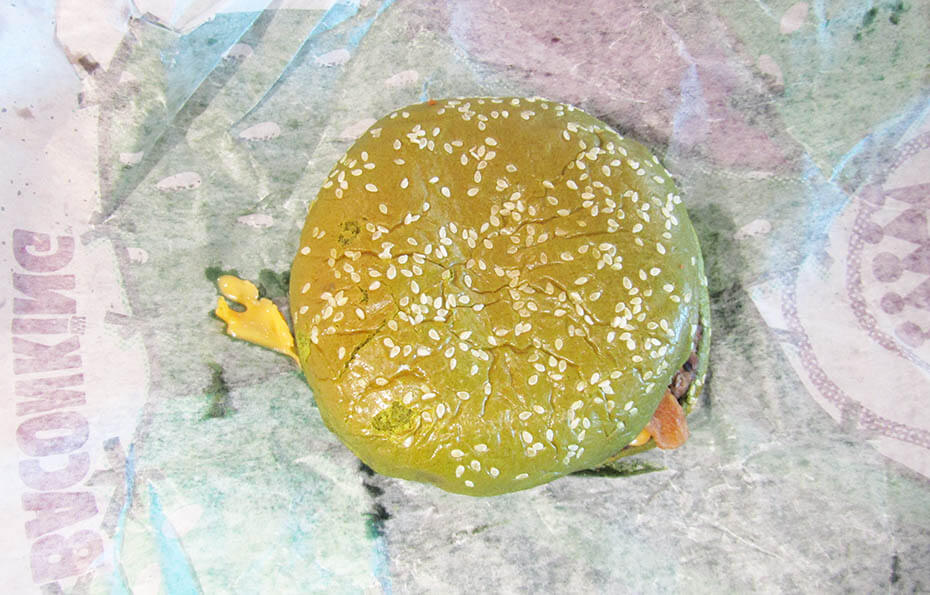 When I pulled the Nightmare King out of its bag, I found it wrapped in a sheet of burger paper, which I found interesting because sometimes their bigger sandwiches come in boxes instead. The paper itself had a  Frankenstein's monster-patterned green and purple print, and though the label read "Bacon King," an N had been written on it to indicate it was actually a Nightmare King. Grease was already seeping through the bottom of the wrapper, so I eventually had to place it on some napkins in order to avoid a mess. 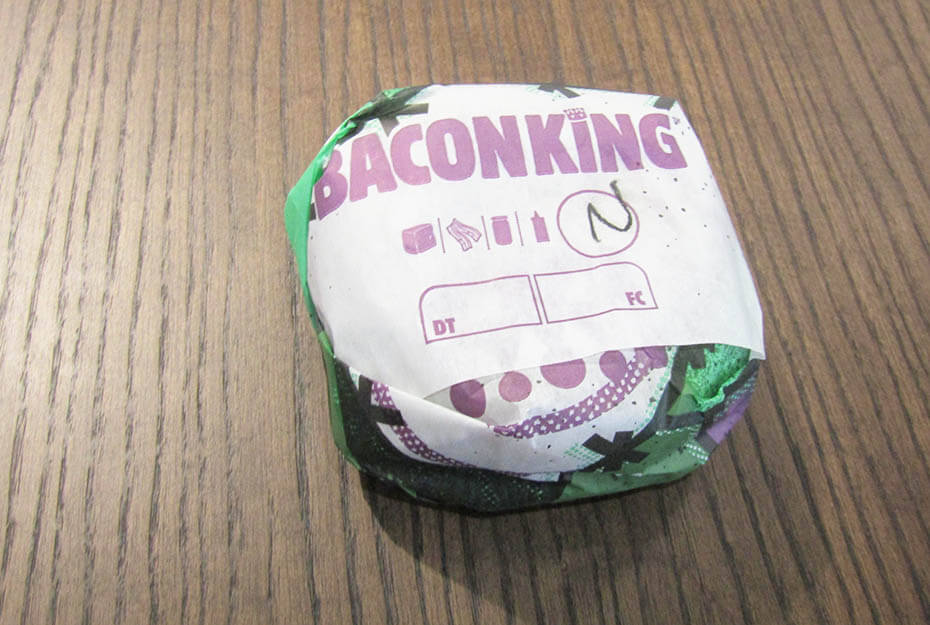 When I opened it up, I wasn't too frightened by the look of it. The bright green bun was strange, but not off-putting, and at first the fried chicken layer looked like onion rings to me. I'm not at all afraid of western-style burgers, so the appearance actually put me at ease. 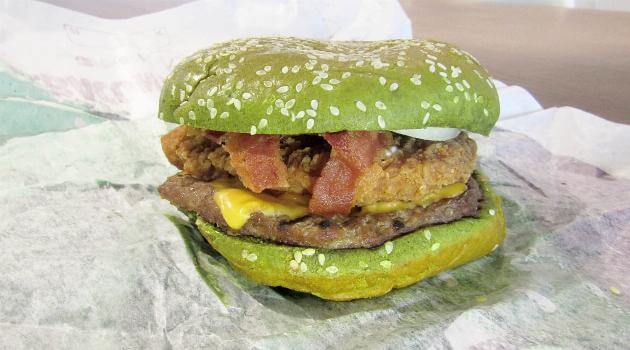 Then, it was time to take my first bite. It actually tasted pretty good, but it was a lot to take in. A quarter-pound patty can be filling enough without a giant hunk of fried chicken piled on it. But together the combination of beef, chicken, bacon and cheese were quite palatable. However, the bun did feel a little bit too squishy, particularly on the bottom. I'm not sure if this bun is softer than other Burger King buns due to the coloring, or if it had just soaked up three proteins' worth of grease and become soggy. 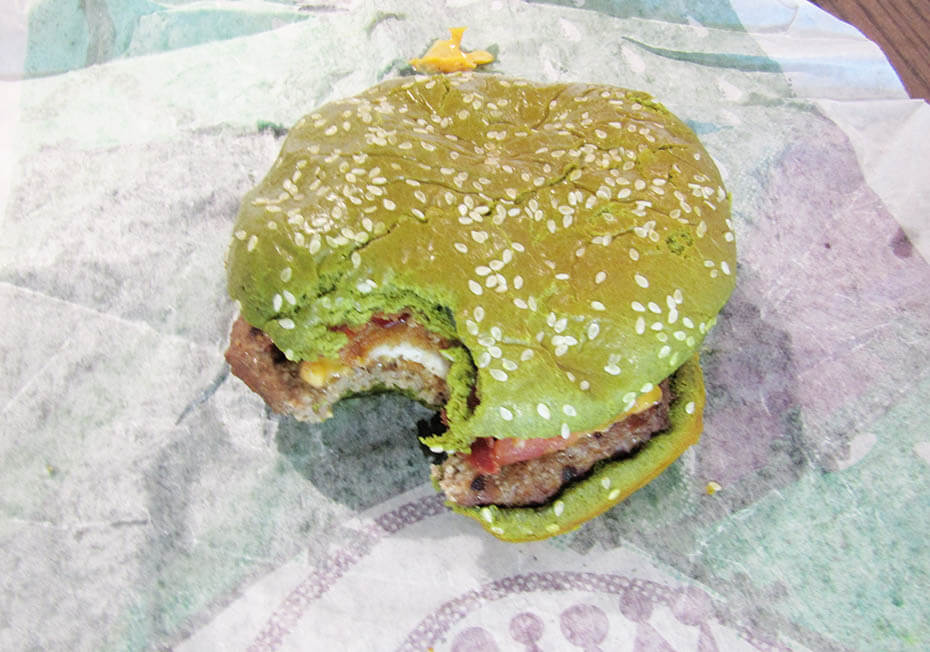 I decided that the only way I'd ever be able to finish the whole cheeseburger would be to take a grazing approach, and starting at about 1:40 in the afternoon I took slow bite after bite until it was gone a couple of hours later.

Admittedly, 1:40 p.m. isn't "right before bed," but I think that finishing it closer to 4 p.m., thanks to my delayed eating method, did get the timing a little bit closer to it. Around 7 p.m. I had another meal (conchiglie pasta with marinara, bell peppers and chicken), and after about an hour of reading, I settled into bed for sleep at about 10:30. I did what I could to not anticipate terrible dreams, but thanks to the distance between the Nightmare King and my actual bedtime, I wasn't as worried as I might have been otherwise.

That night I had a difficult time finding sleep, and when I finally did doze off, I wasn't asleep for too long. I had a series of strange, very vivid dreams and woke up numerous times throughout the night. At this point, I've forgotten most of these fleeting dream memories, but I do remember that in one dream, comedian Rodney Dangerfield was giving a rousing speech in a park, and that in another I was Jodie Whittaker's 13th Doctor from Doctor Who, and that two competing waiters were aggressively trying to get me to order from their menus.

The experience was certainly bizarre, but nothing even close to anything bordering on nightmare territory. While my dreams weren't horrible, perhaps my REM sleep had been tampered with after all.

While the Nightmare King didn't technically give me a nightmare, I consider that a good thing. If you're curious to try its strange green bun and pile of various meats, I also recommend that you also have it for lunch in order to lessen your chance of having nasty dreams.

I thought the flavors worked well together, but attempting to eat the whole thing in one sitting isn't for the faint of heart due to its massive size. Though the bottom bun was a little soggy, it didn't ruin the experience overall, and if I had to have it again, I might cut it in half and see if someone would be willing to share with me.

And though the recommended price on Burger King's press release is $6.39, my local BK had it on the menu for a lofty $7.49. After taxes, it was more than $8, which does make sense if you consider the ingredients, but still felt like a lot for a fast food burger. Still, the price discouraged me from also ordering a drink and fries, which was a blessing in disguise since having those would have prevented me from ever finishing the Nightmare King.

And if you're bold enough to try the Nightmare King, call up your local Burger King to confirm that they have it before you stop by, as they're not available at all locations. I never saw it on a menu, either, so don't be afraid to ask if you can't find it.

Does the look of the Nightmare King make your mouth water? Click HERE for Instagram captions that are perfect for anyone who's always hungry.