Cadence of Hyrule Doesn't FORCE You to Play to the Beat, But It's More Fun When You Do

If you put Cadence of Hyrule: Crypt of the Necrodancer in front of me without any context, I wouldn't have a clue that it wasn't made by Nintendo.

At first glance, it looks just like a retro Zelda title, but Brace Yourself Games' introduction of a special rhythm mechanic revitalizes something so familiar to make it feel fresh and really hard to put down. When Nintendo gave me a review code for the game, I booted it up the second I got home and was immediately hooked.

Cadence of Hyrule begins when an evil musician called Octavo uses his magic lute to put the king of Hyrule to sleep. With the Triforce unguarded, he then uses its power to transform his instrument into the Golden Lute, which has the ability to control all of Hyrule's monsters. When he also puts Link and Zelda into a magic slumber, Hyrule doesn't stand much of a chance. However, at just the right moment, the Triforce itself opens a portal to another world, summoning the hero Cadence, who has some experience dealing with rhythmic foes. 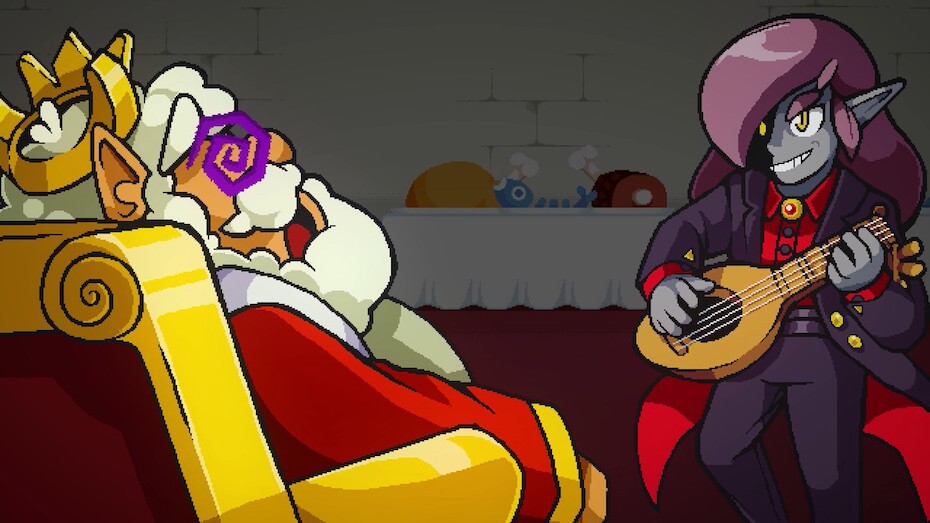 As the game opens, you take control of Cadence and go through a brief tutorial from a fairy called Trill. Here, you get introduced to the basic mechanics, learning how to navigate the world and how to move along to the beat of the world when enemies are around. The bottom of the screen shows a meter that helps you move along to the beat.

Throughout the game, every step you take, shield you raise, spell you cast or weapon you thrust is timed to the games internal rhythm, as long as you're somewhere with baddies. Once you've defeated all of the enemies in an area, the music becomes more peaceful and you're no longer tied to the beat, allowing you to move freely. 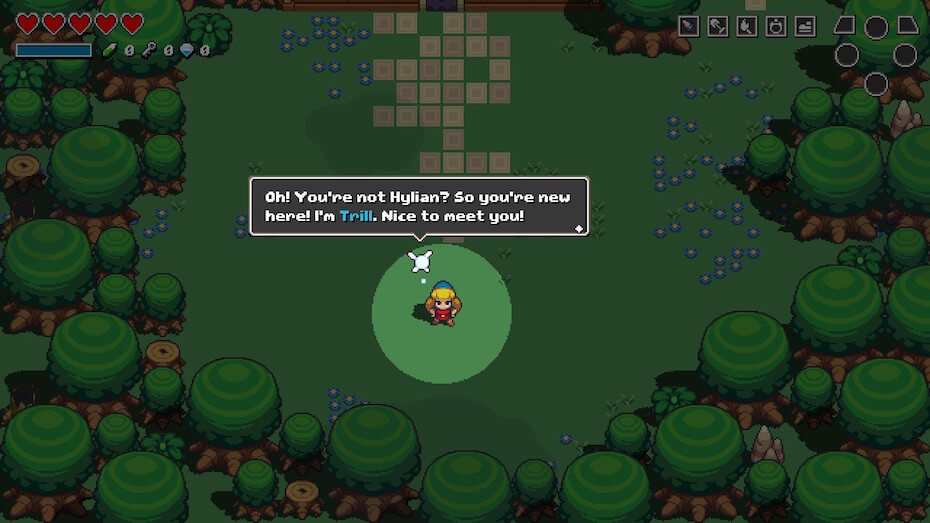 However, it's not long before the tutorial is over and you're tasked with choosing between visiting a sleeping Link or Zelda. After Cadence wakes your choice with the remaining power of the Triforce, you then play as that character until you progress enough to unlock the others.

This is actually an important choice, because although Zelda and Link move just like Cadence, they have their own unique skills and strengths. Zelda is a magic-user who can perform a magical block and later cast fireballs, while Link has a shield and can wield some incredible weapons—especially later in the game. Cadence is also an unlockable character, and while she handles more closely to link, she has a couple of tricks of her own.

Regardless of your choice, your main goal is to explore the world in order to find and defeat Octavo's four champions in order to stop him and restore peace to Hyrule. Each one happens to be a classic Zelda boss but updated with a musical twist. But while you could spend the entire game rushing to the game's four dungeons and immediately slaying these beasts, you'll probably want to take your time, investigating every part of the world in order to find goodies that will make your battles easier to win. 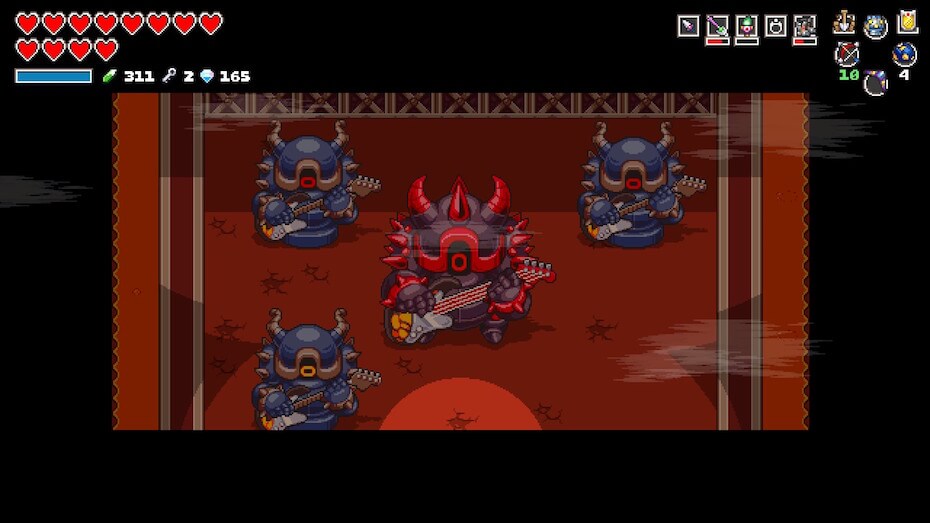 One of the reasons Cadence of Hyrule feels so much like a classic Zelda game is because the language between the two is so consistent. The character sprites are gorgeously detailed, but not carbon copies of anything from existing Zelda games, so they feel fresh yet familiar. The world is littered with caves and underground passages that serve as mini-dungeons, each with their own enemies and puzzles to overcome in order to obtain precious items. 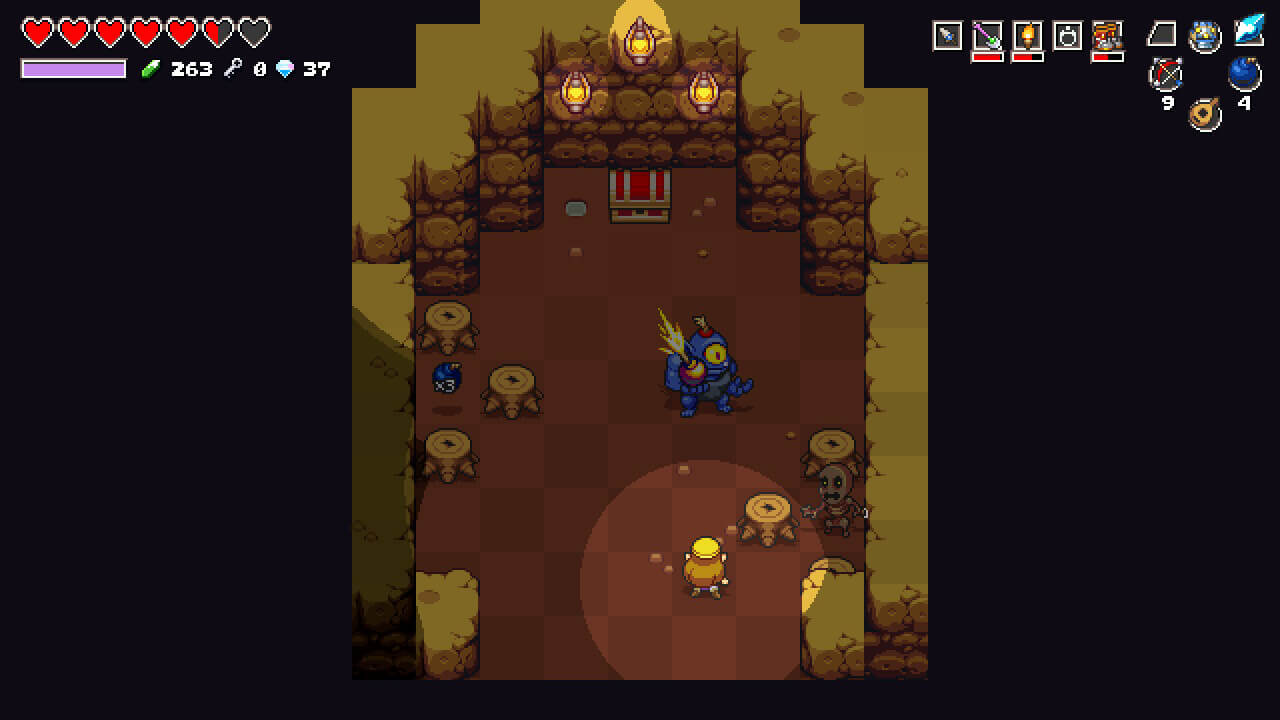 Fans of the series will recognize items like Bombchus, the Hookshot, the Cane of Samaria and the Deku Leaf, which all operate much like they do in their other Zelda games. However, this game also introduces a number of new music-based items, such as a War Drum that lets you skip a beat to power up your next attack, or a Lute that transports you about the world.

Understanding the different types of weapons in Cadence of Hyrule is also key to success. While the default weapons attack enemies directly ahead, a spear can hit enemies two tiles in front of you and a broadsword can hit three enemies in the three horizontal tiles in front of you, and even strike around corners. As you find more weapons and unlock upgrades, you may find yourself sticking to one that suits your style, or frequently swapping between different attacks to suit every new situation.

The game also heavily features temporary items that get worn down with use. Shovels are great for digging through earth (which is very common in Cadence of Hyrule) while torches help to light up dark dungeons. Both of these items come in a few varieties with their own unique adaptations and buffs. There are also wearable rings and boots, which do everything from upping your defense to increasing your attack power or helping you float across gaps.

These breakable items are also lost if you happen to die, along with any Rupees you've collected along the way. There are also powerful glass weapons that shatter if you're struck by an enemy. When any of these are in your possession, it creates a massive incentive to avoid harm and survive. There's nothing worse than losing more than a thousand Rupees because you're being overconfident about your abilities since they're so valuable when you stumble upon certain items in in-game shops.

However, any diamonds you collect in the game are never lost. Any time you day, you start in a shop where you can spend them. While I preferred to spend my diamonds on items I couldn't lose, such as heart pieces and new weapons, I can see how certain temporarily items would come in handy if you were really struggling with a particular part of the game.

And if you're struggling at the beginning of Cadence of Hyrule, take heart in knowing that the game typically gets easier as you progress. Early on, having very few hearts resulted in a lot of deaths for me, but as I built up my health and started getting bottles and filling them with healing red potion, it became easier and easier to survive longer. And when things were getting really dire, I could simply use the lute to transport to safety and start fresh on the challenge. In the beginning, the map is massive and it's quite overwhelming, but as you play and begin to unlock all of the game's secrets, it feels like you're mastering the world, and that feels really good. 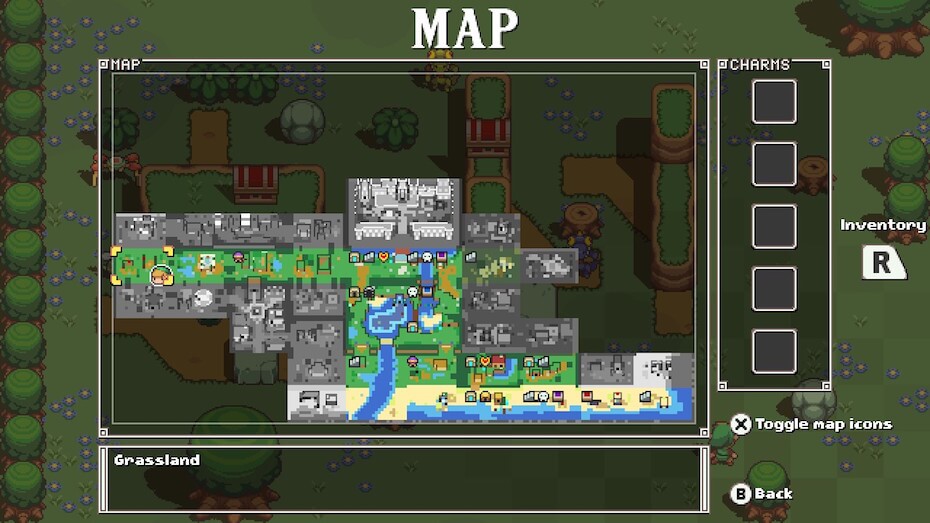 While being forced to stick to a beat may sound like it'd leave you at a disadvantage, the enemies also play by the same rules, so it's actually extremely helpful. It makes their behavior predictable and gives you the opportunity to take out a whole screen of bad guys without a single hit. Yes, there are actual puzzle rooms in the game, but the unique mechanics make every room of enemies feel like another brilliant puzzle to be solved with as few mistakes as possible.

For example, Bokoblins move every other beat and raise their hands before they move so you know exactly when to strike. Puffstools are immobile, but spew a cloud of poison every few beats. Lizalfos only move when you step into their view, and then pursue in a line one tile per beat. By paying attention and learning the patterns of all of the enemies throughout the game, you can figure out the best way to avoid as well as attack them. The longer you can keep with it, the more damage you'll deal, and the better rewards you'll get from fallen enemies. 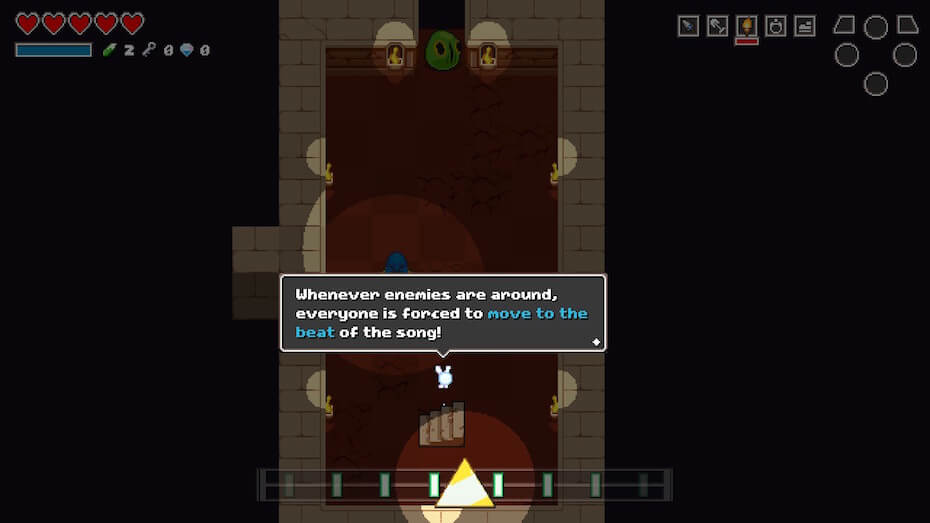 Or not! I happen to have zero rhythm, and the first time I played the game, I missed so many beats that it recommended I play it Fixed Beat Mode. This is essentially the game's easy option, allowing players to play without moving along to the fixed beat, with enemies only taking their next actions for every move you make. This gave me a lot of time to think my actions through and familiarize myself with the world. 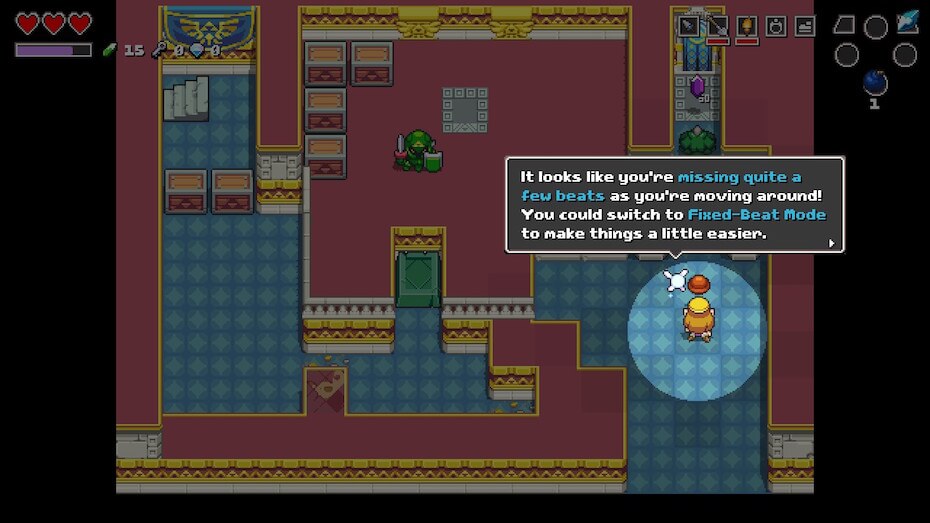 While you might think this would defeat the purpose of the whole game, the rest of the game is so perfectly balanced that it's excellent even without this core mechanic. Then, when I did beat the game for the first time (it took a little under 12 hours), I was more than ready to jump back in and give the real deal a shot. My second playthrough with the beat on is now going much better, and I'm having even more fun than I did the first time through.

I didn't realize until my second run-through that though parts of the overworld map are the same every time you start a new game, other elements are randomized, so I couldn't rely on just my memory to play it through this time. This randomness also meant that my second run felt entirely different because I had different items on hand, forcing me to tackle things from different perspectives and in different orders.

The game also gives you a lot of playability options. You can play the full story mode, or play a version where you complete the entire adventure as only Cadence, Zelda or Link. There's also a Permadeath mode, where one game over means you are done, turning it in an epic roguelike. I'm not even close to skilled enough to make that work.

Regardless of how you play, this is a game that must be played with the sound on, ideally with headphones in. The game's music consists of rock remixes of iconic tracks from other Zelda titles—primarily A Link to the Past and Ocarina of Time if my ears serve me correctly—but the beat of every song drives the gameplay. I live in L.A., so there were pesky moments when a helicopter flew overhead or a nearby car alarm went off and not being able to hear the music completely threw me off, causing me to miss beats and lose my progress.

Everything about the game makes it an instant classic, and even if you don't know anything about Zelda games, it could be a great entry point into the series. Now that I'm nearing the end of my second run, I'm very tempted to buy the original Crypt of the Necrodancer. I'm crossing my fingers it'll be just as much of a blast.

It's available on the Nintendo Switch eShop for $24.99.

Not sure if this could be your fave Zelda title on the Switch? Click HERE to find out which Breath of the Wild champion you are.