Card Shark Is a Game About Cheating at Cards, and It's a Blast From Start to Finish

I'm a longtime fan of indie game publisher Devolver Digital, and when I first saw their names attached to Card Shark in a Nintendo Indie World showcase back in 2020, I knew the game would be right up my alley.

The trailer featured a lush animation style, orchestral 18-century-inspired music and lots of cheating at cards, and promised to be a game quite unlike any other.

And now that the game is finally out on Steam and Nintendo Switch, I can say it's lived up to all of my expectations—and then some. The folks at Devolver were kind enough to send me a review key for the Nintendo Switch to check it out before its release, and after happily blasting through it in about five hours, I can say it's truly original, and one of the freshest titles I've played this year.

Card Shark takes place in pre-revolution France, under the rule of Louis XV. You play as a young man, a mute peasant who works in a tavern. One day, a man called the Comte de Sainte-Germain comes in for a game of cards and asks you to help him cheat. You play along, peeking at his opponent's cards while you pour the wine, and then wiping down the table with a cloth to signal the best suit in his hand. 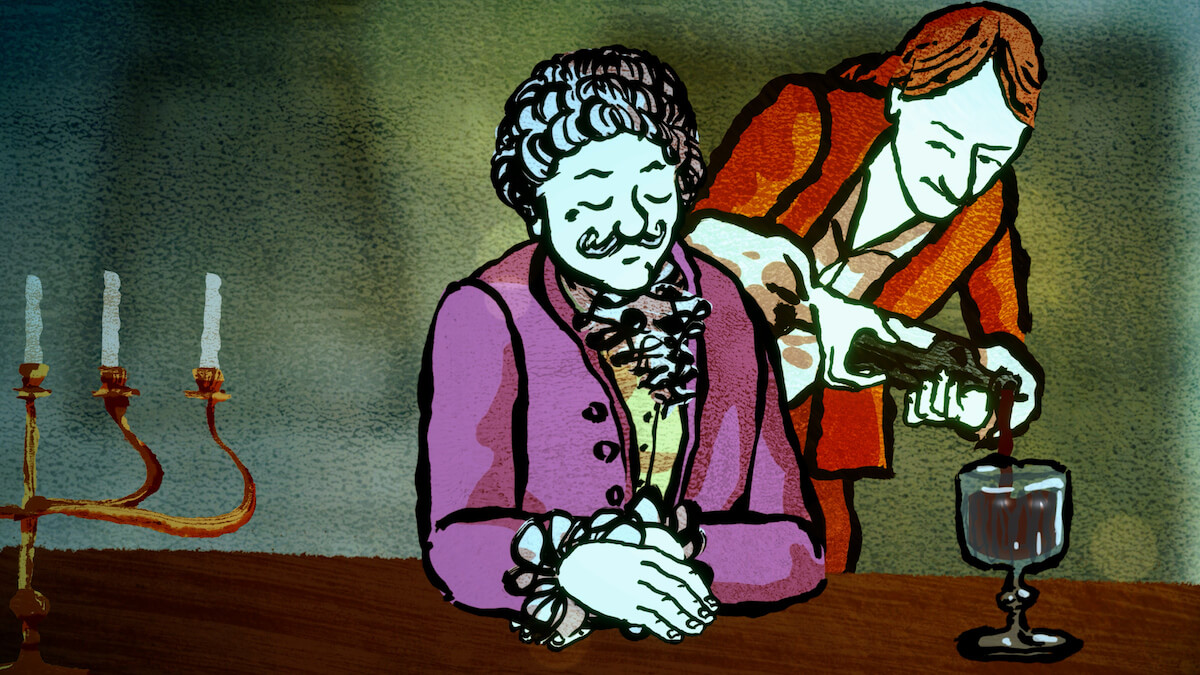 Through no fault of your own, your cheating is found out. A scuffle ensues, and when the owner of the tavern is killed in the crossfire, her murder is pinned on you. The Comte aids you in your escape, and seeing your potential, takes you on as an apprentice, leading you on the path to becoming one of the most skilled cheats in France. 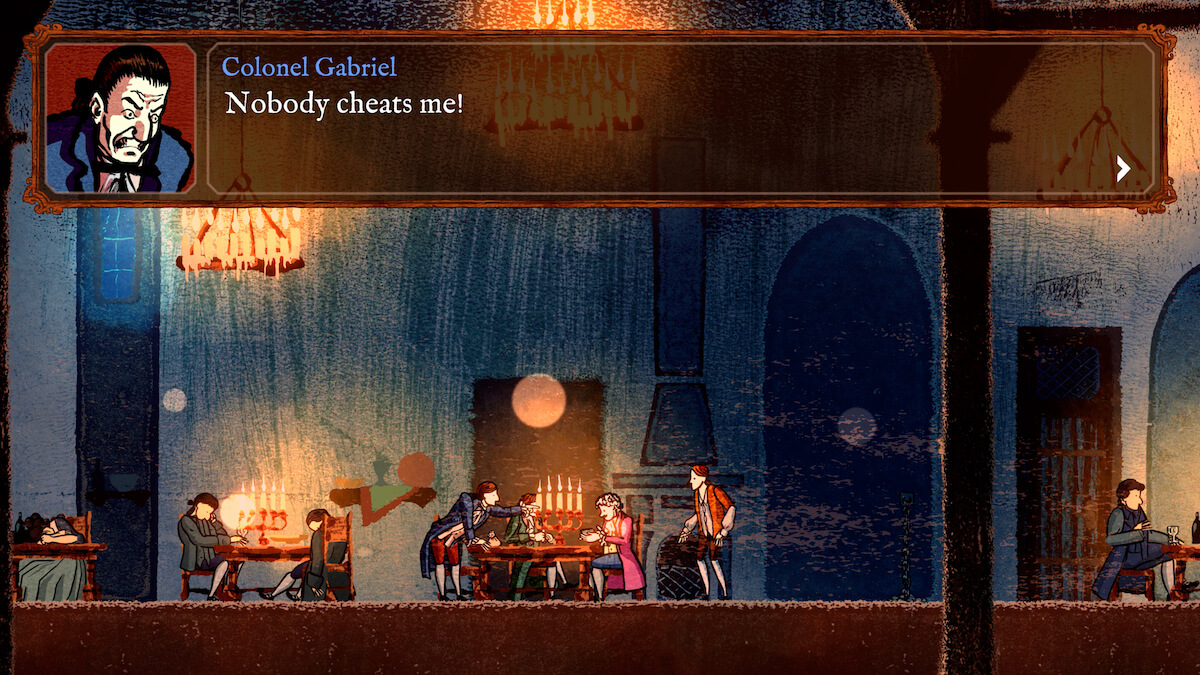 But the Comte wants you for more than just making money. He's also investigating a royal conspiracy called the Twelve Bottles of Milk, and its secrets just might change your life forever. As you travel across the country—and beyond—to get rich and learn more about these court secrets, you'll dupe French aristocrats and real figures from history, rising the ranks all the way to the top. All the while, it's clear there's unrest, with a massive divide growing even bigger between the peasants and the aristocracy, and that some big changes are on their way.

Also read about: Sumire Is a Heart-Wrenching Narrative Adventure—and Now You Can Play It on Your Phone

So what game are you playing in Card Shark? You never actually find out. That's because the substance of the card game itself doesn't matter. Instead, it's all about learning all kinds of sleight-of-hand tricks, employed by real card sharks, and setting up the Comte for success as often as possible. 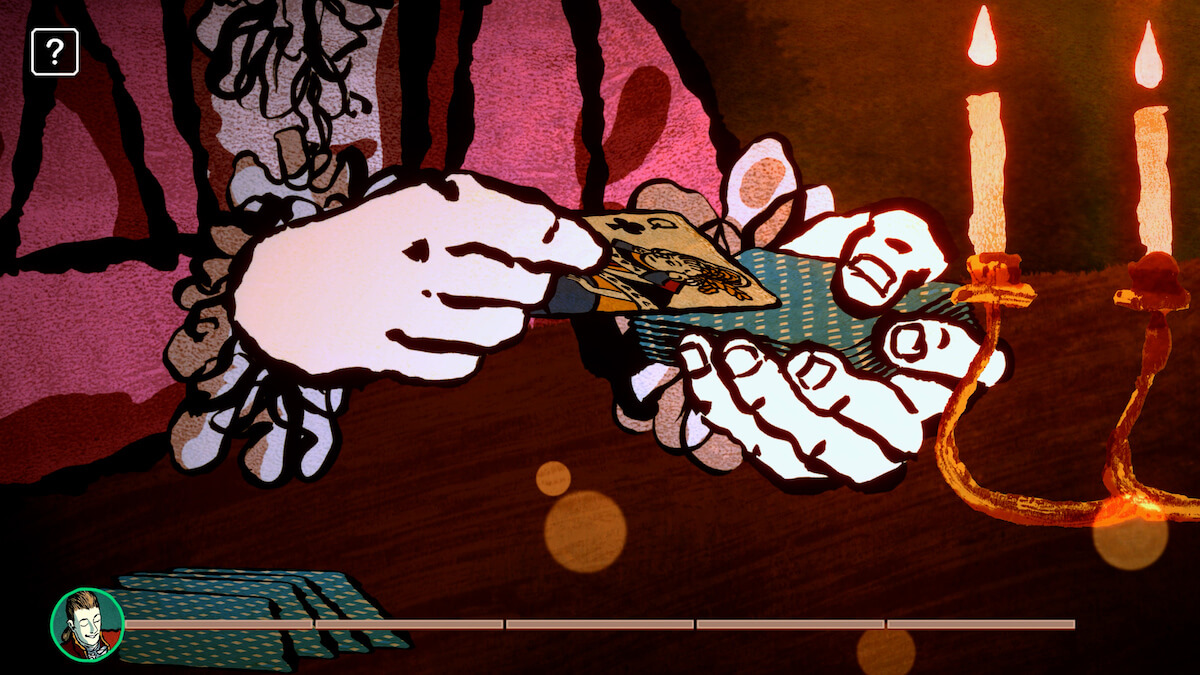 As you travel to each new destination, you'll learn a new cheating technique before each game. These build upon each other and grow more complex over time until games involve combining all of your know-how into one wild match to succeed.

This involves everything from simple tricks, like holding up a card with a certain number of fingers that may indicate a suit, or lifting a glass in a certain way to signify Jack, Queen, King or Ace, to much more complicated maneuvers, which play out in the form of mini-games.

Over the course of Card Shark, you'll be marking cards with makeup, swapping out decks, palming cards and even using reflective surfaces to glimpse at cards. You'll also learn techniques like false riffle shuffles, and complex maneuvers using tricks with injogging and outjogging cards to make them subtly protrude to mark important points in the deck. All of them come in handy at one point or another, and there are 28 tricks to learn in total—if you also count outside techniques like rigged coin tosses, dueling and card throwing. With all of them, practice makes perfect, and it's worth mastering each new trick before you move on. 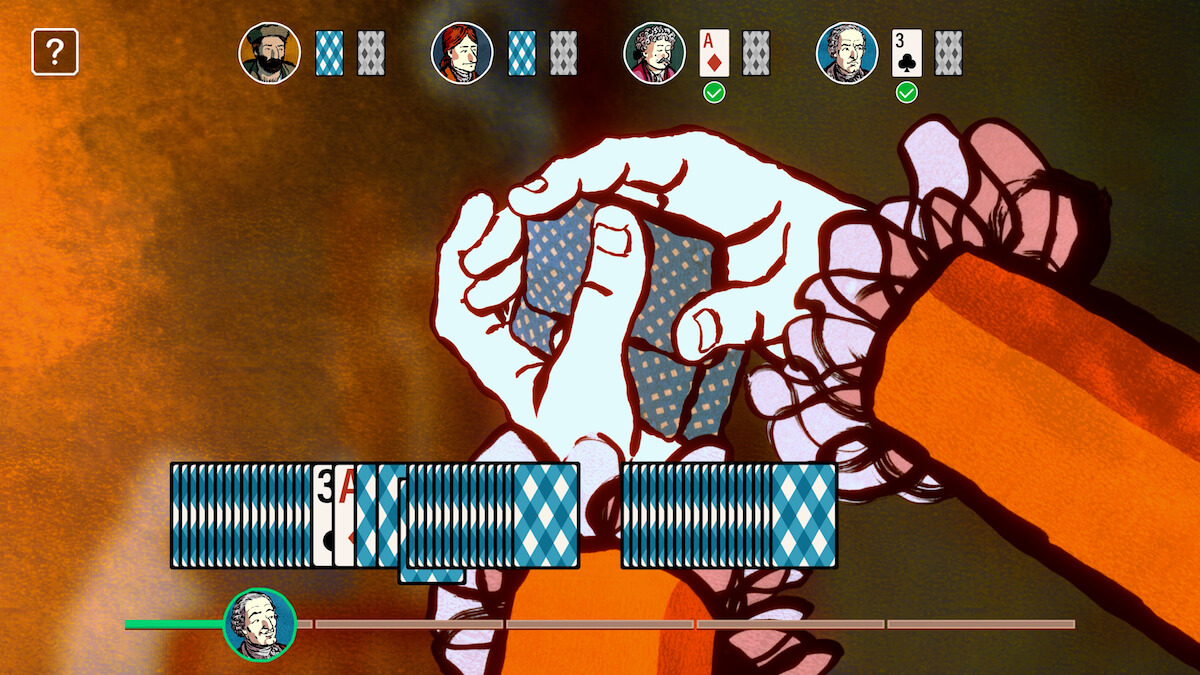 Also read about: How to Find and Save Every Waddle Dee in Kirby and the Forgotten Land

As the Comte brings you along on his journeys, meeting all kinds of colorful and often dubious characters, the pressure is on you to perform your tricks properly and not get found out. During your games, the time is always ticking, and the longer you take to pull off your moves, the more suspicious you'll appear. You can also draw attention to yourself with high bets, so in your quest for riches, it may be wise to be careful. You don't want to get caught, because that will mean getting thrown out of the game and losing your valuable earnings—or worse. 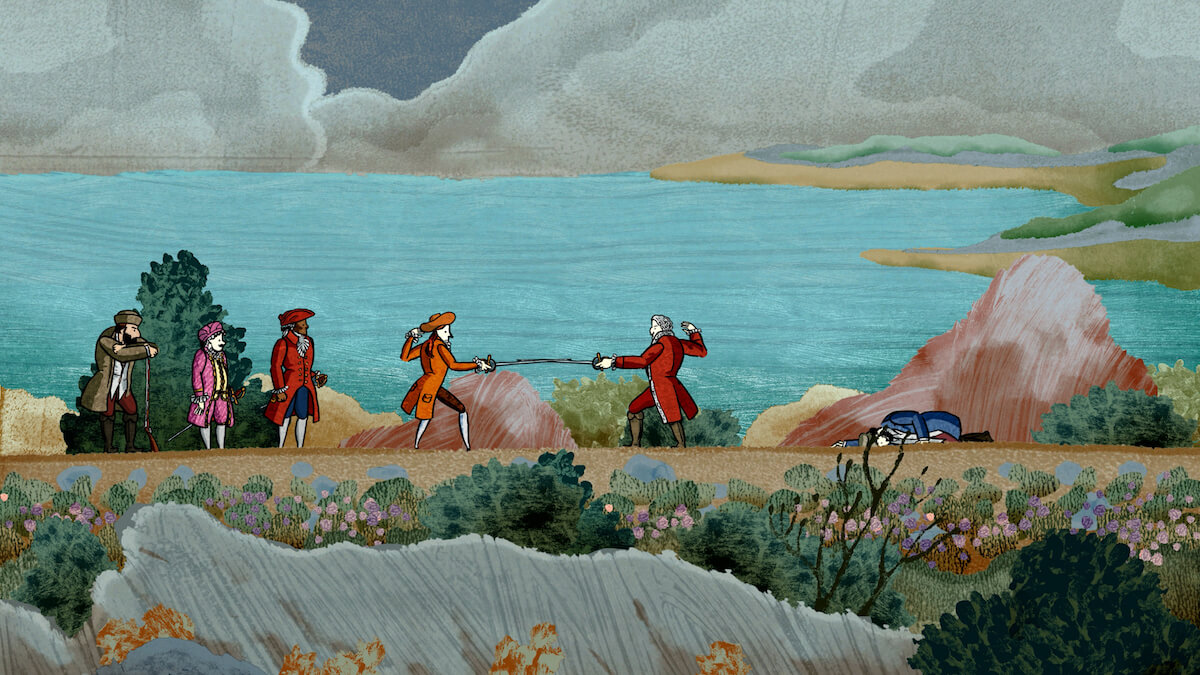 Speaking of your winnings, the money system in Card Shark is a little unusual. In the game, your home base area is a Romani camp, where you can learn some tricks, and also invest your money into the community. This seemed like a kind and noble thing to do, so I'd donate quite a bit of my cash at every opportunity, hoping this would lead to some big reward later. I didn't really see what the point was at all until I'd gotten myself into a situation where I didn't have the money to continue. They were more than happy to return some of the money to me to keep my games going, though I'm also guessing they would have funded me if I ran out entirely. This kind of makes it seem like the money doesn't matter, and that it's generally safest to not go for big bets because the only consequence of getting low on funds is inconvenience.

The good thing is that you don't have to be the fastest or cleverest person in real life to pull off the tricks and beat the game, thanks to its difficulty levels. You can play it on an easier setting in order to allow hints, as well as give you more time to successfully perform the needed tricks before the others get too suspicious. On the other hand, if you're feeling confident, you can turn it up to the hardest Con-Artist difficulty to really put your know-how to the test.

I'm not too proud to admit I needed the easier mode to complete the game. There was one sequence in which I wasn't triggering the suspicion meter, and yet whatever actions I took (or didn't take), the game resulted in death after death after death. It always allowed me to try again, but I couldn't quite figure out what I was doing wrong. Finally, I turned it on to the easier difficulty, and the game gave me the chance to skip the segment I'd been messing up to keep going. Even then, it didn't become clear what I'd been messing up, but it was nice to be able to advance and see the rest of the story. After all, this is a story with some clever twists and turns and fascinating characters, and you'll want to see it through until the end—and when you get to the very end, you may want to play it through several times to see all of the ways the story can play out.

Also read about: The Fastest Way to Complete Your Research Level 10 Pokédex in Pokémon Legends: Arceus

On top of the unique and challenging gameplay that tests your wits, and helps you build upon your knowledge, it's presented gorgeously as well. The unique monoprinting visual style looks so fresh from start to finish, with bold characters that are positively full of life, and stunning locations with compositions reminding me of beloved Van Gogh paintings. The music is also especially evocative, pulling you right into that time period and making you feel like you're at the card table alongside the characters. 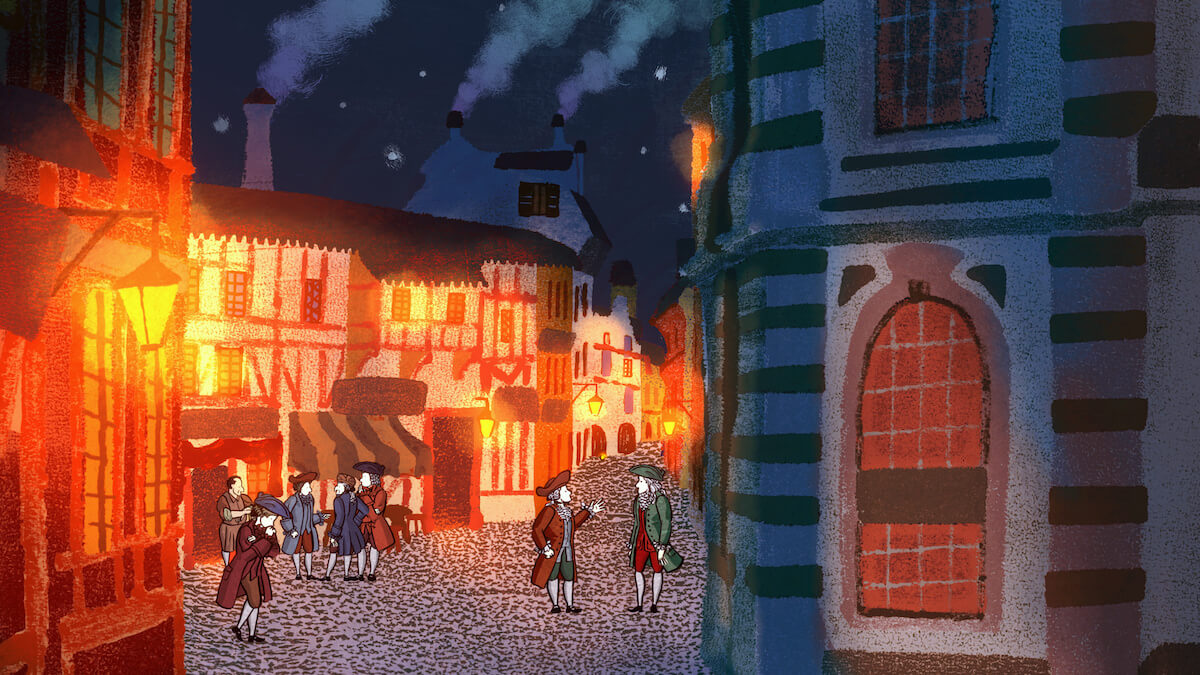 I loved learning every trick, feeling like each one wasn't just a small skill I'd learned in a video game, but something that might actually apply to real life. There was huge satisfaction in new discoveries, and successfully pulling them off—and when something didn't quite click with me at first, I really enjoyed chipping away at the problem until it did.

If there was one part of the gameplay I didn't love it was the quick time events, which ask you to suddenly push certain buttons in sequence before the time runs out. While this does make sense in the context of the game—you have to perform certain hand movements quickly in order to avoid detection—I'm just bad at them, and even when the symbols were generally laid out like they are on the controller, I've never found the placement of A, B, X and Y on Nintendo controllers intuitive, so I always messed this up.

But that didn't take away from the joy of the game and uncovering its story. I also intend to return to the game before long. Along the way, I must have missed something important, because in my list of a total of 28 strategies in the game, I'm missing one.

Basically, I've never played anything like it—and after playing it, I'm going to be paying much closer attention to the table every time I sit down to play a card game

Card Shark is out now for Steam and Nintendo Switch for $19.99.

Looking for a game you can play with a friend? Click HERE to check out all of our favorite co-op games on the Nintendo Switch.