You Won't Be Able to Put Down Carley Fortune's Bestselling Novel, Every Summer After

When Canadian journalist Carley Fortune decided she was going to write her first book, she decided to base it on her happy place—the lake.

The result was the stunning debut novel Every Summer After, the perfect summer romance revolving around two best friends, Percy and Sam, and set in Barry's Bay, Ontario, Canada. It's a friends-to-lovers tale filled with flirtatious moments that'll leave your cheeks blushing and your heart soaring. Even though the two know they're meant for each other, built-up emotions and the fear of losing each other get in the way. With their love shattered, Percy leaves Barry's Bay to pursue a different type of life, but even a decade later, a weekend back in the bay together might be all the time she and Sam need to fix what was broken. 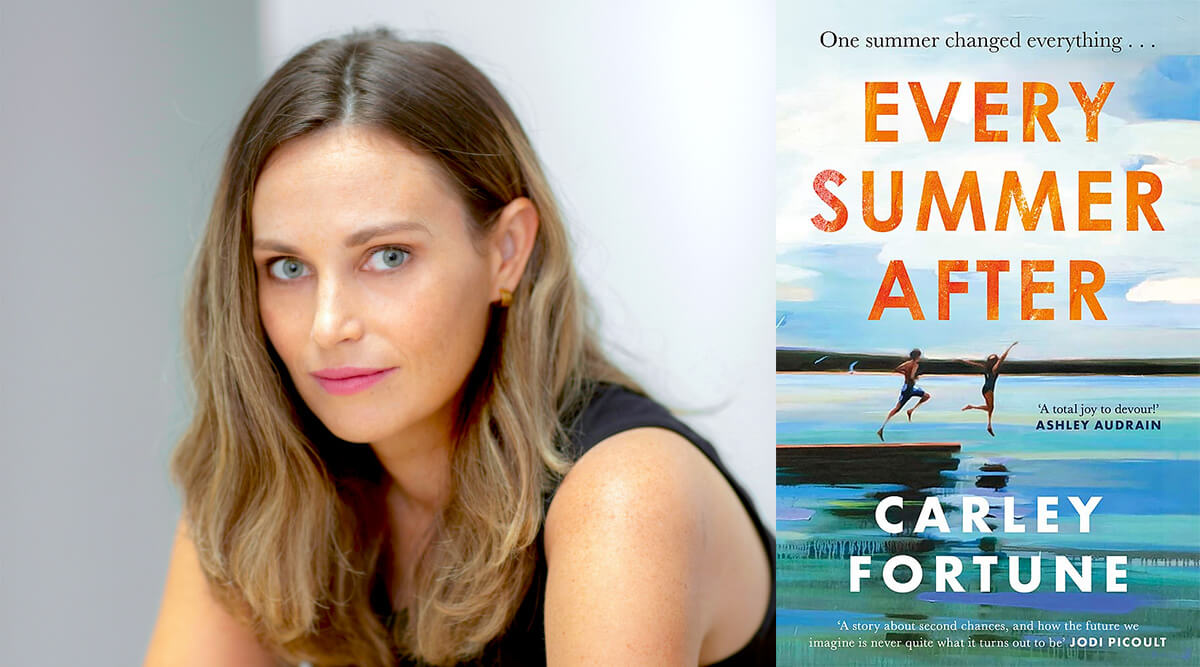 Carley Fortune has created a beautiful story on these docks, built on reminiscences of her own childhood memories, filled with all the ice cream, friendship bracelets and the most beautiful blue water you can ever imagine. Every Summer After was an instant hit, quickly making her a New York Times bestselling author, and her next novel, Meet Me at the Lake, drops in 2023. We can't wait to soak up its story, but in the meantime, we got the chance to learn more about the author and what makes her tick.

"The only character who's inspired by a real person is Percy's hairstylist, June, who's referenced in Chapter One. (She tells Percy that breakup bangs are a very bad choice). My stylist here in Toronto is June Croken—she's fabulous and very opinionated."

2. Her love for Barry's Bay sparked the idea for her first novel.

"The setting of Every Summer After came first, and the characters developed from there. I grew up in Barry's Bay, where the book is set. Our house was in the bush and on the lake, and my parents owned an inn and restaurant, where I worked as a teen. My initial idea was to have Percy grow up like I did, but that felt too close to my life, and I didn't want to write my own story. So I gave Sam my background, and made Percy the cottager, coming back to the lake for the first time in over a decade, wracked with guilt and hoping to make things right, although lacking a plan for how to do that. I knew as a girl that Percy was struggling with bullying. I knew she was overly concerned about what people thought of her, and a bit sheltered. I'd read my childhood and teenage diaries a few months before writing Every Summer After, and I was struck by how lonely I felt and how much I longed for someone who really understood me (preferably a boy). I wanted to give Percy the person I dreamed of. Developing Sam was about figuring out who would be the exact right friend for Percy—someone who really saw her, who knew himself, someone she could laugh with and tell secrets too. And all the secondary characters spun out from there."

3. Her style and urge to write have changed plenty throughout the last two years.

"I wrote Every Summer After in 2020 when I was working full-time and pregnant with our second child. So back then, I'd set my alarm for 5 a.m., fix a coffee and grab a Lara bar and start writing before my son woke up and before I started work. I left my job as executive editor of Refinery29 Canada last fall and now we have a second child, so writing my second novel, Meet Me at the Lake, looks different. I write during the workday while my husband takes care of the baby. I never used to write with music, but the boys aren't quiet, so now I often put my headphones on and play something that suits the mood of the book. Meet Me at the Lake is infused with music, and I think that's one of the reasons why. In September, all three boys will be out of the house all day, so I'm sure my routine will change again.

I try not to read before I write—I've learned the hard way that it's a recipe for feeling bad about my own work. If I'm stuck, I'll go for a run. Running has become part of my writing process—it helps me clear my head, shake off the cobwebs and I often come up with ideas without actively trying to."

Also read about: Here's Everything You Need To Know About Through My Window Author Ariana Godoy

"It's a love story about Fern and Will, who are brought together in their early 20s through a chance encounter that spirals into a daylong adventure in the city. They have an obvious connection, share their secrets and make a promise to meet one year later. Fern shows up, but Will doesn't. Cut forward 10 years later, and Fern is back home, running her mother's lakeside resort (the last thing she ever wanted to do) and, in another twist of fate, Will shows up with an offer to help. Will is probably the only person who truly understands what Fern is going through, but she's reluctant to trust him, and it's clear he's hiding something. But 10 years ago, Will helped rescue Fern, and now she must decide if she can do the same for him.

Like, Every Summer After, it's told in dual timelines. In the past, we spend the day with Fern and Will in Toronto—a day that changes both of their lives. And in the present, we are on the lake at Brookbanks Resort, watching Fern and Will try to manage their past and their feelings. It's an emotional romance with a bit of mystery, as well as a story about Fern's relationship with her mother and her best friend."

"I'm not sure how I grew up on a lake without managing to wrangle a jet ski ride. Every summer, we spend a few days with my best friend and her family at their cottage. And this year, they bought a jet ski, so her husband took me out. We took the kids tubing behind it and then he and I went on an epic tour of the lake. A life goal achieved!"

6. The advice she'd give her younger self is to simply write.

"I loved creative writing more than anything as a child, but I had this idea that you couldn't make a living as an author, and I was concerned about money from a young age. I studied journalism because I adored magazines and went to work as an editor—there were very few staff writing jobs, and again, I was concerned about income, so I chose the editing path. I wrote a few pieces here and there as time allowed, but it wasn't until a boss of mine, Christene Barberich, told me explicitly that she thought I should write—that I had something to say and that I should do it for myself, not for my job—that I felt like I had permission to do so. The first thing I wrote was a letter to the daughter I'll never have. At the time, we had just the one boy, and were debating about whether to try to have a second child. I felt certain that if we did, we'd have another boy. The letter helped me work out some of my feelings and let go of a future, a person and the mother-daughter relationship I'd imagined. Maybe that's why I wrote about a mom (Sue) bringing up two boys in Every Summer After. I became pregnant with our second while writing the book, and as I predicted, the baby was a boy."

7. People who manage big creative careers on top of family inspire Carley the most.

"I admire the work of so many authors, but I get particularly excited when I see those who are managing big creative careers on top of family. It makes me feel less alone, and that a creative life can exist alongside a messy family life. We have this image of the lone artist, but so many women are caregivers, whether that's caring for children, aging parents or other family members. We need more models of this."

Also read about: Get To Know Author Julia Spiro and Her New Book, Full

8. If she could send her book to anyone, she'd send it to her grandmother, Hazel, who passed 11 years ago.

"I have three new ones: Somebody Somewhere, Hacks and Bridgerton."

Also read about: Author Tay Marley Talks The QB Bad Boy and Me and Its Movie Adaptation Starring Noah Beck

10. Carley's advice for all writers: Read.

"What I'd tell an aspiring fiction writer and a journalist would probably sound a bit different, but I think one common piece of advice would be to read. It sounds like a no-brainer, but I don't think it is. You need to read widely to understand what you like, what you don't and to develop an ear for pacing, plot and good dialogue. Or in the case of journalism, an ear for structure, clarity and good quotes. For those hoping to work as an editor at a magazine or a digital media brand, you need to read to understand the competitive landscape and have a clear understanding of what makes a story right for one publication and wrong for another."

11. She also believes it's super critical to give yourself time.

"As both an editor and an author, I hear from a lot of amazing people in their 20s who are worried they don't have their life together, or that they aren't in the place they hoped they'd be. I worked as an editor for 16 years, and for the last four of them, I felt like I wasn't in the right place. I'd worked so hard to get to the top of my field, but when I arrived, I wasn't happy. I had no idea what was next for me, and it made me so anxious. But it's almost impossible to know where life will take us. Three years ago, I would never have imagined that I would have a published novel or would be writing fiction full-time. As Sue says in Every Summer After, life, hopefully, is long. I feel like in my late 30s, I'm finally getting closer to being the person I really am. Give yourself time."

Can't get enough of great romance? Click HERE to learn all about Roma Corden's Bewitching a Highlander.