I Visited L.A.'s First Cat Café and It Purrrfectly Met My Expectations

Anyone who knows me knows I am most definitely a cat person.

Ever since dinosaurs roamed the earth, furry little felines have been my favorite animal. I kid you not, my mom would dress me up in cat shirts from Old Navy all throughout my younger years so I could express my love of cats to the world. So when I heard there was a cat café opening in Los Angeles, I knew I had to visit.

I dragged my dog-loving co-worker Brittney along with me to Crumbs & Whiskers to experience all the adorableness their café had to offer. Believe me, it was any cat lover's dream.

Upon arriving, we were greeted by friendly employees adorned in cat ear headbands who hooked us up with some delicious coffee and tee drink and told us the house rules. 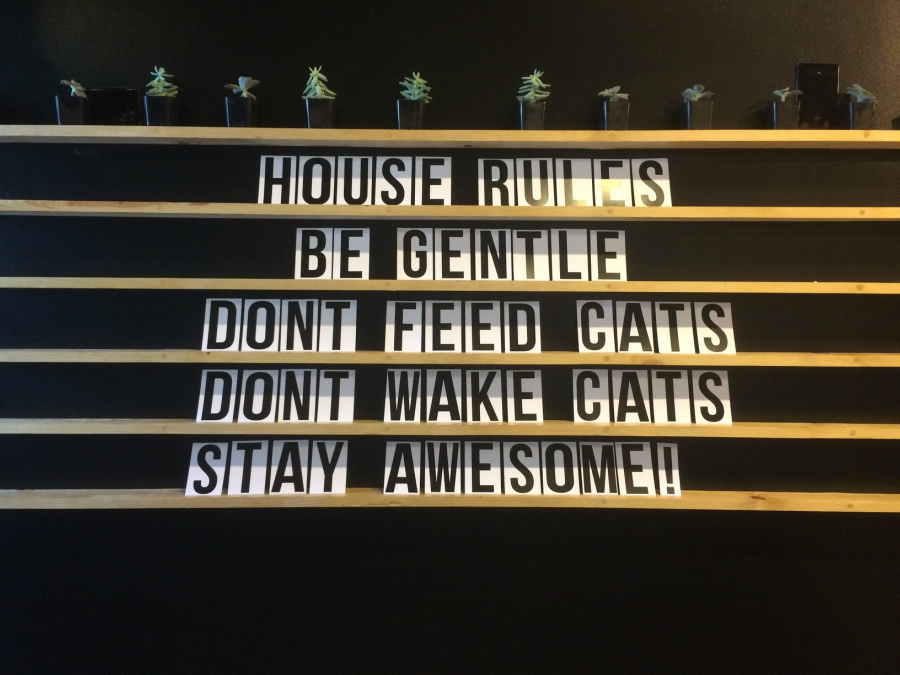 After learning what we should and should not do, we were free to roam the space as we pleased.

The whole layout was incredibly aesthetic, so I acted accordingly and took plenty of pictures that I will be sure to post later on my Instagram. 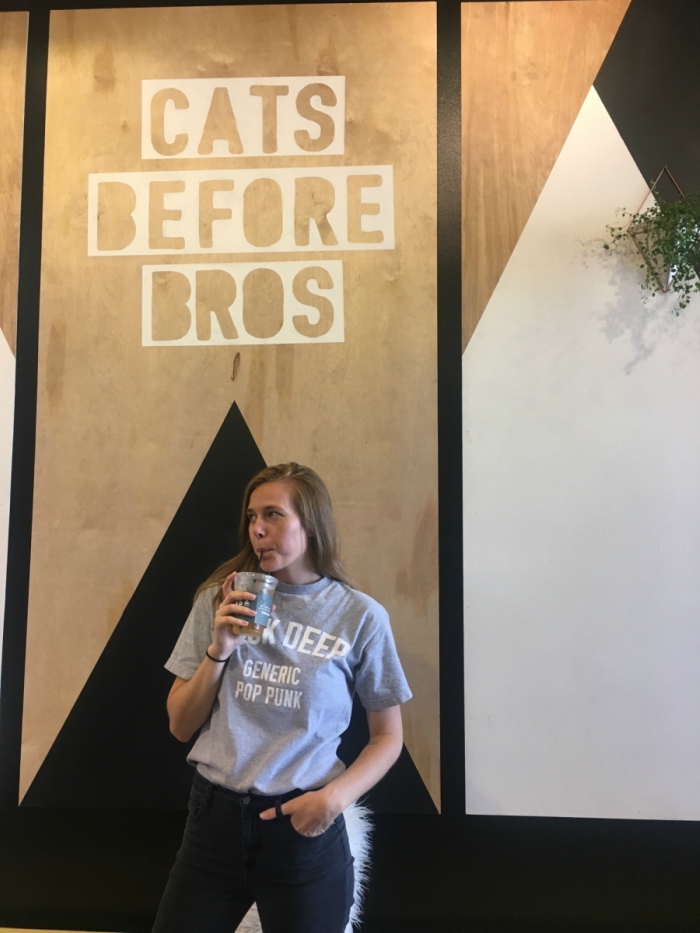 But let's get to the part where I tell you all about the most exciting part of the whole café—the cats!

There were 14 felines meandering throughout the area, all of which are available for adoption through Karma Rescue. Brittney and I were lucky enough to witness a cat named Grover find his forever home while we were there. Happy tears definitely happened.

After seeing that touching heartfelt moment, I made my way over to some cats to introduce myself and get acquainted. I don't mean to brag, but let's just say I made plenty of new feline friends.

The first little fella to catch my eye was an orange and white cat named Wacko. He was very rambunctious, so we had a little play time with a cat toy.

Once he had tired of the game, he took a seat on a ledge and, well, the picture just speaks for itself. C'mon, have you seen anything cuter?! 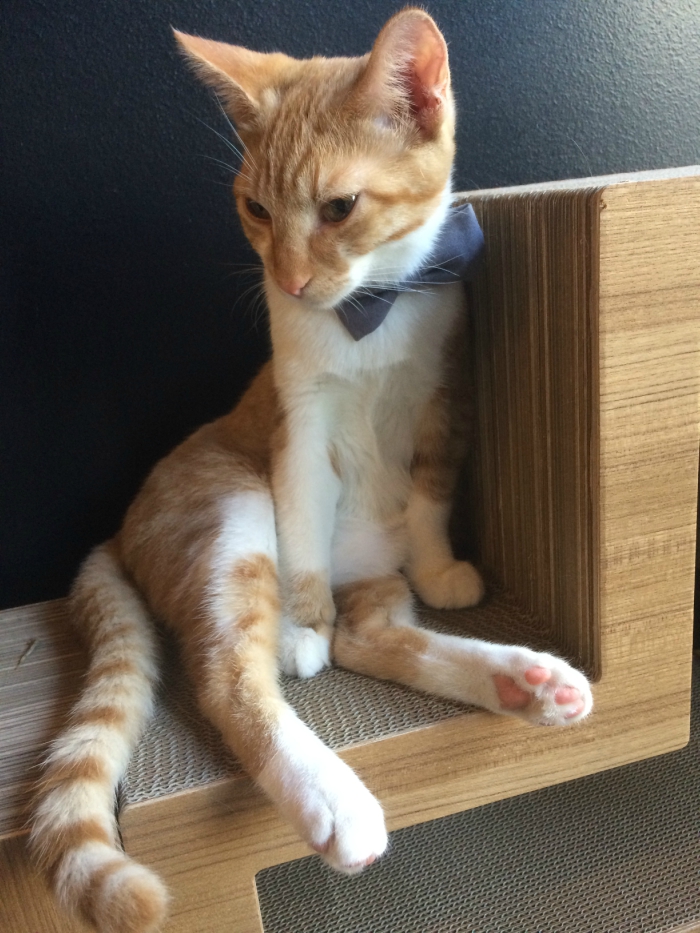 Next we played with Wacko's best friend Jacko. He was just as mischievous as you'd expect.

Not to let his buddy have all the fun, Wacko joined his pal to bat at a mouse on a string for quite some time. Cats, so easily entertained. 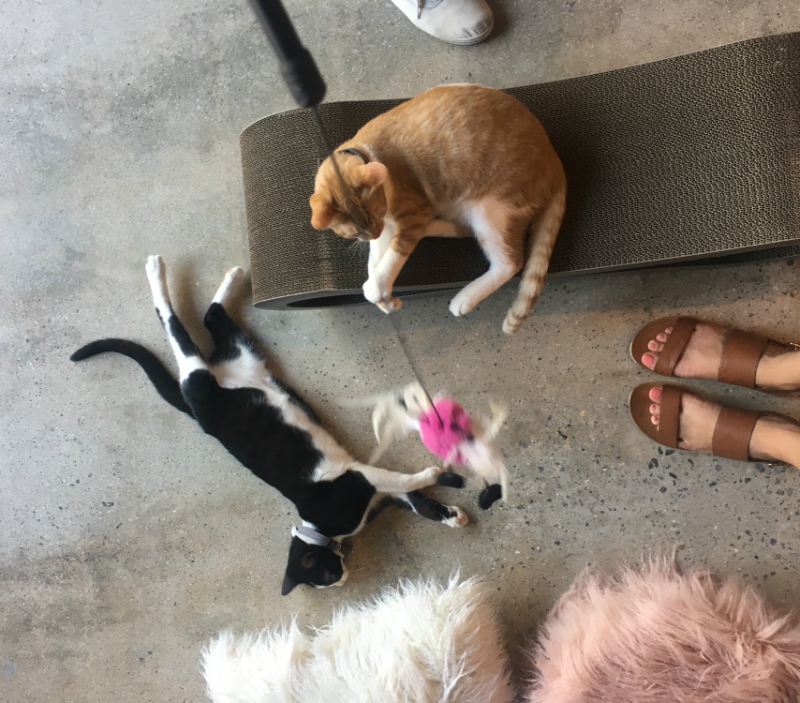 Brittney, who claims she is a dog person, had a major moment with a cuter-than-words kitten named Tiffany.

Britt and Tiff shared a loving embrace, which melted everyone's heart. She may say she would choose dogs over cats any day, but I'm positive Tiffany converted her to a cat person. How could you not become one after cuddling this cuteness? 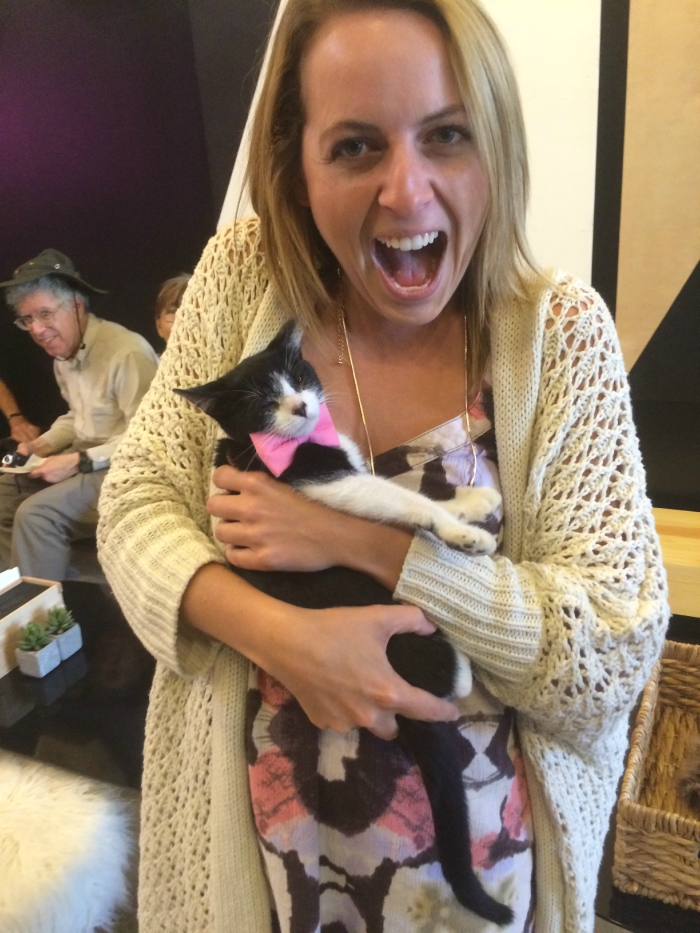 My heart, however, was stolen by a three-legged tabby named Tigress. She was too cool for school lounging about while she waited to get the attention she deserved.

While kittens are darling, I've always had a soft spot for older cats. And Tigress noticed. I chilled with her for a bit, giving her all the pets, because what else was I to do? 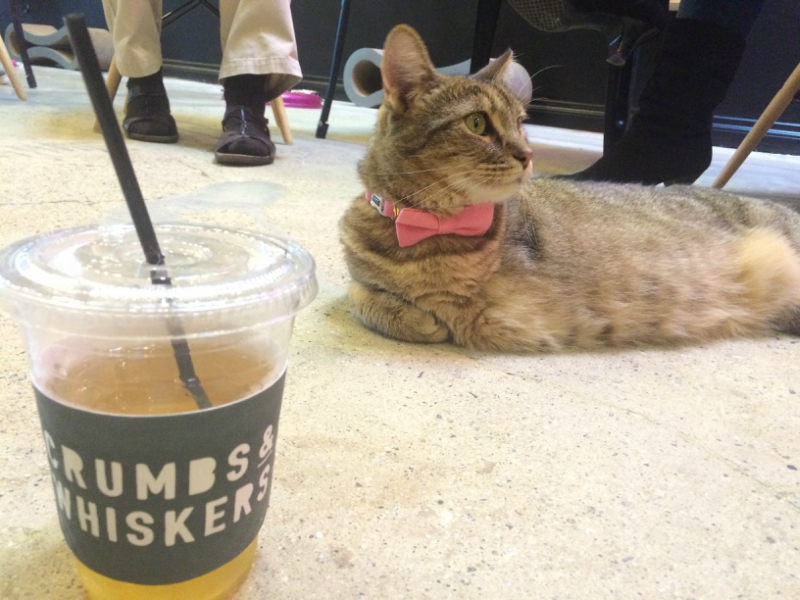 After partaking in the full café experience, the greatest thing of all happened—a kitten party!

Basically all we did for an hour and a half was play with spastic kittens. It. Was. Heaven.

Brittney captured this precious minute I shared with a black and white kitten named Glenn after he unexpectedly jumped into my lap. Clearly you can tell this was the best day of my life. 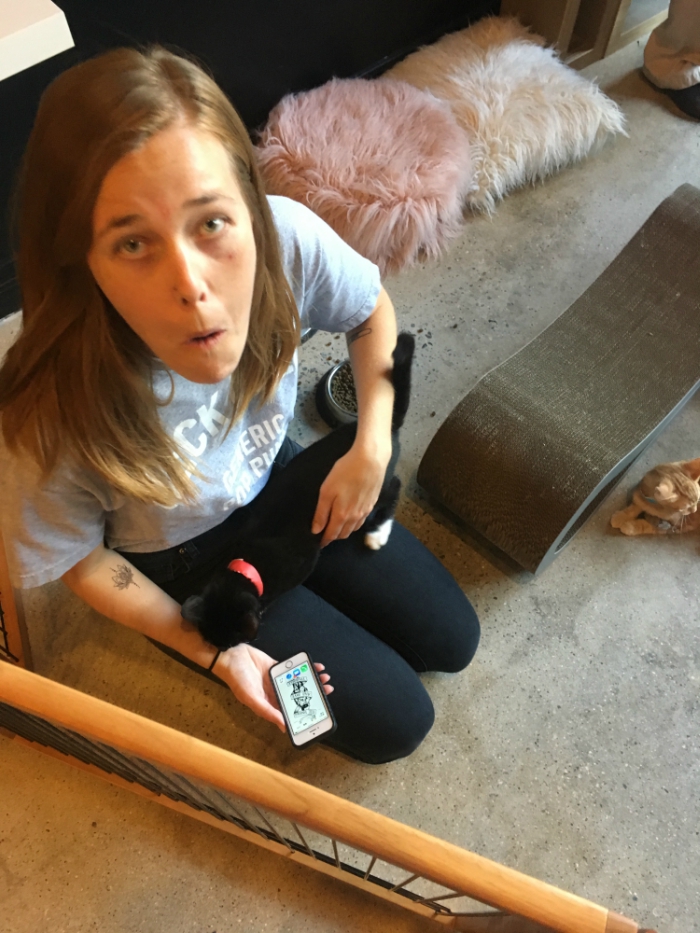 I spent the rest of the time being surrounded by kittens darting across the room as they played with every toy in their path.

Other than my homeboy Glenn, I made a few other kitty friends named Sam, Clover and Lando. Lando wasn't shy when it came to crawling all over me like a jungle gym, but I wasn't about to make him stop. 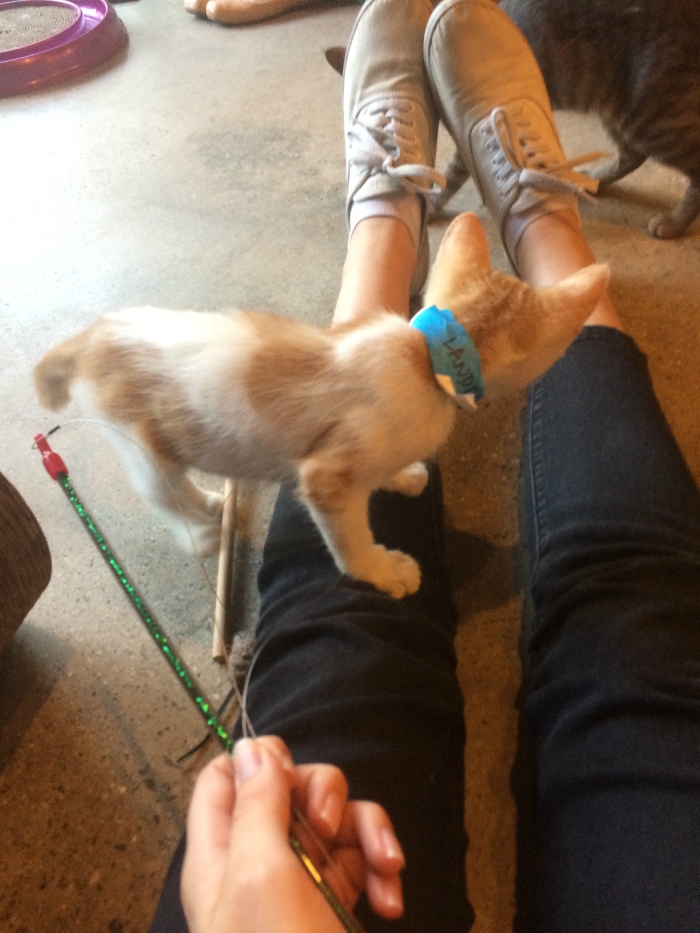 Once the kitten party had ended, I made sure to say my final goodbyes to Tigress.

I will never forget this sweet farewell I shared with my fave cat. She gave me a little bump on the nose and then I went on my way. 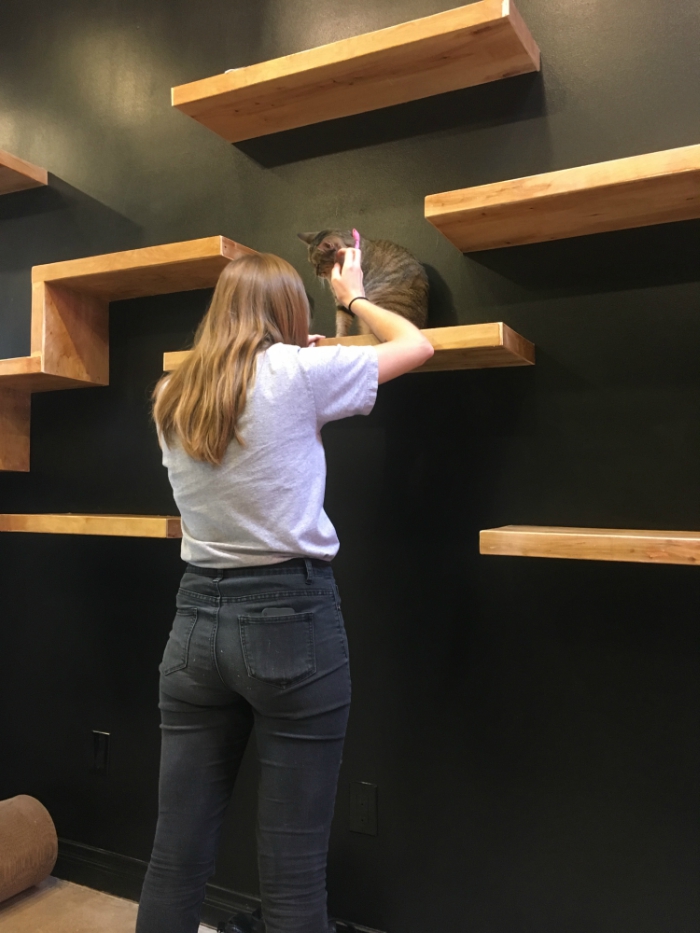 I was so sad that my day at Crumbs & Whiskers came to an end, but you can bet anything I will be making my way back there once the café is officially opened.

If you're looking forward to attending this cat café, make sure you follow them on Insta to get all the latest details.

You're probably a crazy cat lady like me if you read this post, which means you'll relate to THESE 15 too relevant truths for cat lovers.