While I don't necessarily believe in fortune telling, I rarely pass up on an opportunity to see what my horoscope, runes or cards might have in store for me.

I'm even more tempted when it's presented to be in a super-cute package. So when the team at Chronicle Books asked if I'd be interested in checking out an upcoming deck of adorable Cat Tarot by artist Megan Lynn Kott, I knew I had to check it out. The cards don't officially come out until April, but I was able to get my hands on them early, and they're even better than I'd imagined.

The Cat Tarot deck consists of 78 tarot cards, each featuring an original hand-drawn illustration by Megan Lynn Kott. But just because the deck is packed with cats doesn't mean it deviates too much from other occult tarot decks. It contains the 22 Major Arcana cards and the 56 Minor Arcana cards you'd find in other decks, just with carefully thought out feline scenes in place of the traditional symbols.

In addition to the cards, the deck also comes with a handy guide book written by writer and editor Julia Smillie, complete with an introduction and plenty of information on how to actually read tarot. In essence, it contains everything you need to start pulling cards and seeking some supernatural knowledge. 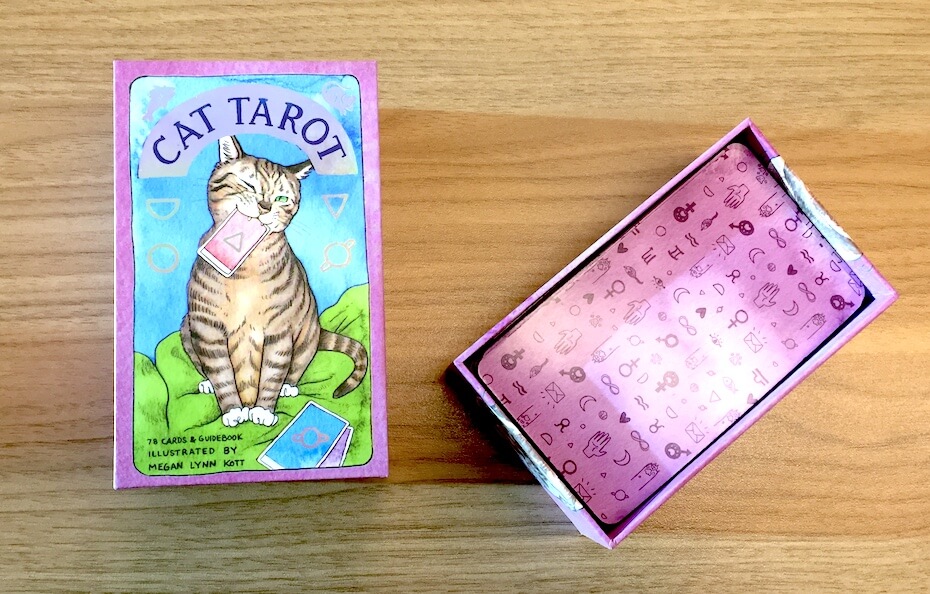 As soon as I opened the Cat Tarot deck, I was eager to rifle through each and every one of the illustrations on the cards, with each one appearing more delightful than the last. While some decks can have pretty boring suits cards that simply feature some swords or some cups on them, every one of these cards features something adorable happening.

As I looked at all of the images, I also started to see some patterns among the beautifully water-painted drawing on the cards. While the swords cards all seemed to gravitate around kitty claws, the cups cards dealt with water dishes and food bowls, while wands cards featured playthings and pentacles cards were adorned with treats and toys. 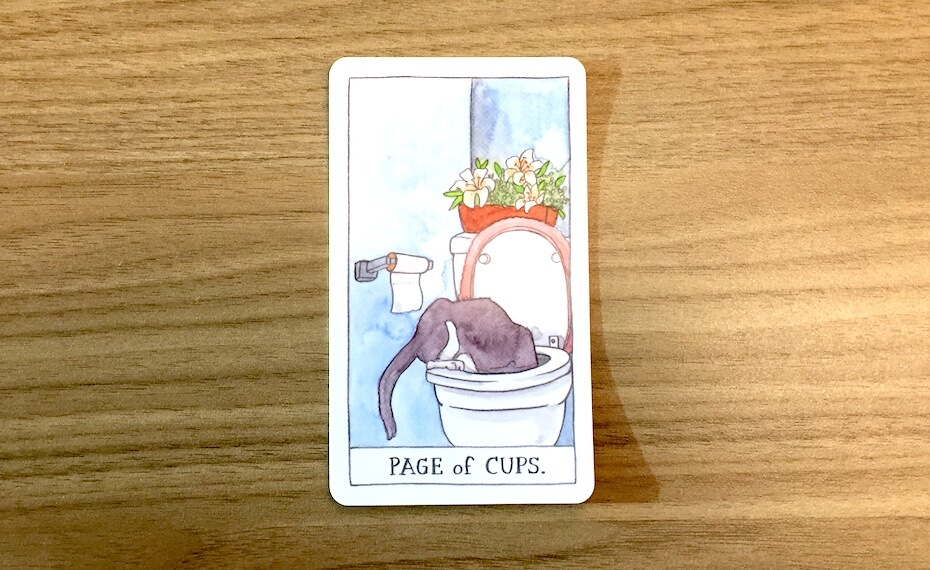 But my favorites were the ones that toyed with some of the more foreboding-sounding cards in a traditional tarot deck. The Death card is hilariously adorned with a vacuum cleaner, which fits the meaning of the card so much better than a spooky grim reaper ever did. The Devil card features a smiley golden retriever—because of course it does. This sense of humor is present throughout the 78 cards, making the deck worth it for the art alone.

Of course, a tarot deck is so much more than a stack of pretty pictures. I'm no tarot expert, so I decided I'd need to at least skim the guide book before I tried to read my cards, and I was really glad I did. The 108-page book is really thorough for a little booklet that fits inside the box with the cards, and not only is it densely packed with wisdom, but it's pretty accessible too.

It begins with an explanation of why a cat tarot deck exists in the first place. Since many people share the belief that cats are ultra-perceptive, with a special ability to see what we can't, it's pretty fitting that they're the stars of this divination tool.

The guide also gets into the difference between Major Arcana cards and Minor Arcana, or suits, cards (which I'm a little embarrassed to admit I didn't already know) and the meanings of the four suits before it explains different methods for conducting a reading. It includes not just hints for interpreting the cards, but also seven different spreads for doing so. While you're free to do simple one, three of five-card spreads, the Celtic Cross and Tree of Life spreads include 10 cards each and can help you divine very specific questions about your life, as long as you have the time and the patience to learn their meanings.

But most of the little book is dedicated to the meanings of the cards themselves. Julia Smillie did an incredible job tying in the significance of each card in with cat-inspired descriptors, making them each as understandable and insightful as they are cute. Each contains both the upright and the reversed descriptions for the most accurate reading of whichever spread you choose.

For my first in-depth reading, I decided to select a five-card spread, playfully nicknamed "the paw" in the guide book. I kept my question in my mind while I selected five cards, and then flipped them over one by one in a single file line. My spread showed the end of hard times in my past, the dangling of a potential opportunity in my present, an undercurrent of harmony in my relationship, advice that something that looks too good to be true probably is, and the promise that hard work in my future will result in success. It was a lot to take in, but I truly did feel like it gave me some insight into my situation. And it helped that the cards were so precious, too. 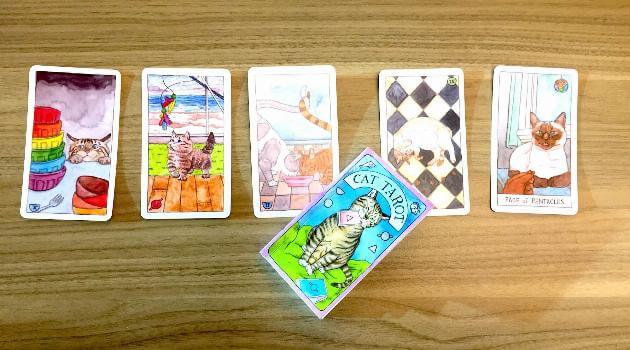 As long as they love cats, both seasoned tarot readers and new fans will have something to love in Cat Tarot. They'll be available for $19.95 once they're for sale on April 2—and while the illustrations alone are worth the price, the included guide book pushes it above and beyond to become a real steal. If you've ever wanted to know more about tarot, it makes for an amazing introduction to identifying and reading the cards. With this deck, you'll know your wands from your cups, pentacles and swords in no time. 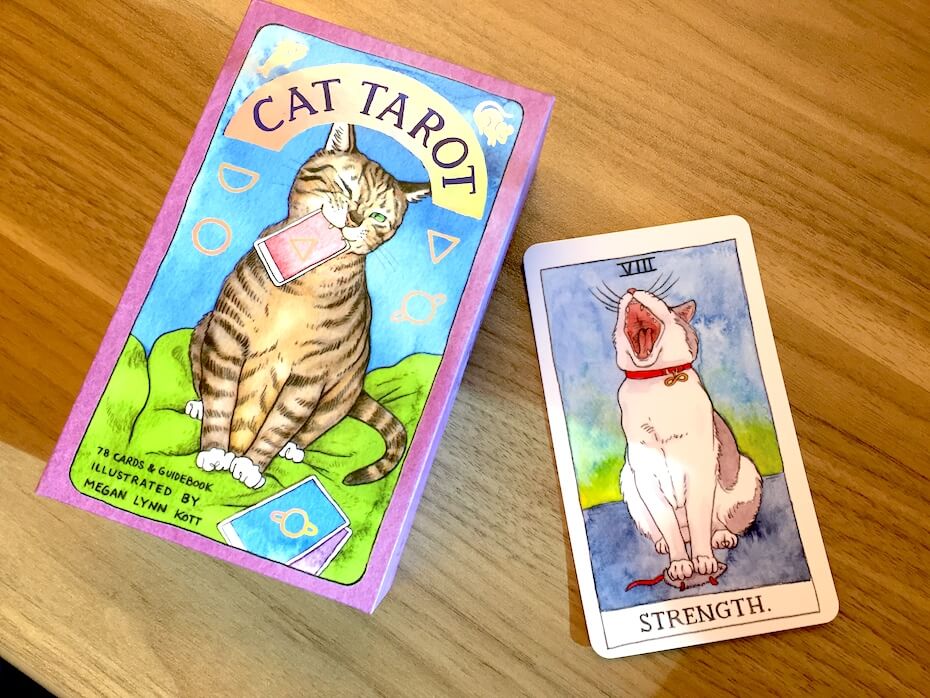 Can't wait for this cat-themed deck? Click HERE for our beginner's guide to tarot card readings.